Day nine began with much optimism.  Rocket had been running flawlessly the entire trip.  With the exception of having to change the exhaust gasket after day one, I had made no repairs.  I checked tire pressures and oil levels almost every night and all was good.

Early in the day there was a discussion regarding a bridge out of service that was on the route.  I planned a different route, not knowing if I had missed it or not, but the route was the fastest route according to Google.  Ken left early and called me to tell me where the bad bridge was located and I found that my new route missed the problem.  I shared my route with others remaining at the hotel and it turned out to be a good one.

The run was going very fast and smooth until we crossed into Arkansas, where the speed limit dropped from 65 to 55.  Not wanting to stand by the side of the road for thirty minutes with Arkansas' finest, I slowed a little.  But after a while, I sped up where I was certain of a clear road.

Gas stations appeared to be plentiful and I refueled quickly twice before Check Point three in Hope, Arkansas.

During the day I began smelling oil more than usual and the variator began making noises at slow speeds.  I knew it would have to be attended to that night but hoped for the best for the remainder of the ride.

Around 15 miles short of Camden, it all came to an end.  The belt shreaded and I coasted to a stop.

I started to pull off the transmission cover when Ed stopped by to see if he could help.  He got out his tools to supplement mine, his were much better sorted and of higher quality.  He tried to get the bolts out of the cover and found one that balked to the point of beginning to round off the points on the bolt head.  So we were stuck.  I called Will to bring the truck, thinking that we could take it to the hotel, then I could ride back and finish the run.

But it took hours to find a tool to get the bolt out.  I called Boris who suggested an Irwin bolt extractor that worked.  Once the cover was off I found that the variator balked too.  Nobody could get it off so Mark brought over his puller and pulled it off.  Then the back plate was stuck and the puller ended up bending it getting it off.  We were finished, I thought so we went to the final group dinner downtown.  I was distraught until Bagel came over and offered me his old variator.

Doug, Old as Dirt, and I, mostly Doug, then went about installing the parts.  The rollers were tight so I borrowed an emory board from Suellen and sanded the ends down until they fit well.  I thought the old variator was fine so we reinstalled it and put the cover back on.  I rode it around a little and thought it was still rough but good enough to try again. 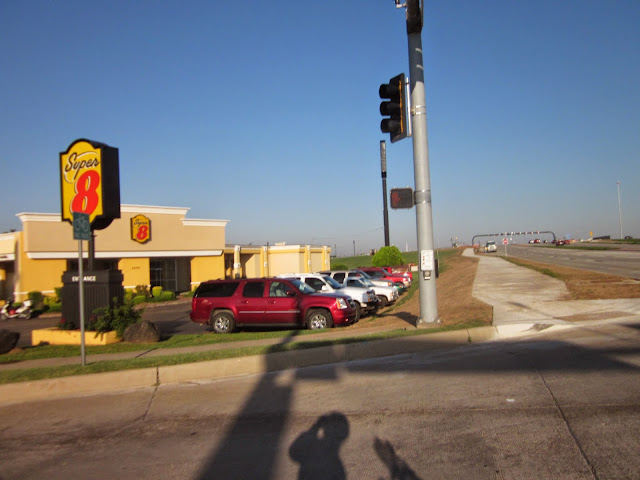 At the beginning of the day 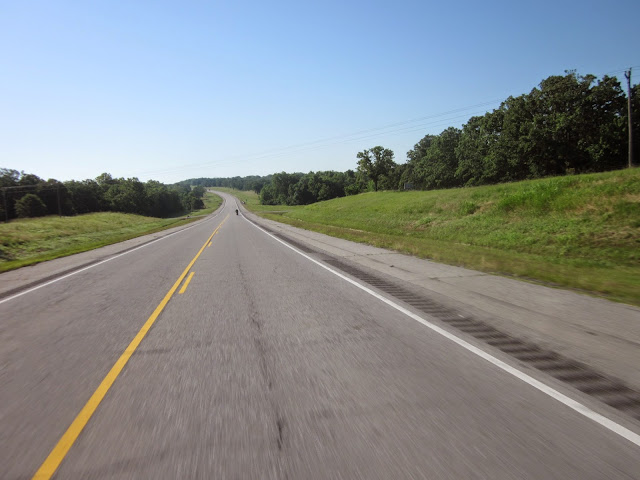 Early, along the route in Oklahoma 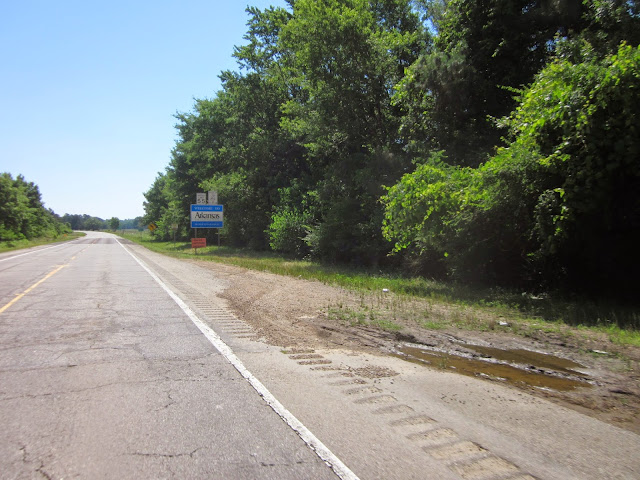 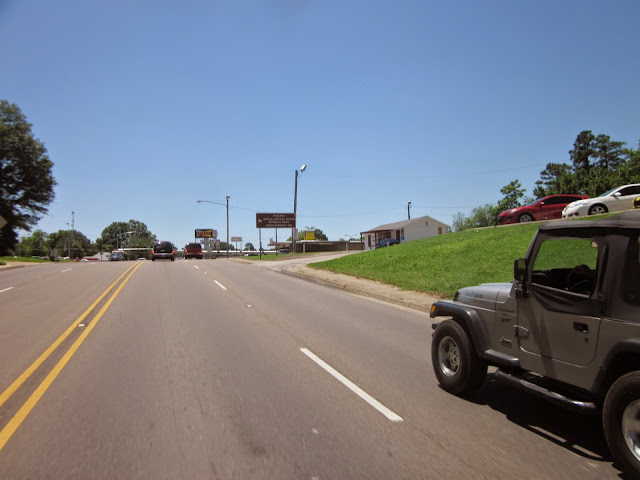 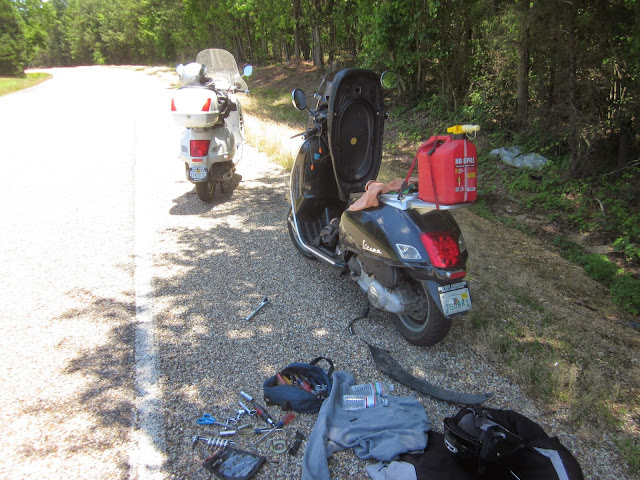 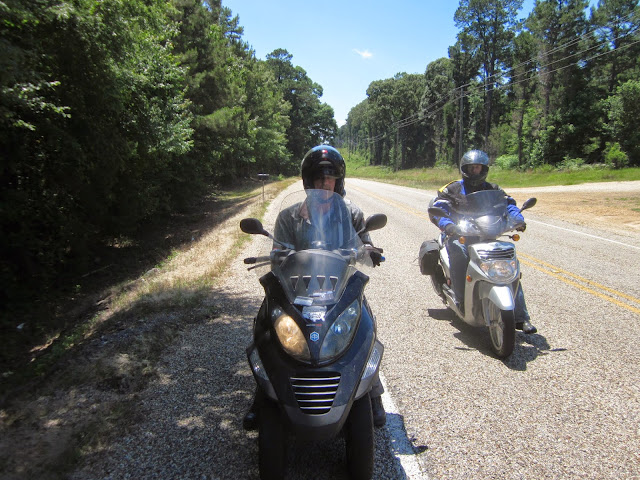 Mark and G-Man to offer assistance on the road 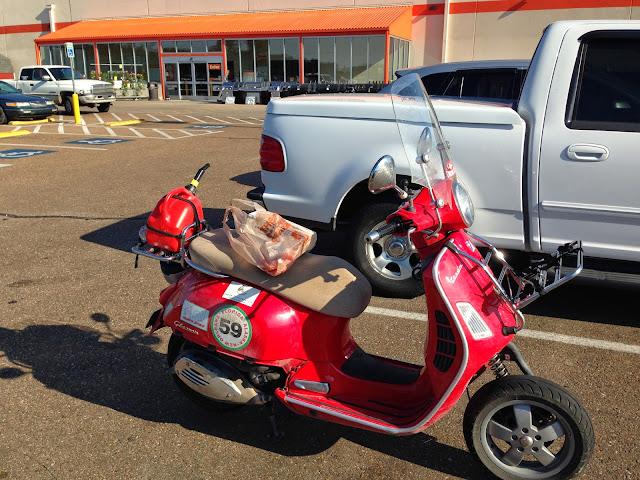 Ken kicked me in the pants to get me to fix Rocket.
I rode his Big Red to Home Depot for tools that I took back the next day. 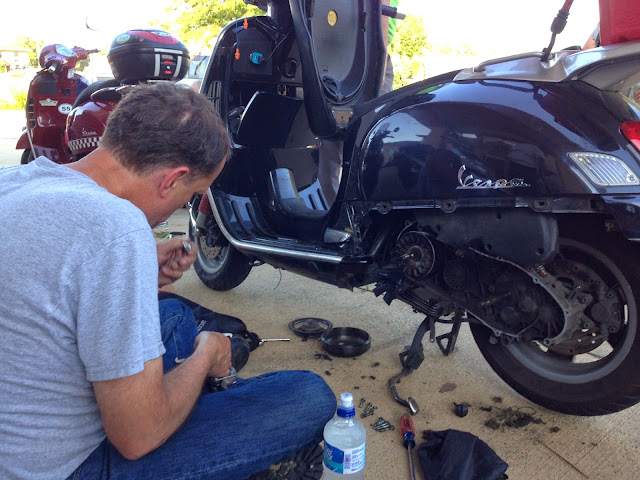 Mark and his magic puller.
Posted by Bill Leuthold at 5:22 PM