Waiting out the Storm

Late yesterday afternoon, I decided that I really needed to ride Rocket to Best Buy in Orange Park to look at cameras.  I checked the weather and it looked like I could make it.

I looked them over and headed home.  I saw the big clouds to the north and west as I turned onto Blanding Boulevard so I took Collins Road to Roosevelt to the east.  As I ran up Roosevelt, I could see that it would be close.  So just four miles from home, as I came to Timuquana Road I could feel the first wind gusts indicating it was close.  I could see the huge clouds and rain ahead, so I ducked into the nearest shelter I could fine, the McDonalds restaurant at that intersection.   I went inside and sat safely at a table and started on Facebook, telling everyone my predicament.  My friend Adam was having a similar problem in Gainesville, but at least he was at Loosey's, a bar downtown.  I was stuck in McDonalds.  Russ suggested I get a milkshake.  I looked at the menu and decided on a smoothie.  But it turns out that the smoothie and milkshake machines had stopped working at the first lightning strike in the area.

I was stuck for an hour, then decided to give it a shot.  I decided to ride up Ortega Boulevard to avoid the much larger Roosevelt Boulevard.  Ortega was flooded and I almost got splashed off the road a couple of times but made it all the way home with minimal wetness. One nice part about riding a scooter is the protection from rain and road water that the leg shield and windscreen provide. 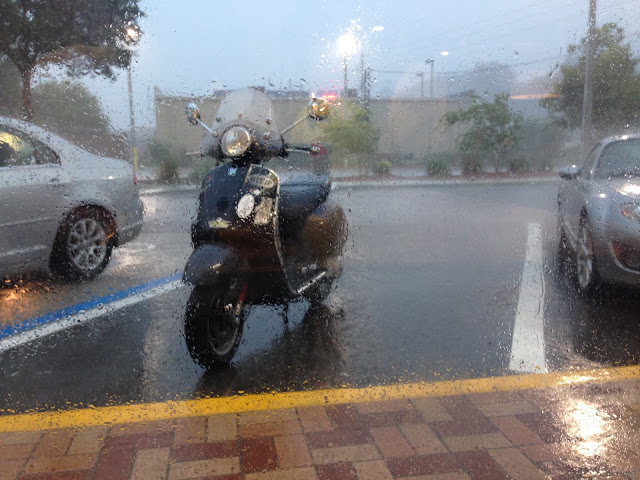 My view for one hour in McDonalds

Posted by Bill Leuthold at 4:00 PM