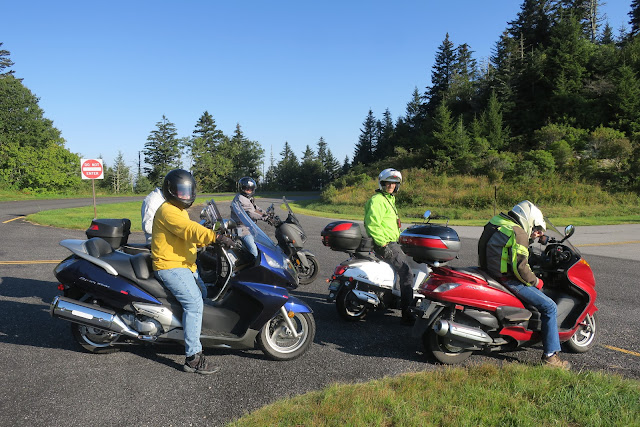 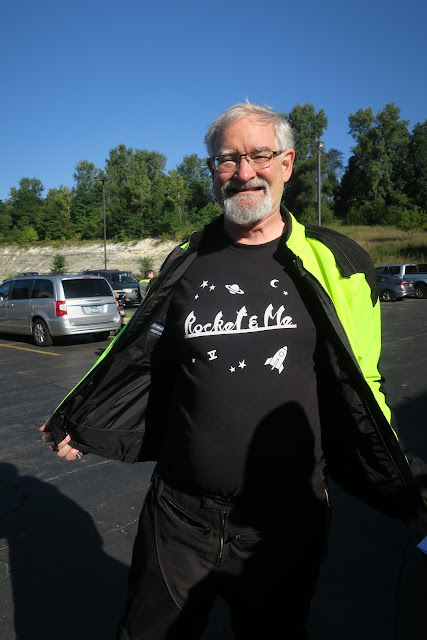 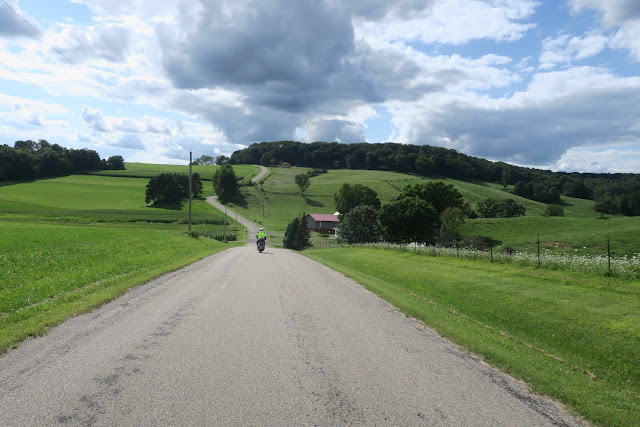 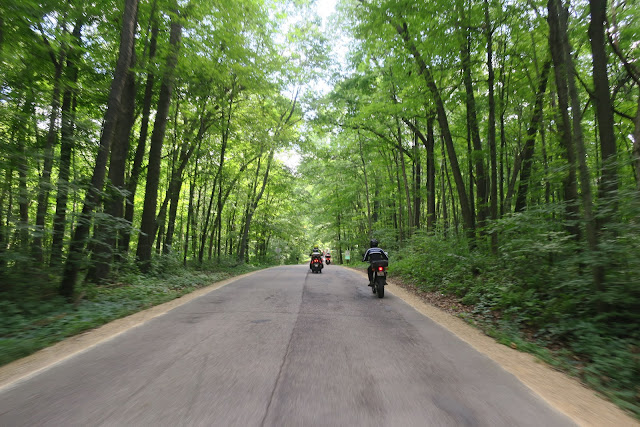 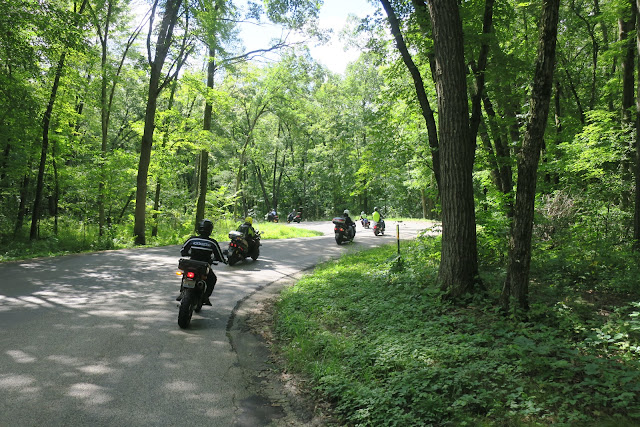 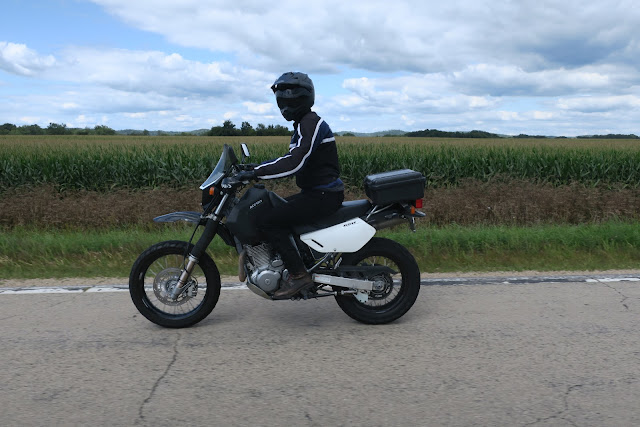 Today, Ken and I rode to Ithaca from Troy.

We caught a five minute parade in Cooperstown, then made our way into Ithaca.

It is a beautiful area that reminded me so much of the Wisconscoot rides in southwest Wisconsin.

Waiting to go get a steak dinner at Texas Roadhouse in a few minutes. 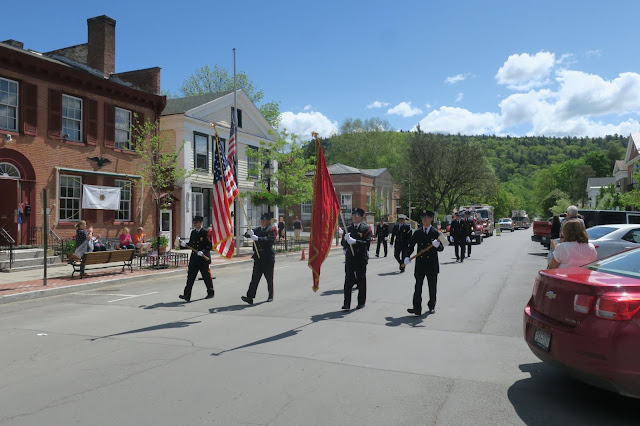 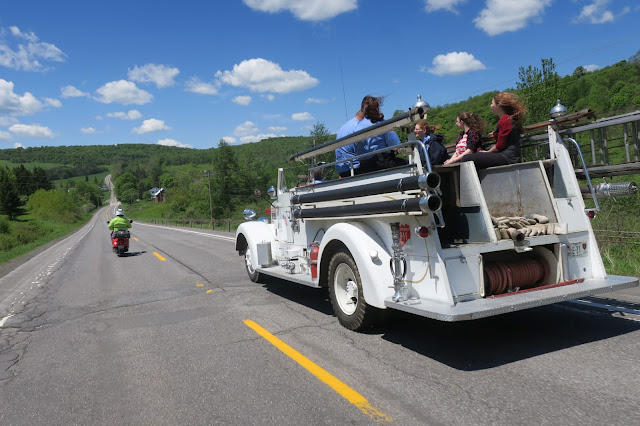 Passing one of the parade firetrucks heading to Ithaca. 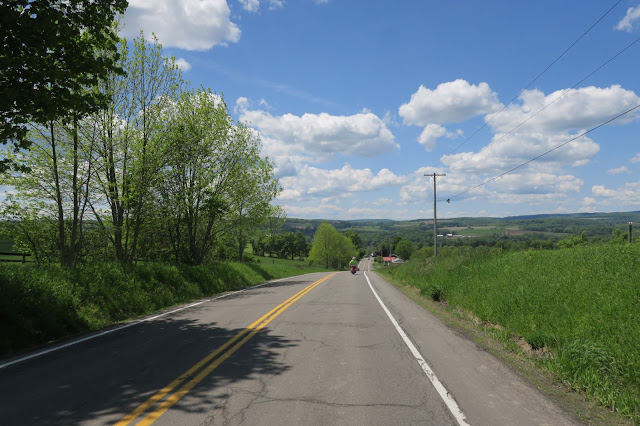 Beautiful countryside around the area. 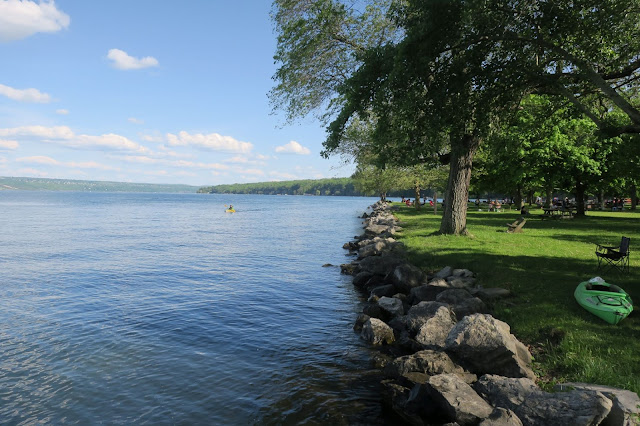 We went looking for a place to eat last night.

Our first stop was a wine shop where a nice couple was finishing their wine.

We didn't stay there but headed to the local Oyster House, where the couple arrived just after us.

We talked a lot with them and found out that they were from Miami, but had bought an old estate in Albany.

I told them we would like to drive by and they invited us for a tour.

We rode by today and they were so kind to show us the house and continue the nice discussions we had at the restaurant.

It is a spectacular piece of architecture. Very nice couple too.

Traveling is always made more fun when you can meet new friends. 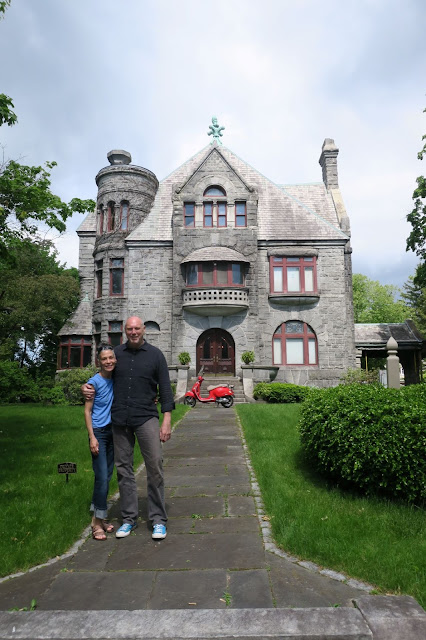 Elaine and Mike in front of their fine old house. 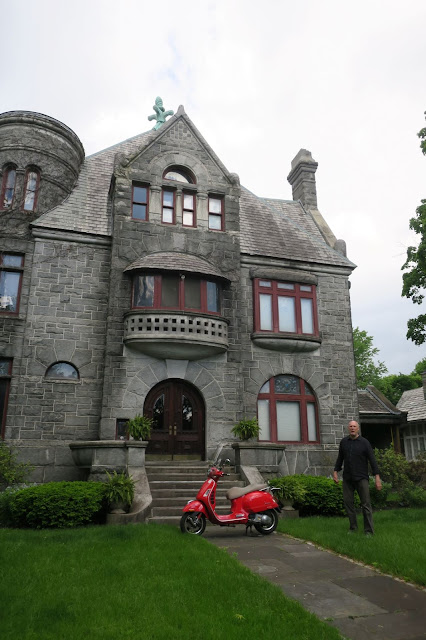 Of course, we had to have a shot with a scooter. 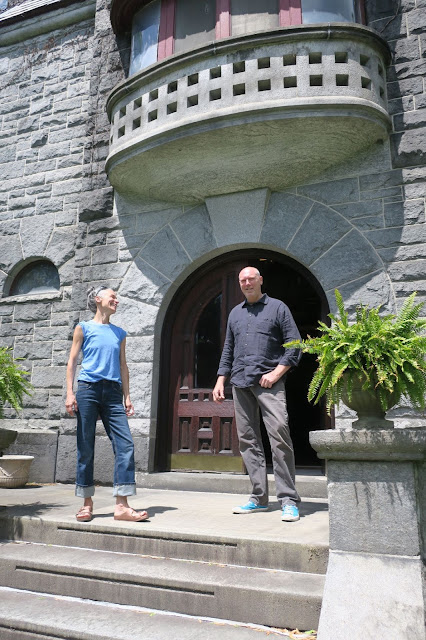 At the front door. 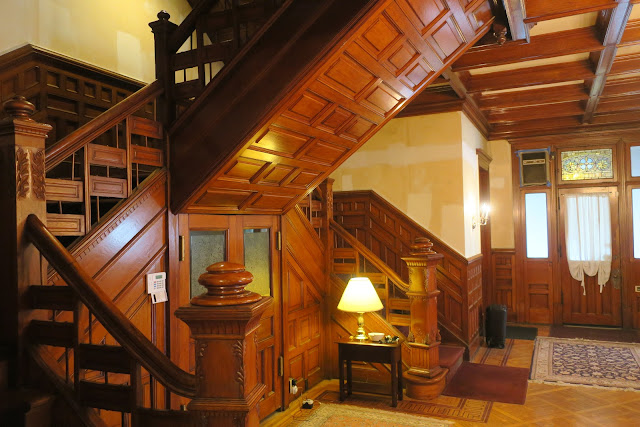 Posted by Bill Leuthold at 4:41 PM No comments:

With Kylie off to New York and Paris, I needed a pick-me-up.

So I met up with Ken in Troy, NY, where we walked thirty miles ( felt like it but was only one and a half miles) to the local oyster bar.

Had a fine dinner and conversation with an interesting couple from Miami who are restoring an old estate in Albany.

My kind of evening.

Dining on Oysters, of course, in Troy, NY.
Posted by Bill Leuthold at 4:33 PM No comments:

Sad day for me.

Probably the most time I have ever spent with just her.

I loved every minute.

Dropped her off at the Portland Airport this morning. 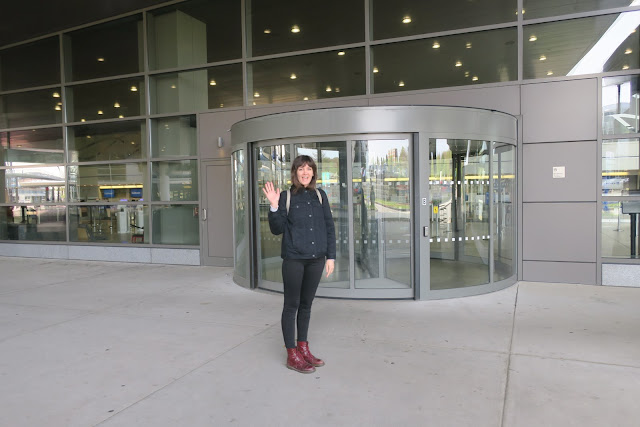 Off she goes to Paris.
Posted by Bill Leuthold at 4:31 PM No comments:

Today, Friday, Kylie and I rode from Thornton, NH, in the middle of the White Mountains, to Portland, ME.

The best part of the ride was on the Kancamagus Highway, 35 miles through the White Mountain National Forest.

It was a great road, but today it was cold and windy. 49 degrees at the pass, 22 mph winds with big gusts. It could have been more comfortable.

The remainder of the ride was uneventful, other than the wind, but we made it to the hotel in Portland at 1:00.

We heeded wbdvt's advice and had lunch at Eventide Oysters.

The server got us two each of six different oysters. They all were perfect.

Then I had the Lobster Stew. It was even better. What a fine restaurant.

We then walked around the old port area and had beer at Gritty's followed by a lobster dinner at Portland Lobster Company.

I am going to be very sad to drop off Kylie at the airport tomorrow.

But meeting up with Ken will help. 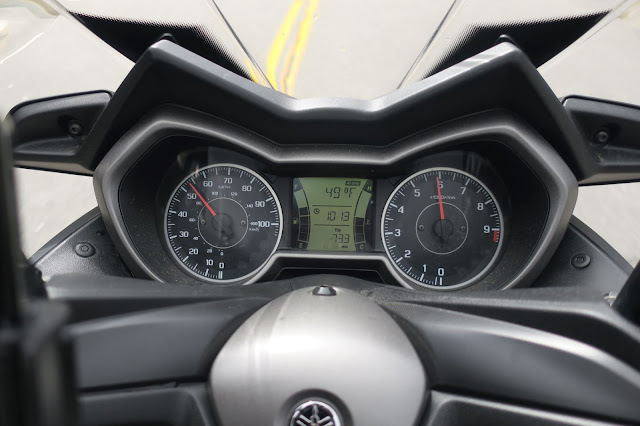 Cold along the way 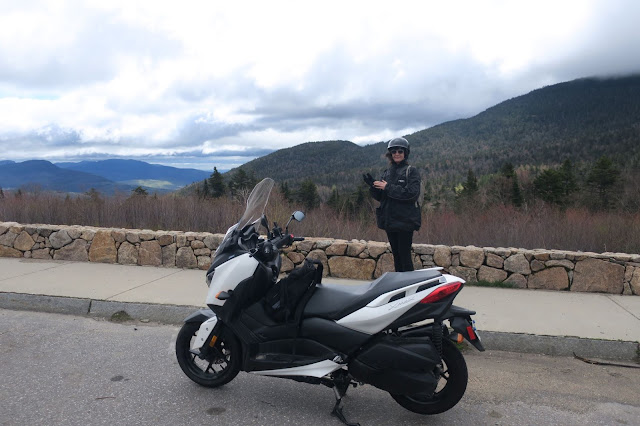 Kylie at a stop. 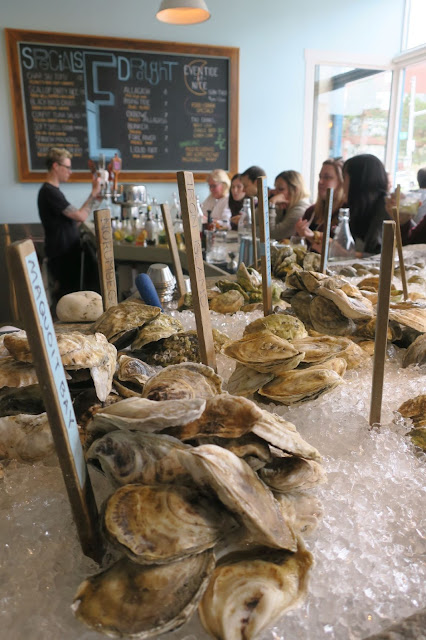 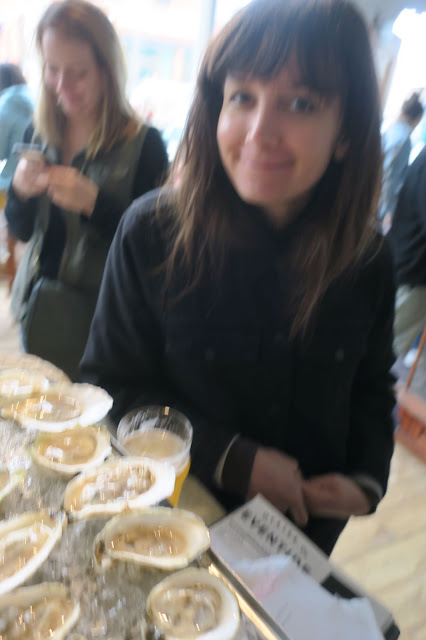 Not a good photo in general, but a good one of Kylie.
She liked the oysters too.
Posted by Bill Leuthold at 4:29 PM No comments:

Today, Thursday, wbdvt (Barry) came to visit and ride with Kylie and me for a part of our trip to Thornton, NH.

He came bearing gifts, that Kylie and I are enjoying as we sit in the little cabin motel room while it drizzles outside.

We got an early dinner and am enjoying some quiet time.

We had a good ride today with a late breakfast in a little diner in Woodstock, VT, a town I would come back to visit anytime.

After that, the New Hampshire roads were all rough with very low speed limits, so it drew out the 120 mile ride.

After checking into the little motel, Kylie and I headed for a mountain road and found a good one.

Tivoli Road was freshly paved, no guardrails, signs or electric power lines. Just a smooth road through the forest.

We got to the top and returned back down. Nothing but beautiful.

We had dinner at the Covered Bridge Restaurant down the road, then headed back in the drizzle. 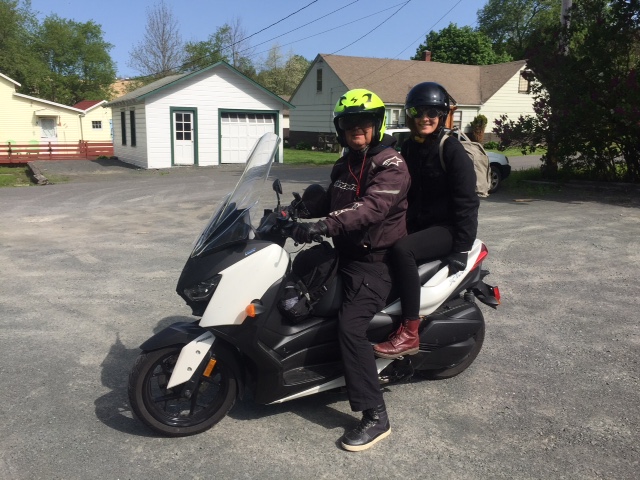 Me and Kylie leaving Hunter, NY 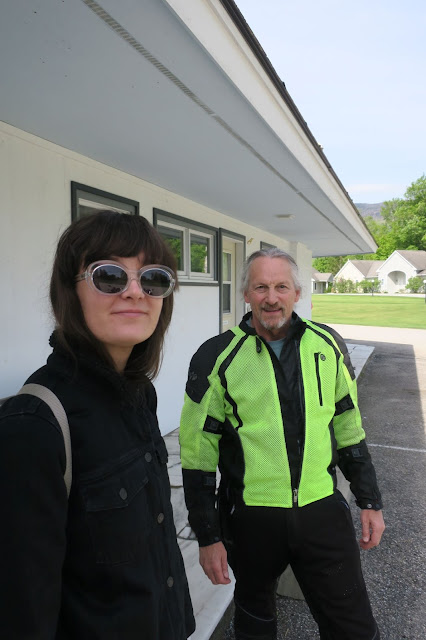 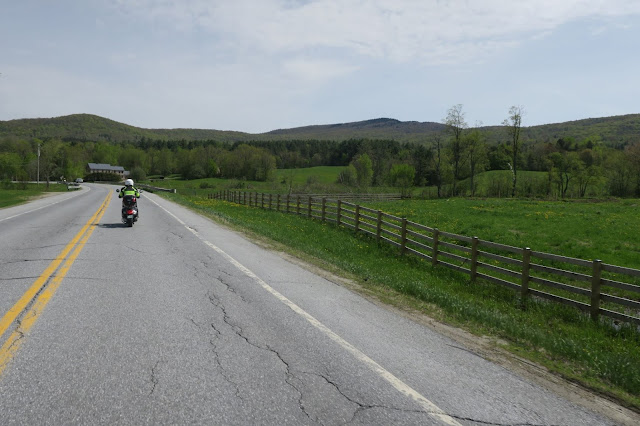 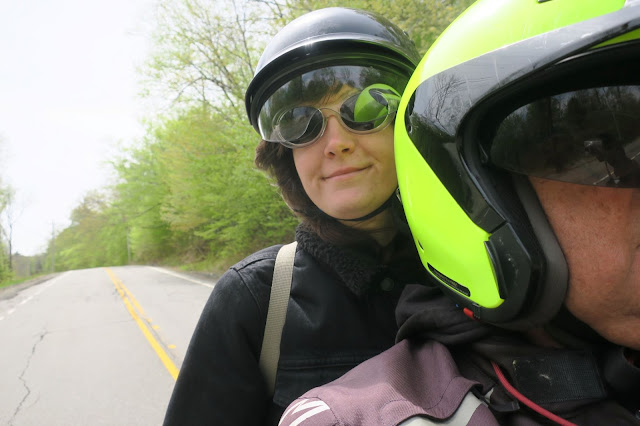 Selfie of Kylie with no chins this time. 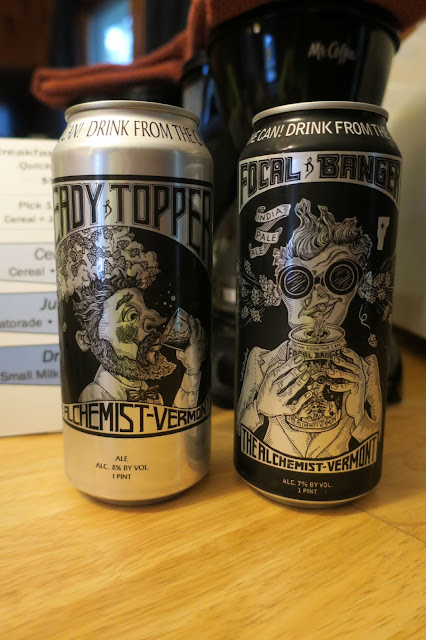 Vermont's finest, a gift from Barry. Thank you!
Posted by Bill Leuthold at 4:25 PM No comments: