Today, I stopped by Boris' warehouse to see if he and his brother Eric were making any progress on repairing Vanessa, the 2007 Vespa GT that I am buying from Leslie after my wife Sarah ran it into a Land Rover while turning at the end of our driveway.  It was heavily damaged on the front end, and to make her perfect to give back to Leslie, it would be a major undertaking. 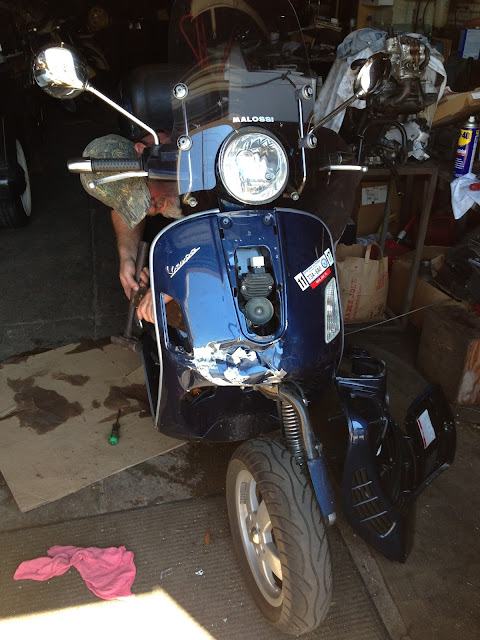 She was seriously damaged.


Leslie kindly offered to sell her to me a couple of weeks ago.  The price was Blue Book retail value.  I was pleased to take her for that after letting her get damaged by making a poor decision.  I wasn't sure if she was sound enough to try to repair her, but let Boris and Eric give it a try.

When I arrived, Eric had Vanessa by the front door.  This usually means it is the scooter to work on that day.  It was and he quickly began disassembling the glove box enclosure.  It came off, then the radiator that began leaking immediately after the crash.  It turns out that the leak was from a damaged hose, not the radiator.  It was fine.

After clearing the way, using his fine tools, mostly a cut down 2x4, he began banging out the dents.  It started looking normal after some work.  He straightened everything to the point that the right turn signal fit and the horn cover too.  It was lumpy, but definitely rideable.  After hitting it with a grinder to get the paint and old Bondo, from an earlier accident, off the steel leg shield, he asked about paint.  I told him that primer would be fine for now.  I want it to look ok, but am more interested in riding. 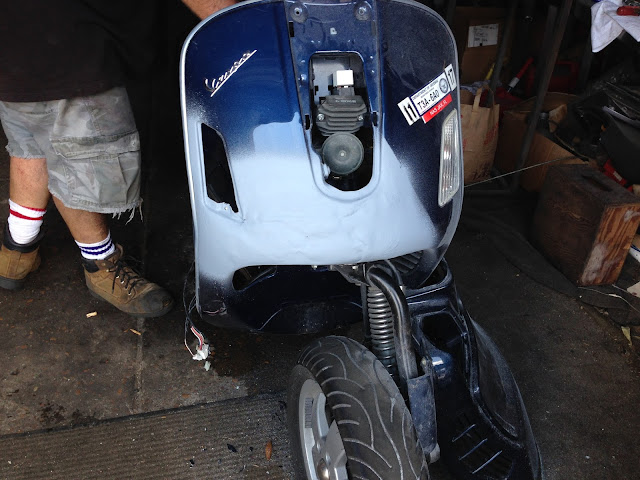 Primer in place.  The turn signal and horn cover fit well too.


He did the primer, then reassembly.  With the only missing piece being the front fender, I started it and took a 15 mile ride through town and over the Hart Bridge, returning on Atlantic Boulevard.  She ran like a new scooter.  No pulling or poor feel.  It was great.

In addition to that, while Eric was fixing Vanessa, I had Boris look at Rocket.  He immediately found a broken vacuum hose coming from the evaporator canister.  These breaks cause running issues and was probably the cause of the three flooding and stopping issues with Rocket recently.  After this repair, I took it for a fifty mile loop to Baldwin, then south to Normandy Boulevard and back home.  Perfection is the only word to describe it.  I am taking Rocket on the 7BSC ride to Palatka tomorrow  and am confident that it makes it,
Posted by Bill Leuthold at 5:37 PM