Late in the afternoon last Friday, I was planning to ride my Honda to Orlando to meet up with Sarah and Kylie, who had driven down earlier, and Sam, who was flying in from Chicago.  The reason was to bury Sarah's Mother, Sue.

A half hour before leaving, Kylie called from the road to tell me that I needed to bring three shoe boxes full of photographs, and that I probably needed to drive the Miata.  I thought not, as I really wanted to ride and the Honda hadn't been anywhere in a while.

So I got out a soft suitcase and put the photos into that, zipped it up and tried strapping it onto the bike.  The Honda, a NC 700X has a storage box where the gas tank usually resides and my plan was to use that for the clothes that I needed.  While trying that in the garage, I knocked my yellow helmet to the floor.  I hate doing this because it usually breaks something.  It has a bunch of little vent covers and visors that can break easily when they hit concrete (odd for a safety device, I know)

When it hit the floor I was angry with the situation and myself, so I bent down to pick it up.  Because I was a bit mad, I began to stand bolt upright when the back of my head hit the bottom edge of a shelf that runs along the back wall of the garage.  It hurt.  A lot.  I put the palm of my hand on the spot, then checked it out and it was covered in blood.  Then, from my hair, the blood started raining down.  I have never bled so freely.

I went outside and it was dripping all over the driveway and brick sidewalks that have come with the new duplex.  It started to slow so I began looking for a hose that I had disconnected to mow the week before.  I hooked it up and started to try to clean the spot and get the blood out of my hair.  The first water was brown from the mix of blood and water.  It stung a lot when the water hit the cut.

At that time, I still wanted to ride but was dazed a bit.  I noticed that the fuel tank was not full, so I took the spare tank used for filling the lawnmower and filled the Honda tank to full.

But after a few more minutes I realized that I would soil the inside of the helmet with the remaining blood and knew that Kylie was right and driving would be the better way there.

So I put the bike away and drove.

It rained most of the way home on Sunday so, good decision reinforced. 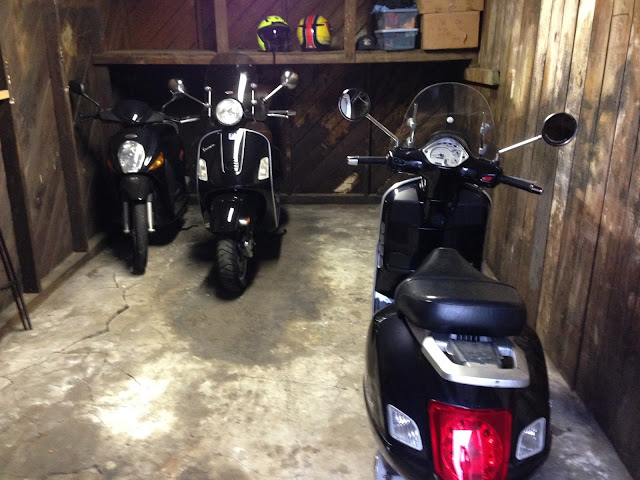 The shelf in the background. 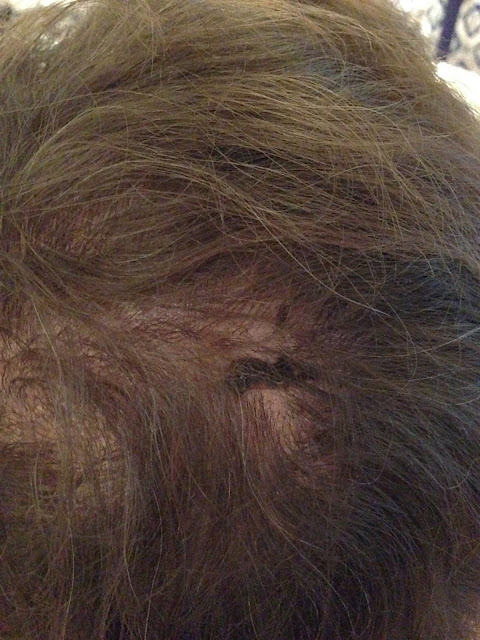 Posted by Bill Leuthold at 4:54 PM