I now own Vanessa.  Not legally as I have not received the title yet, but I deposited a big check in Leslie's checking account this morning that starts the wheels turning.

As I have posted here, I had been holding Vanessa, Leslie and Maria's Vespa GT, in my garage while they lived in Italy for three years.  I had been very careful with her until I asked Sarah to ride her to the office one afternoon so we could clear some space for a garage sale.  Sarah had ridden my Malaguti several times and I assumed that she would be OK.  I refreshed her memory as to what each lever does, etc. and sent her on her way.  She promptly ran into a parked Land Rover on the street in front of our house.  It was all my mistake and I take the blame for the accident.  Sarah was unhurt, but Vanessa was a mess.  She had a large dent in the front leg shield and was leaking coolant profusely.  Insurance would have instantly totaled her.

At first I was to repair the scooter but that felt daunting.  Getting her back to new condition would require proper tools and a skilled body shop.  I asked Boris if he could get his body guy to do the work but he couldn't get him interested.  I went to the local dealer to see who they used and they said that they couldn't find a shop to do body work on Vespas.  I tried a local body shop but couldn't get them interested either.  I was out of ideas when Leslie let me know that she would sell her to me instead, as she and Maria were to stay an extra year in Italy.

I agreed to her terms and took her to Boris to have his brother Eric bang out the dent and get her on the road again.  He succeeded and I am now the owner of a perfectly good 2007 Vespa GT.  It is the fourth I have owned.  I sold one so I still have three.  It may be an obsession, but it is fun having so many. 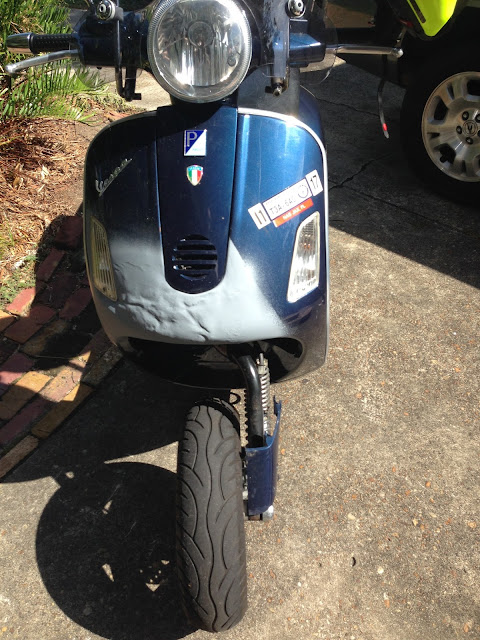 After the repair.  Still awaiting the new fender that I will have painted blue to match.  I am leaving the bent parts and painting them with primer only for now.  I prefer that to bondo. 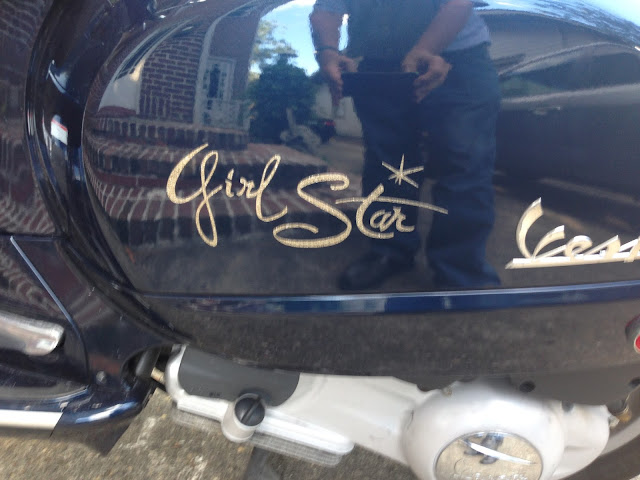 I am leaving the Girl Star sticker.  It just belongs there. 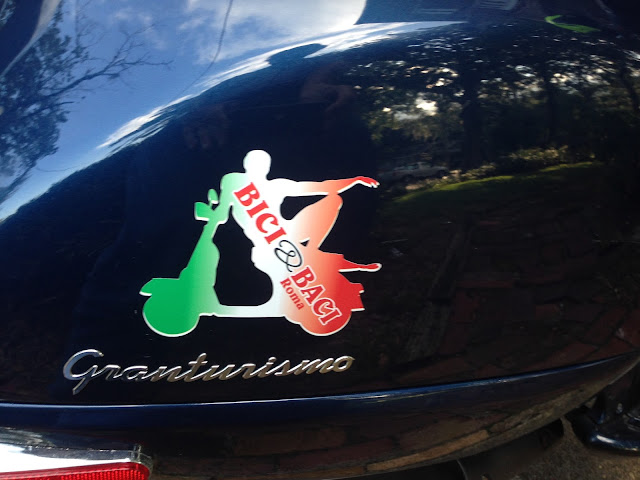 This one came from the scooter rental shop in Rome.  It stays too.

I rode her to Baldwin yesterday.  20 miles at 70+ mph and she was more solid than the others,  It is probably because I took the top case off while leaving the heavier bar ends on the handlebars.  We were also running with no front fender and that may have helped too.

If all goes well, she will be used in an upcoming Iron Butt Saddle Sore 1000 ride in October and the 2016 Scooter Cannonball Run.
Posted by Bill Leuthold at 11:39 AM