On Thursday I left Jacksonville just after 8:00 to meet up with Ken in Perry, around 140 miles to the west.  I rode on I-10 to get out of town, 30 miles to Macclenny where I turned south on 121.  Because I prefer empty roads, I turned off 121 to 130 at the closed Cash Cow store just south of the Florida Mental Hospital.  Then to 229 and 238 to Lake Butler.  238 is one of my favorite roads in the area as it is narrow, vacant and goes through forest, past a large lake and farm.  That plus it has a few turns that make it interesting.  Here it is as I turned on it from 229. 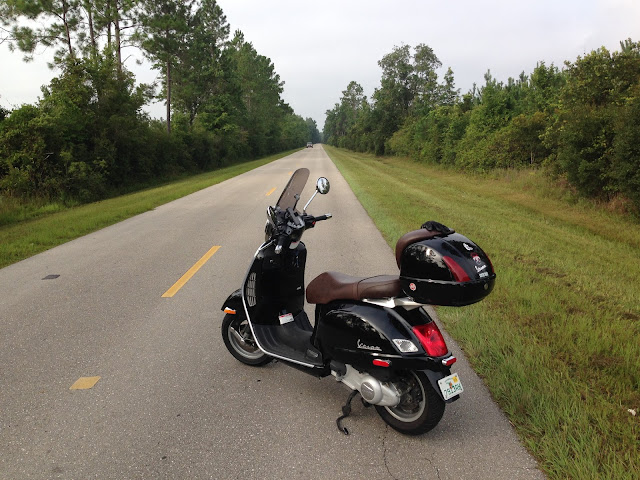 Rode along the lake through through Lake Butler, then picked up 121 again to Worthington Springs.  There I headed west on 18, another of my favorite local roads.  This ran into Fort White where I took 27 through Branford and Mayo to meet Ken at the McDonalds on 98.  When I got there, I checked my phone to find a voice message from him saying that Big Red, his 250 GTS had stopped running 27 miles south on 98.  I called him to find that he had called a tow truck to haul Big Red to a dealer in Gainesville.  He suggested I continue to Apalachicola and meet up with Captain Gary there and await his arrival via rental car. 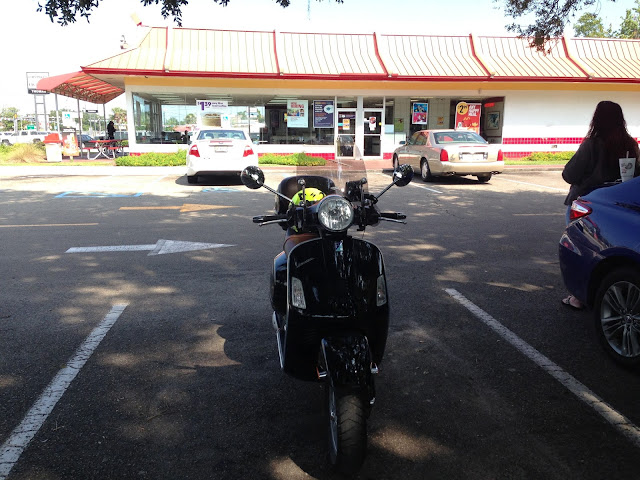 I decided to ride in a leisurely fashion, stopping a few times for photo opportunities, inspired by Steve Williams and his Scooter in the Sticks Blog.  The first stop came when I was just west of Perry and saw a turtle a quarter of the way across 98.  I slowed and turned around and parked on the opposite shoulder.  One pickup truck passed in the turtle's lane, then a large truck was coming in my lane and I hoped that he didn't give so much room around my scooter that he would take out the turtle.  Luckily the little friend was not hit and I moved it to safety. 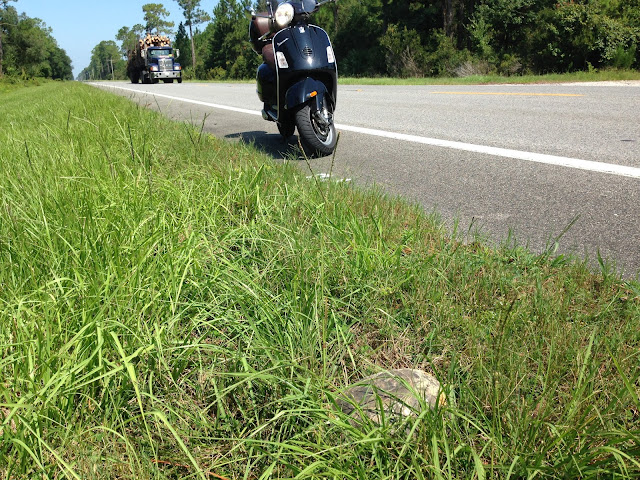 I stopped to take a photo of Razzo in front of the Panacea town sigh.  Then turned and found it in front of a cool marshy pond.  In Carrabelle, I stopped for fuel and rode a scenic ride along the coast where I took another photo.  Then stopped for a shot at the Crooked River Lighthouse. 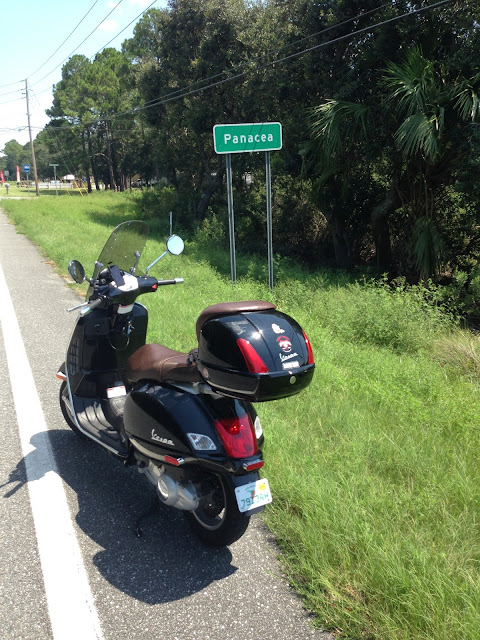 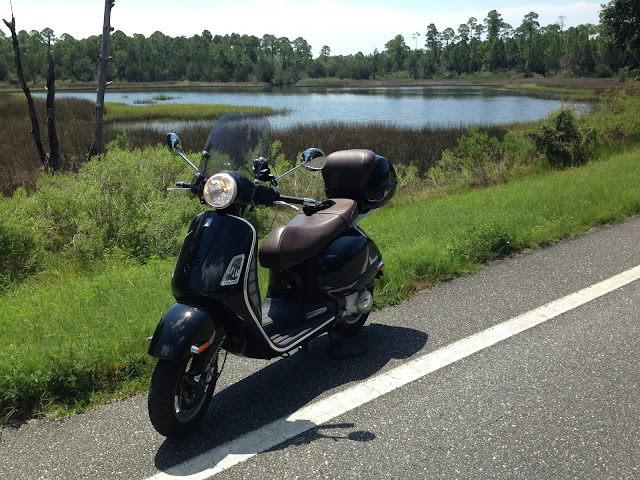 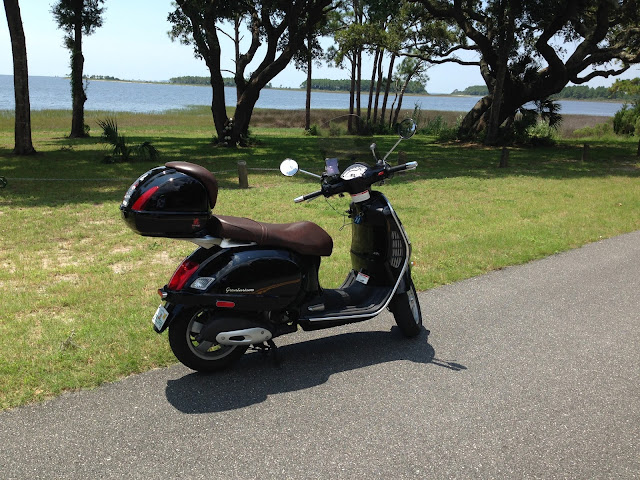 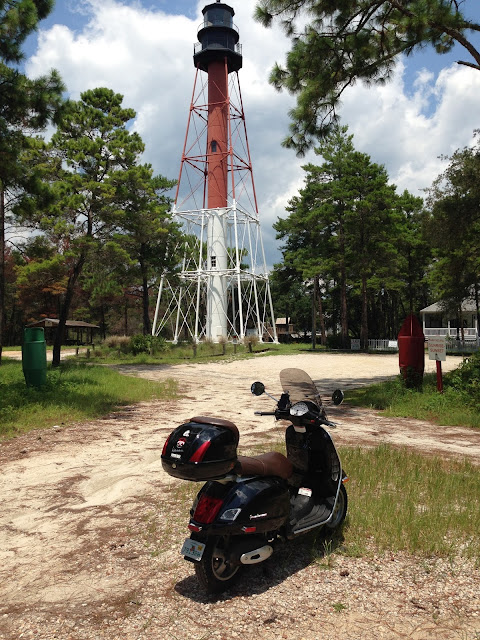 From there to East Point, 98 runs along Apalachicola Bay on smooth pavement with some nice curves and views.  I couldn't pass Lynn's Quality Oysters at lunch time without stopping for a dozen raw and a Yuengling. 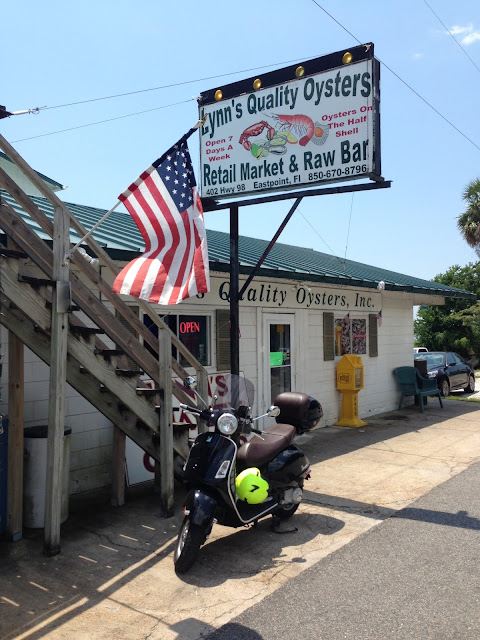 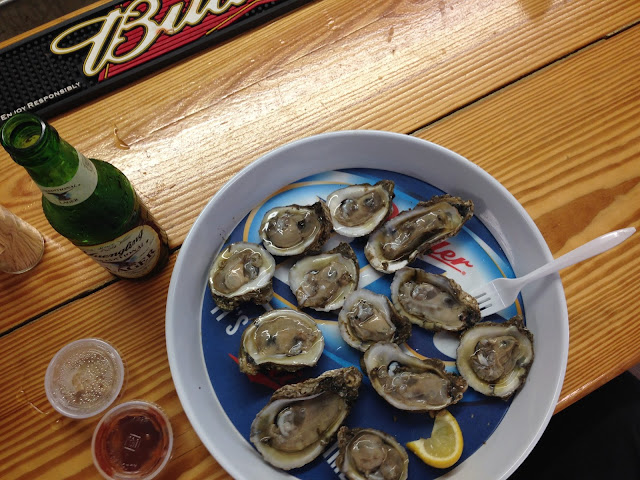 After that delicious delight, I crossed the long bridge into Apalachicola and checked into the Gibson, a fine old Victorian establishment in the heart of town.  While checking out the room, I heard a noisy Vespa sound coming from out front and speculated that Captain Gary had arrived.  I went out to meet him and let him know that his exhaust gasket had failed. He hadn't noticed. 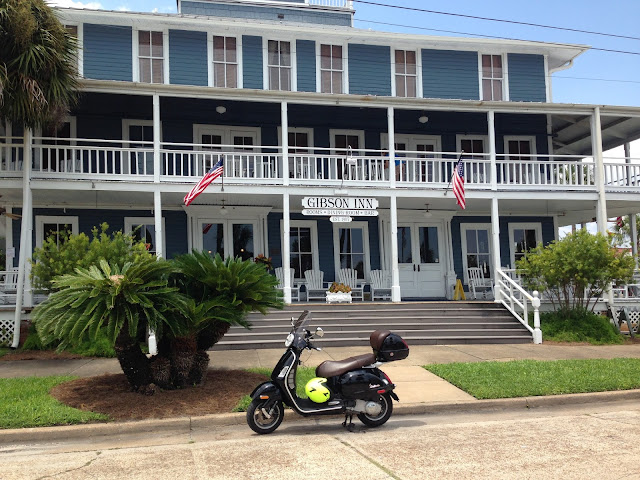 He wanted to share a room, so I changed my room from a king bed room to a pair of twins.  It allowed significant savings for both of us that we spent on more good food and drinks.

Because Gary has spent a lot of time in Apalachicola over the years, he took me on a guided scooter tour of the area.  It is a wonderful town that began and grew at a time of fine architecture and planning, the late 1800's and early 1900's.  Then it stopped growing and the structures survived.  Gary says that the houses are all being bought by people who are restoring them.  It makes for a fine, small town to visit and enjoy. 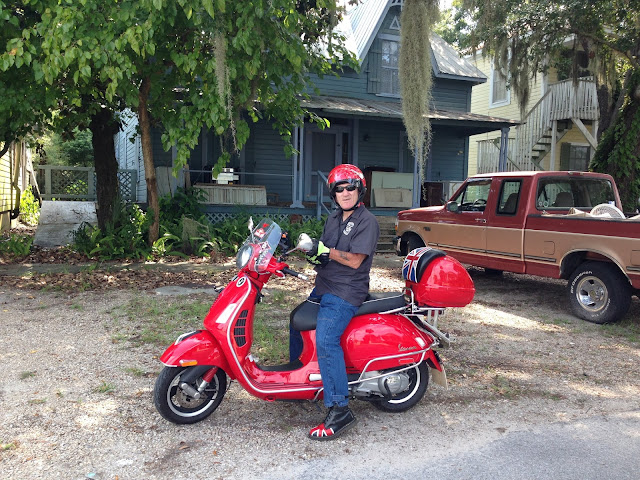 We were having a nice discussion with Trish, manager at the local watering hole that Gary had suggested when we got a text from Ken saying he would be at Lynn's at 7:00. 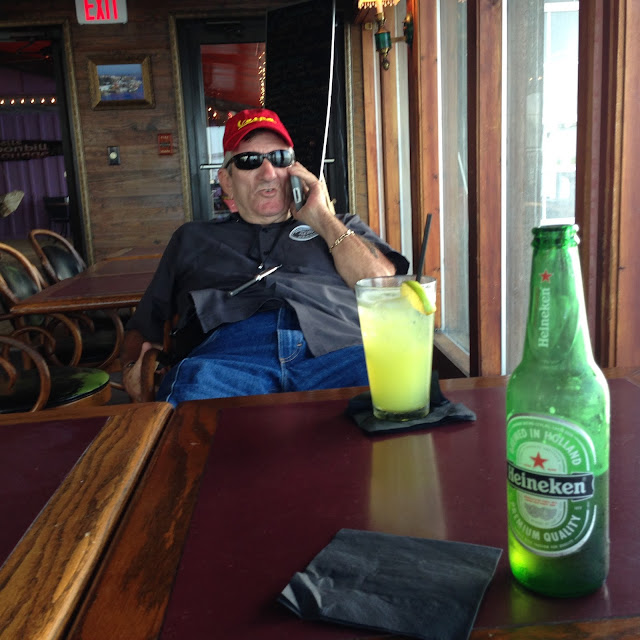 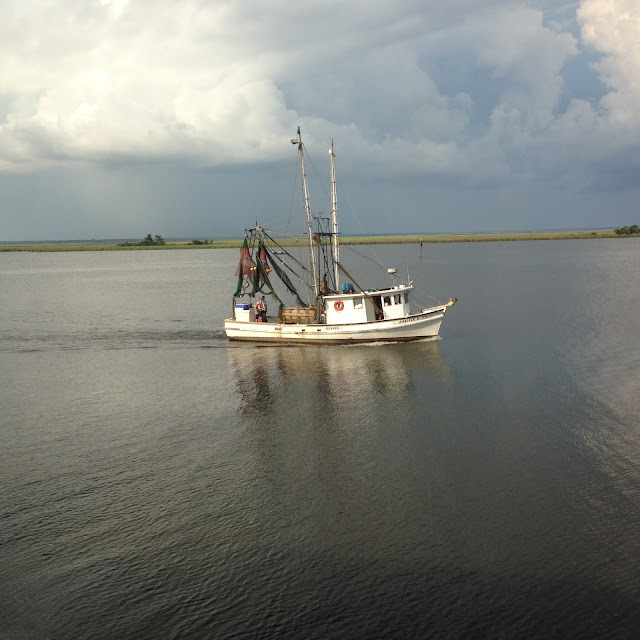 I said we would meet him there.  So Gary and I rode over the long bridge for more oysters and Yuengling. 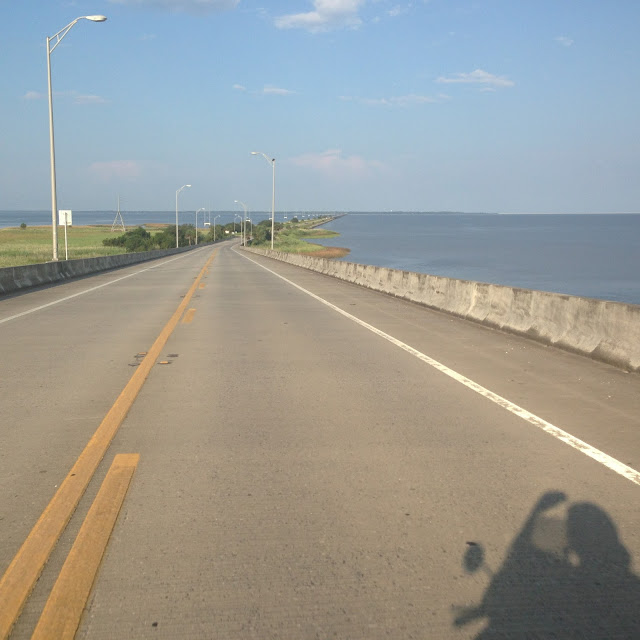 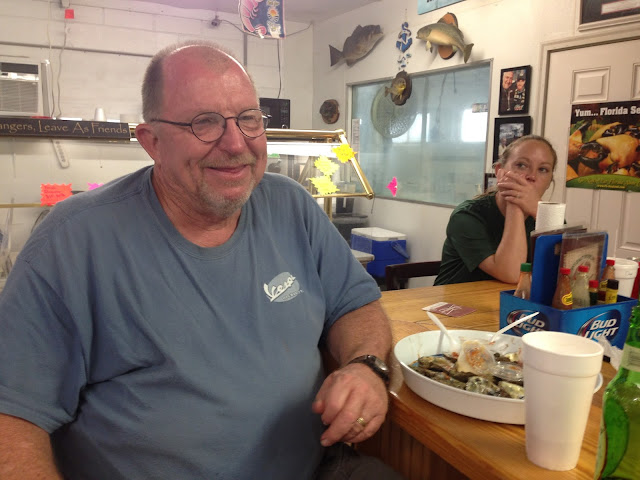 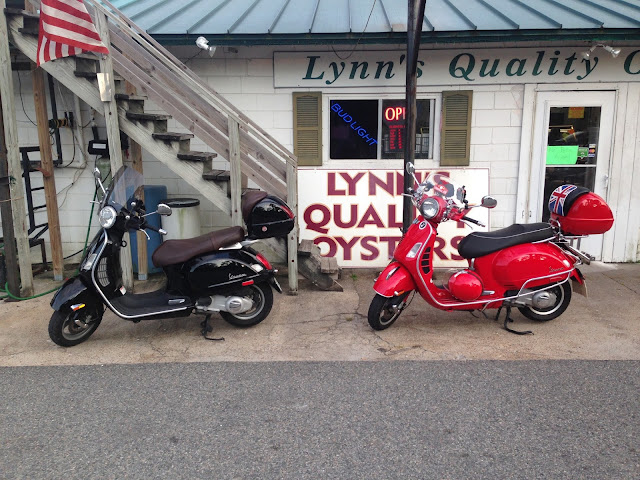 Razzo and Gary's scooter at Lynn's 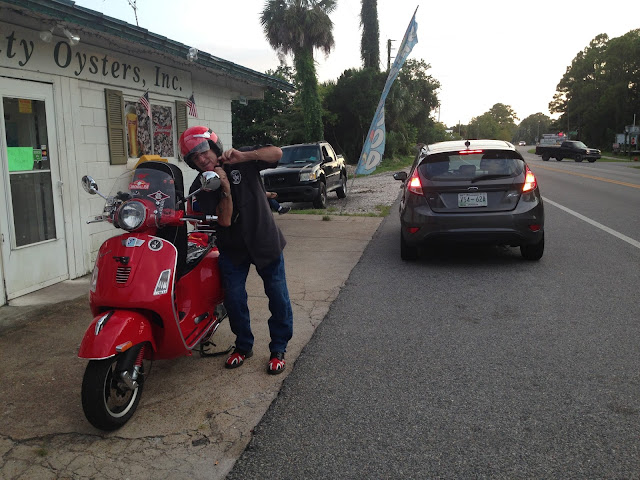 
After that we headed back west to Apalachicola so Ken could check into the hotel and we enjoyed ending the long day in the old bar inside the Gibson.

Morning came and Gary wanted to change the exhaust gasket on his scooter as leaving it leaking can damage the bodywork and brake line.  He carried an extra, I had two and the tools, but Ken had tools too (we are all experienced at Vespa touring), so Ken and I proceeded to watch Gary remove the exhaust while we drank coffee on the wrap around porch.  He brought it up to us where he and Ken did the gasket replacement.  Gary installed it and it was as good as new. 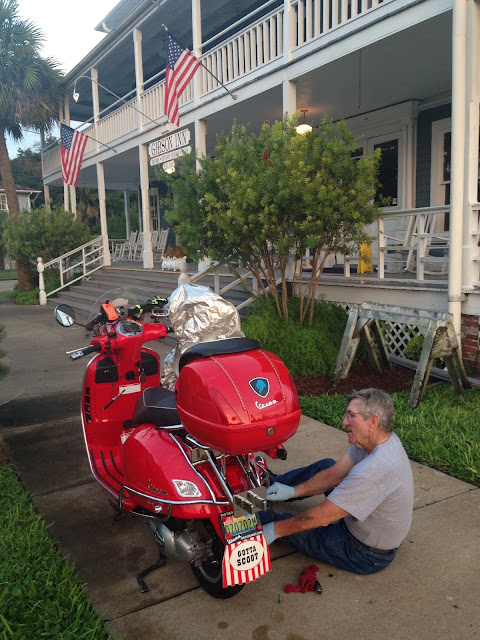 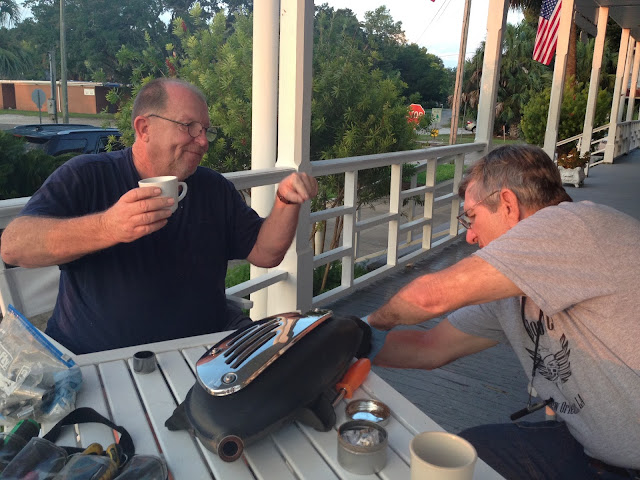 Ken telling Gary how to insert the gasket 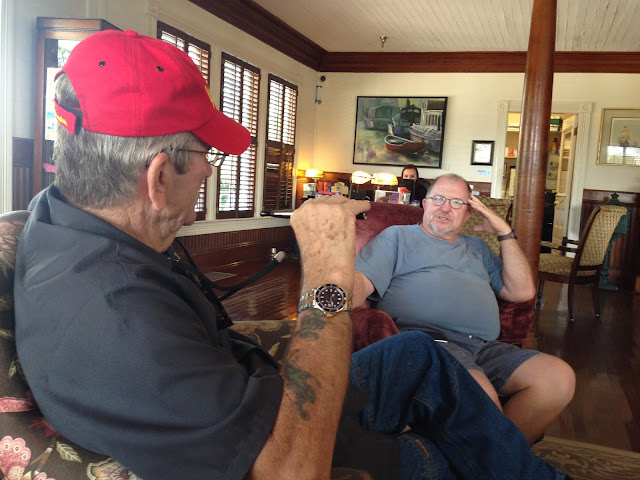 Ken wanted to have breakfast at the place where the locals eat theirs, the Mexican restaurant in East Point.  Gary would have none of that so we went to Caroline's on the river where we had a delicious breakfast overlooking the water.

Gary was getting anxious to head home, it turns out that he was not feeling great, so he headed back to Dothan at 11:00.  Since Ken was driving a car, he said he wanted to explore some side roads on the way back and I said I would follow.  But we turned off at Lynn's for more oysters and Yuenglings, then I abandoned him and headed home along the same route.

Razzo and I had a light headwind the entire way home that made it a little tiresome, but we made it easily.  It was a very nice way to spend two days. 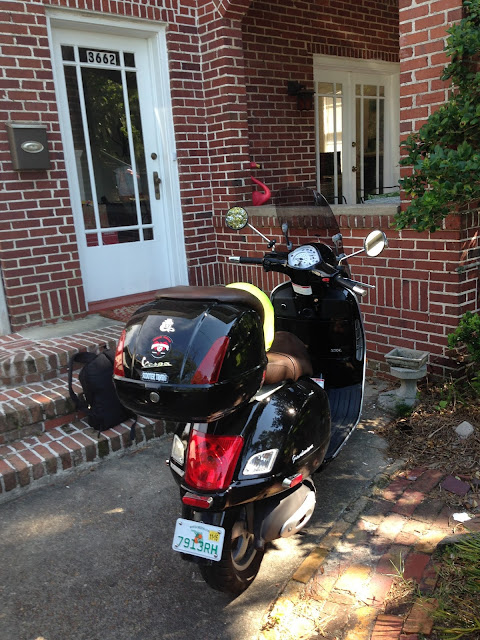