It was raining when I woke up at 4:00 this morning.  I looked up the weather report, found that it would begin clearing at around 8:00, then went back to bed.

A crowd had gathered in the breakfast room at the Lebanon EconoLodge.  Everyone was discussing the weather.  And that weather was gradually clearing, with a window of opportunity to ride out after 8:00. Good weather was in the forecast, but trouble lay ahead.

I began at around 8:30, heading west on I-40 in a light rain.  I mostly followed the official route to the first checkpoint and it was a beautiful ride on fresh black asphalt that looked like a black ribbon following the contours of the countryside.  Farms lined the road as far as could be seen in some areas. I caught up with Ken a mile or so before the checkpoint.  He was going slowly through a part of the street being used to drain an adjacent field.  The overnight rain had been heavy. 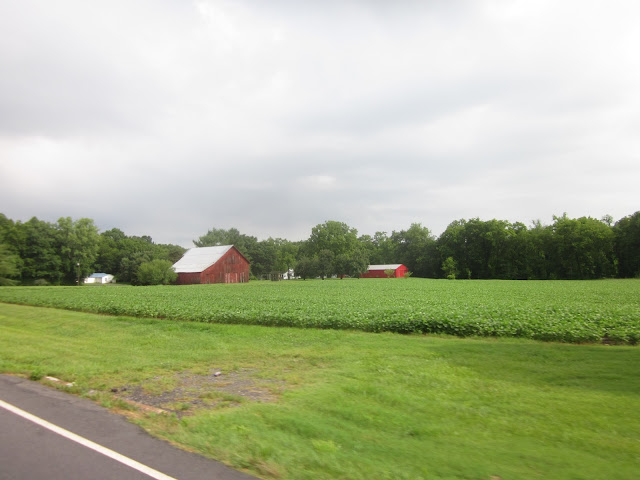 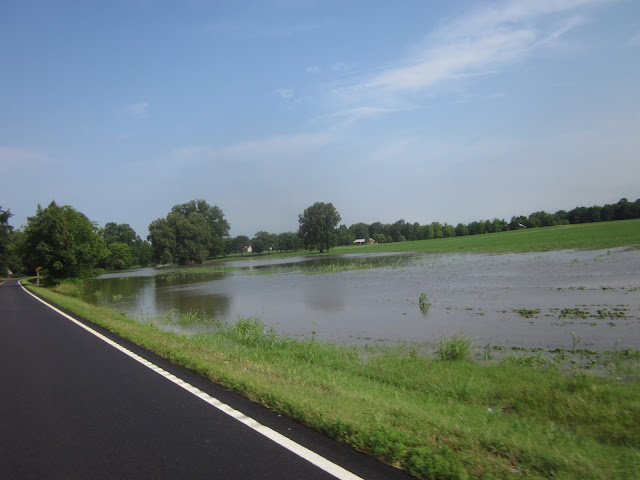 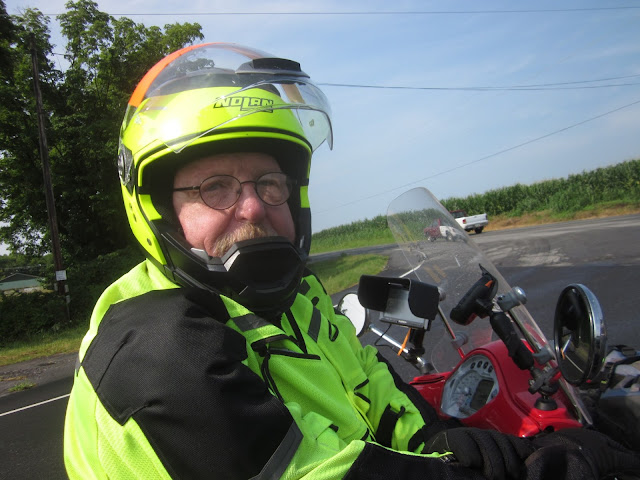 From there, My two Garmins decided to take me to I-24 for a 20 mile blast down the highway.  Vanessa ran a steady 75 to 80 the entire way.  A big tail wind helped.

Checkpoint 2 was in a park known as the Between the Lakes Recreation Area.  It had a beautiful road running the length of the park.  The Checkpoint was at the Tennessee Kentucky border where I stopped to fill the fuel tank with my carried Jerry can.  It proved to be the only fuel stop needed on this short leg.  While there I shed the rain jacket and sped away. 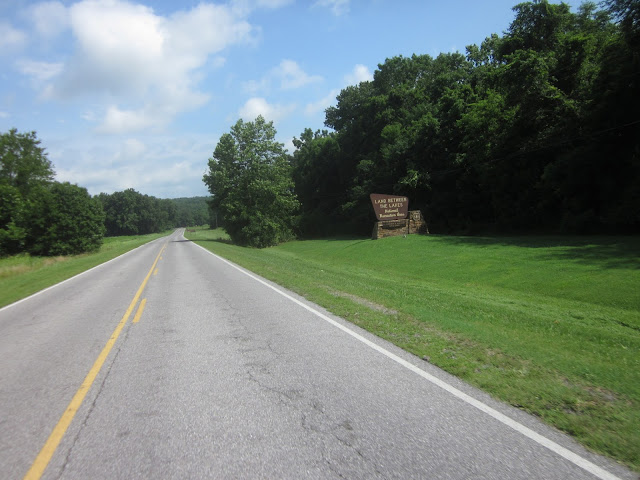 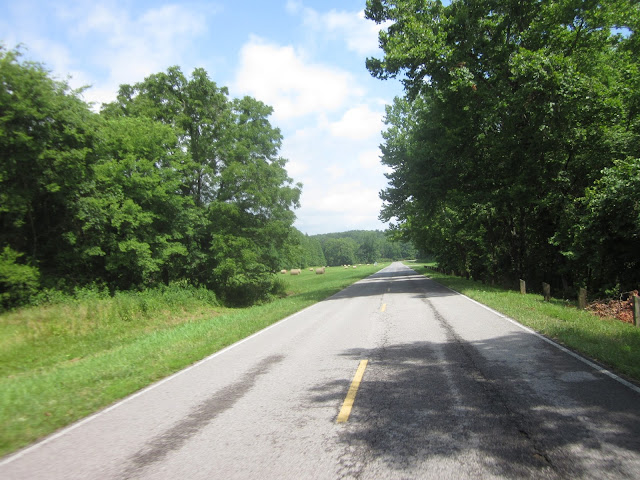 The road through Between The Lakes

Checkpoint 3 was an intersection in the town of LaCenter Kentucky.  On the intersection is a restaurant called Bluegrass, where Ken decided to stop for lunch.  He stopped, very unusual for a Cannonball rider, because he could see the approaching storm. 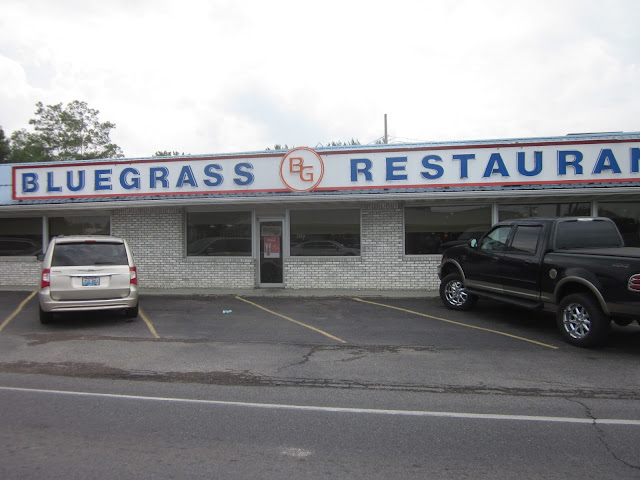 I saw an angry, jet black sky along my path as I rode towards the Mississippi River.  I stopped in an unused bay of a self serve car wash to put the raincoat back on and to place my wallet and phone in the safety of the underseat storage.  Then headed to the storm.  The approach was along the river.  A tree was down on the road, blocking one lane of traffic.  Parts of trees were everywhere. There must have been a tornado in the area. 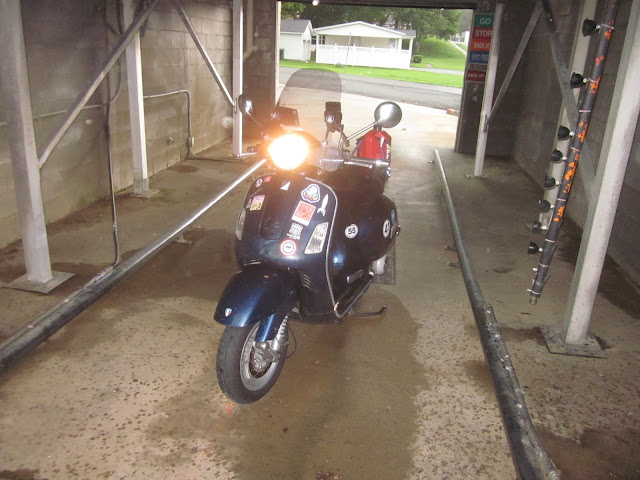 Vanessa in the car wash 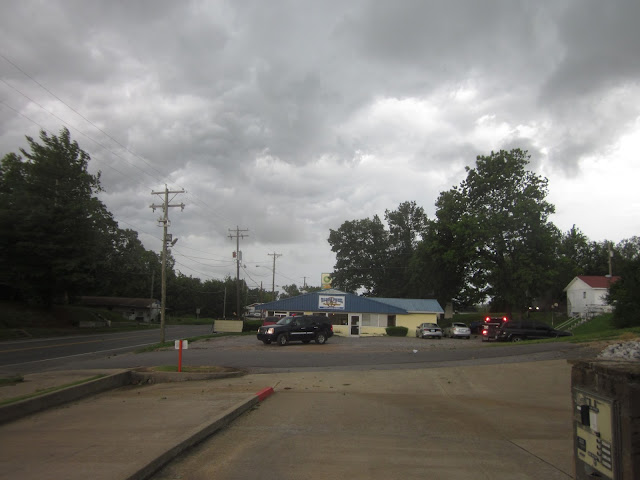 The clouds looked much worse in person

The bridge was an old one, only wide enough for two cars and a steel trellis structure at the span.  The wind was gusting.  My guess is that some had to be as much as 60 mph.  I heard later that a truck had been overturned by a gust.  I started gingerly across.  As I rode ever more slowly, the wind was moving me around.  A lot.  I had trouble staying in my lane and trucks were approaching.  I made it past them but made a bold decision to turn around and head back to the safety of the land.  I sat there for only, maybe five minutes, noticed the wind slacking, and proceeded again.  This time the traffic was lighter.  As was the wind.  Actually no problem at all.

From there I had to use the Garmin Zumo for the remainder of the ride. I was lucky to have it as it took me to the hotel. 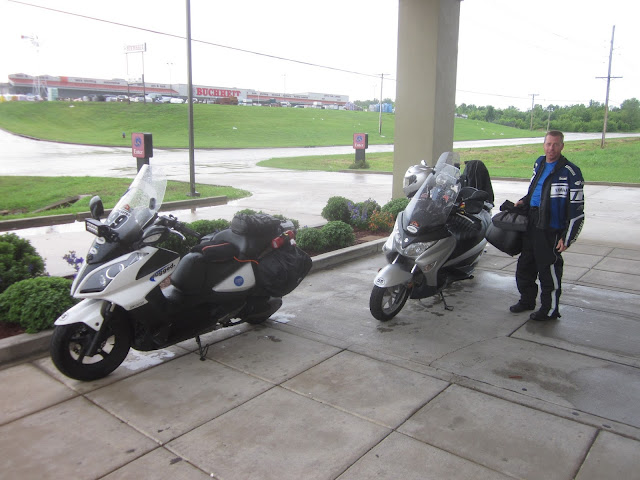 Z50 (Kevin) and JDracer (Juan), both from Gainesville, had just arrived at the hotel.
They were at the bridge when I was there.  They stayed under an overpass for a while.