I decided to miss the heat and storms today.  I left at 5:45 AM as the sun was rising.  It was the opposite of yesterday's weather for me, cool and calm.  I wore the mesh jacket that I bought for hot weather and was cold as I rode off towards Clemson and the day ahead.

The ride from Clemson to the NC border was all beautiful with hills and curves to make any riding enthusiast happy.   From there the chosen route went through Cashiers where the two GPS's conflicted on their paths.  One said to take the long, fast roads and the other to take twisty slow roads.  I chose the twisty roads.

Checkpoint two was at the Stecoah Diner where our friend Doug, Old As Dirt, was there to greet us and and hand out stickers and water.  I stopped for a minute (I am running for time you know) and enjoyed seeing him again.

We had the option of running the Tail of the Dragon or Cherohala Skyway after that checkpoint and I had decided ahead to take the Cherohala, thinking that the traffic would be lighter and the road faster.  Little did I know the truth.

From there we had a nice ride into Pikeville for checkpoint 3, in the middle of town.  The ride in was downhill on some of the best curves I have ever ridden.  Luckily I had no traffic and took advantage of them, riding from apex to apex as fast as I could.

Outside of Pikeville we were supposed to take 30 west towards Lebanon.  I had chosen this route as it was shorter and more scenic, thinking I could make up time by speeding.  30 was closed for repairs necessitating a detour, not marked on the highway at all.  Luckily for me, I had one GPS set up to take the alternative route anyway so it was just a matter of looping back.  Many took longer.

My problem with the day is that, if I want to be competitive, I have to take the route that gets me to the destination in the shortest possible time.  I thought I was doing that but it turned out that every option I took was slower than at least one other option.  The alternative I chose between CP1 and CP2 was very twisty and slow.  But fun and pretty.  Taking the Cherohala Skyway proved to be the biggest mistake for fast times.  I ran into a one lane situation where the lady with the sign held me for more than fifteen minutes.  Then the fog came.  Thick white fog that shortened visibility to less than 100 feet in many areas.  Low visibility means slow running.  Then the last leg had many riders going straight north to I-40 for what Google said was the fastest route. I took slower but more scenic roads that were much shorter in length.  But these took longer too.

The tail of two routes is that there was a fun, scenic route that could have been fast but conditions made it slow.  Then there was the faster route that many took.  Or they took a combination that proved to be better than my choice.

I rode hard but not as fast as yesterday.  Too much pressure, so I decided to slow it down a little.  Still quite quick, but a little easier. 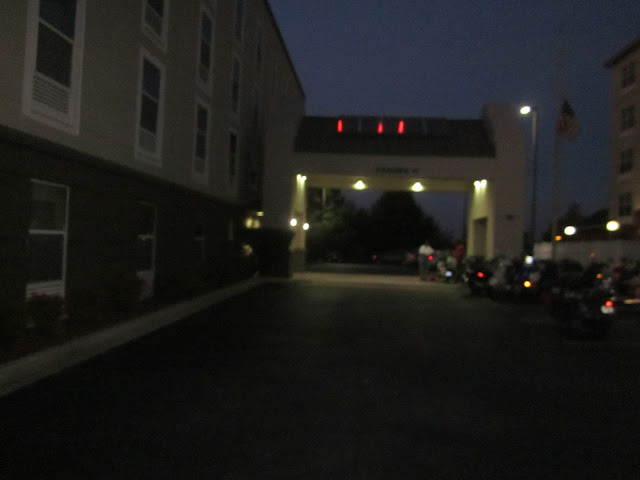 Dark when I began at the hotel 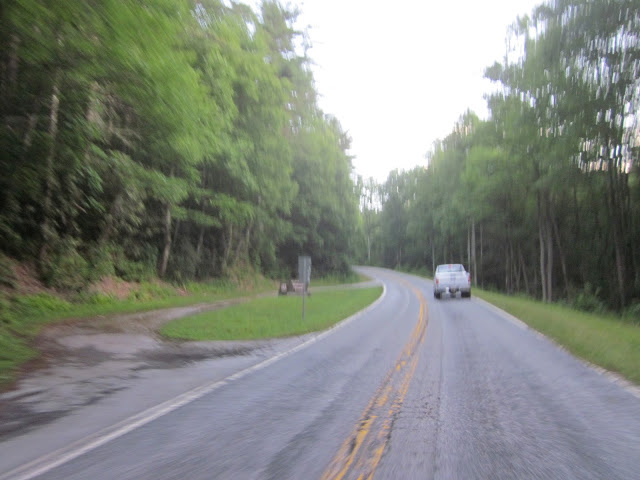 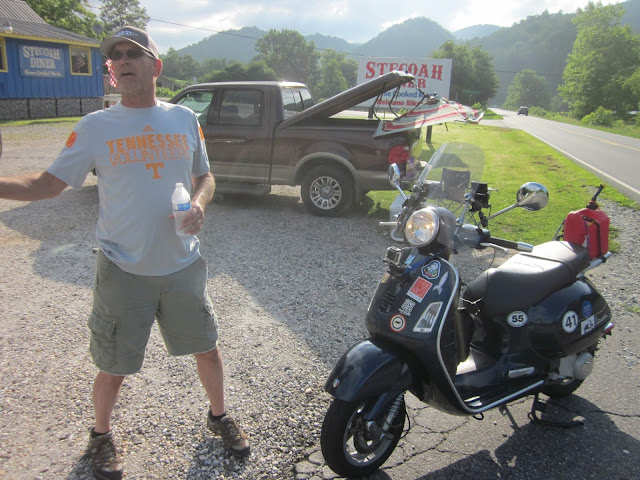 Doug and Vanessa at Checkpoint 2 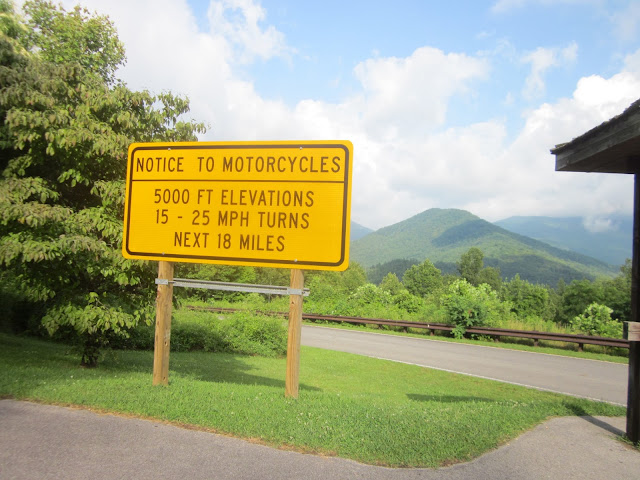 Cherohala Skyway start.
Little did I know it would be a mess. 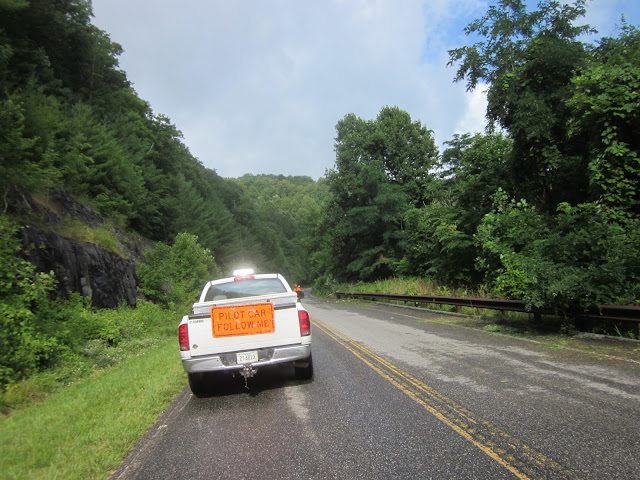 Follow the leader who stopped to talk to every worker...after the sign person held me for 15 minutes. 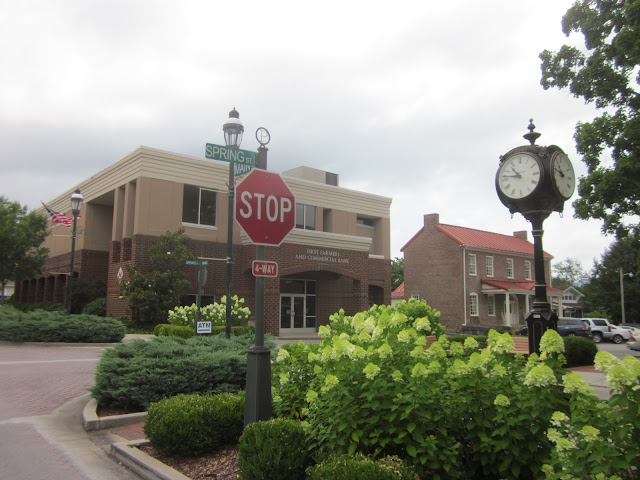 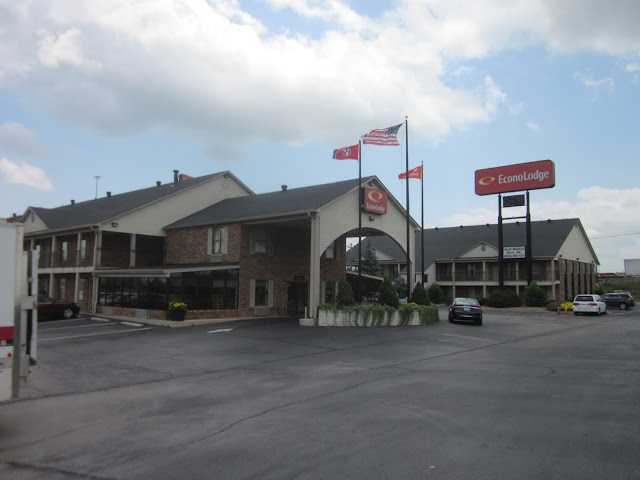 Made it to the hotel.  First rider in. 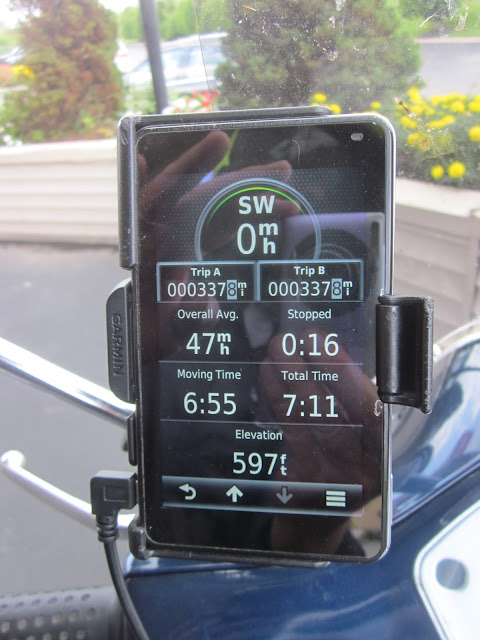 Tale of the tape.  Too slow.

Posted by Bill Leuthold at 7:01 PM