It wasn't on Rocket but the white GT I had bought from David the year earlier.  I named that one Lightning, Sue added it as White Lightning due to it's color.  It was a fine scooter that had its mishaps.  The first was me dropping it in Alabama on our Natchez Trace ride, the second after selling it to my friend Zoltan, it ate it's own engine by dropping a valve into the combustion chamber doing massive destruction.

But on this ride I had no real issues.  It was a beautiful day that began for me at 3:30.  I rose at that time to take a shower and hop on by 4:00.  I got off close to that, sent off by Sarah and Kylie.  It was nice that they got up for that.  The first stop was the AP station a half mile from home to fill it up and get a receipt required to designate the official start place and time.  From there it was a quick half mile to US-17 to I-10 to I-95 for the first leg north.

I had planned all of my stops on Google Maps, but found that I had plenty of fuel and energy so I just raced past the first one.  I ended up stopping just north of Savannah near Pooler.  Filled it with fuel and me with an Egg McMuffin at the adjacent McDonalds.  I remember ordering coffee, the attendant looked strange and served me something like coffee that I poured out and replaced with Coke.  Not what I wanted but OK.

On this first leg I averaged around 70 mph.  I had prepared Lightning by changing the variator, belt, rollers, rear tire, oil, bearings, etc. so it would be as fast and reliable as possible.  It had 23,191 miles on it at the start.

From there I continued north to I-26 and headed towards Columbia, S.C.  I stopped before getting to Columbia for the second fuel stop along the highway near St. Matthews.  I-26 meets I-77 just before Columbia and runs east of the city, then towards North Carolina.  I arrived just south of Charlotte at a BP station near Fort Mill where I met up with Adrian Steifel, a friend I had traded messages with on Modern Vespa.  It was 9:58 when I filled up at the station there.  He rode with me to Salisbury, NC. where we had lunch at a Chick-fil-A.  It was a long lunch, an hour and fifteen minutes, but it provided a nice rest.

From there I headed northeast along I-85 towards Greensboro where I then took I-40 past Durham and Raleigh, heading to I-95.  I had to stop once more quickly than usual as the two glasses of iced tea ran through me quickly.  It was at McLeansville, NC at 1:00 in the afternoon.  I was at 23,672 miles, 481 miles into the ride.

Then Santee, SC at 5:38.  On this leg I was running an easy 76 to 80 mph running with traffic, hitting my fastest on the trip of 83 on a long downhill stretch.

Midway, Ga at 8:07 as it was getting dark.  On this leg it all changed.  Lightning didn't want to go faster than 70 or 71, so I had to ride in the slow lane with the trucks.  These scooters are more like organic beings than any machine I know.

I arrived in Jacksonville and went to the Shell station on Roosevelt Boulevard, further than home because the odometer was not to 1,000 miles yet, even though the GPS had me well over the mark.  I filled the tank there at 9:55, so a little under 18 hours.  I got home to the relief of Sarah and Kylie and took a while to get adjusted to not moving.

The only strange effect of the ride was my hands.  My left hand lost a lot of strength and mobility, right hand not so much.  It lasted a couple of days but came back to normal.

Would I do it again?  Yes, I actually enjoyed the ride.  I have two friends who want to do it and I have offered to ride with them.  I hope that they can keep up. 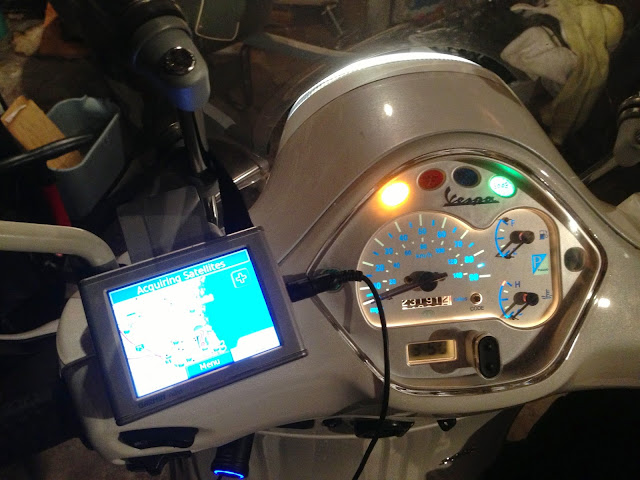 Lightning at the start 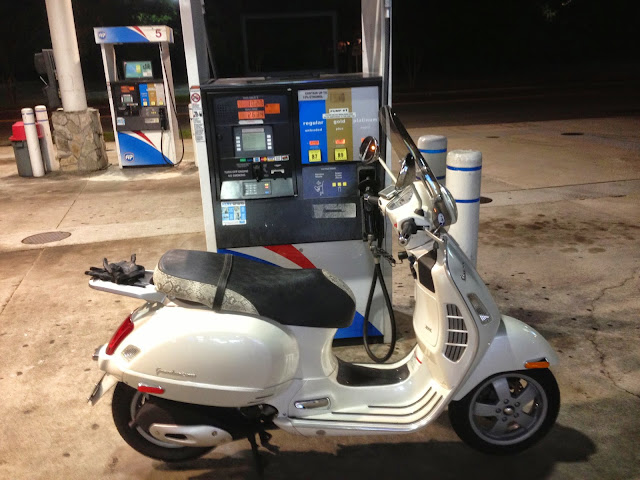 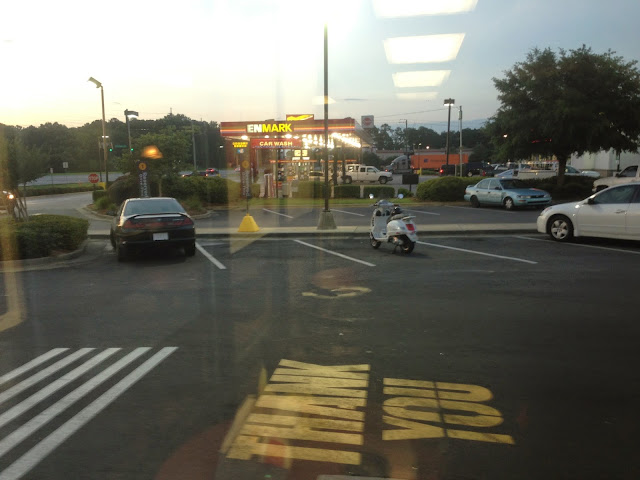 Sun coming up just north of Savannah, Georgia at 6:00 AM 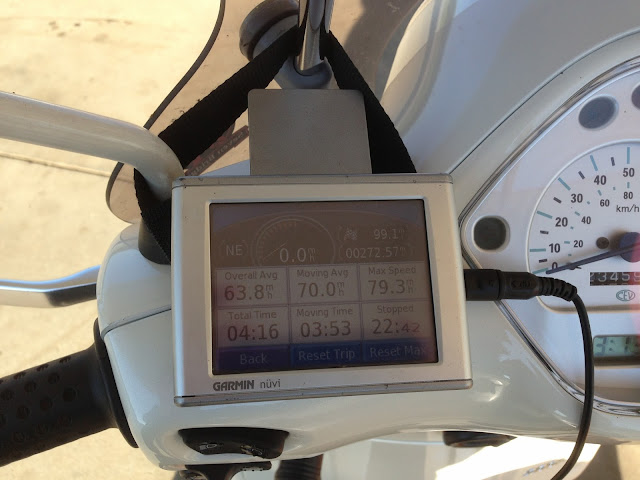 GPS in Pooler, Georgia.  I was pleased to average 70.0 mph 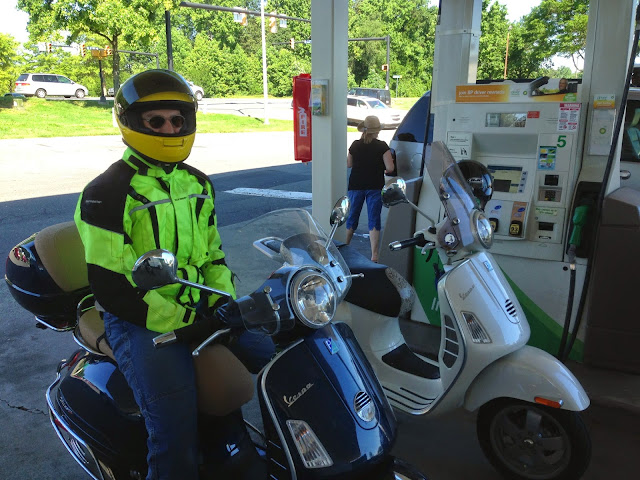 Adrian in his gear at Fort Mill, NC. 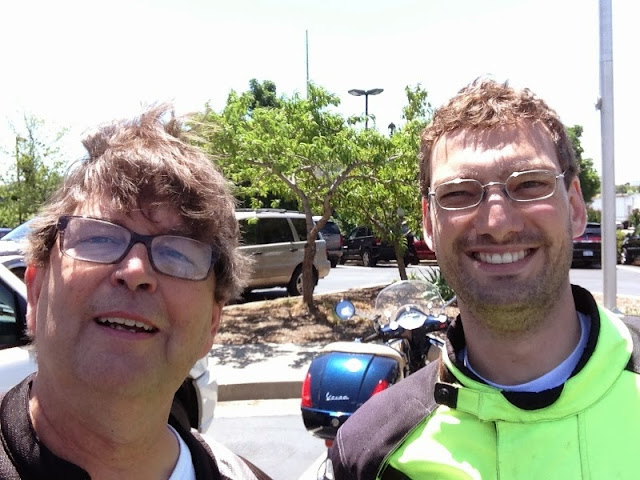 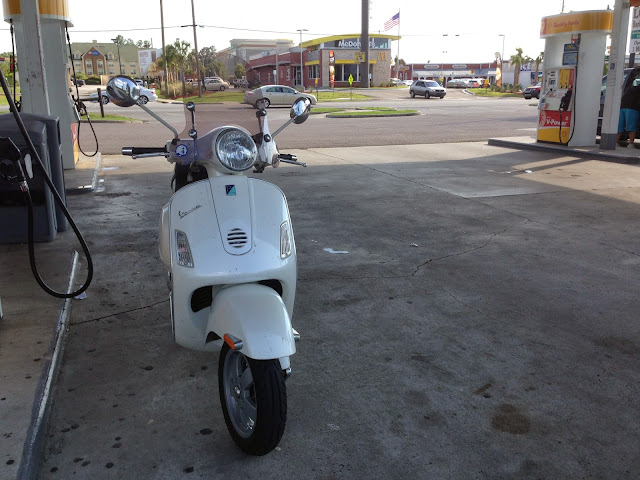 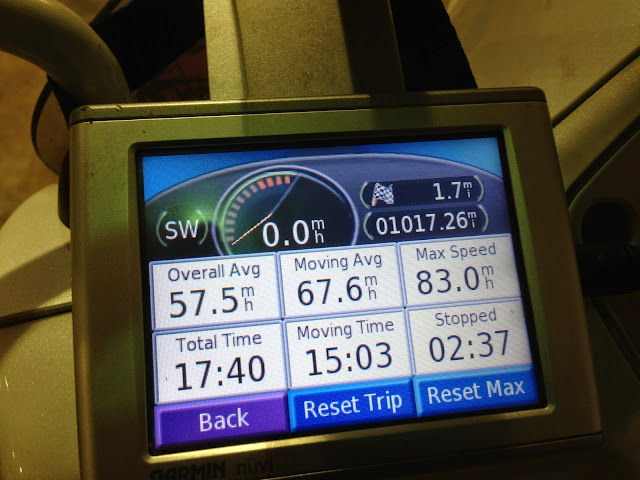 The GPS at the Shell Station on Roosevelt.  15:03 time moving.
Not bad for a scooter. 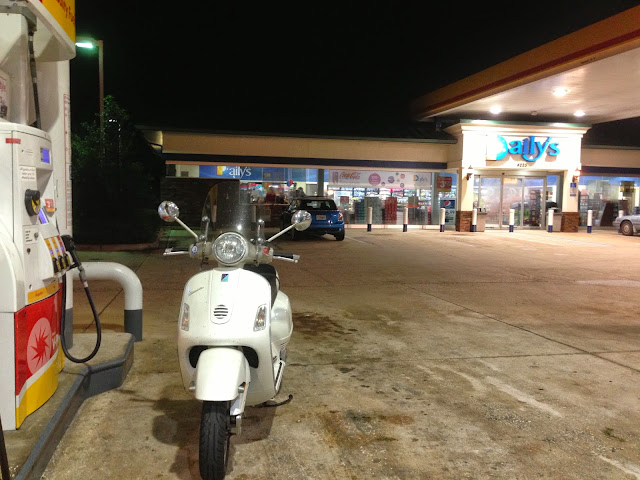 At the Shell Station.  I made it! 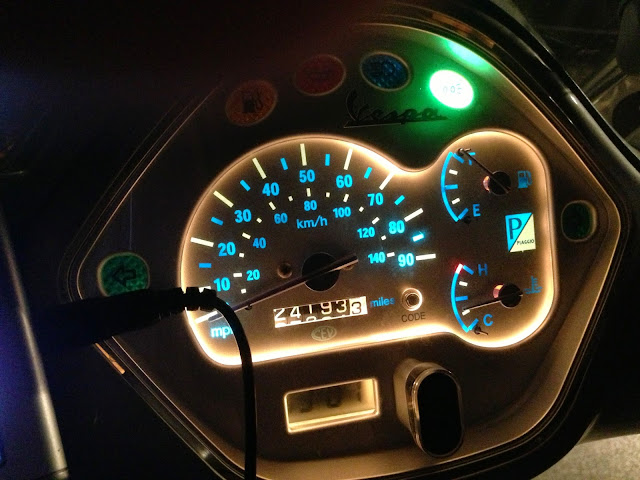