With tomorrow being the day to fly out of Jacksonville for Prince George, I had just one more long ride to post before the longest ever for me begins.

That was a ride I did to see my son Sam last October.

I had wanted to visit with him when he lived in Detroit, and scheduled an Iron Butt ride to incorporate into the effort.  It was just over 1000 miles from my house to his in Berkley, Michigan, making for a perfect Iron Butt ride.  But the two weekends I scheduled had weather issues that stopped that. So, when I purchased my Honda NC700X, I wanted to take it on a long ride to see how it would do.  Then I heard that Sam had to go to Detroit to pick up his Suzuki SV650S after the sale fell through.  So I decided to ride to Detroit, meet him and ride with him to Chicago.

Day one started early in the Jacksonville morning, around 4:30 if I recall.  I took I-95 north to I-26 around Columbia, then to Charlotte on I-77, just like my Iron Butt beginning.  This time I continued north from Charlotte into Virginia, West Virginia and Ohio to my scheduled stop in Columbus.  Day one totaled 830 miles and included a very uncomfortable butt due to the Honda seat.  I ended up stopping a couple extra times just to walk around.

I had a nice meal in Columbus, talking to another motorcycle enthusiast about rides and such.

I left Columbus before dawn to head to Detroit.  All went well until I hit traffic at a dead stop on I-75 heading into Detroit.  I got off the highway and negotiated my way to Berkley without coverage by my GPS map.  It was slow but I made it.

I met up with Sam at a bicycle shop on Woodward Avenue.  He had a friend with him, riding a Triumph Sport Bike, and the three of us rode to Ann Arbor for lunch.  From there Sam and I had a long, somewhat rainy ride to Chicago.

I spent two nights with Sam and his girlfriend Sara.  The third day consisted of me riding through the city, only 15 miles, then lunch, seeing the town with them in the car and dinner.

I left early the fourth day for the long ride home.  It was 47 degrees and wet when I left.  When I hit northern Indiana, it got drier but windier and colder at 41 degrees with a big crosswind.  I hadn't prepared for the cold so I wore my rain suit with layers of shirts and sweaters to keep me warm.  It worked except the pants flapped so much on the windward side that it wore a blister into the side of my leg.  One well placed rubber band stopped the flapping and made the ride much more comfortable.  I turned off of I-65 in Louisville to head to the Western North Carolina mountains, spending the night in Newport, Tennessee after a 600 mile ride.

The last day started a little later than the others after breakfast.  I then had an uneventful 500 mile ride home.

The seat to butt problem got better after day one.  I still want a new seat but might be able to get used to this one.  It was a very fun ride for me.  The Honda makes for a very nice touring bike. 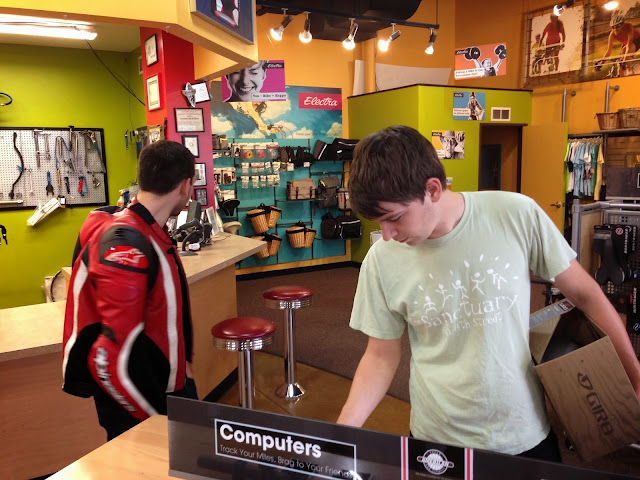 Meeting the boys at the bicycle shop after a 250 mile ride from Columbus. 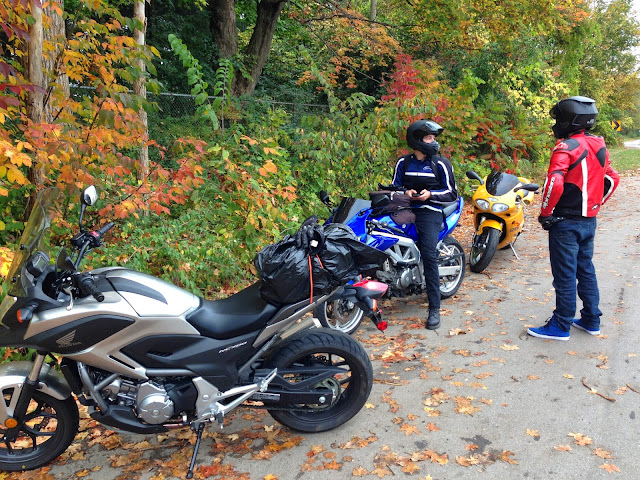 The three bikes in Ann Arbor 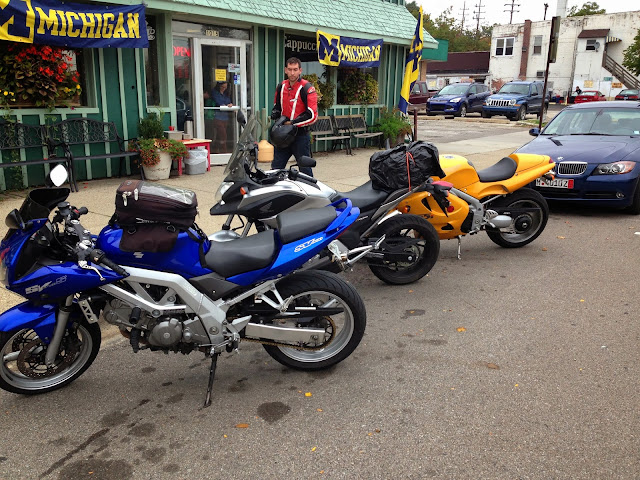 Lunch in Ann Arbor.  UM had a football game that day. 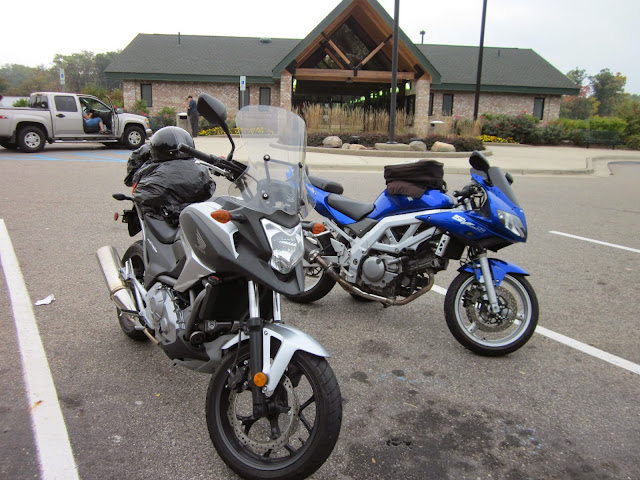 Sam's bike with mine at a stop to put on rain gear in Michigan. 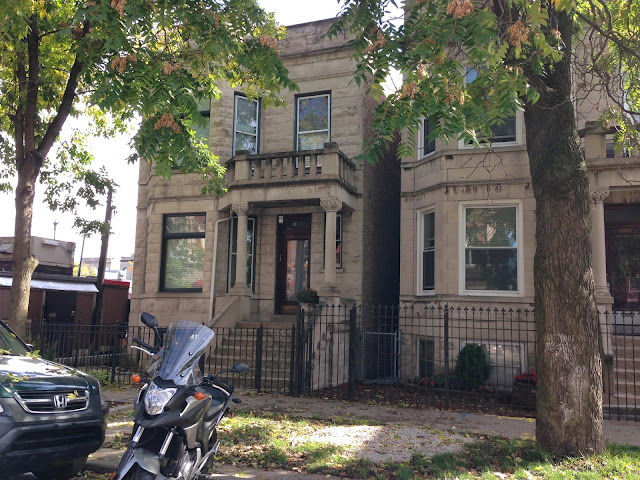 Sam and Sara's place in Logan Square.  They live in the basement. 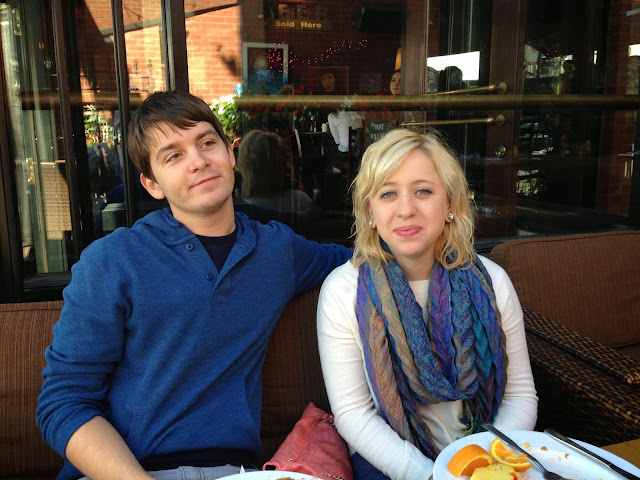 Sam and Sara at lunch. 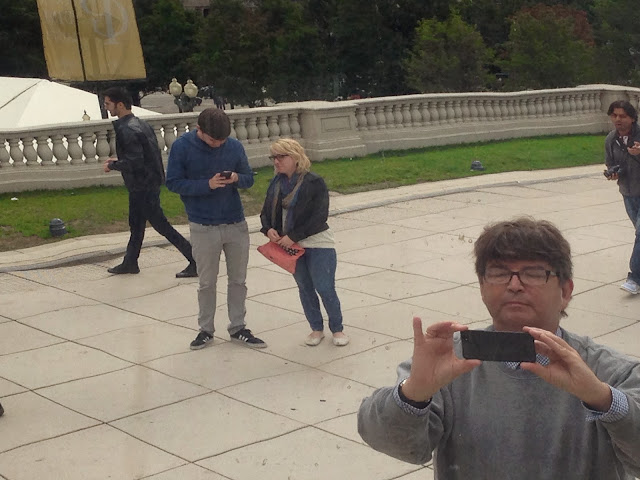 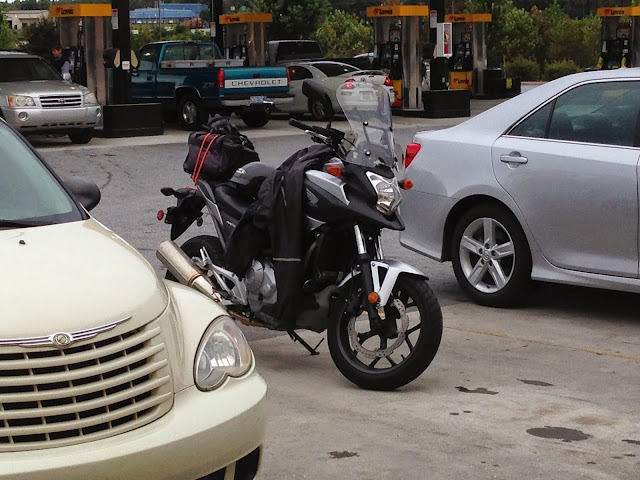 Fuel and lunch in North Carolina.
Posted by Bill Leuthold at 10:45 AM