I had a private message through Modern Vespa from my friend Ken (Lostboater) last week, saying that he was in town and wanted to get together for breakfast.  We arranged a place and spent three hours eating and talking.  Sometimes you meet someone who instantly becomes a best friend.  Ken is one of those.  We met earlier in the year when he came to Jacksonville to drop off his spare parts and tools for me to take to Doug (Old as Dirt) and Will (TNSooner) for the Scooter Cannonball.  Once I arrived in Stewart, BC for the start in Hyder, Alaska, we got together again for a ride and dinner.  He and I had dinner many of the Cannonball nights.

During breakfast we discussed visiting the Brumos Porsche Museum.  He is very good friends with Don, the chief mechanic for the Brumos Racing Team.  He also runs the museum.  Don was happy to oblige and we got a tour that afternoon.  And what a tour it was.  Just the three of us, until a new employee brought some friends in to see the cars.

The cars are a collection of Dano Davis, the majority owner of the local Brumos dealerships that include Porsche, Mercedes Benz and Lexus.  The cars include several of the Brumos Porsche racing cars over the years including the amazing 917-10 Turbo that dominated CanAm for a few years.  It included several of Peter Gregg's racing cars that I saw race in the 60's and 70's at local events and Daytona.  It also includes some of the best Millers in the country.  These are old Indy racers from the 1920's.  They even have a Jaguar F1 car on the wall.

There were street cars as well.  One of these is the very famous and valuable Porsche 550 Spyder.  This model is famous because it is what James Dean was driving when he was killed in an accident in California.  Don let me sit in it, quite a difficult chore getting in when wearing motorcycle boots and trying to keep from damaging the car.  I finally got in, but when getting out, he said the easiest way is to just stand on the seat and step out.  It worked.  The value of the car might be represented in the sale price of the last one that came up for auction.  It went for $3,600,000.

We spent two hours visiting and admiring the fabulous collection.  It was a real treat to have such a cool, inside look at the wonderful museum. 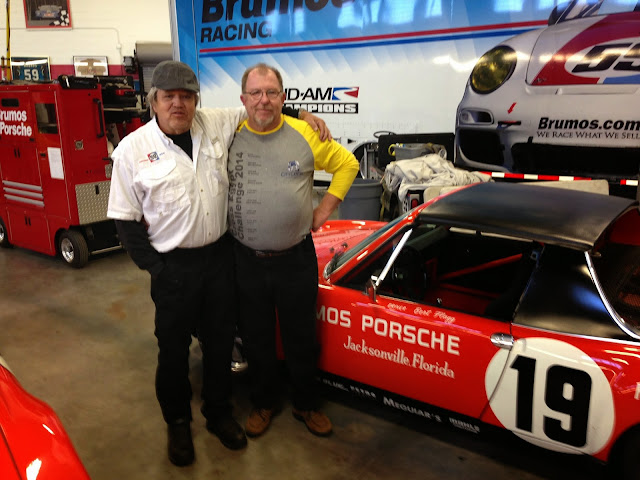 Don and Ken in front of a racing Porsche 914. 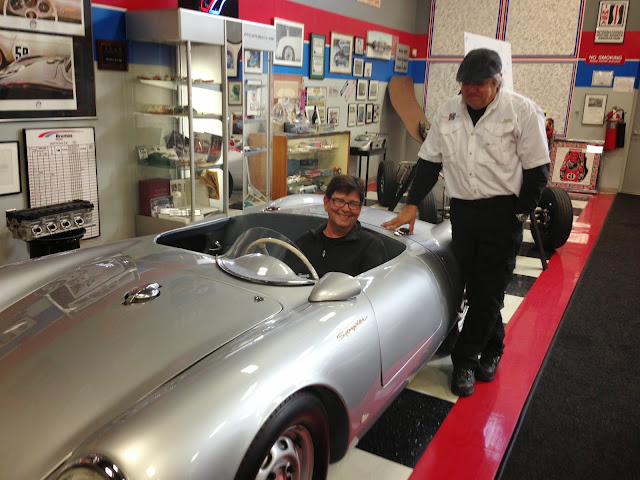 Me inside the 550 Spyder with Don looking on. 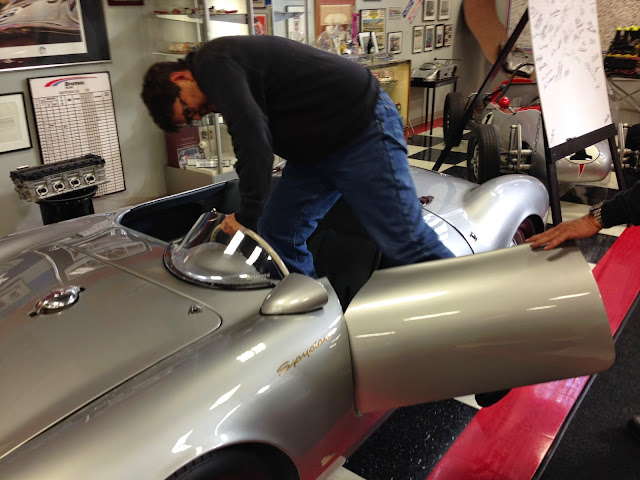 "Just stand on the seat" Don says.  ("it is a three million dollar car", I think to myself) 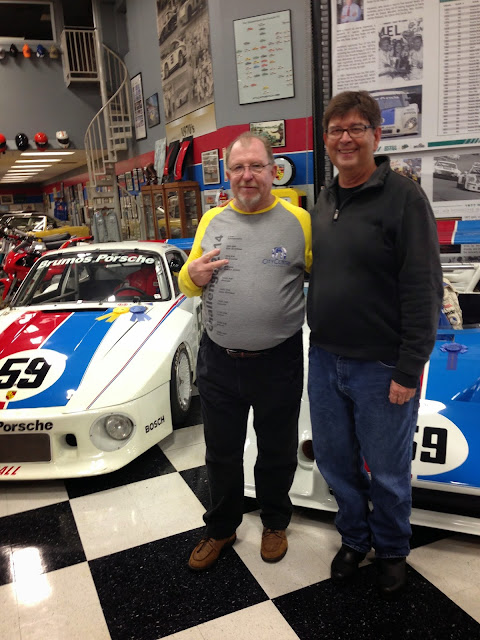 Posted by Bill Leuthold at 8:45 AM