This morning I decided to do all the outstanding work to get Vanessa ready for the Cannonball.

I started with the belt.  I have three new belts and felt it best to start with a new one.  With 4000 miles on the old one, it was the prudent thing to do.

So I got the cover off the transmission and then the clutch, variator and belt came out.

The belt was showing its age so it was a good decision to get it changed.

I also have a new variator to put in, but since this one has only 10,000 miles on it, and it looked so good I decided to keep it in.  But the rollers were looking worn with some flat spots so they
were changed along with the u-shaped glides.

The bendix has been inconsistent lately so I installed the new one I had recently purchased as well.

It all went back together easily until the last screw in the air box, but I got that in as well.

I then took it for a short ride that let me know that the installation worked well.

Then breakfast at The Fox with Sarah and Kylie.

When we got home I noticed that Mike McNeil had called to say I could pick up the newly mounted back tire.  So I got it and proceeded to get it installed.

Getting the old tire off went well until the swing arm would not move when pulled from the axle.  I tried and tried, even with a pry bar, but no luck.  I got out my pullers but couldn't get them to fit the irregular shape of the swing arm.  I sprayed it with WD40 and kept trying until I finally got a slight movement.  From there it came off.

The new wheel went on easily, including anti-seize on the axle at the swing arm, and I replaced the almost new exhaust gasket so I could start with a new one.  A test ride showed it to be good, so we are ready for the start. 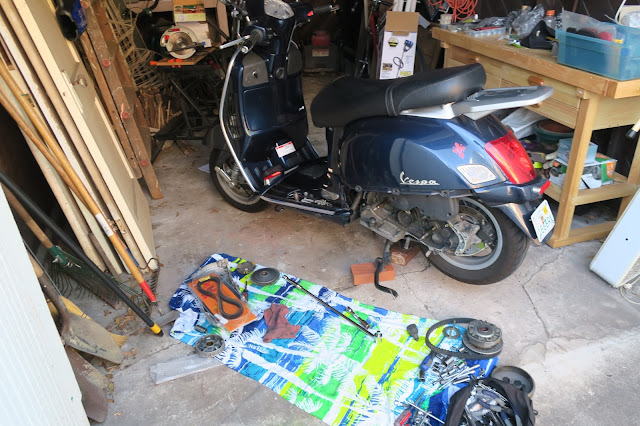 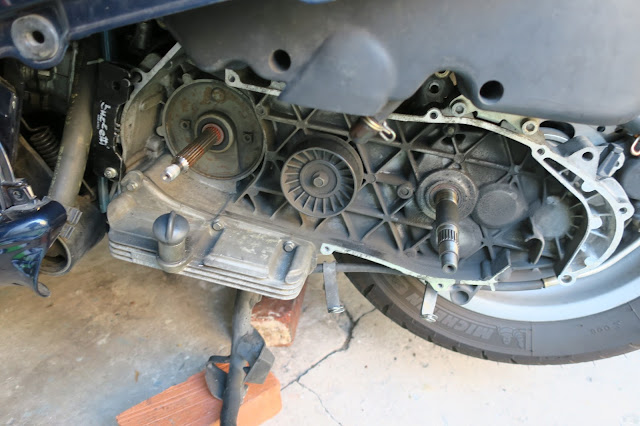 Posted by Bill Leuthold at 3:11 PM