I was riding Rocket today to deliver plans to a nice client.  While riding, I was reminded of the extraordinarily bad ride my butt had two weeks ago.

Because the Vespa seats are so good, I have always thought that riders who complained about sore butts were just lazy and wanting to stop a lot.  I had gone on two 1000 mile in a day rides along with four or five more over 500 miles and probably at least 50 300+ mile days.  Never a problem.

But my Honda NC700X was a problem.  The original seat caused me real discomfort on a long ride to Detroit and Chicago in late 2013.  On a 830 mile day from Jacksonville to Columbus Ohio, I was fine into North Carolina but found myself needing to stop every 75 miles or so to get off the seat.

I sort of got used to it on the 600 and 500 mile days home from Chicago but it left a mark.  I didn't want to take that one on long rides anymore.

So recently my friend, Drew, asked me if he could use it for his son Sean to ride from Denver to Banff and back this month.  I agreed but told him of the seat woes.  He wanted to do something to help the bike because he was borrowing it for a long ride but I refused the tires and chain that it needed.  I also refused the new seat but he insisted and showed up at my office with a new seat a few weeks ago.  It is a real beauty, but...

It is 630 miles from Jacksonville to Douthat State Park in Virginia.  I was fine into North Carolina again but beginning to feel the pain when I arrived to meet up with Adrian for the last 230 miles to the park.  By the time we got back on the bikes and had ridden 50 miles the pain started.  I squirmed and wiggled to try to find a comfortable spot to no avail.

Adrian let me borrow his Air Hawk for the last 15 miles but it was not long enough to see if it helped.
We rode for 7 or 8 hours on the next day too, all in pain for me.

So the next day I used a thick towel folded to make my Towel Hawk for a three hour ride.  It worked well, so for the ride home I bought a beach towel.  It didn't work and my total ride home was very uncomfortable.  So much so that I still feel it sitting at my office two weeks later.  I hope it is better for the Cannonball.

I called the seat company and they said to bring it in for adjustment and maybe reshaping and new padding to make it work.  I am quite sure that an Air Hawk would work, but the new seat should work too.  I don't like the idea of having a loose seat cushion on this beautiful seat.  We'll see how it turns out in the next couple of weeks.

In the meantime, the Vespa seats continue to be the best. 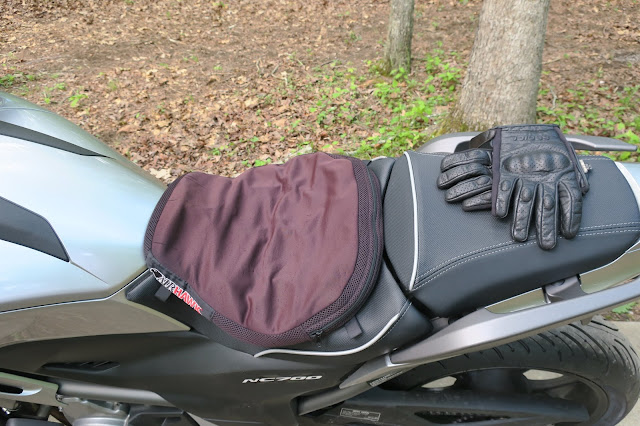 Beautiful, but painful, seat spoiled by an Air Hawk.  I hope the seat company can fix it.
Posted by Bill Leuthold at 5:37 PM