I have been struggling to decide on the scooter to use for the Cannonball.  Of my three, I think any could finish well. But Rocket, now at 71,000 miles, is so old that I am concerned that it has a good chance of breaking.  I have been enjoying riding it around town, even on a 150 mile ride to Gainesville with Ken a month ago, but I feel it best to leave it home this year.

Razzo has been the presumed scooter to take.  It has been almost perfect since I bought it from Mike Justiss a year and a half ago.  In that time we have ridden together almost 14,000 miles, including trips to Virginia, North Carolina, Pensacola, Apalachicola several times and even an Iron Butt loop around Florida.  Never a problem on any of the rides.  But recently the carburetor was running strangely, so I changed it.  It is now running well but not quite as well as.....

Vanessa, my 2007 GT, came to me by accident.  Literally.  She has been an expensive problem since I bought her from Leslie and Maria around a year ago.  Her issues are documented on this blog, including repairing the damaged leg shield, overheating twice when a coolant hose came loose.  New fuel filter and water pump.  She leaked coolant a couple of times after long rides, but that has stopped recently.  I have been checking coolant levels and they have remained at the max line for the past 1000 miles.  No drips on the garage floor these days.  Maybe it had too much coolant in the system.

Today, I took Vanessa on a long test ride.  I decided that running the first leg of Cannonball Day 1 would be a good way to see if she was the one,  I also wanted to test the route on both my old GPS and the new Garmin Zumo.  And I wanted to test the 2.2 gallon spare tank, using it to fill the tank like I will be doing on the Cannonball. 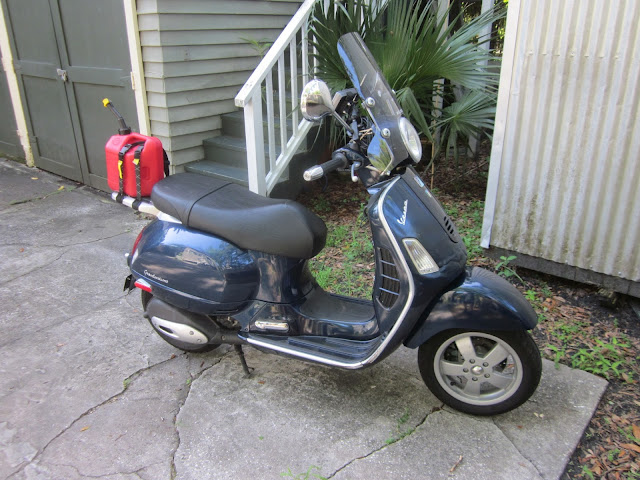 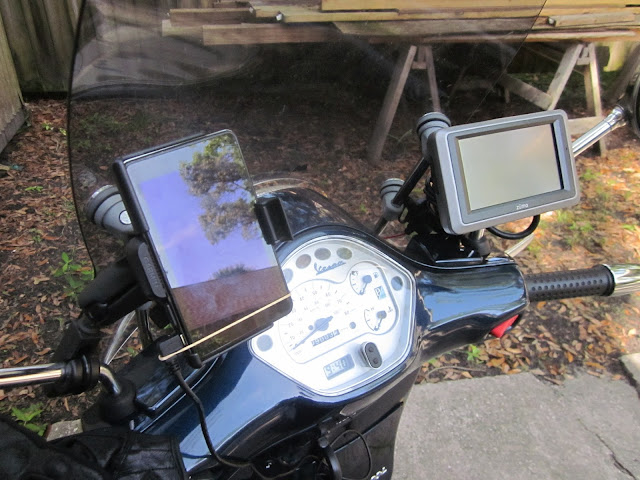 Everything worked very well.  The GPS's were perfect, the tank refilling was done in 4 minutes.  Sam had sent me some Roc Straps for Father's Day that I used for carrying the spare gas can, and they mostly worked except on a rough railroad crossing where I felt a weight shift and found no gas tank on the rack,  I turned around, looking for it laying in the road, but found it was hanging from the rack by the straps. They work but I must find a better way to attach them.  Maybe a new rack. 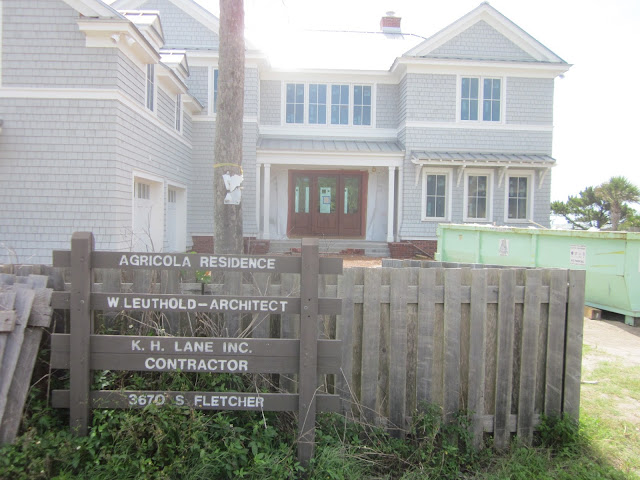 I stopped by the new house project on the way. 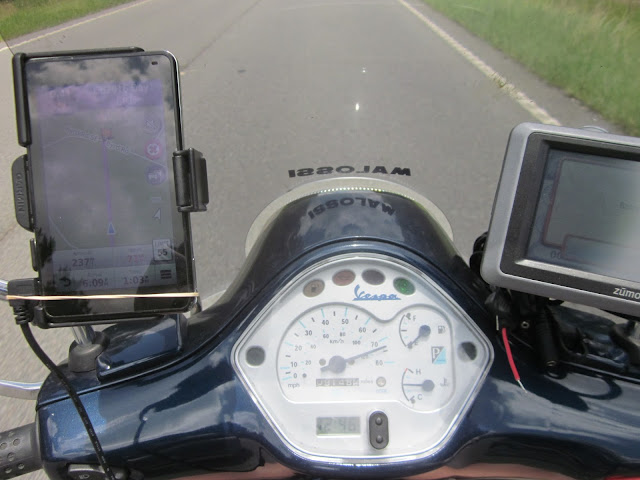 Approaching Check Point 1.  This is how I verify the locations, using the GPS.  Then I photograph the actual site while flying by.  I wouldn't mind if they required stopping, but I am fine shooting photos while moving. 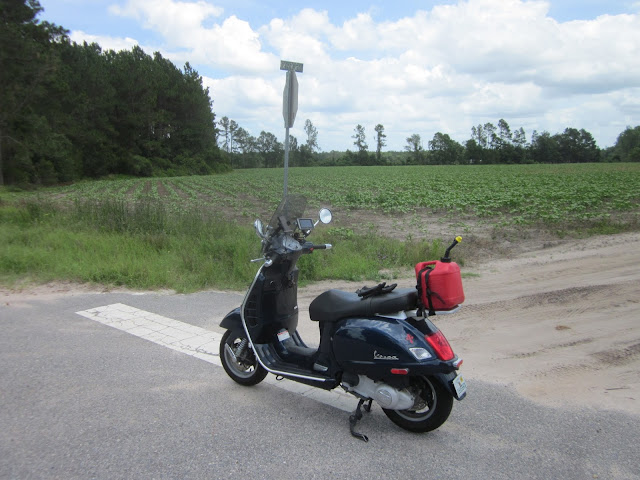 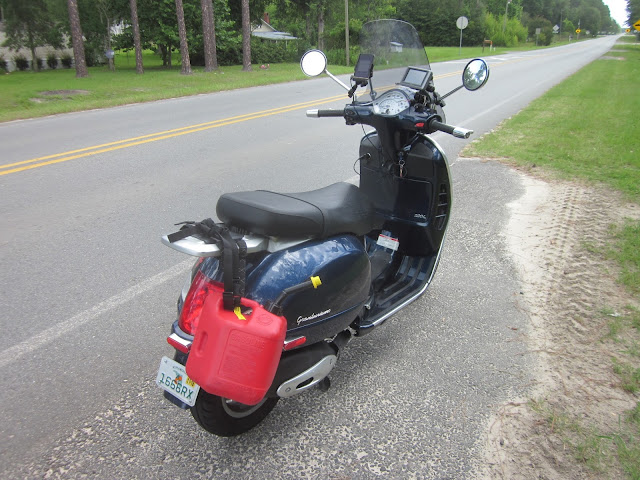 Some adjustments needed for strapping the spare gas tank onto the duckbill rack.

The ride ran from home to Fernandina Beach where the Cannonball will begin.  I have been looking at route options to Check Point 1, 19 miles north of Blackshear, Ga.  I got there quickly on my selected route, averaging right at 60 mph..  The return was on the fastest route offered by Google Maps, including several miles on I-95.  I am probably now going to take this one as well, as it goes through fewer towns and is barely longer than my route.  It includes 17 miles of I-95, where greater speed is available.  My scooters all run faster on the crowded interstate highways as the traffic creates a draft that adds significantly to the top speed.  Where I had trouble maintaining 75 mph on this windy day on the country roads, I was able to hit 80 mph on the highway. That will help the overall time in day 1. 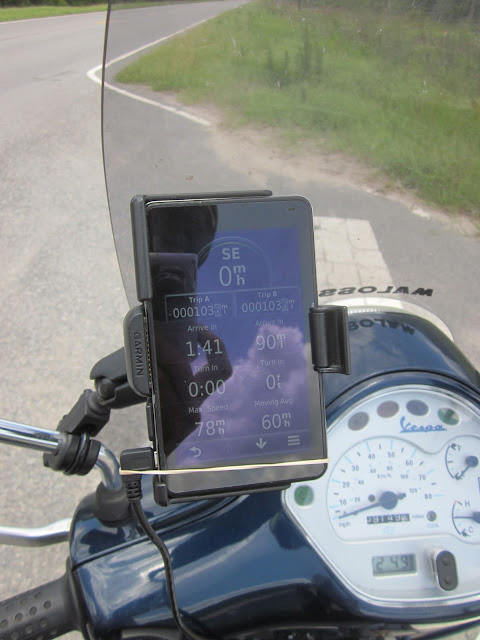 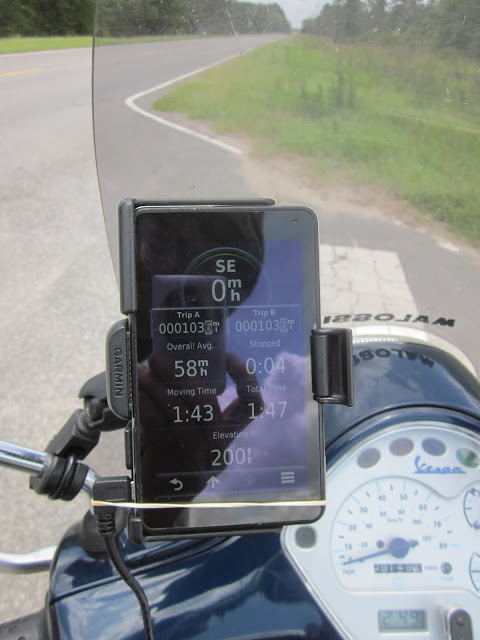 At the Check Point 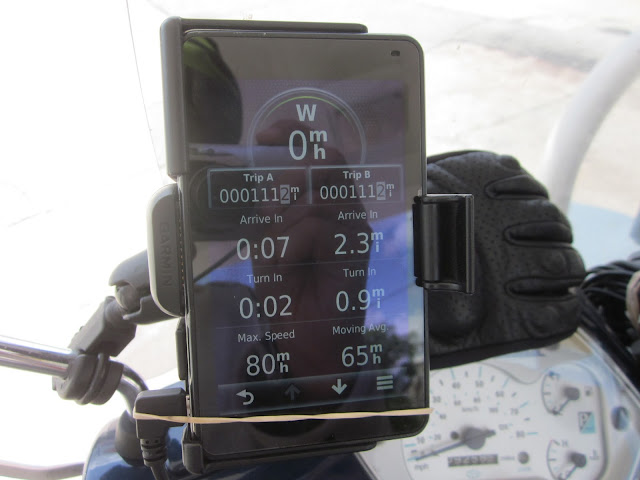 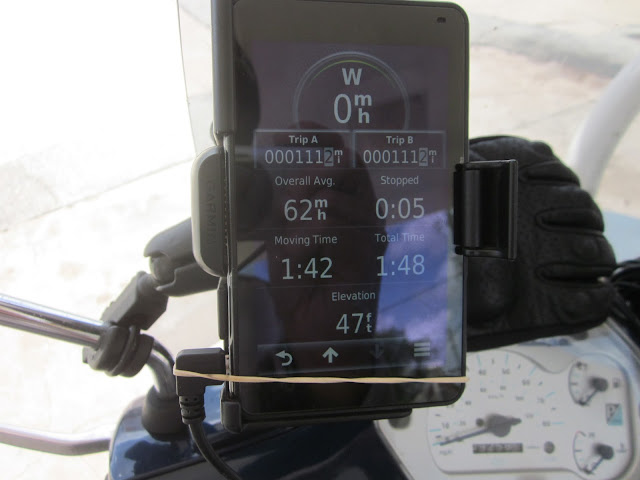 At home with much more interstate travel.

I then took Razzo out on the same stretch of I-95.  It was able to run there at the same speeds as Vanessa.  But I am feeling that Vanessa is just a little fresher with only 10,000 miles vs 20,000 on Razzo.  I am leaning to taking the girl.  Another reason is that with the way I ended up owning her, it feels that it was meant to be.  A partnership of destiny.