I lost confidence in Rocket a couple of months ago, when it stopped running and stranded me three miles from home.  I had to push it to my office, closer than home to where I was, where I left it in that garage.  The next day it started normally and has run without repeating the issue since.

But after that, I have been limiting rides to pushable distances from home.  I gave in to the Seafoam promoters and used that in a couple of tanks of fuel.  It appeared to help.  Then last weekend, I changed the oil. oil filter and air filter.  To top it off, I followed a Wiki article in Modern Vespa and disconnected the evaporative collection system from the carburetor.  It was a very satisfying day's work.

After that, I took it for a 50 mile ride, beyond the pushable limits I had set, and it ran terrifically.  That run included ten miles on I-10 where it ran near wide open throttle for long enough to kick in the top speed problem it has been having.  But it didn't slow or heat up, so that may be behind us now too.

So, with new confidence, I had to ride a wonderful trip up Heckscher Drive and A1A to Amelia Island to visit the jobsite of a new house I designed.  It is 40 miles each way and includes everything from I-95 to South Fletcher with it's 35 mph speed limit.

It was an eye opener.  Rocket ran great the entire way.  None of the old problems showed up.

Then, last night I rode it to the 7 Bridges Scooter Club Tuesday dinner ride toward the beach.  Another 30 mile ride.  Again, perfect.

I am now tempted to use it for this weekend's Oyster Tour to Clewiston and Avon Park.  That will be around 700 miles.  If it can do that successfully, who knows.  It might be coming around to be the right choice for the upcoming Scooter Cannonball Run. 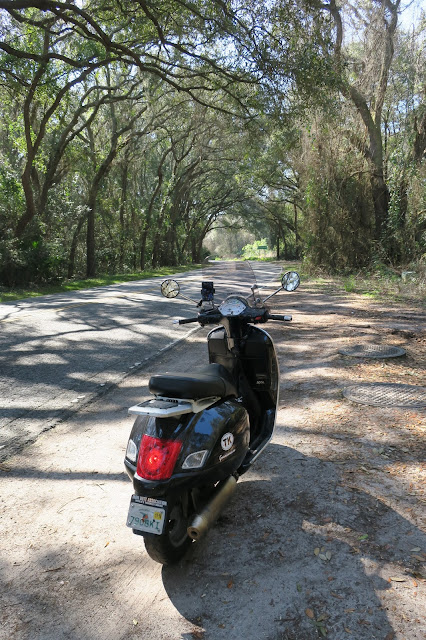 Rocket on the Amelia Island Parkway.
Posted by Bill Leuthold at 7:54 AM