I met up with Ken and Gary in Clewiston with the intention to Canoe and Kayak Fisheating Creek, a thirty three mile morning ride away from our hotel.

Ken diverted of the highway down a two lane road that opened up to an amazing flat plain of mostly sugar cane.  We even saw a flock of flamingos, four pink, the others white.  They launched in flight briefly, but I fumbled with my camera and only got them landing, near the ground. 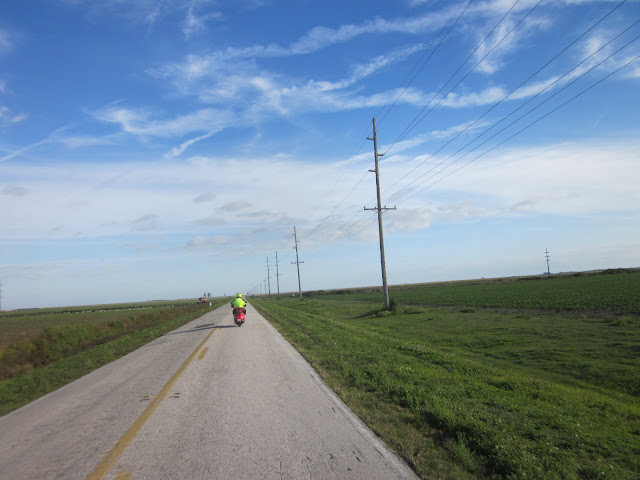 Flat, as far as the eye could see. 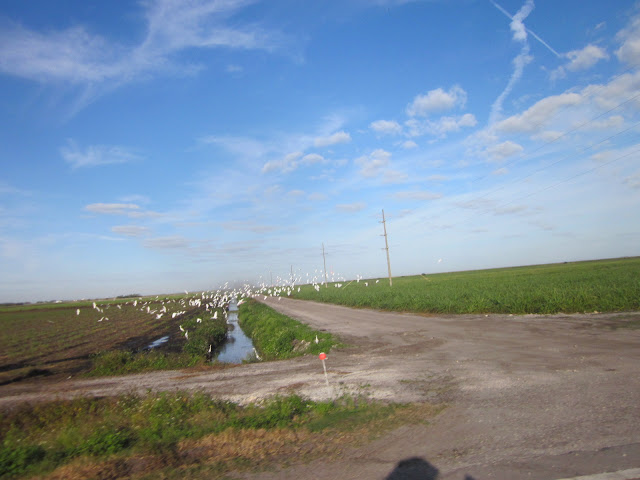 From there we went to the Fisheater Creek Outfitters where we met up with Ken's friend Dave and were given a canoe for Gary and Ken, and two kayaks, one for Dave and one for me.

A friendly, but a bit too political, guide drove us to the drop off point where he sent us on our way for a seven mile, four hour tour. 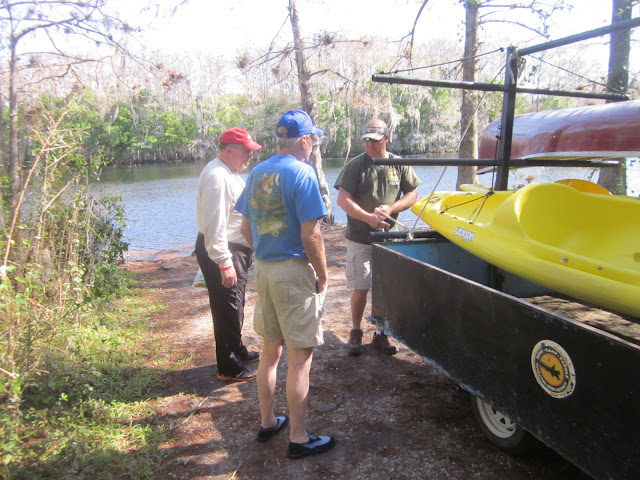 We started in a relatively large lake and made a quick turn down another wide portion of the creek.  But we quickly approached a small sign that told us to turn right into nothing but a forest of cypress trees.  It confused us for a while but the current was certainly running that way and we finally spotted a tree with a blue stripe in the distance that confirmed that it was the route. 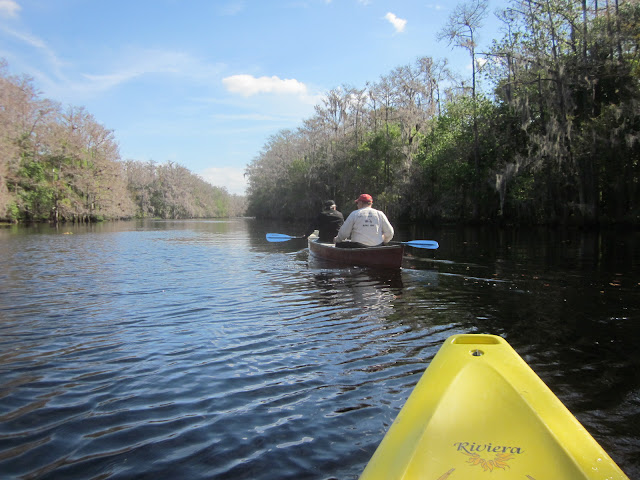 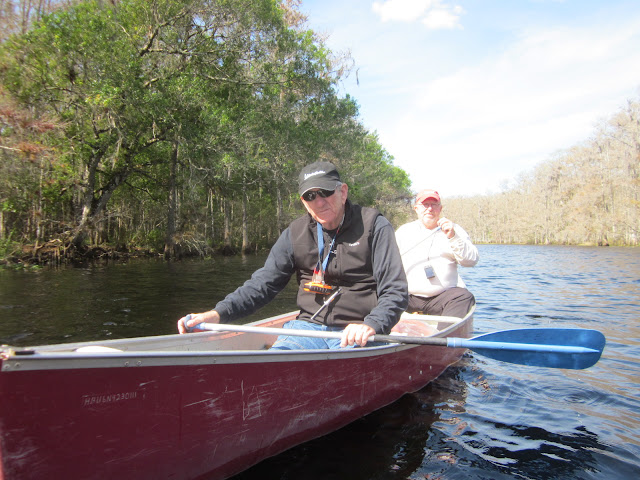 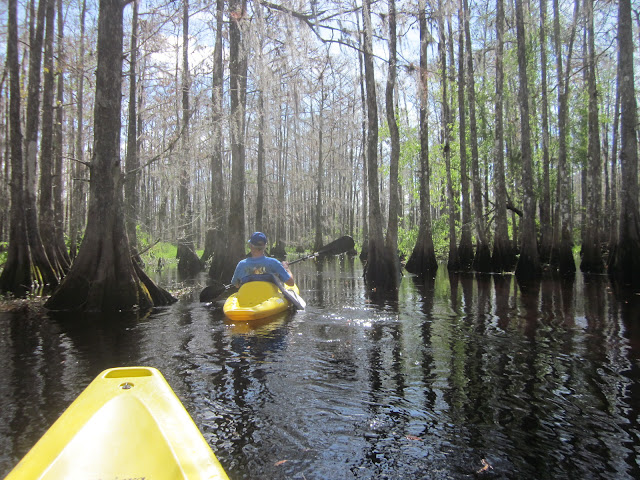 Where it got narrow 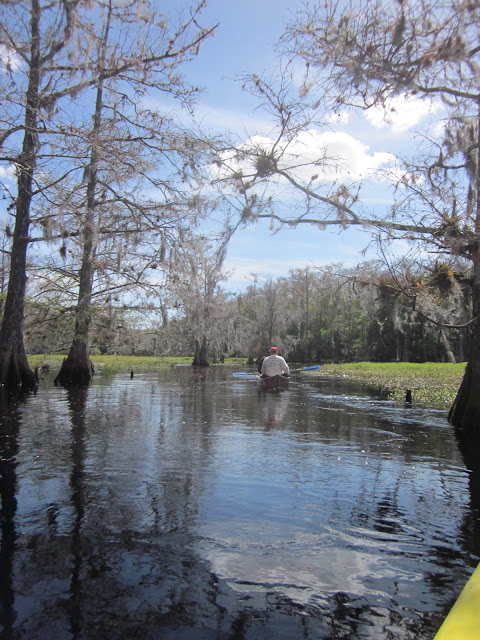 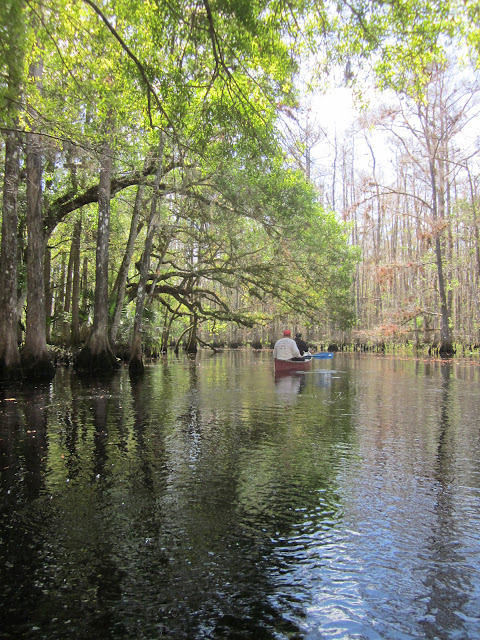 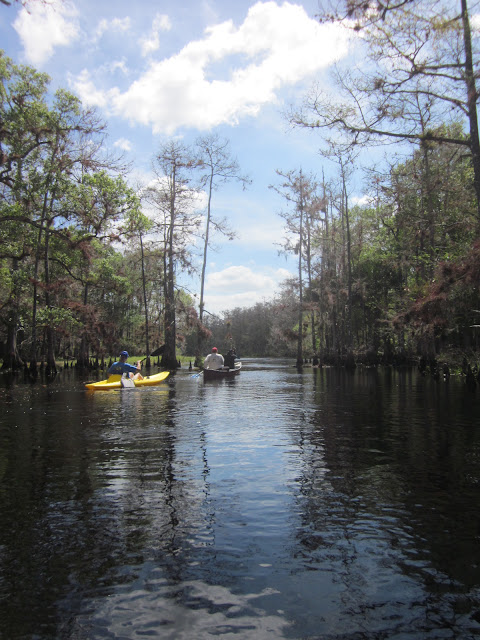 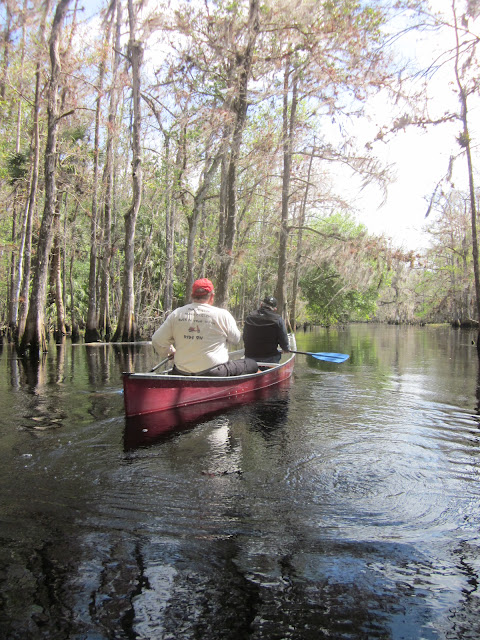 Ken and Gary in their canoe 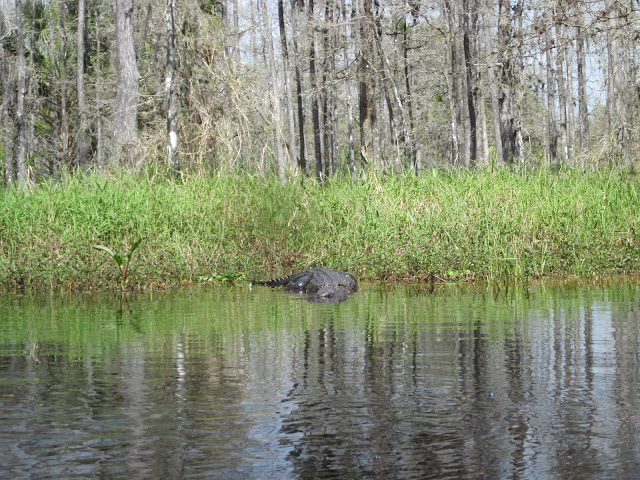 An alligator checking us out

We went from lakes to narrow parts of the creek several times before coming to the end.  The weather was perfect for the trip, cool and breezy with the sun shining the entire way.  It was uneventful except for my burned feet and a little grumpiness.

We left the Outpost with Razzo's fuel tank on empty, low fuel light bright and steady.  I hoped that there was a gas station close by, but the nearest was 25 miles north.  Believe it or not, Razzo can travel that far without running out.  I put 2.4 gallons into the 2.4 gallon tank, so it was near the bottom.

Then we had lunch at Beef O Brady's where, upon leaving, Gary's 300 GTS balked at starting.  It did start but he was concerned.

When we arrived at the Jacaranda Hotel in Avon Park, we left the scooters out front.  I went to the room and Gary came in looking worried.  His scooter's starter had given out and we were looking for a solution.  Ken thought it to be low battery so we went to the nearest auto parts store and borrowed (I had to leave them my Visa card) a jump starter.  But Gary didn't want to use it, instead, renting a U-Haul truck to take the scooter back to Dothan.  When he got the cost, though, he declined, so we had to come up with another idea.  It finally was decided to get Dave, the kayaker, to borrow a trailer, pick up the scooter and take it back to Ken's house in St. Petersburg.  Gary then got a rental car to get home.  He will sort it all out over the next few weeks.

It was a wonderful ride,  I highly recommend doing the Fisheating Creek boat trip.
Posted by Bill Leuthold at 5:18 PM