After the turmoil that has been Vanessa over the past few months, I went to the scooter warehouse last weekend and decided to take the coolant hose off of Zoltan's GT (one of my previous scooters).  It wasn't really on his whole GT as the engine ate a valve last year and has been undergoing repairs since.  The engine was sitting on a table and the hose was loose, laying under the engine.

Russ and I, mostly Russ as that is just him, took the bad hose off Vanessa and installed the new one.  I also checked the rear tire pressure to find it was holding air.  Then after refilling the coolant, I took it for a thirty mile ride, the last 15 at 65 to 75 mph on the highway.

I got back to the warehouse to let Boris know that it was running great, with no signs of damage from the two overheating episodes caused by the crappy hose.

But after the brief celebration, I got back on to go home, but looked down to see coolant on the asphalt.

Boris had noticed a small leak coming from the water pump before the most recent hose disconnect.  We cleaned it off and were hoping it would go away.  It didn't.  The leak was not great enough to stop me from riding, but it had to be repaired.  Boris recommended a new water pump.

So here it is, along with the o-ring and bolts.

If this does not get her stabilized, it is really time for the junk yard. 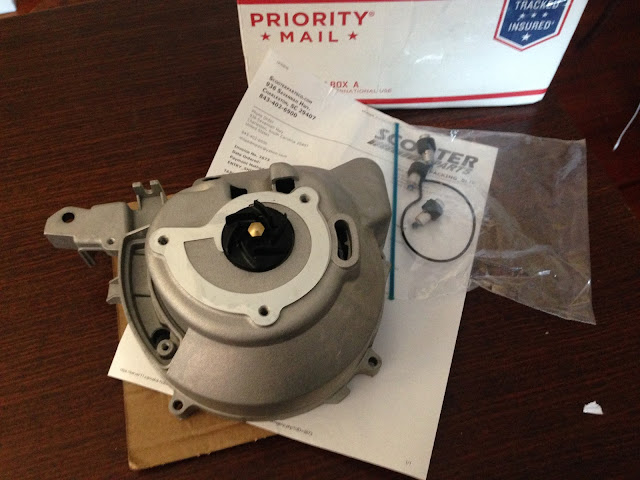 Let's all hope that it works.

Posted by Bill Leuthold at 4:30 PM