Ken Wilson, Lostboater to many, planned another Oyster tour for the past three days.  This is the third of 2015 and was as much fun as the others for me.  Meaning lots of fun.

It was supposed to start with me meeting him in Apalachicola on Monday.  But I had a business dinner scheduled to meet with prospective new clients, good friends of one of Sarah's best friends.  They want to move forward, so beginning in January, I have another house to design.

Because of that, I decided to ride the 208 miles to Albany, Ga to meet Ken as he was moving from the panhandle through Dothan, Alabama and Albany. 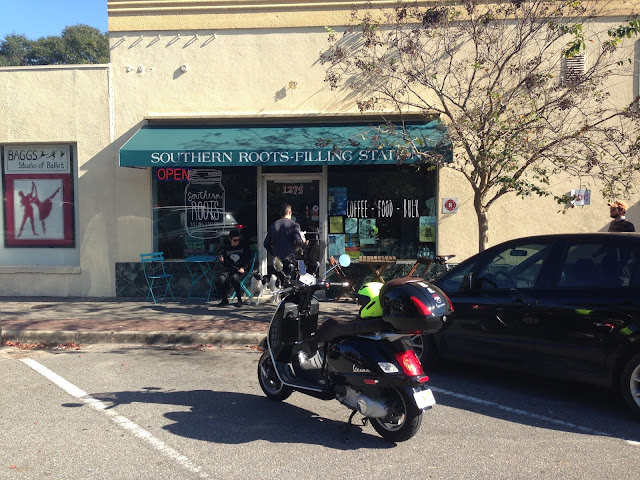 First stop was for a healthy lunch at Southern Roots

We stayed in a nice hotel that he had selected, Merry Acres.  It had a nice pub on the grounds that we took advantage of, along with a shuttle to various restaurants.  We selected the Catch, a seafood place a couple of miles away.  I had Monkfish.  Never had that before.  It was tasty. 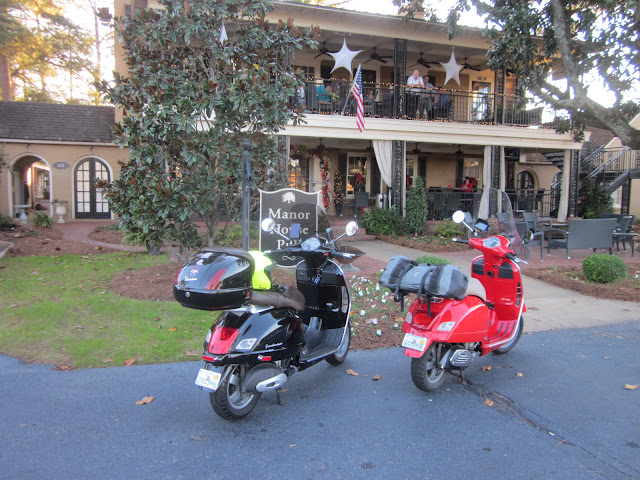 Two scooters in front of the Pub.

I awakened Ken too early, then we had breakfast at the hotel.  Ken wanted to see a memorial for Ray Charles in a park in Albany, so our first stop of the day was there.  On the speaker system there, Blueberry Hill was playing. That is supposed to be a Fats Domino song, but Ray played it too and the tune stuck with me for the entire day. 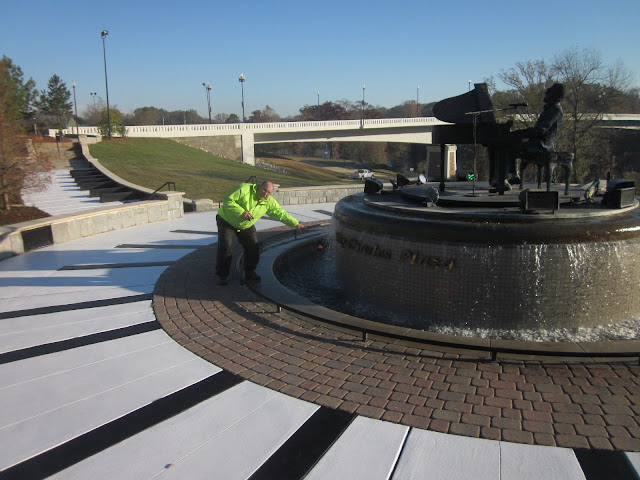 Ken at the Ray Charles Memorial

From there we had a fine 90 mile ride to Douglas, where we were to meet Jim Mandle and Stephanie Yue for a tour of the restoration of a P-82 airplane in a hangar at the airport.  Jim arrived promptly but Stephanie was delayed as she rode through the cold from Atlanta.  While waiting, we had lunch at the Flyin' Cowboy restaurant, where there was a mock plane crash outside. 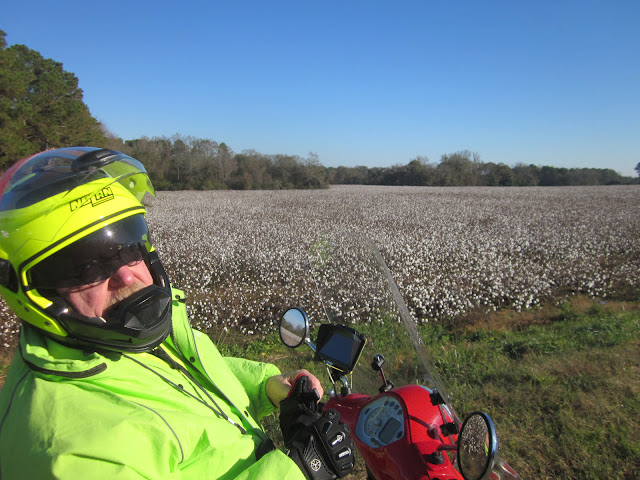 And if those cotton fields are rotten, you don't get very much cotton. 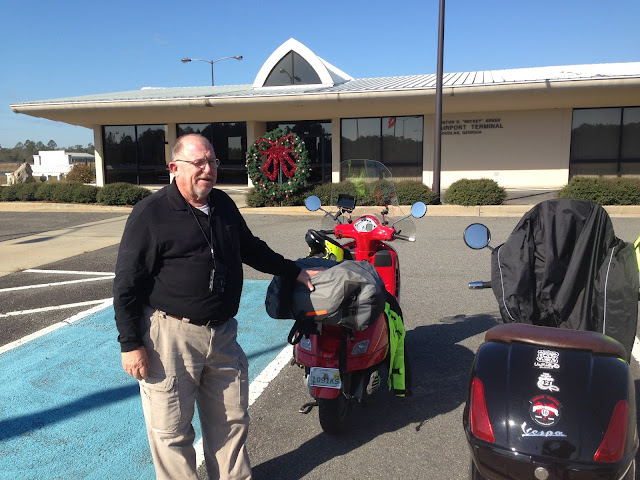 Ken, Big Red and Razzo waiting at the Douglas Airport 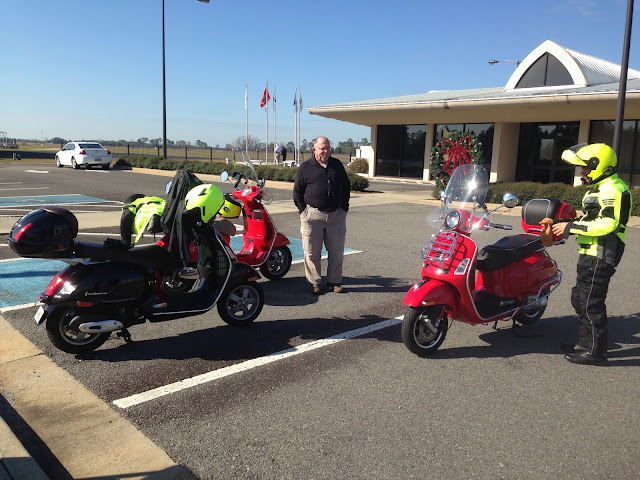 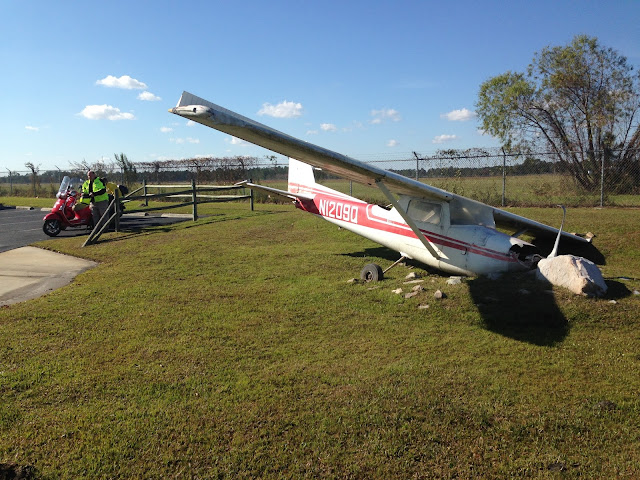 We then went to the hangar to see the remarkable airplane undergoing restoration.  It is one of only 235 built.  I believe I heard that only five exist today.  It is seven years into an eight year effort and will be in the air at this time next year.  I marveled at the complexity of the effort. 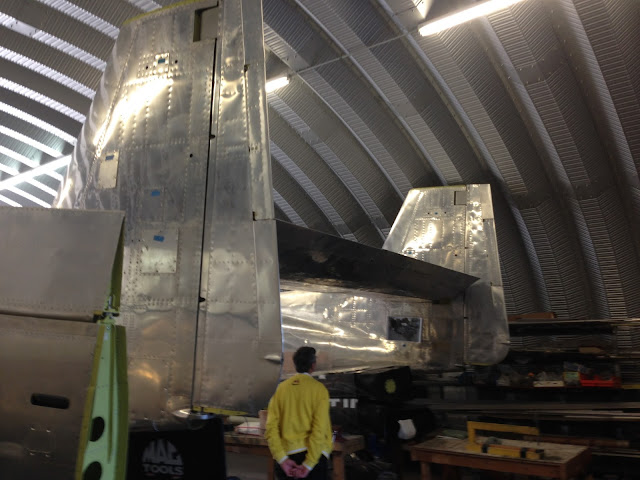 Jim and the P-82 under restoration. 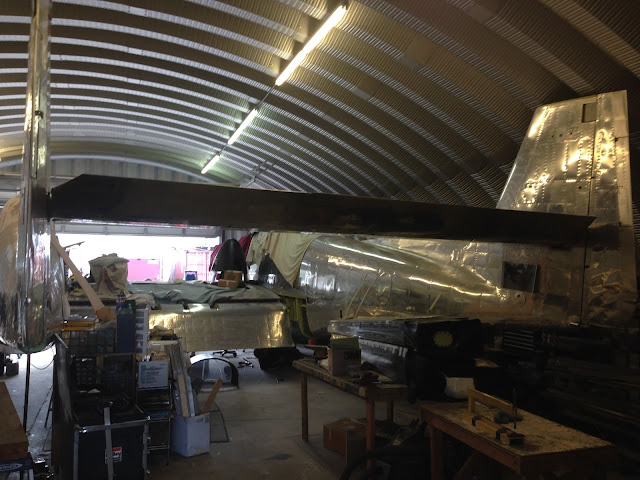 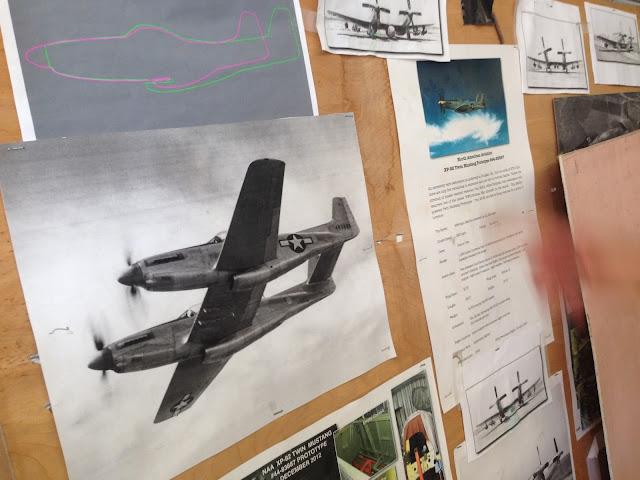 Picture on the wall of the plane flying 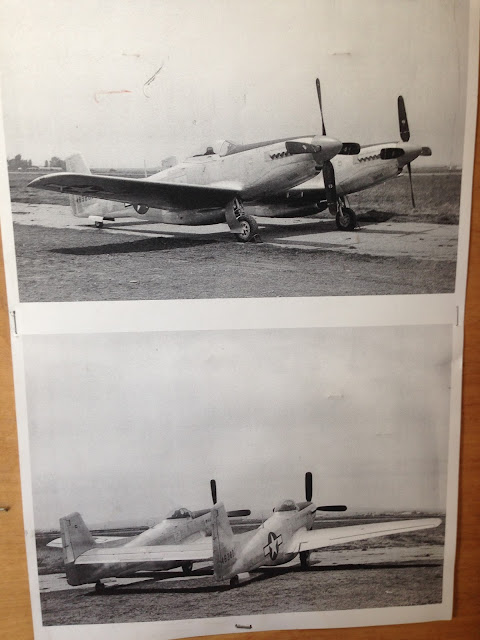 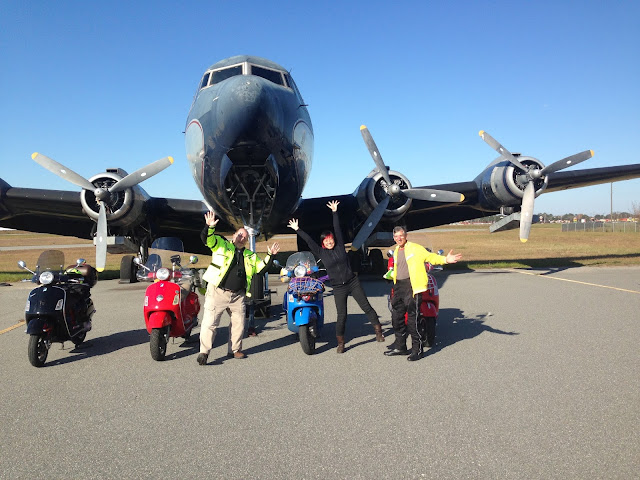 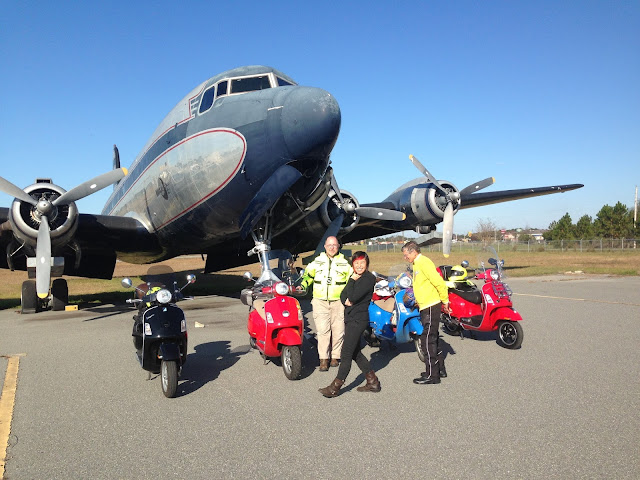 Four scooters and a plane 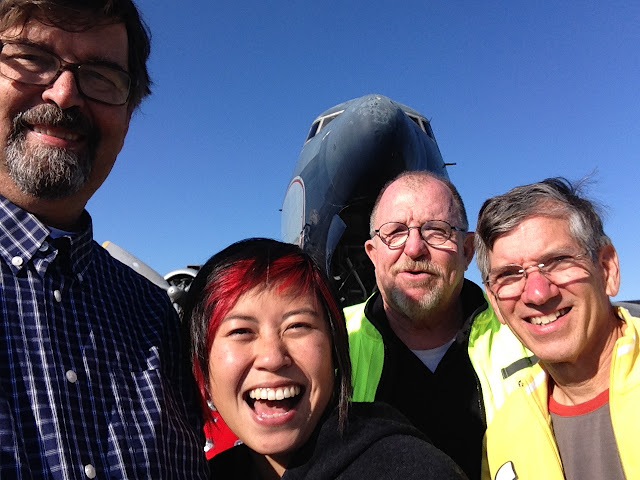 We then headed south for the 90 mile ride to White Springs, Florida, where Jim had arranged a cabin for the night at the Stephen Foster State Park along the Suwanee River.  When we arrived we could see the Christmas lights that had been set for public display.  After dinner in Live Oak, we walked the grounds to take it all in.  It is a beautiful place made special by the displays. 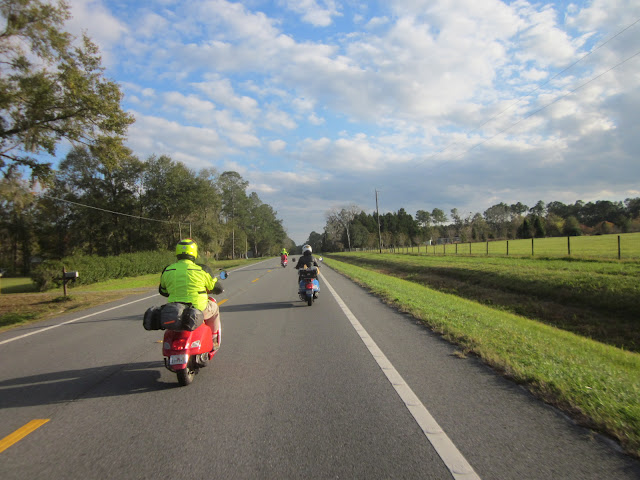 An unusually beautiful day for a ride 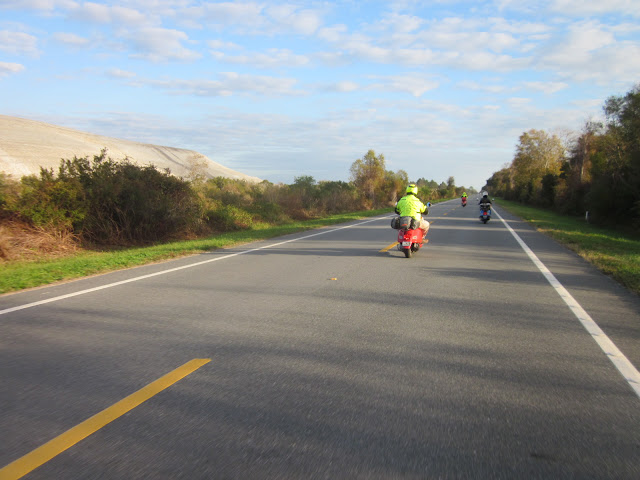 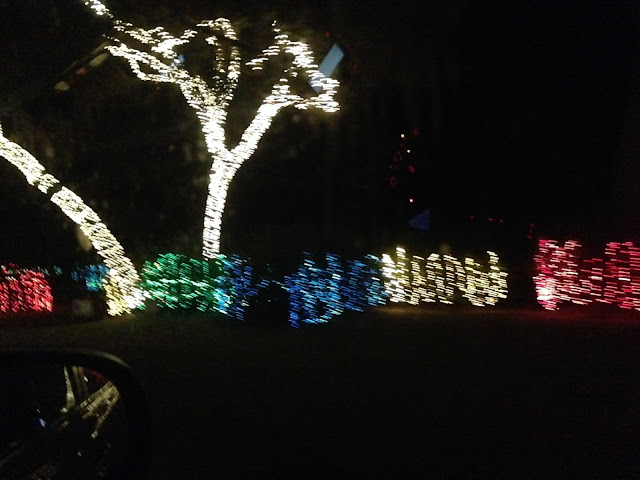 Blurry shot of the lights at Stephen Foster State Park 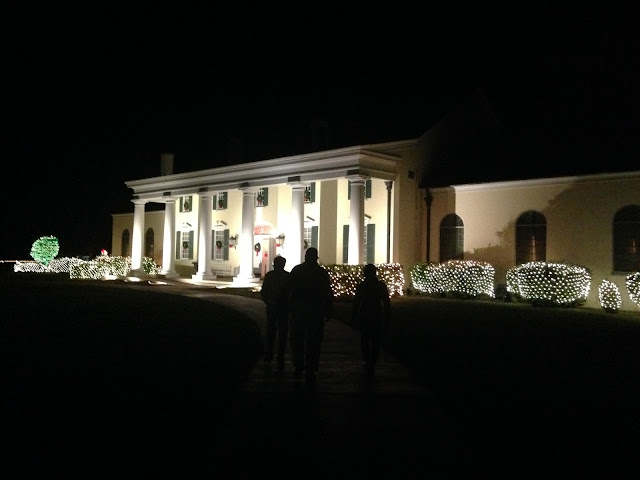 Lights at the museum in the park

Back at the cabin, Stephanie serenaded us with her ukulele, even singing to a song.  She tried Stephen Foster's Suwanee River, but had never heard it before so it was a challenge for her.  She decided, after reading the words, that it was a sad song and abandoned the effort.

In the morning, Jim brought breakfast and Ken and I departed at around 10:30, Ken heading south with me going east.  I stopped at Everybody's in Baldwin for a pork chop and vegetable lunch. 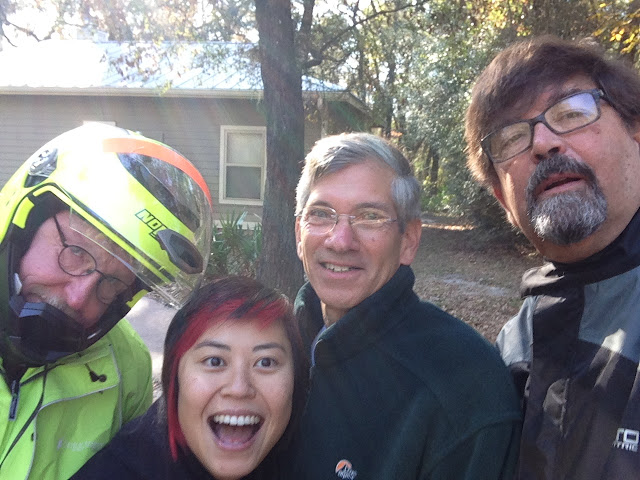 On the way back home 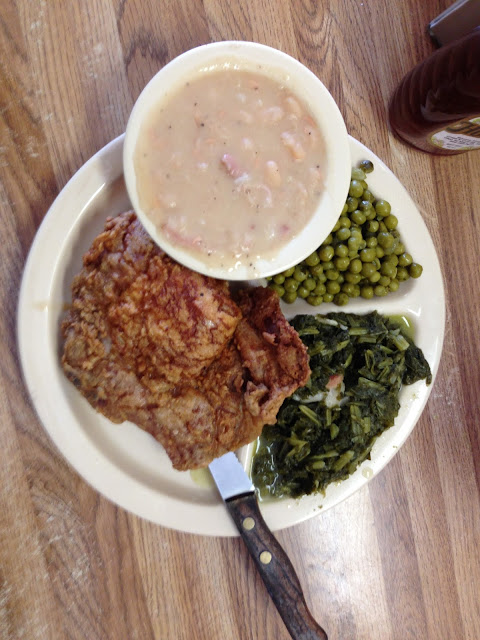 What a great way to spend a couple of days.