I had planned to take a ride with Sam from Sparta west into Minnesota and then south along the Mississippi River into Iowa, to Lansing. Then cross the river and make our way back to Sparta via the beautiful county roads of western Wisconsin.  We were considering a time and thought we would take the planned Wisconscoot ride, then our ride after that one was finished.  But after the Friday ride took about twice as long as anticipated, we chose to do our ride at the same time as the planned ride, then meet the group for the planned lunch in Cashton.

So Sam and I headed out I-90 to LaCrosse.  It was a good opportunity to test the speed of the Sullivan's GTS vs my usual GT rides.  I found it fine for acceleration, similar to Razzo, the faster of my two.  As for top speed, it ran right up into the 70's with the rev limiter cutting the ignition at exactly 76 mph on the GPS.  It is as fast an my GT's on level ground, but mine run well over 80 in the perfect conditions of downhill, downwind with any other help possible.  I would say that there is no Cannonball advantage having the GTS other than speed potential at high altitudes and climbing hills.  With the handicap advantage of a GT over a GTS (113 to 114 for a GT, 122 to 123 for a GTS) a GT has up to a 30 minute advantage on a 6 hour ride.  No contest in my opinion.

Bob Copeland, one of the participants in Wisconscoot from Minnesota suggested we go west of the Mississippi river and pick up some better country roads, including the Iowa River Road that ran in the Iowa River valley.  Very nice roads.  Then we headed to Lansing, where we got some fuel and reprogrammed the GPS for the ride to Cashton, with Sam picking the route.  He selected some very nice roads. 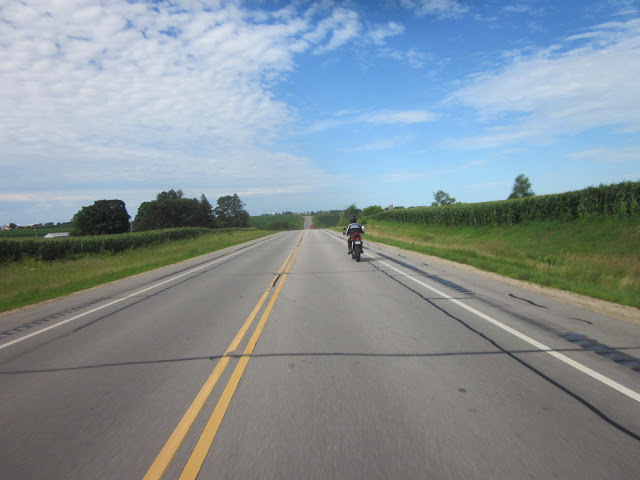 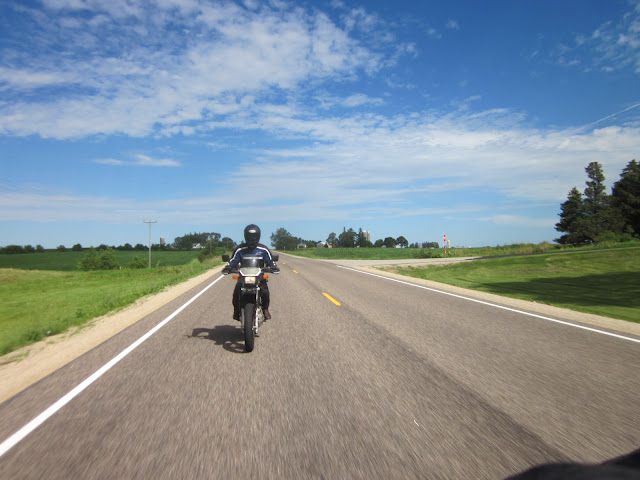 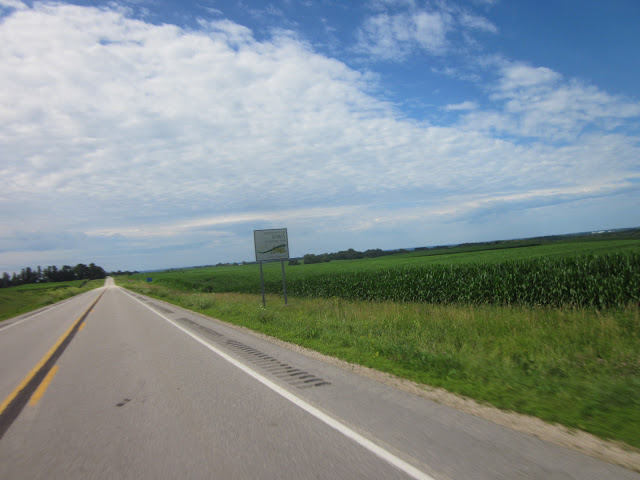 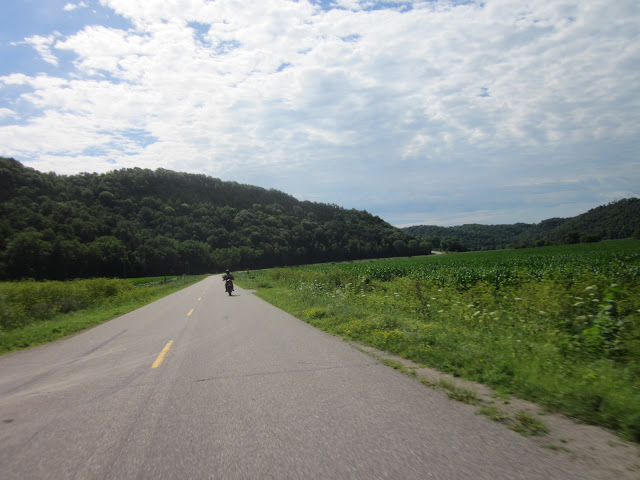 Along the Iowa River Road 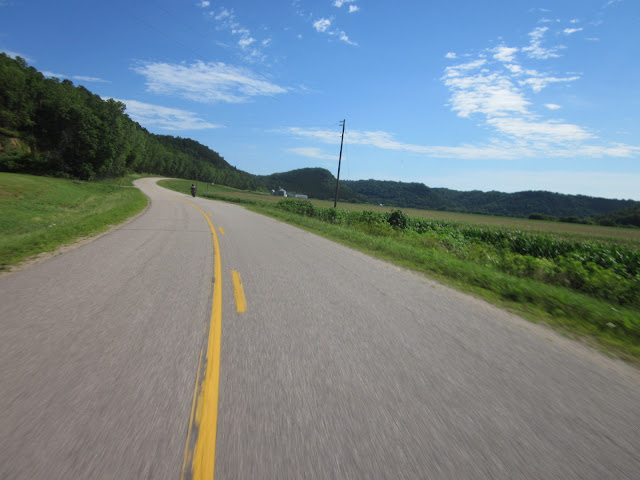 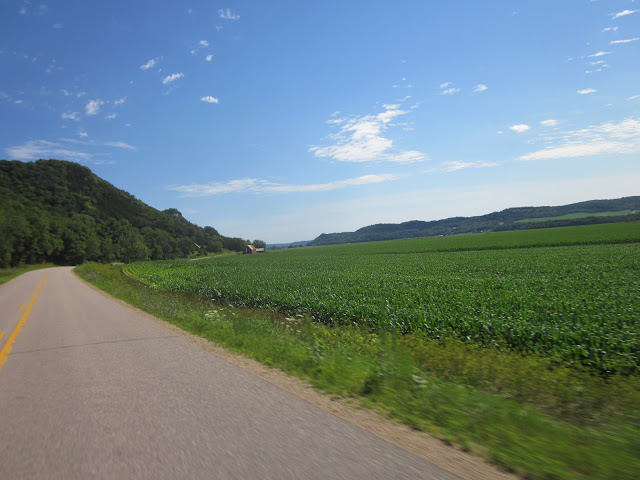 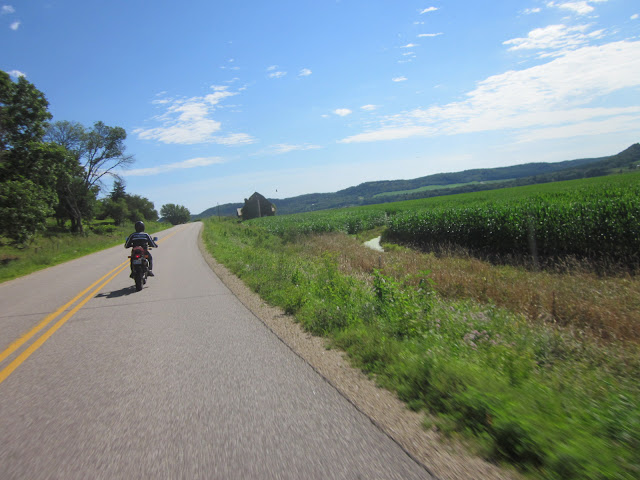 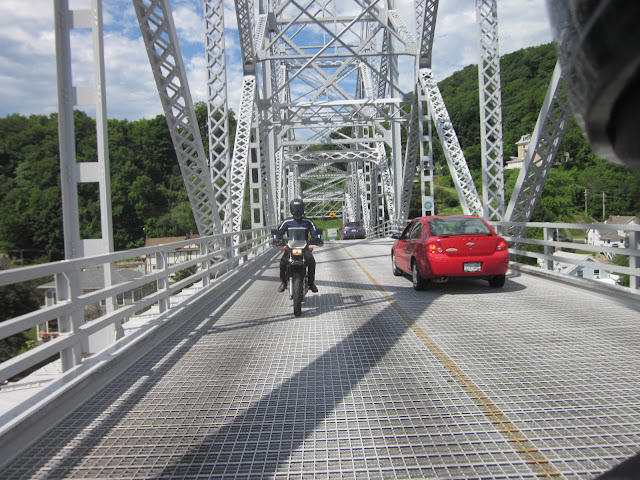 Crossing the Mississippi River in Lansing, Iowa on the world's worst bridge.  All grating with steep legs up and down with the transition to the flat with no softening radius.

Where Garmin said in Lansing that we would arrive in Cashton at 12:45, we actually made it at 12:15, thirty minutes faster.  It was a fun, fast ride.  If I was leading and could see that the roads were getting twisty, I would signal for Sam to go ahead on his motorcycle and I would do my best to keep up.  A few times he would have to slow down considerable or even stop to wait for me to catch up, but usually I would be close enough that a top speed blast on the straights would get me back up to him.  We settled in the chosen restaurant and ordered food, waiting on the others.  We took our time, but they never came. 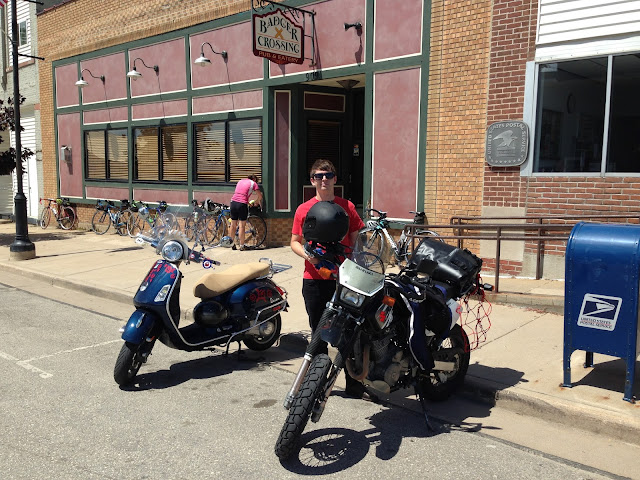 
So we rode back to Sparta, then took another 30 mile loop north to see some more interesting roads. 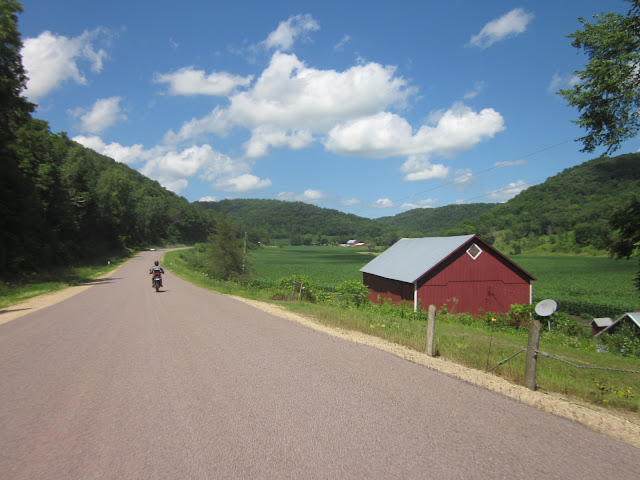 Back on the county roads of Wisconsin 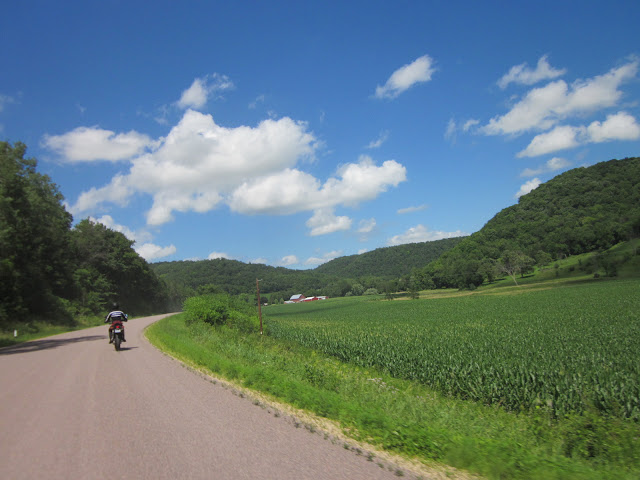 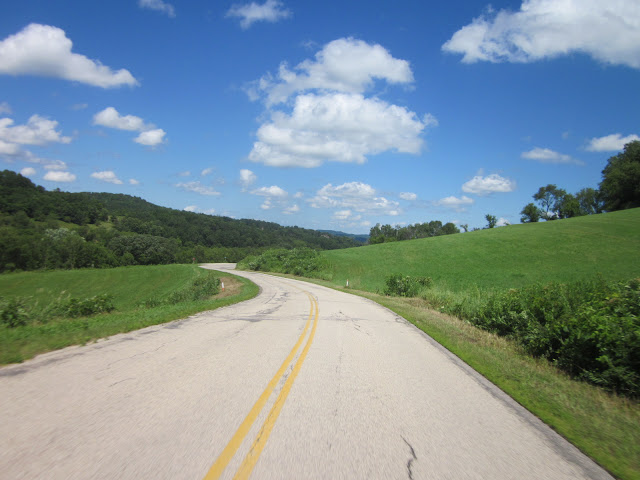 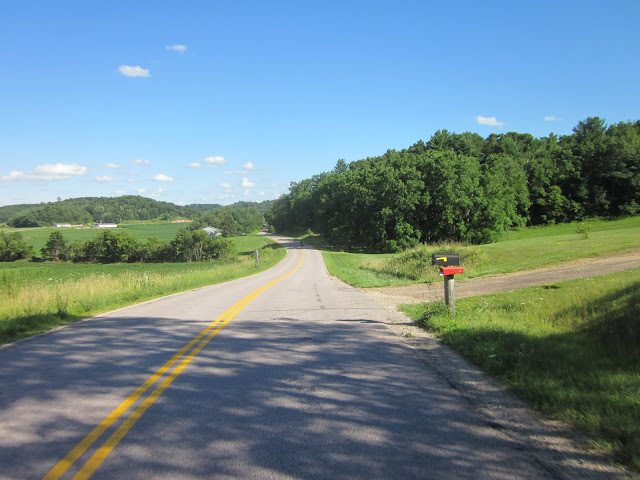 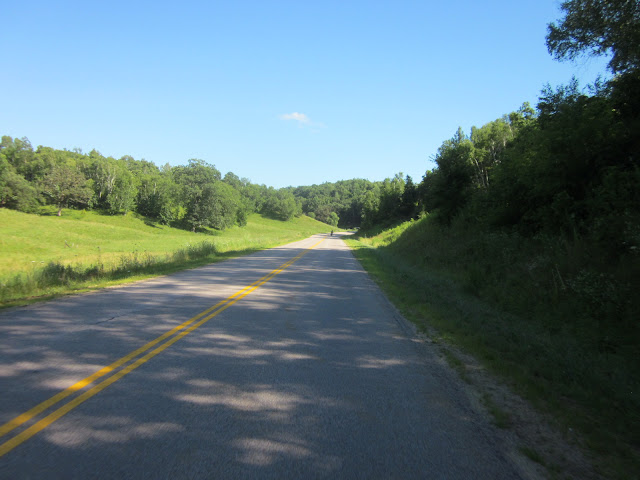 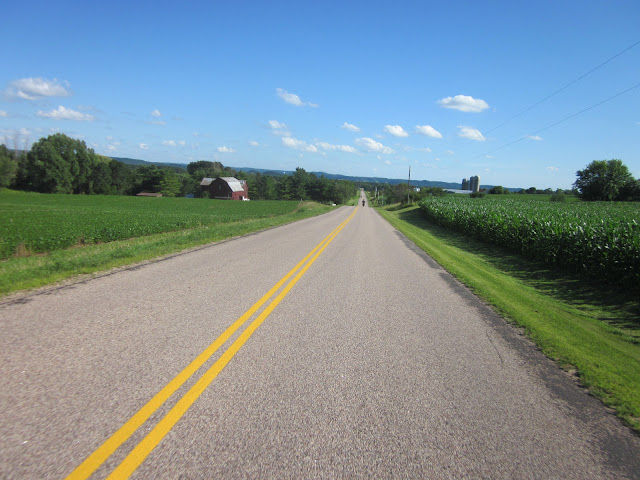 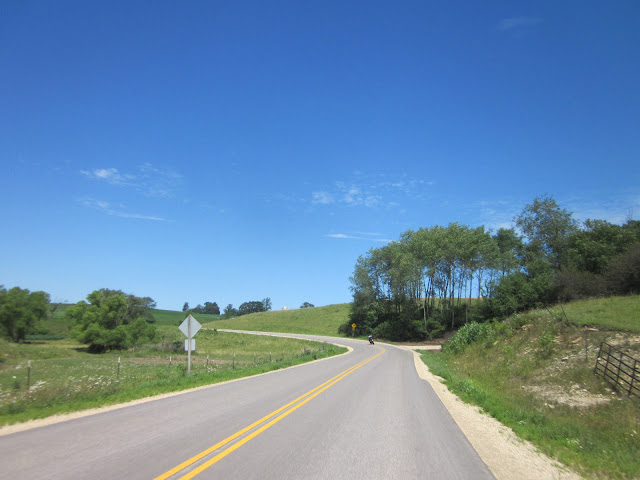 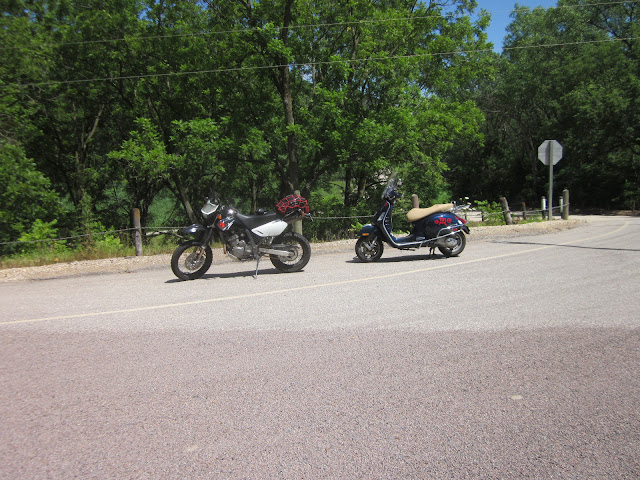 Our trusty steeds.  Mine was more comfortable, Sam's faster. 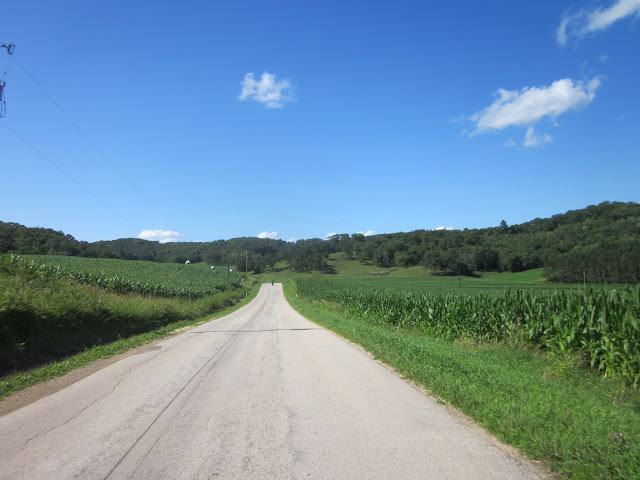 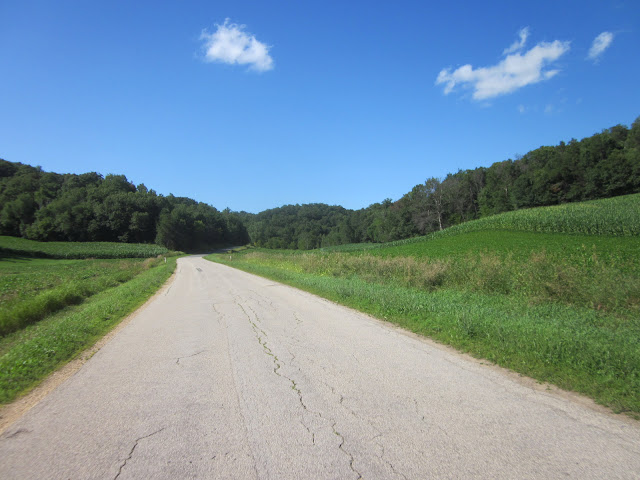 When we returned to the hotel, the others had arrived and told us that they were so far behind schedule that they decided to eat at an earlier planned stop.

We then gathered for dinner at a local pizza restaurant and turned in for the night. 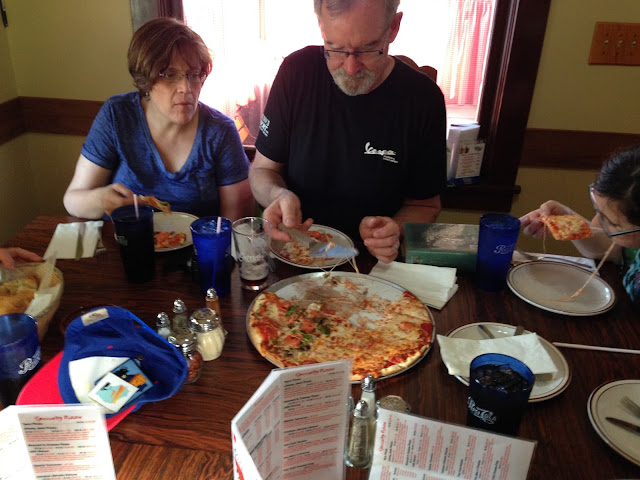 The Langholff's at the pizza restaurant 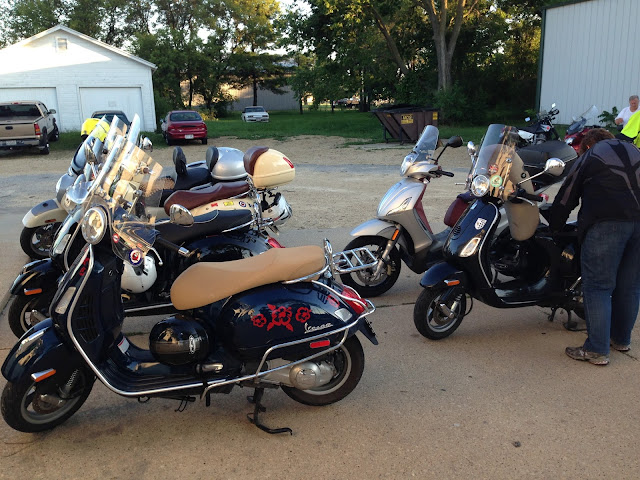 Scooters at the restaurant