The numbers kept climbing.  I was standing on the scale in the foyer at Publix and the needle wouldn't stop.  It wouldn't stop because I jumped off when it got to the high 220's.  I believe it was 227, but I have tried to forget.

Shortly after that, I was walking on King Street, returning from lunch at my favorite deli, Whiteway Delicatessen.  I came by a small storefront that had suddenly appeared.  I peeked inside and found a beautiful, hand crafted restaurant called Southern Roots.  Once inside I looked at the menu, two simple chalk boards with foods different than you usually find in Jacksonville, Florida.

It is run by a lovely young couple, JP and Mariah.  They both turned 30 since the beginning of the year and Mariah is now expecting their first child.  They are both friendly and a pleasure to talk to while eating alone.  They have hired three other young helpers who are also a pleasure to be around.  The patrons are both young and old with many of the same faces showing up regularly.

Everything on the menu is organic and mostly vegan.  No hormones or anything unhealthy. The special toppings of everything from nuts to avocado and tofu can be placed on greens, bread or rice.  After eating there for a few times, I settled on the "savory" on greens.  The "savory" changes daily, but there are only about ten different recipes that rotate on a "whatever is fresh that day" schedule.  It is a fresh salad with tasty toppings. It is always good and plenty to keep me from being hungry all afternoon.  Lately I have been getting an iced coffee to go with it.  That keeps me awake and fresh so I can get my work done.  That, plus it is also delicious.

I eat there every weekday that they are open unless I have to eat elsewhere.

This morning I stood on the scale in the bathroom of the house that friendly clients are letting Sarah and me use between selling our old house and closing on our new house.

This morning it said 206.5 pounds.  Literally, the only thing that I have been doing differently than before is eating healthy, tasty food at Southern Roots. And only for lunch four days a week.  It has been a great relationship that I intend to stay with for a long while. 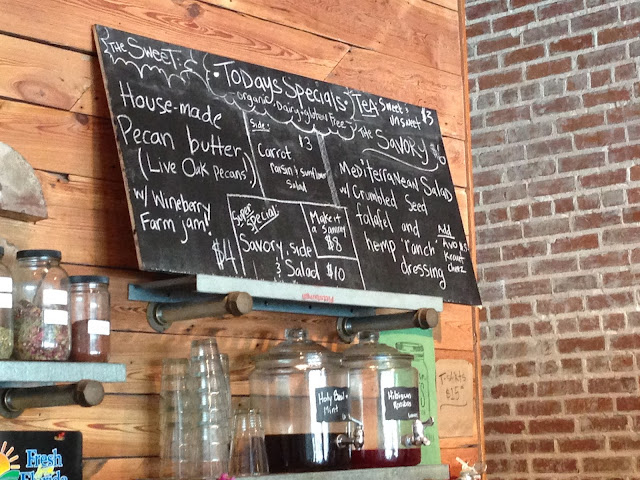 The daily special chalk board. 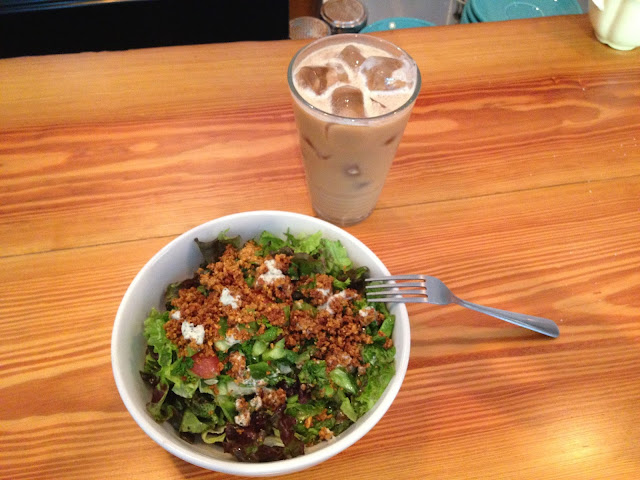 Yesterday's lunch as described on the savory side of the board.  It was delicious.

Posted by Bill Leuthold at 8:54 AM