I have been trying to get the Lambretta working properly since Boris and Eric got it running after over thirty years of sitting.  They replaced all the gaskets and seals along with clutch plates, etc.

But the first ride showed the transmission to be very balky, not wanting to get into first gear or neutral at times.  I can pull on it with both hands and it is not willing to move.

So I had Boris replace the cables that actuate the gears and clutch, along with the front brake cable.  I was hoping that this would make a big difference.  But it didn't, improving things only slightly.  Then Boris made some adjustments that helped a little more and gave me some advice, mostly to only shift when moving.  So I now get downshifted into first before coming to a stop.

I have ridden it maybe twenty miles since and am getting used to it.  It is still like an old VW Beetle compared to Rocket's sporty Cadillac presence.  But it has some charm, so I will keep using it in hopes that it loosens up over the miles.

Its performance is very similar to the Malaguti Ciak 50, but the Ciak is much easier to ride.  The fastest I have had the Lammy is maybe 45 mph, the same as the Ciak..  It does that as easily in third gear as fourth as there is a huge drop in engine speed when shifting into high gear.  I am quite certain that fourth is only faster going downhill with a tailwind, but much more relaxed. 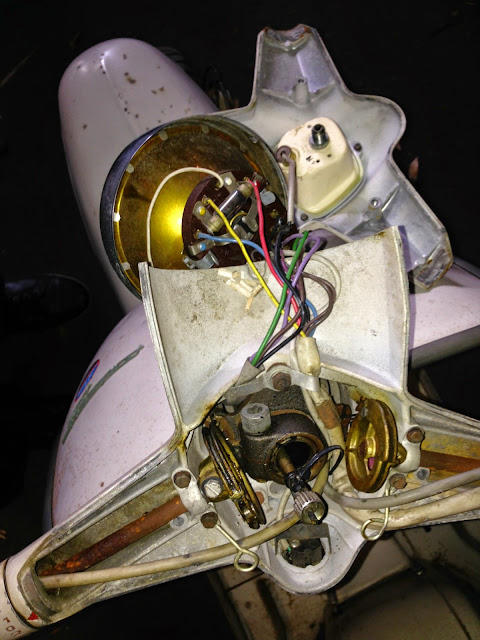 Headset opened up to connect cables to the levers

Posted by Bill Leuthold at 7:57 AM