She is Trying to Kill Me

My recently purchased 2007 Vespa GT, Vanessa, has been a problem lately.

I tried very hard to get her ready for last week's Iron Butt ride with Bill Dog, but the Monday before the ride, after getting a new fuel filter and fuel valve, while running flawlessly on a test ride, she blew the coolant hose off the carburetor, causing the engine to get very hot.  I, luckily, saw the high temperature reading and immediately stopped.  After a $110.00 tow home she was parked for the remainder of the week. 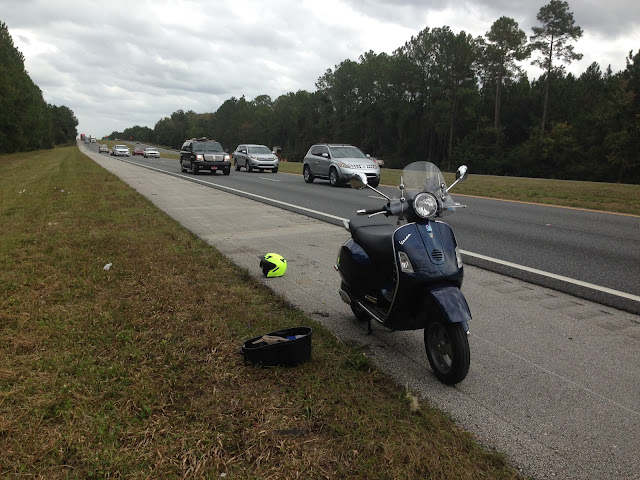 On the side of Interstate 10 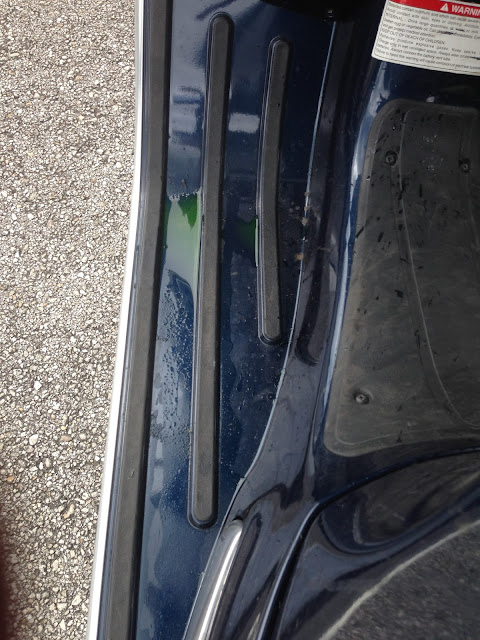 Coolant on the floor board. 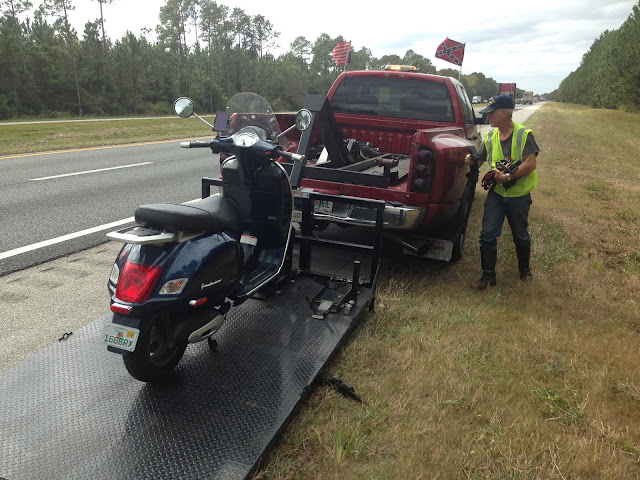 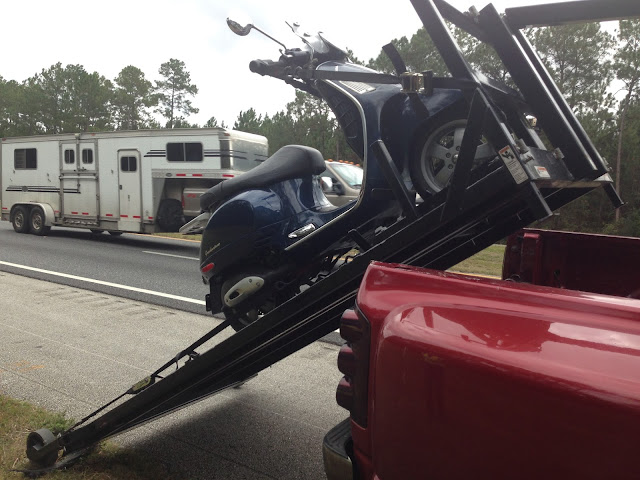 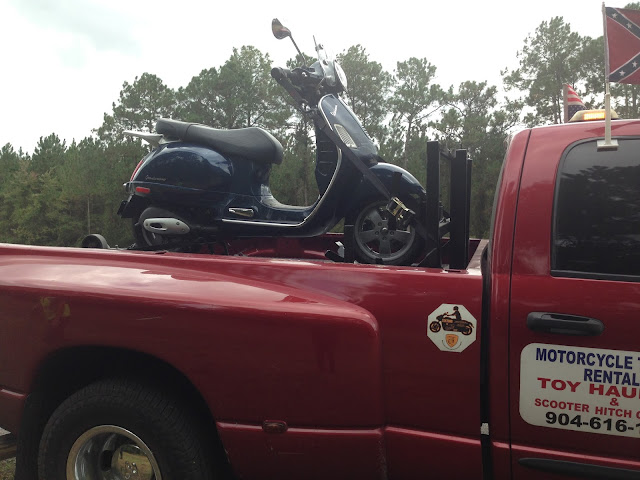 Vanessa on the tow truck.  She appears to like it there.

So I borrowed a GTS from Shane Evans for Bill to ride in the Iron Butt.  It was a very gracious and generous offer that not many would make. 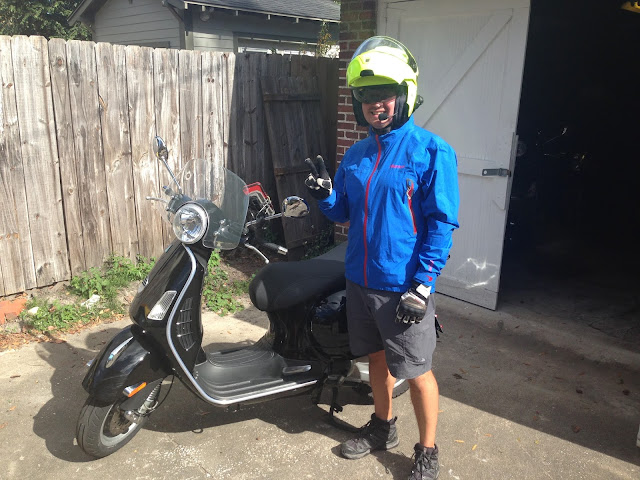 Shane and his GTS.

It had a Sava front tire that I felt was not appropriate so I changed it for the new Michelin Power Pure that I had recently put on Vanessa.  So Vanessa was left with this tire that carries a poor reputation around here.

Then I had Boris, my friend and mechanic, come to pick her up for the repairs.  He re-attached the hose, gave her a 10 mile test ride and declared her to be fit again.

So, yesterday, I decided to ride her on a nice comfortable country ride to Kingsland, Georgia for the funeral of Gary Readdick, a fine scooter friend I wrote about earlier.

To get to the good part, I headed out I-10 to Chaffee Road.  As I got over 60 mph the scooter felt very unstable.  So unstable that I turned off at the first possible exit to ride home to exchange her for a road worthy scooter.  I got caught up in a dead end neighborhood, but found my way to US90 and aimed for home.  In looking down, again, I noticed the temperature gauge was high.  Pulled over to see a little steam and some coolant on the floor board.

Called Boris.  But while waiting I put in a pint of coolant I had brought along and restarted the engine.  Coolant was coming out of the nipple on the head that supplies coolant to the carburetor.  The other end had come loose!  I reattached the end and called Boris and Neil, the driver who was coming and told them to hold off, as I thought I could ride to the nearest auto parts store to get more coolant and get home.  I rode about a mile, but stopped because the temperature rose too high again.  My assumption is that it lost much more than the pint I could put in.

Neil arrived and as I was moving the scooter to the ramp, I noticed it was difficult to push,  He looked down and said that she had a flat tire.  WHAT IS NEXT WITH THIS MACHINE! 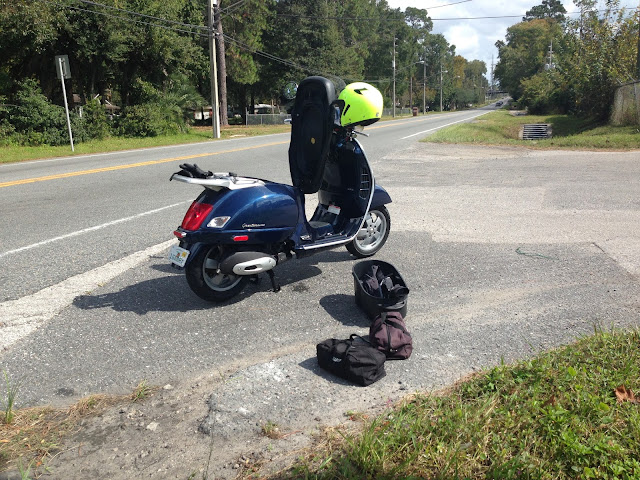 Side of the road again. 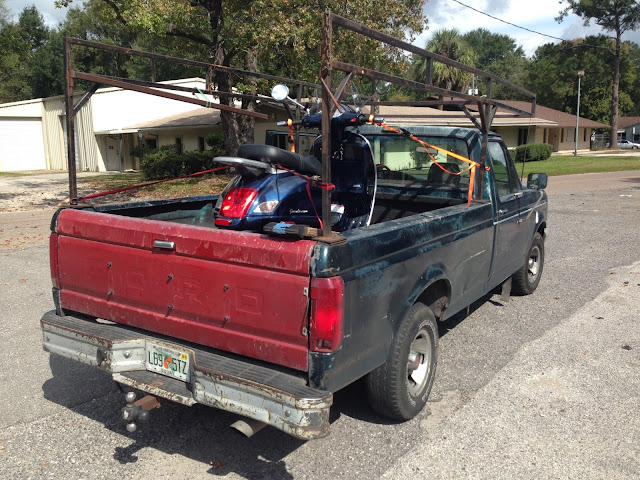 Loaded up on Boris' work truck.

I have decided that she not only doesn't like me, SHE HATES ME!  So much that she is now trying to kill me.  What I thought was the bad Sava front tire was actually a brand new Michelin Power Pure going flat on the highway.  She is possessed by the devil.  I am going to ask a preacher friend of mine if he will perform an exorcism.
Posted by Bill Leuthold at 8:49 AM