Yesterday was Iron Butt Day.  Bill Dog came from england with a mission to complete his seventh Iron Butt ride.  This one is known as a Saddle Sore 1000, is it is for a rider to cover at least 1000 miles in less than 24 hours.  We did it in 19:30.

The first stop was the local Sunoco station, where the door was locked, but the clerk was there and signed my start of ride paperwork.  We fueled both scooters to get a time receipt and headed off into a black, dark highway. 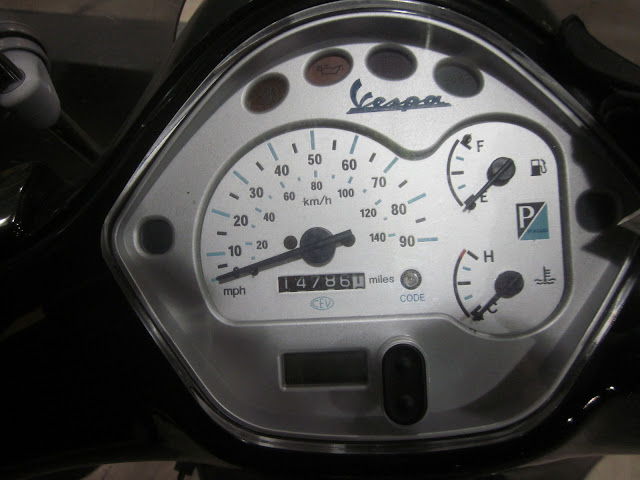 Starting mileage in the garage at 4:00 AM 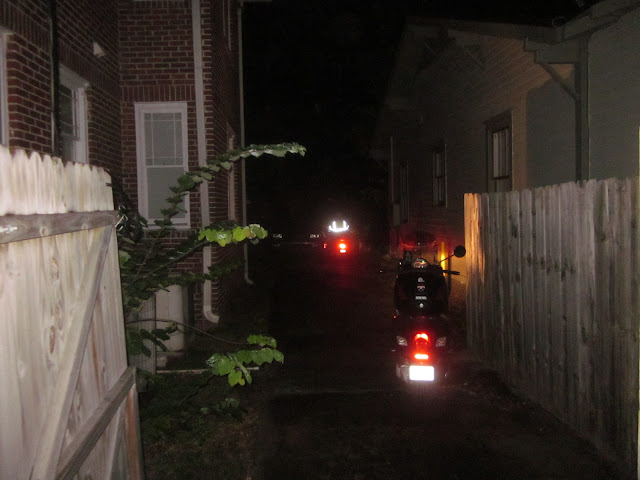 Into the black night 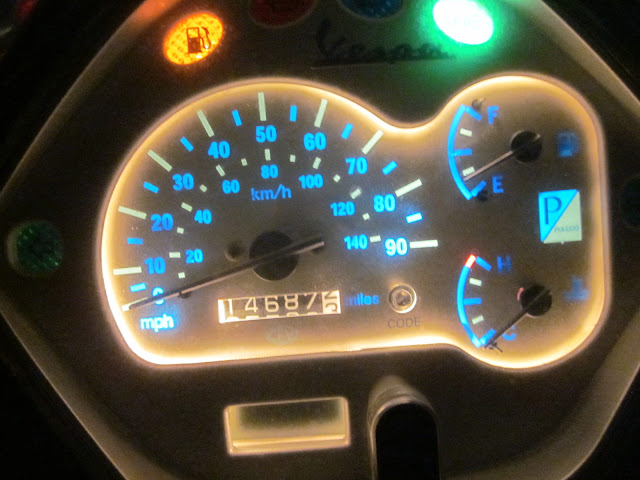 The first leg was on I-10 to just east of Tallahassee.  I had hoped to be able to make at least 120 miles per tank but Bill's GTS went to empty at 100, so we stopped short, adding several stops during the day.  The ride went southeast on 19 to Perry, then 27 through Mayo, Branford, Fort White and High Springs to I-75.  I-75 is a typical highway, but it has some hills and views to make it interesting.  This day it also had a tailwind that kept me up with the mid speed cars and passing all of the trucks  We made good time to make our meeting with Bill's sister Liz at a 7-11 in Sarasota.  She was delightful, bringing us food and drink for the remainder of the ride. 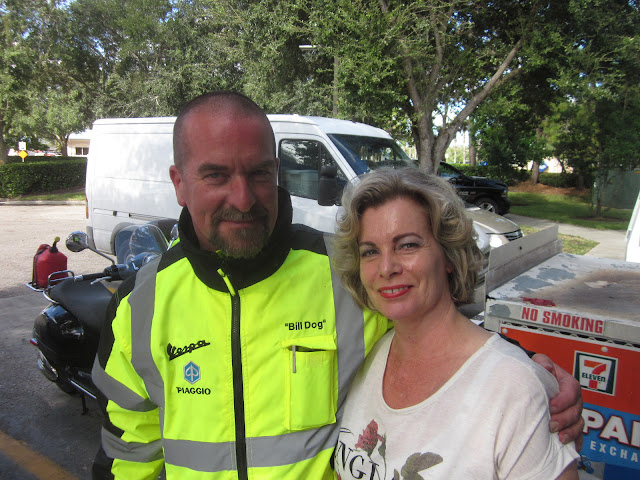 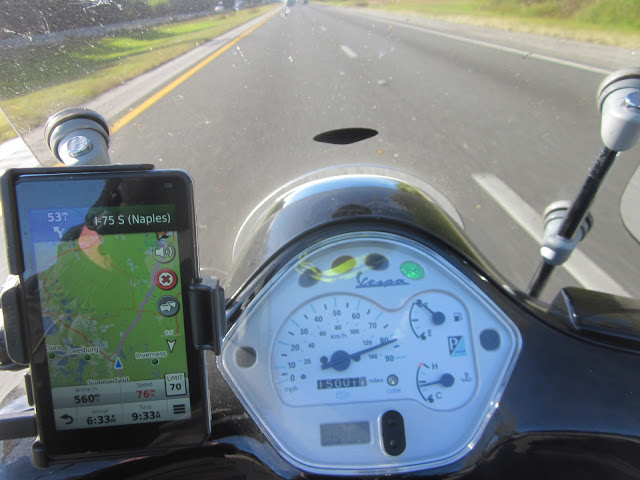 
The ride continued south to where I-75 turns and becomes Alligator Alley across the Everglades.  I wasn't content with that and had us going south to US41, a two lane road that runs straight as an arrow across the south part of the Everglades.  It was sparsely populated with cars so we could make good time, except for the 20 mph headwind that kept Razzo's speed down. 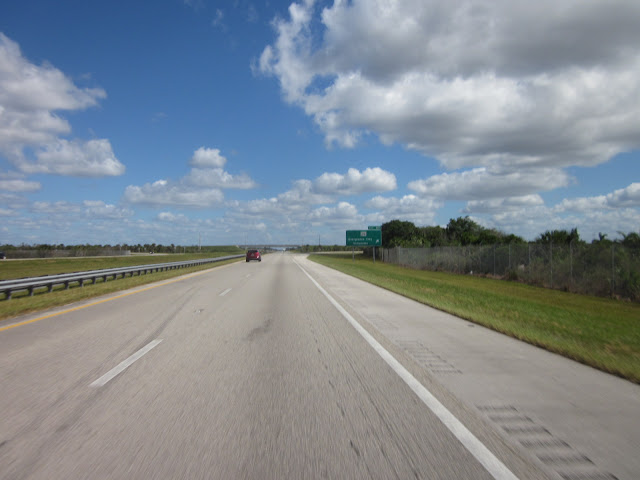 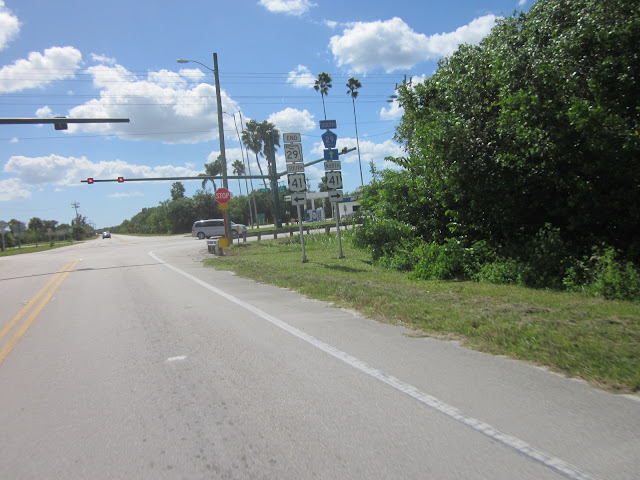 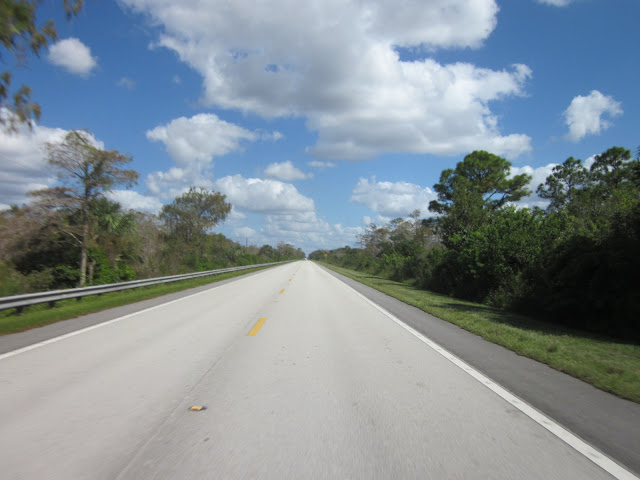 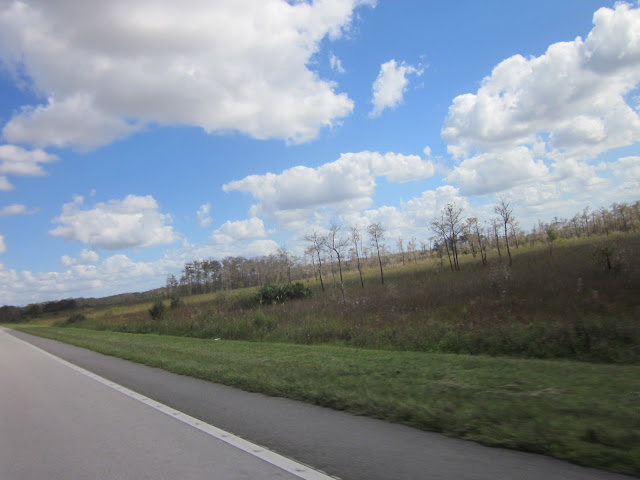 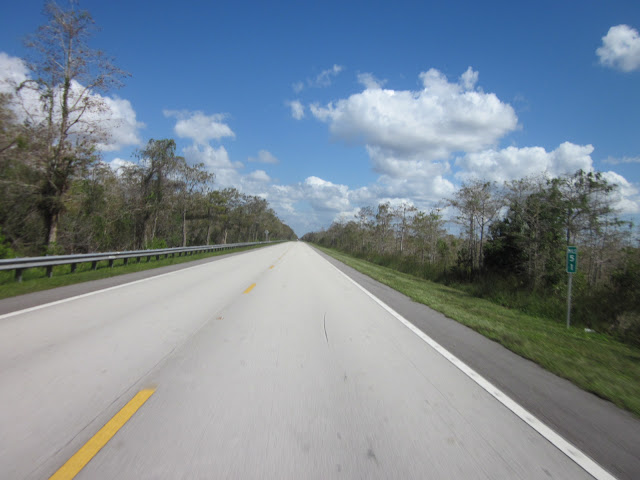 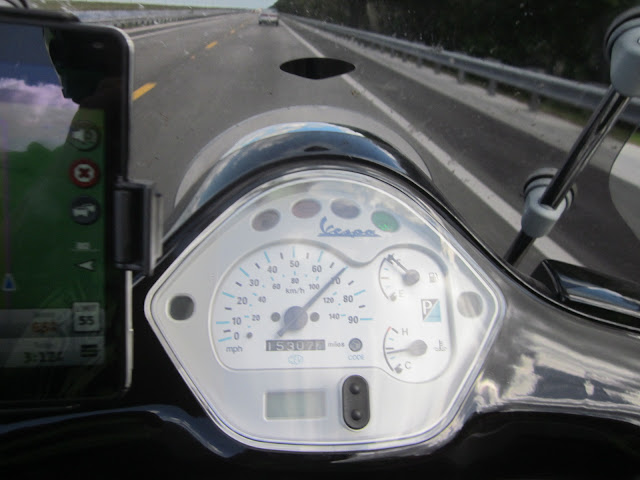 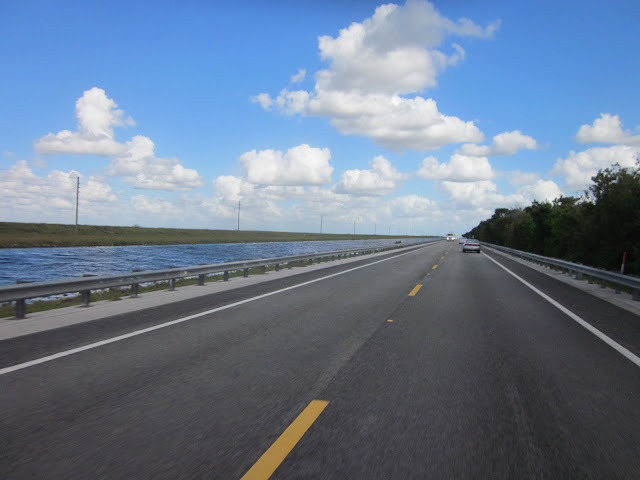 Big man-made canals along the road.  Can't be good for a River of Marsh.

To avoid Miami, we started north on a road my GPS called "Road", but google calls 997.  It was in the middle of major everglades repair, so it had sticks in the middle of the pavement for its entire 14 mile length.  Traffic moved, but at 45 mph, so the slowest road on the entire ride.  But there were no stops and it turned out well.  I then took the Ronald Reagan Turnpike and Florida Turnpike to pick up I-95 near Jupiter (Not Uranus)  It flowed well, but we had several stops as the GTS began needing fuel ever 60 to 80 miles.  Razzo would rest as Bill refueled the GTS on a couple of the stops. 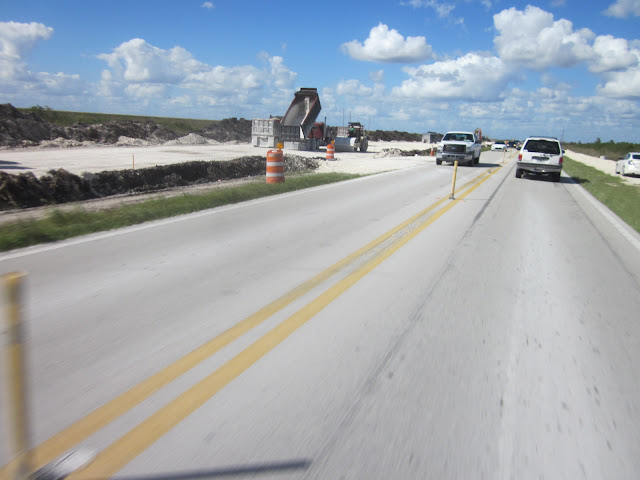 We made it to Titusville at exactly 8:00, as planned, to meet with Bob (Flordian on MV) who had prepared a dinner of ravioli, salad and bread.  I was famished after getting by on nut bars and gatorade most of the day.  It was perfect.  There was a little Raccoon friend who wanted to join us but we kept it at bay. 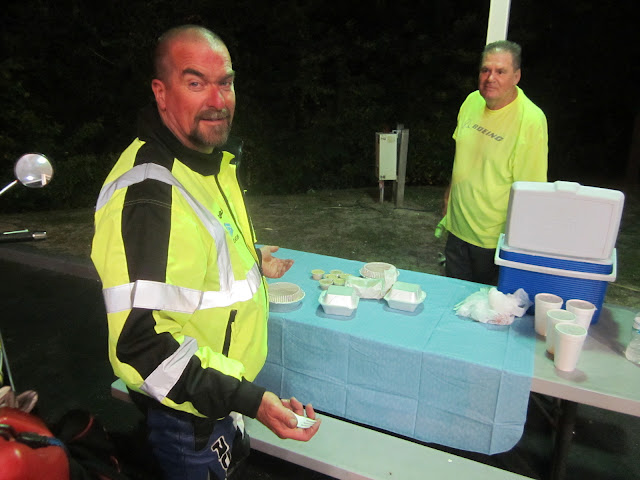 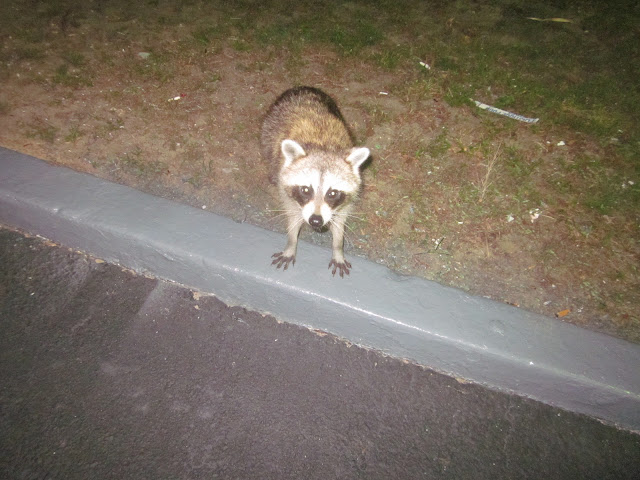 
We arrived in Jacksonville at 11:30, stopping at the closest Shell station for beer.  It was a quiet, but a beer for me and a coffee for Bill was a well deserved celebration. 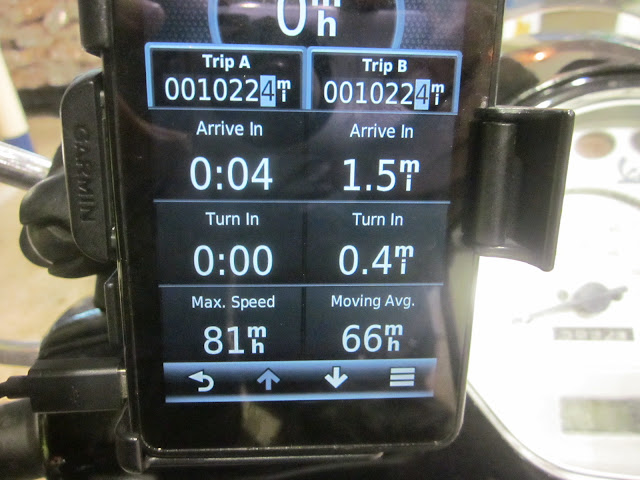 Garmin said 1022 at the Shell station. 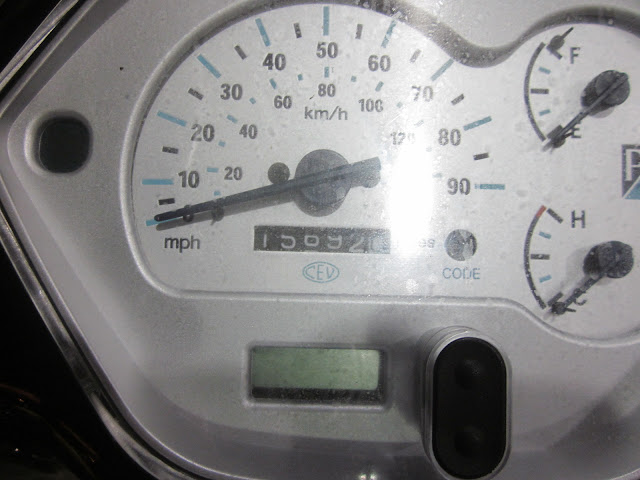 I arrived home feeling fit and ready for another.  Not tomorrow, but I could do it again.  But I probably won't.  I enjoyed every bit of the daylight riding.  The night, not so much.  I do love riding and shorter trips are more fun for me.  I am glad I did it, but now having done two, that may be enough of those for me.

One thing that surprised me is that it turned out to be smaller than you would believe.  If a scooter can cover everything from Jacksonville to Tallahassee, then Tampa, Sarasota, the Everglades, Metro Miami and the entire east coast in one day on scooters, it must be smaller than you think too.
Posted by Bill Leuthold at 11:26 AM