With the Saddle Sore 1000 on the horizon. I had to get the two Vespa GT's ready for the challenge.  The chosen two are Vanessa and Razzo.

As I have posted here, Vanessa has been through a lot this year.  Traumatic accident and change of ownership, but she is the freshest of the three in mileage and age.  Razzo is perfection is a scooter and has proven itself with rides this year to Virginia, North Carolina and three round trips to Apalachicola, along with many short rides.  7500 miles in seven months.

They need to begin the run with new tires, belt and oil.  I removed the wheels from both last week and took them to my tire mechanic, Mike, last week.  They have been mounted, balanced and tested, working very well. 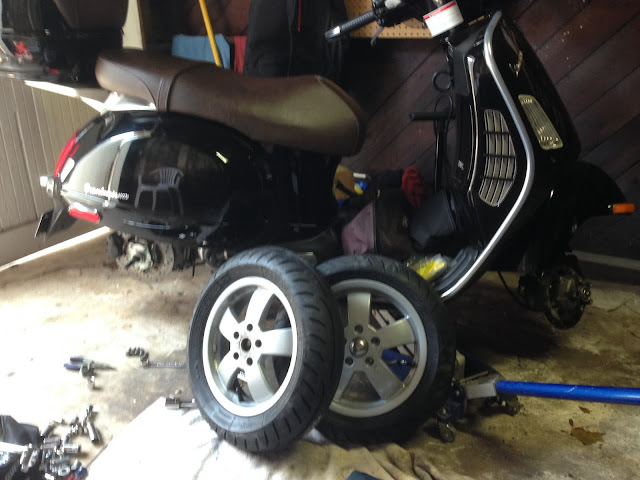 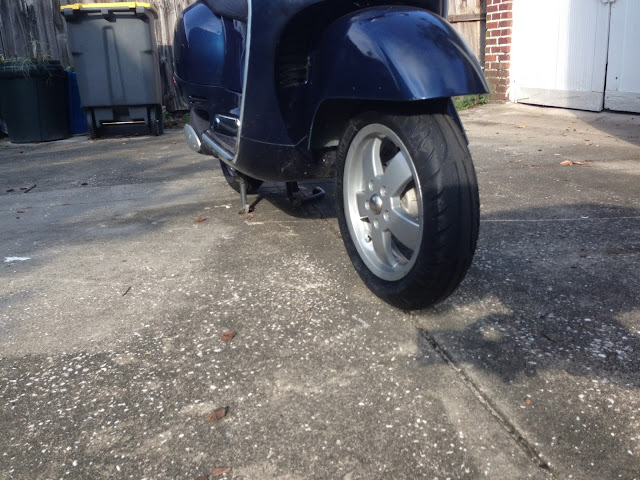 Friday night I came home and changed the belt on Vanessa.  The original rollers looked fine so I cleaned them and left them on until the next change.  Same with the variator O ring and the three U shaped glides.  The belt was probably original, 5000 miles and 9 years old.  Saturday morning I did the same with Razzo, but put 12g Dr. Pulley rollers in to try the heavier version for fun.  They worked well as in one quick run to the warehouse, I hit an indicated 85 mph easily.  It felt fine accelerating as well. 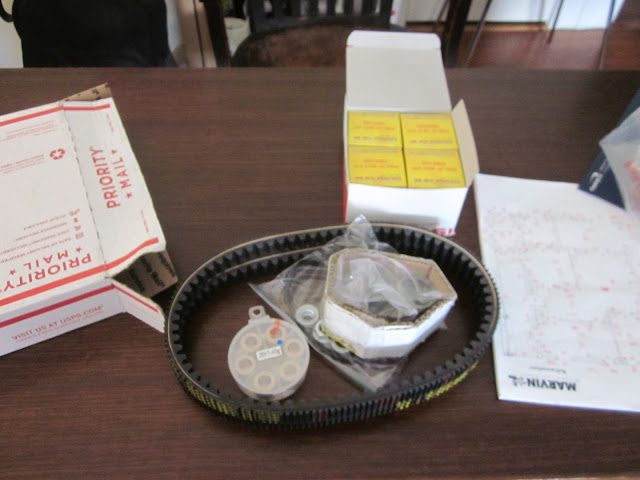 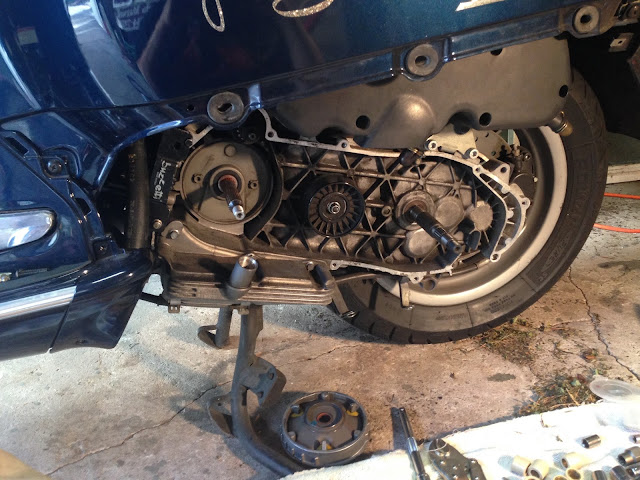 Vanessa still bothers me a little as she stumbles occasionally and is currently starting slower than usual.  She also has a slight shake from the rear, even with the new tire.  It smooths out fine at speed but remains a puzzle.  So I thought it best to do a shakedown ride to test speed and fuel mileage.  I chose I-10 heading west and rode 55 miles to 441, just north of Lake City.  I turned around and headed home until the fuel light came on approaching Macclenny.  I stopped in Baldwin for fuel and was surprised that it went through 2.24 gallons in just 121 miles.  That will change strategy on the Iron Butt ride.  On reason for the ride was to determine the speed potential after the belt change.  I went out without a GPS, relying only on the recently replaced speedometer.  It was reading 75 to 76 mph for most of the running alone on level ground.  It reached a high of around 82.  The problem with this is that my other Vespas have very optimistic speedometers, reading 75 usually means 67 to 68 on the GPS.  So I went home and installed a RAM mount with the GPS.  Luckily, Vanessa has the most accurate speedometer of them all.  When reading 75 to 76, it was actually traveling at 73 to 74 mph.  It maxed out at 79 on this short ride so speed will not be an issue. 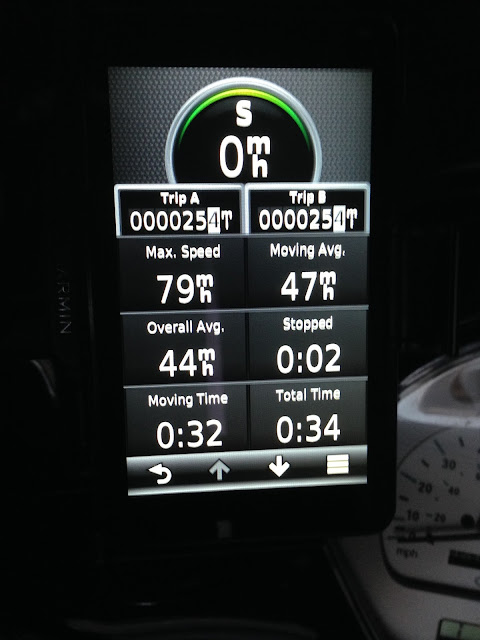 So I am left wondering if I should do more to get it ready.  The broken machine has already cost me at least $4500. and still has issues.  I am thinking it may need the valves adjusted, new spark plug and a thorough cleaning of the carburetor.  Or will it be ok?

Not worried at all about Razzo.

I am quite certain that Rocket would either throw a drive pulley or have carburetion issues on the ride, so it is out.  The only option that would definitely work, would be to put BillDog on Razzo while I ride the Honda.

I will work it out in the next week. 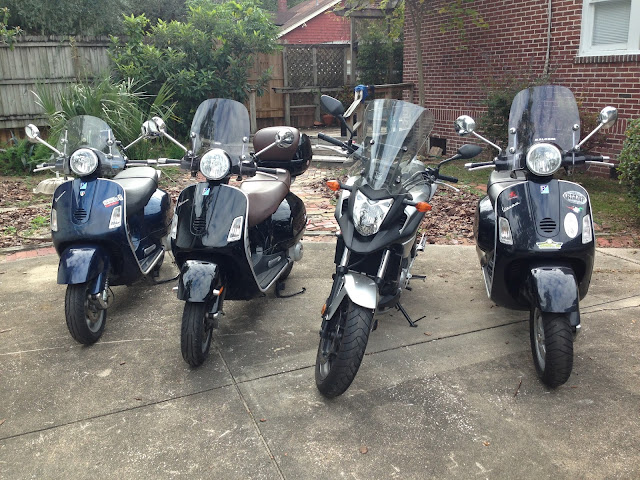 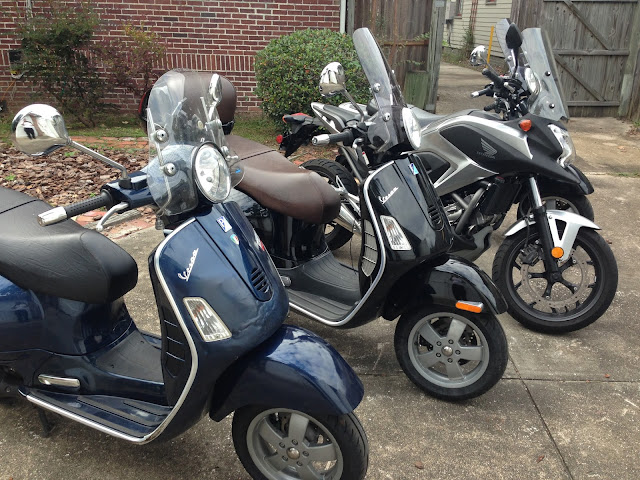 Vanessa and Razzo, with the Honda 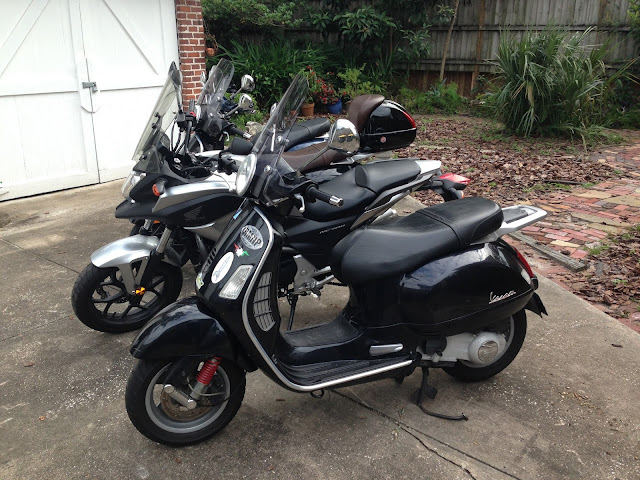