After the fine day Saturday, I was concerned that Sunday might not be as good.  And the weather report was giving signs of possible bad weather.  Man, was I and the weather forecasters wrong.  Sunday was a great day for the club and riders.

I left home early, watching the sun come up on a top speed run down from the span of the Buckman Bridge.  Razzo hit 79 on the GPS, a little slower than I was hoping for, but I was not in a draft on that calm morning.  The river was like glass.

We all gathered at the Hardees on State Road 13.  There were at least 45 scooters and bikes.  It was the best turnout ever, probably due to holding it in balmy March instead of cold, rainy January.

Russ gathered all for instructions and thoughts.  He took the vintage group out early for a head start.  We gave them ten minutes...well...maybe eight and the remainder of us, in four groups, headed after them.

The return over the Buckman Bridge started the adventure.  I led out group at around 70 mph, and made it to the west bank of the river safely.

US 17 isn't so nice, so my route had us getting off on Ortega Boulevard, past the multi million dollar riverfront houses where many of Jacksonville's leaders call home.  Many have been projects of mine over the years.

We crossed the Grand Avenue draw bridge over the Cedar River, then into Avondale for the curves and a visit through the historic neighborhoods.  I was pleased that many of the riders commented that they enjoyed seeing this part of the city.

We went through Five Points, then over the Fuller Warren Bridge (I-95 where it crosses the river).  I stopped us at Friendship Fountain two bridges early and found the vintage crowd still there.  Everyone else came shortly after that, so we hung out for a few minutes, some visiting the fountain and others just gathering.

Because we missed two bridges, we left early to cross those, the Acosta and Main Street Bridge (official name, Alsop Bridge) before the hairiest part of the trip, crossing three lanes of a busy I-95 in a quarter mile to get to Atlantic Boulevard..  The road work will be completed by this time next year, but if it isn't, we are going street roads through north San Marco instead.

The next stop was at a gas station before crossing the Hart Bridge. Maybe too many stops for me, but it does encourage getting to know each other.

The Hart Bridge crossing was quickly followed by the Mathews bridge, then a long expressway run to the Dames Point Bridge (officially Napoleon Bonaparte Broward Bridge) where one car tried to take out two riders.  Luckily good riding prevailed and all arrived safely.

We pulled into the Gate station for the next rest (it had been almost 20 miles since the last one)  There we waited for two who had stayed behind to help another rider who had a minor incident leaving Hardees.  Once they arrived, we rode down Heckscher Drive to the Mayport Ferry, where we were hoping that they could accommodate all of us.

It was a fine gathering on the ferry.  The car drivers all got a kick out of seeing so many of us.

The return to 7 Bridges Restaurant for lunch went well and we dined on fine food, presented Russ with a gift certificate, took a group photo and headed home.

It is a fine event.  Should one only want to ride the bridges, simply show up, join in and ride.  It takes no commitment other than a few hours.  There is no fee, no tee shirt and no pressure.  Simply fun.  That makes it special to all. 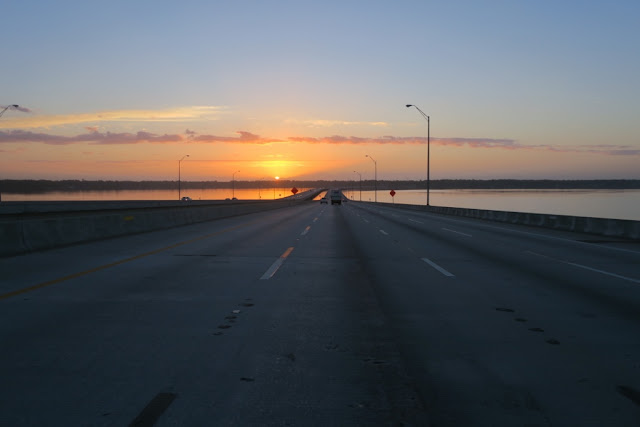 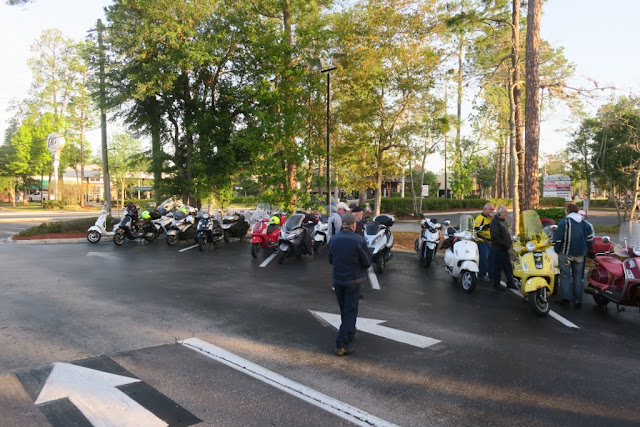 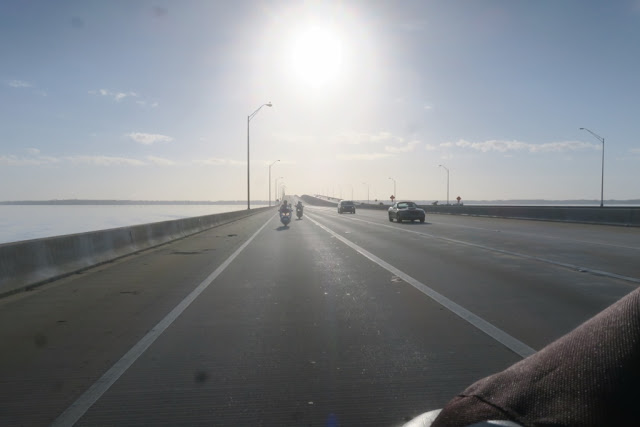 The Buckman again as the first bridge of the ride. 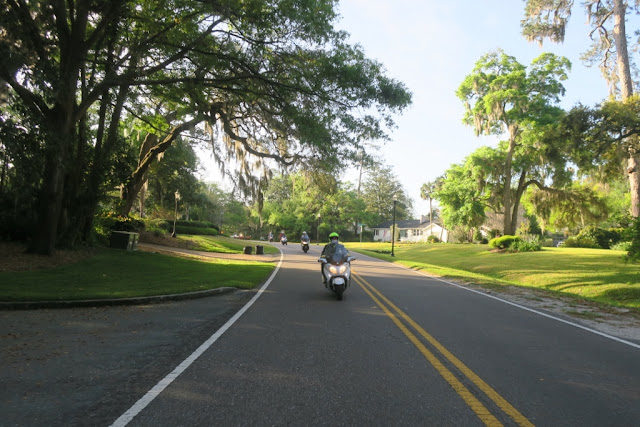 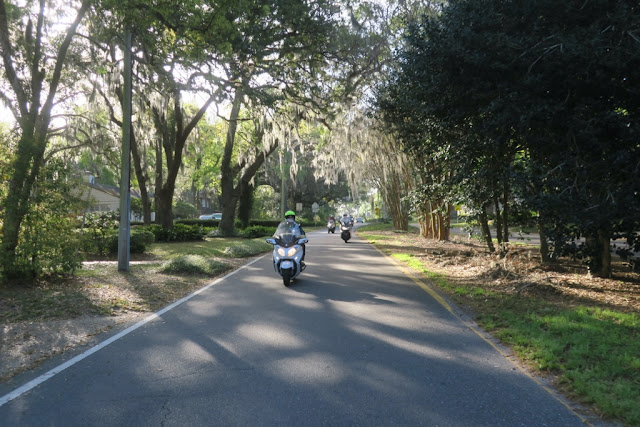 Grand Avenue near the draw bridge 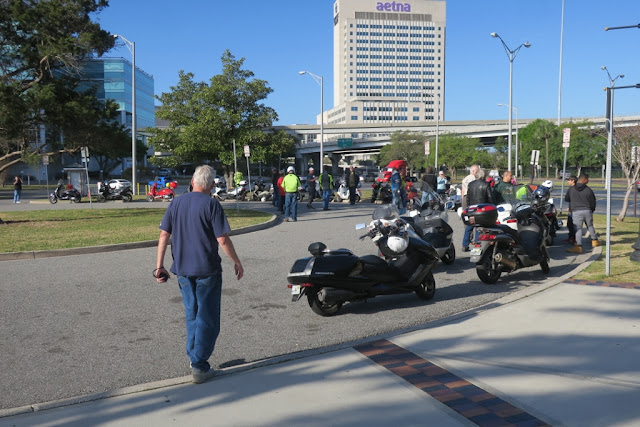 A stop at Friendship Fountain 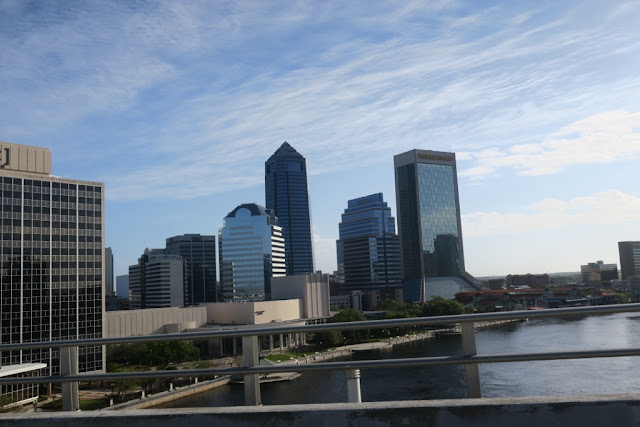 Downtown from the Acosta Bridge 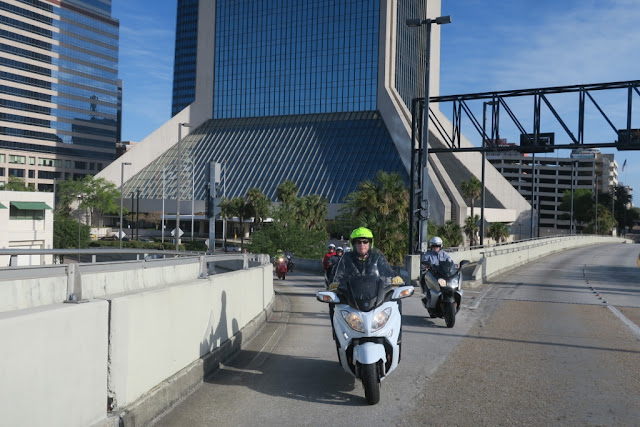 Heading onto the Main Street Bridge 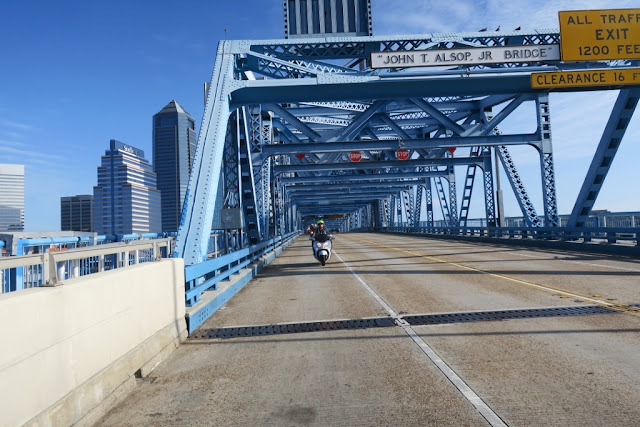 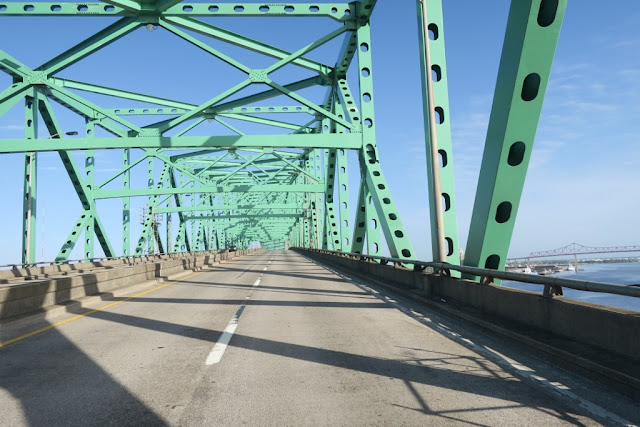 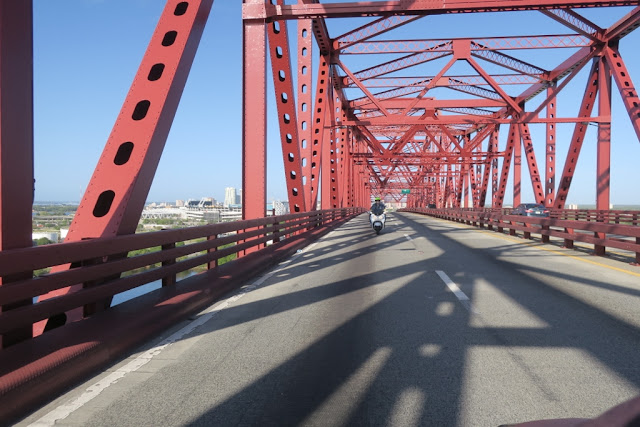 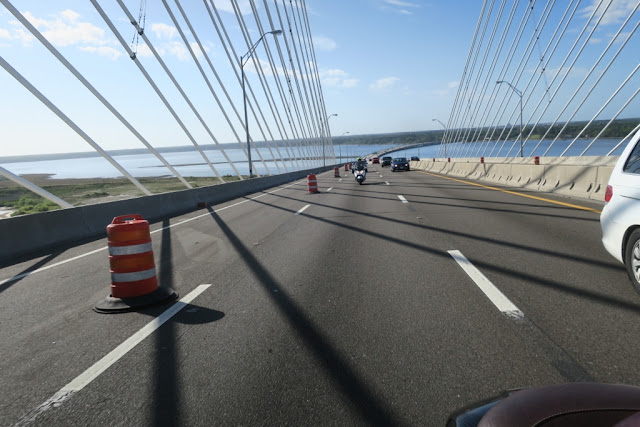 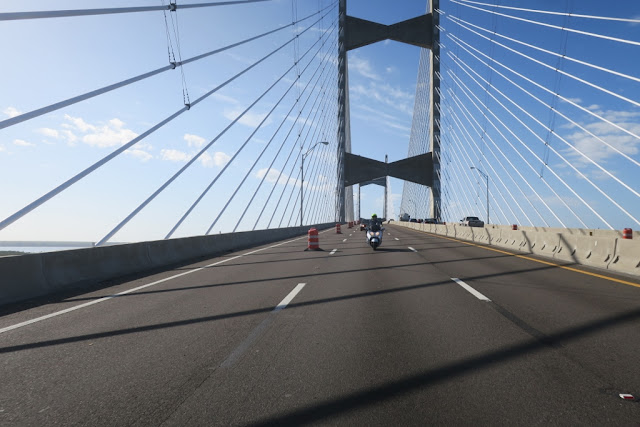 Coming down from the span 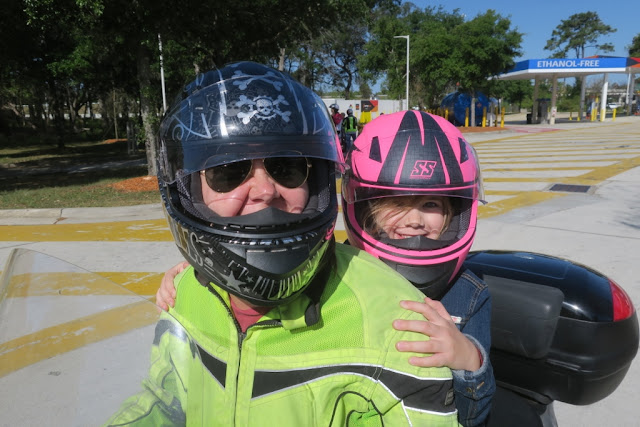 Nice to bring kids along 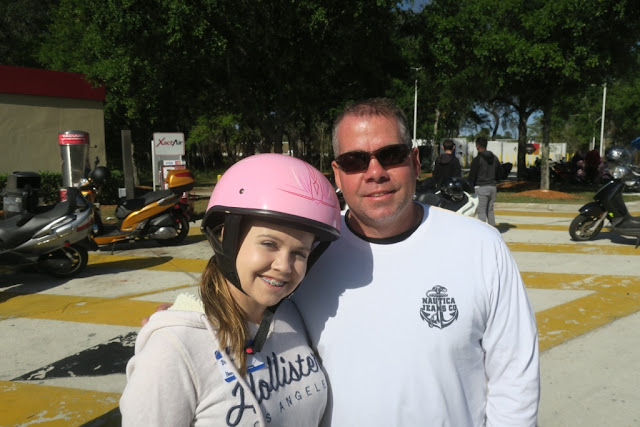 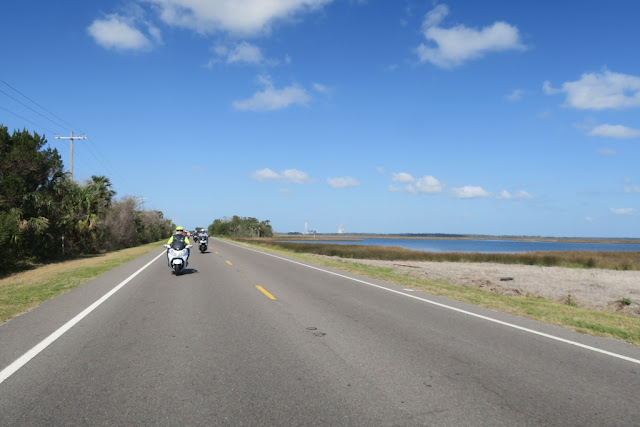 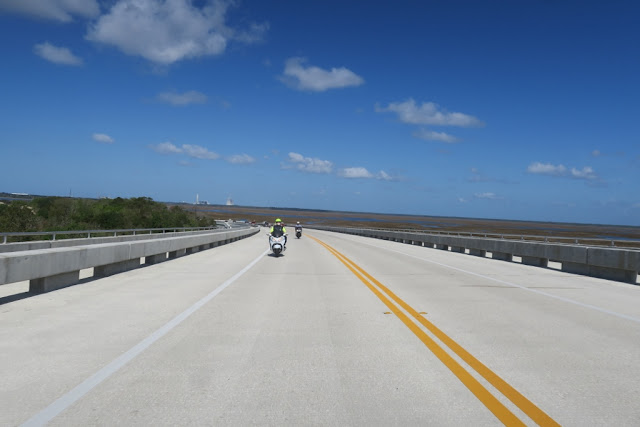 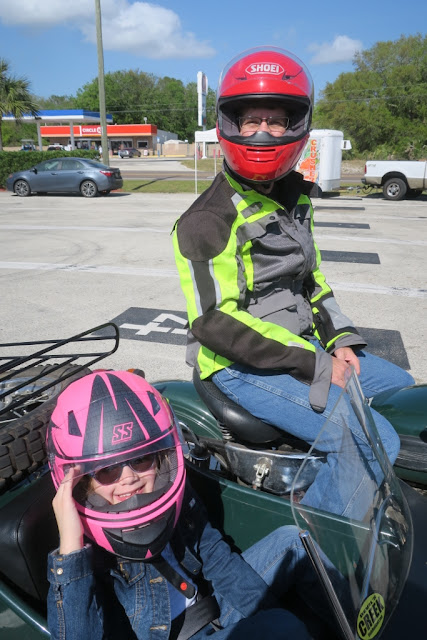 In a side car waiting for the ferry 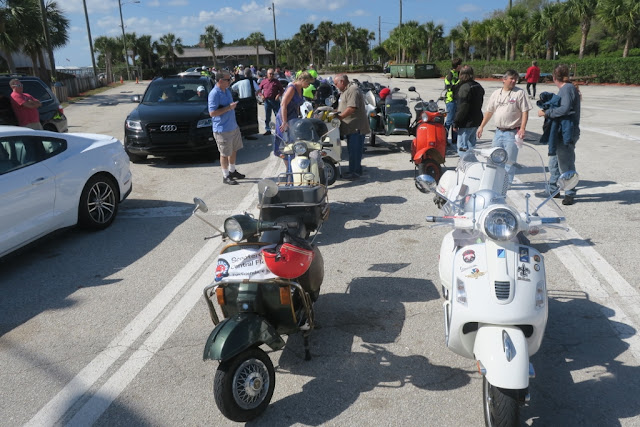 Scooters at the Ferry 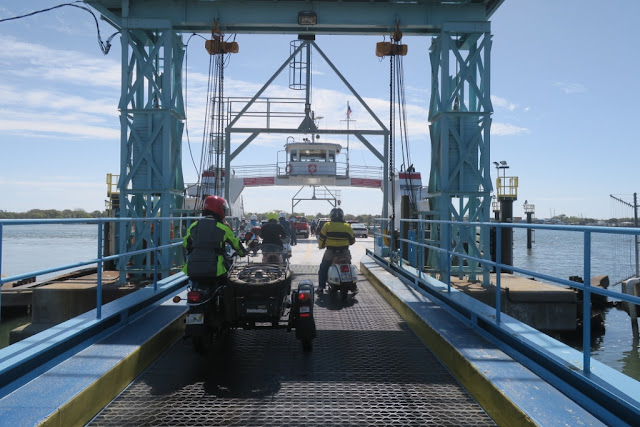 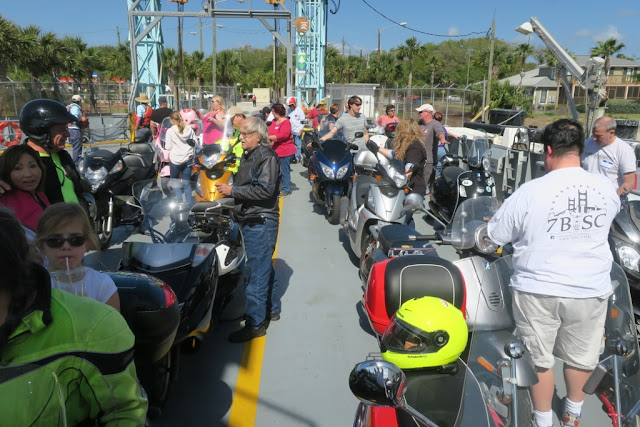 45 scooters on the Ferry 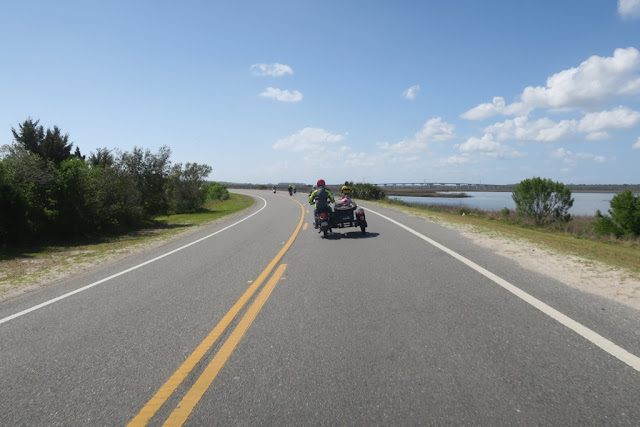 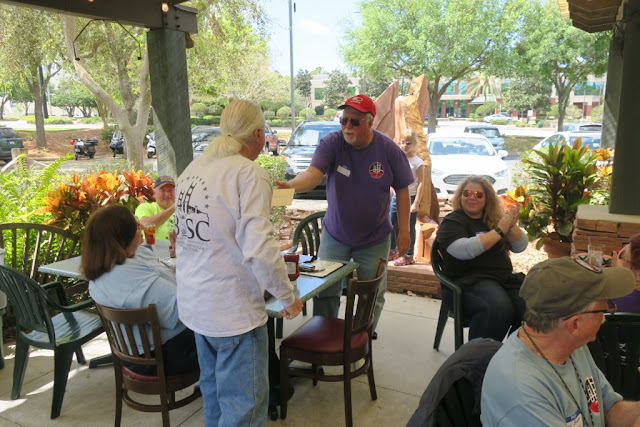 Tom giving Russ his gift card in appreciation for all he does for us. 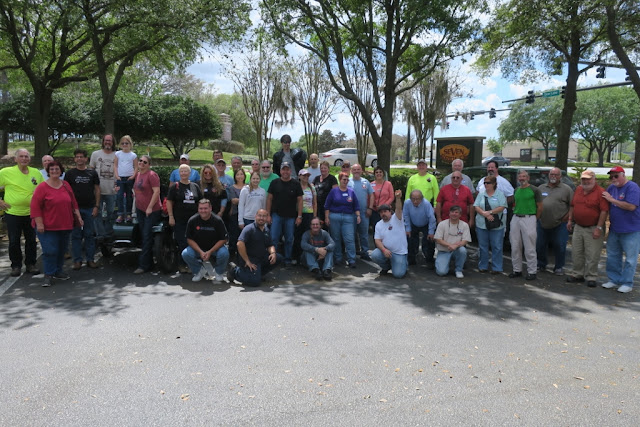 Posted by Bill Leuthold at 6:59 PM