I intend to write something every day but good weather and bad WiFi did me in.

I say good weather, but the two day ride from Jacksonville to Virginia had its bad moments.

On the first day, we ran into two kinds of trouble.  We saw rain coming and headed to a gas station about half way into Georgia.  When we arrived, we were missing several riders. Through phone calls and messages, we found out that Tom had his BV 200 stop on a bridge a few miles before we stopped.  It turns out that his belt shredded and with that the splines on the crankshaft went too.  He ended up having to have it trailered home, abandoning his ride.  The remainder of the riders, about 15 that day huddled inside the gas station where the attendant didn't mind us keeping the scooters under the cover of the pump stations.  We stayed around an hour before checking the weather and heading out into clearing skies. 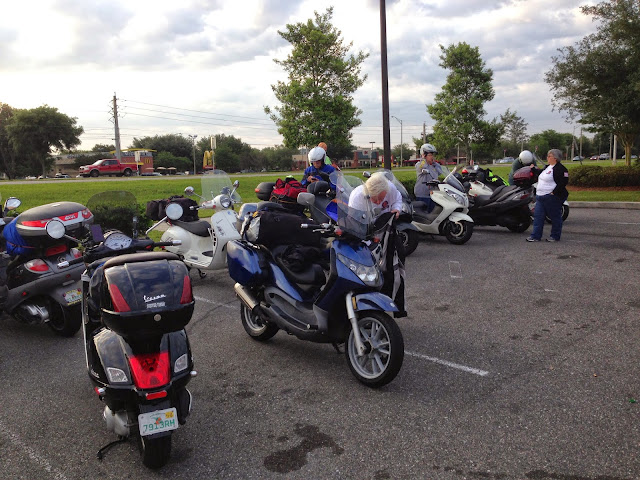 At Bojangles in Jacksonville 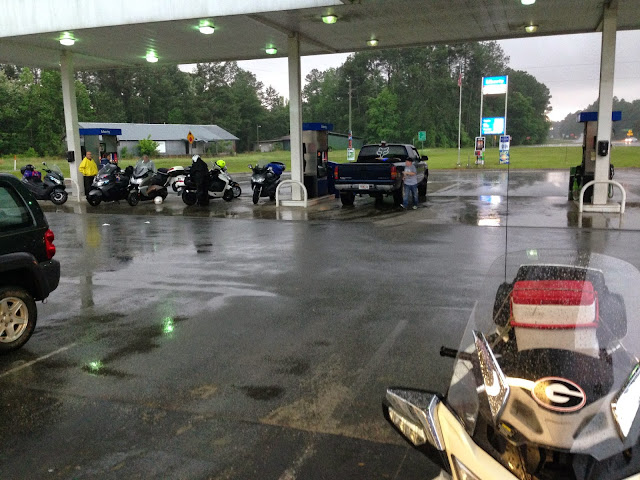 Caught in the rain in Georgia

We stayed in Newberry S.C. at the worst hotel in history, a run down Econolodge that should be shuttered.  It was disgusting, but the only place with rooms available for our large group.

Day two looked promising with reasonable weather in the forecast.  But we hit cold, rain and thick fog heading into Blowing Rock, N.C. so we stopped at a fine restaurant for lunch.  It was clearing as we headed out, but it was a long day before getting to our cabins at the Hungry Mother State Park, just north of Marion, Va. 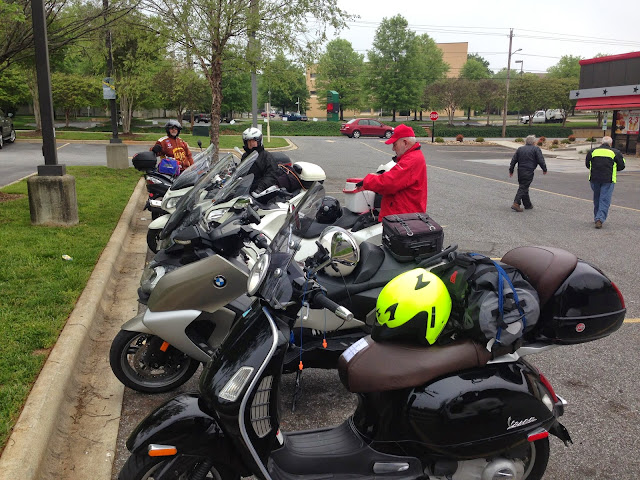 Quick stop in the cold in North Carolina. 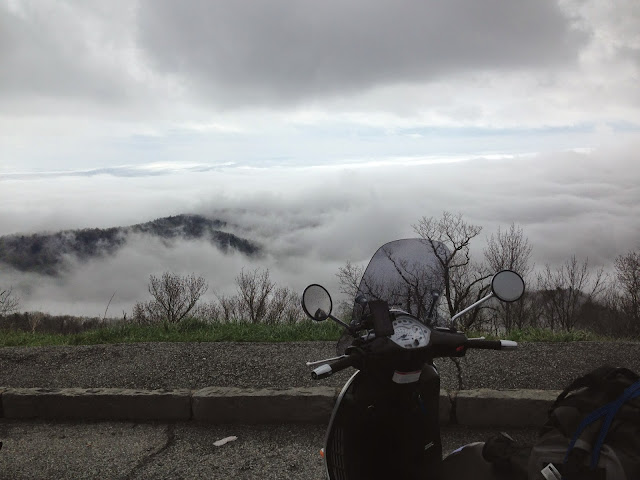 Above the fog on the Blue Ridge Parkway near Blowing Rock, NC.


Day three was clear but cold.  I had ice on the seat of Razzo in the morning.  But most of us donned our cold weather gear and headed out.  We ran a 130 mile loop, part of what they call the Claw of the Dragon up here.  Our part was the western end called the Woolly Mammoth.  We had some great roads on this route and almost everyone had a great ride. 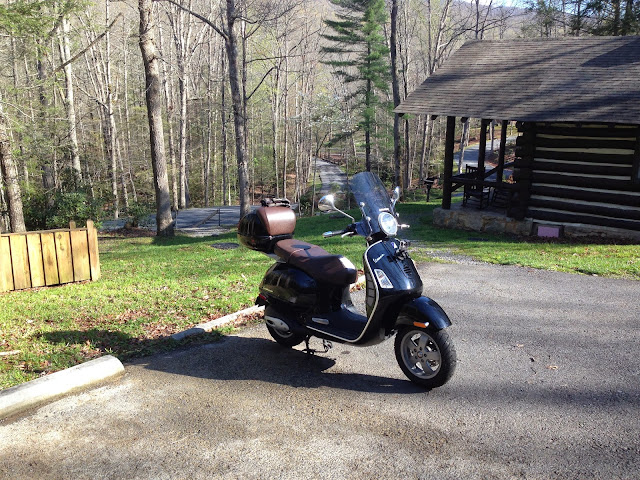 Razzo outside of our cabin. 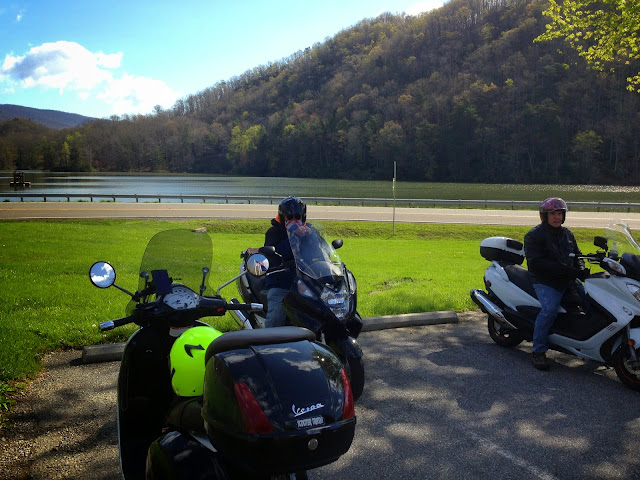 Meeting up for the Woolly Mammoth ride 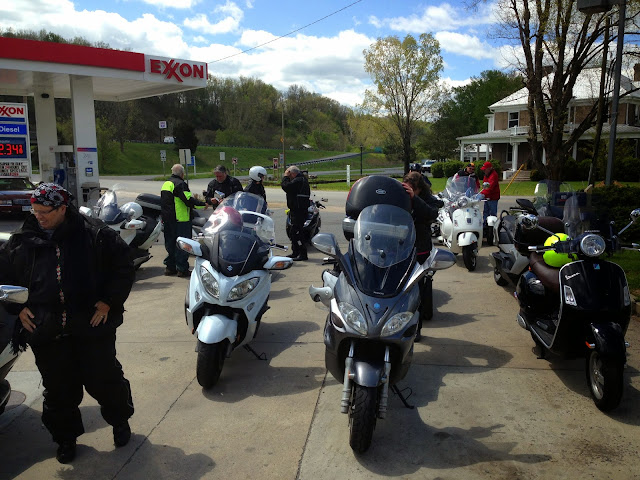 Scooters at a stop in Virginia

We all had dinner in Russ' cabin. Sue prepared Spaghetti and everyone chipped in bringing salads and beer. 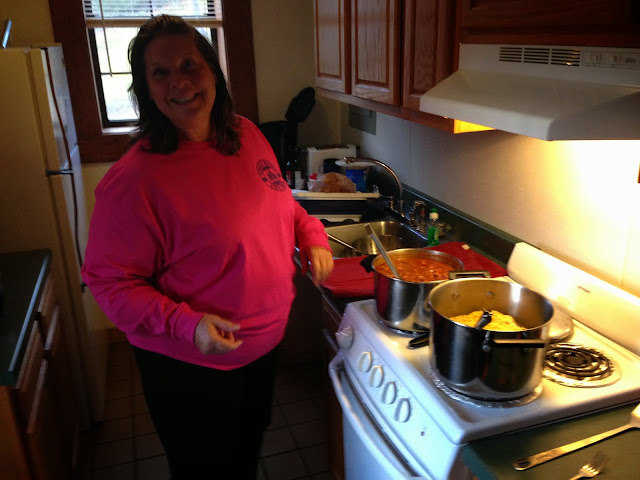 Sue preparing Spaghetti for the masses

Day four had us breaking into smaller groups for rides.  Our group was me, David, Jim, Mark and Theresa.  We got aggressive and took a long route, 210 miles, into West Virginia and Kentucky.  It had us riding north over the Back of the Dragon, just north of where we are staying, then some rural roads in VIrginia.  The moment we crossed into West Virginia, the first thing we saw was a huge coal mine.  Then the houses of the workers lined the road the entire time we were there.  It is a stark change from the beauty of Virginia.  We stopped for lunch after we got back into Virginia, then decided to head to Kentucky, where the ride got good again.  We went through the Breaks, a park on the VIrginia / Kentucky border that was a real beauty.  Then, on the way back to the cabins, we found route 80, that crosses a mountain north of Saltville,  It was the curviest, hilliest road ever. 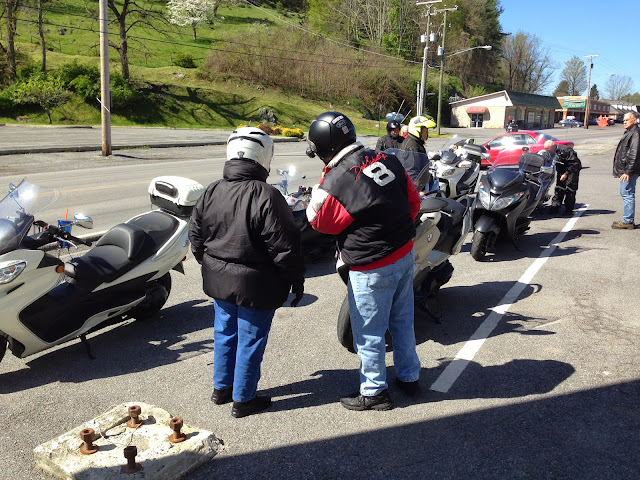 Group of six in West Virginia 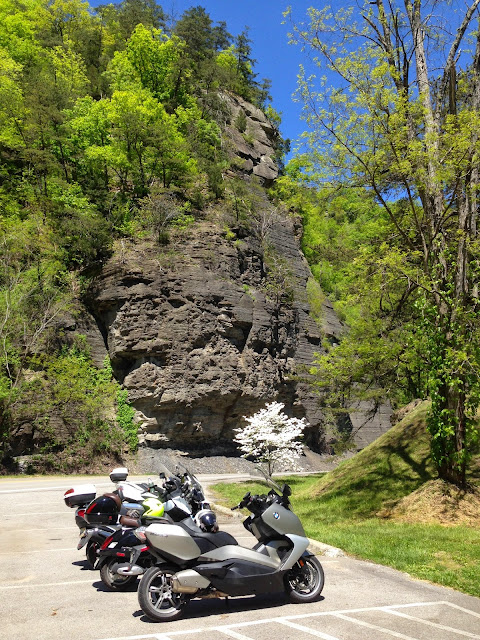 At The Breaks State Park 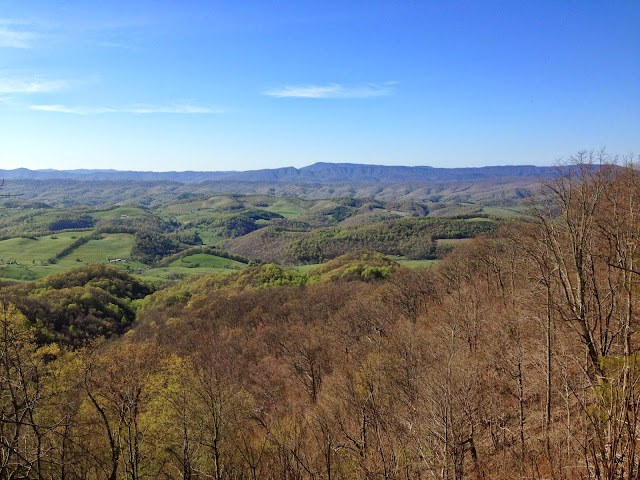 
Day five had everyone heading into different directions.  David and I rode separately, up the Back of the Dragon again, then to Saltville so we could try 80 again.  It turns out that, for me, my favorite roads are those that run through the valleys.  We had lunch at a little diner, Ward's Drive-In, a perfect road trip place to eat. 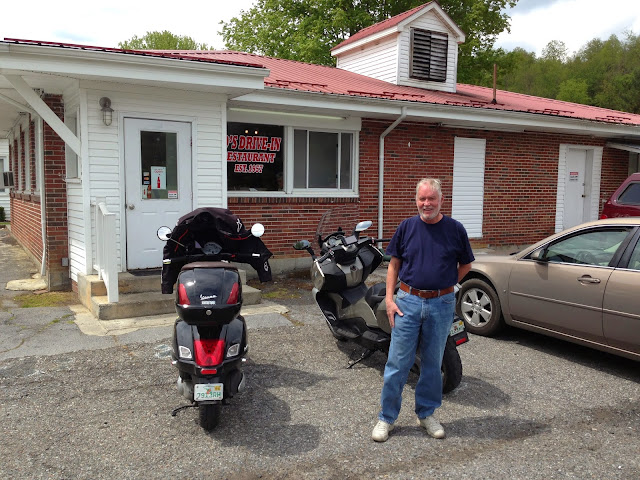 I have better photos, but can't get them off my Canon camera.  These were all from my iPhone.
Posted by Bill Leuthold at 4:12 PM