I started riding scooters while working in Bermuda at the end of 1990.  I bought a Suzuki FB100, a small motorcycle rather than a real scooter.  It had large, spoked wheels, a three speed manual transmission with automatic clutch.  The rear brake was activated with my right foot, like a typical motorcycle.  I bought it for $850. and sold it after three years for $450., so a nice, economical bike for sure.

My wife and kids bought me a scooter for me for Christmas, 2002.  It was a Malaguti Ciak 50, a large wheel, two stroke, automatic scooter that I still own.  It tops out at maybe 40 mph but is a great neighborhood scooter.  I started looking for country roads where I could ride without being run over by the cars and found some cool routes that would take me to Georgia.  I had several 100 mile rides on a 50.

But these rides made me want something faster, so, on the day before my 50th birthday, I went to the local Vespa dealer and bought a brand new GT.  That was over 8 years ago.  We have become good friends.  I call it Rocket, short for Saturn Five Rocket Ship, the one that blasted all of the Apollo missions to the moon.  I named it that because it is the polar opposite to those machines, but fast enough to be fun.  We have ridden all over North Florida and South Georgia. Also two rides to North Carolina and a friend carried it by trailer to Denver so we could ride in the mountains.  Fantastic ride that one.

I then bought a 2005 GT from my brother in 2012.  This one was to use as a backup in case Rocket had problems.  I used it for a 2000 mile ride to Franklin Tennessee to ride down the Natchez Trace Parkway with our local club, 7 Bridges Scooter Club.  It was a very nice ride except I dropped it on a very narrow road at a very steep grade.  Scraped the side and broke the rear brake lever.  The last 1500 miles of that ride were with front brake only.  I also used it for an Iron Butt Saddle Sore 1000 ride last June.  1000 miles in 18 hours.  Smooth and comfortable the entire way.  I sort of called it Lightning.

After renting a BMW GS for a 2700 mile ride from Denver to Glacier and back last July, I bought a Honda NC700X in September.  It is a fine bike that I rode to Detroit, Chicago and back in October.  2500 miles in 8 days, averaging around 65 mpg the entire way, mostly at 75 mph on interstate highways.  It is not nearly as much fun as the Vespa GT, but has its place.

And two weeks ago, a friend who is moving to Italy asked me to hold her newer Vespa GT for her for the three years that she will be gone.  Her name is Vanessa and she only has 3800 miles on her.  I will use her enough to keep her healthy, but I did try her out last weekend and found her to be a great scooter.  Smooth, quiet and fast. 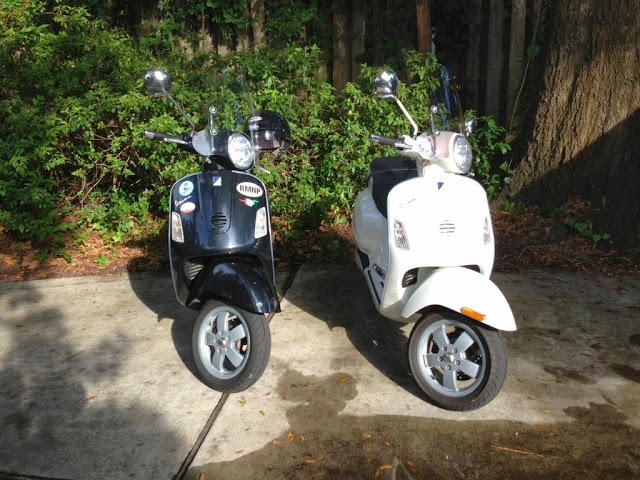 Rocket and the now sold Lightning 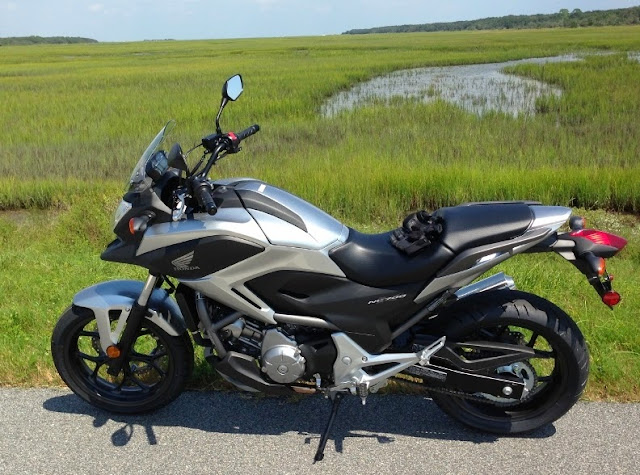 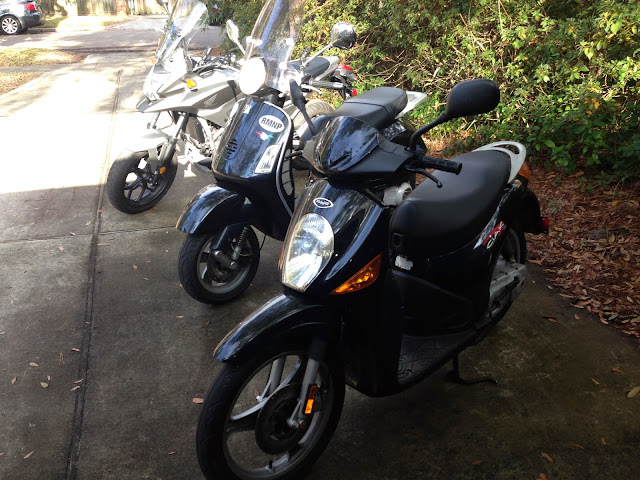 All three with the Malaguti, my first, up front
Posted by Bill Leuthold at 6:11 PM