2018 Cannonball: Getting Support Supplies to Lostboater

The 2018 Scooter Cannonball Run is driving me crazy.

After not finishing in 2014 because of a lack of spare parts and mechanical skills, I vowed to fix that for 2016.  In that one, I started with a Cannonball ready scooter, less than 10,000 miles on Vanessa instead of 57,800 on Rocket in Hyder for the start of 2014.

Rocket had a variator that Boris had put in it many miles before.  Not a new one, but one he had taken out of another scooter.  They only cost $60.00, so starting with that thing was a bad decision.

Of course it broke...while leading...on the next to the last day....and I didn't have a spare.

So in 2016, I carried two variators while starting with a new one.  It didn't break.

This year I am even more prepared than last time.  I made a box of spare parts to take to Ken's house in St. Petersburg.  In it are parts I have been collecting for a while.  Two variators, three drive pulleys with their "O" ring.  Several one use variator nuts.  Several sets of rollers and variator slides (no sliders, they are crap).  I also have fuses, a starter relay, two coils, three spark plugs and caps.  A headlight, air filter, oil filter, hoses, three drive belts and spare nuts and bolts, enough to take care of anything but the biggest catastrophe.  I am also bringing new front and rear tires, mounted, and a five gallon gas tank, so on long days, I won't have to find gas stations.  If the worst happens, blown engine or something terrible like that, I will buy a scooter along the way and ride it home.

On this weekend, while preparations and keeping up with what everyone is doing, I had to get the stuff to St. Petersburg.

I fit it into my Miata.  Mostly in the trunk but the small dry bag had to go in the front seat.  The air pump went there too.

I wanted to drive the entire route with the top down and succeeded until getting to the I-275 turnoff just north of Tampa.  I could see a black band of clouds ahead, so I got off the interstate to stop and put the top up.  I got caught by a traffic light so simply did it there, but I stepped out with my bare feet (they were getting too hot inside the shoes without the air conditioning turned on).

Just my luck, I stepped onto a small, sharp piece of glass and poked a hole in the bottom of my foot.  It bled for a few minutes, right on the clutch pedal and dead pedal left of that.

Once back on the highway, the rain was biblical.  I went through at least ten miles where I could barely see in front of my.  It was very dangerous as I was going as fast as I felt comfortable while others were doing the same.  But some blasted by like it was a sunny day.  Luckily, no accidents before the sky lightened and I could make it across the Howard Frankland Bridge to St. Petersburg.

I dropped everything in a neat pile in Ken's new garage, then spent twenty lovely minutes with his wife Vicki.

I should have contacted Walt about visiting Tampa Bay Watch, our cause for fundraising in team Squadra Lumaca this year, but instead got in the car and headed home.

7 hours on the road for the delivery. 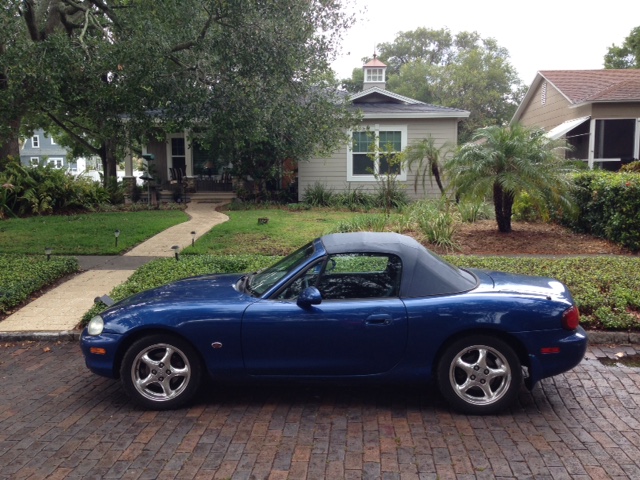 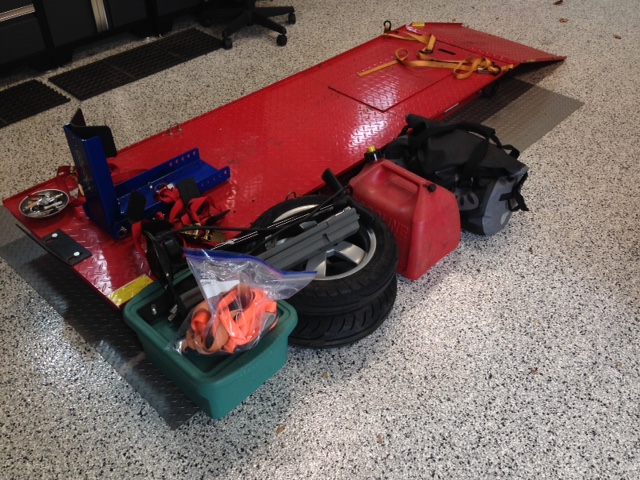 The lift is Ken's.  It is not coming with us.  My stuff is in the neat piles.