I must be the last person on earth who gets his boarding pass at the airport.  When you do that on Southwest, you get the last "C" place to board.  I got two of these, but the advantage of this is you get to choose your seat mates.

The first leg from Jacksonville to Chicago had me between a racist Pentecostal Preacher and a beautiful young HR worker.  Both were nice, the preacher talked too much and it was quickly apparent that he saw a big difference between white and black people.

On the next leg, Chicago to Seattle, I was dead last.  They closed the door behind me.  But an indifferent couple had left a window seat.  I took it and was rewarded with an incredible view of the line of volcanic mountains along the Pacific Coast, with a close view of Mt. Rainier. The wife had been sleeping the entire way while her husband watched movies on his iPad, but she perked  up when she saw Mt. Rainier. 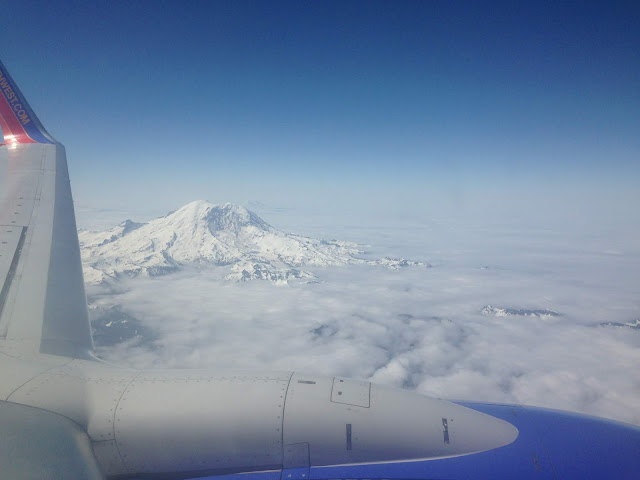 Up close and personal with Mt. Rainier.

The window seat was right next to the engine.  This is the same airline and airplane that recently had that same engine blow up, killing a young mother.  I was glad it didn't happen this time. 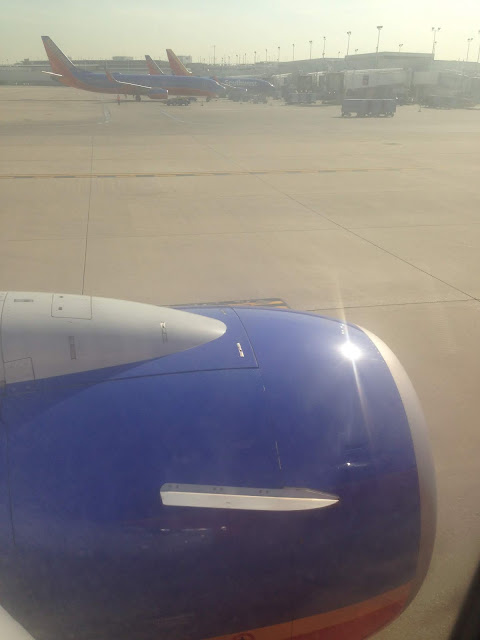 So glad this engine didn't blow up.

I arrived and found the Uber pick up location and called for an Uber Share.  I followed the driver on the screen and it continued to jump around, 4 minutes away, then 9 minutes away, then picking up another rider, etc.  Then I saw him drive right past me, checked my phone to see that he had called, so I called him back.  He said I didn't answer and he couldn't wait. I asked him to cancel the ride.  He said he couldn't and told me to do it myself before hanging up on me.

I then got a Uber X straight ride for ten dollars more.  The driver was a wonderful fellow from Ethiopia.  We had a very nice conversation before he dropped me off.  By the way, almost all of the Uber drivers at the airport drove a Prius.

I met Donald Cowart at Coffee Tree, where we had nice sandwiches and coffee.  Then I picked up Vanessa.  She cranked right up and ran well.  It took ten or more minutes to get her loaded with GPS, Spot, and the suitcase strapped to the back.  Then jacket, gloves and helmet.  Sometimes it is easier to drive a car. 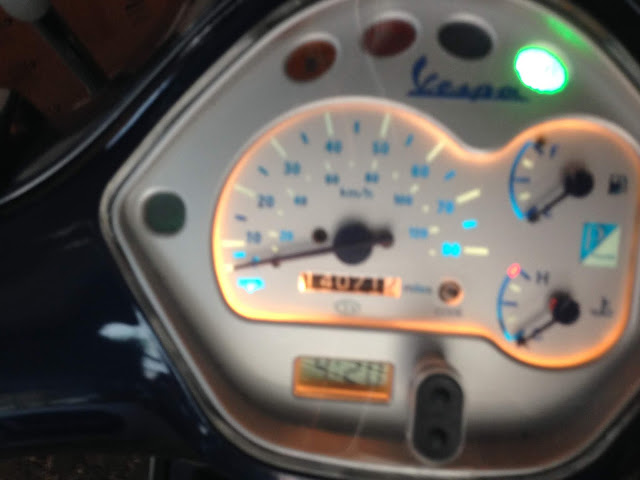 Blurry but the starting mileage for the Big Adventure.  14,071 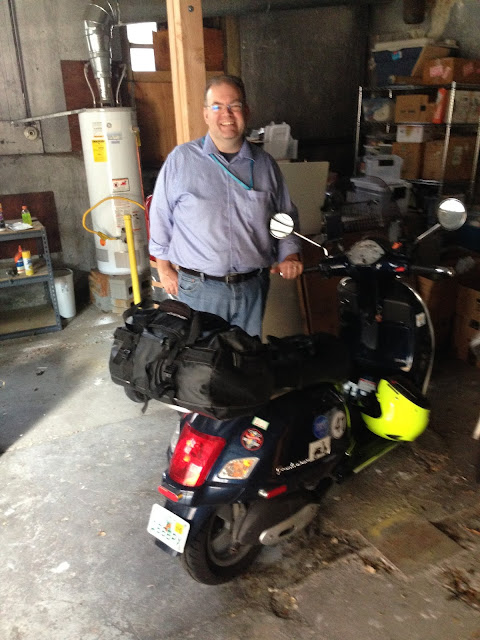 Donald and Helen kept Vanessa for me the last year and a half.
She looked and rode well.

When I rode off she felt soft, so I rode to a sketchy Shell station for air.  She was down to 20 pounds in front and rear.  I pumped them up to my usual 30 each and she felt better.  The oil was good but the coolant was below the low level.  I bought a bottle of water and added almost a pint before it was back to the full level.  It has been almost two years, but she clearly has a leak somewhere.

She rode fine and I rode her across Lake Washington to Belleview for the night in a LaQuinta Inn.  I was supposed to have dinner with my cousin Drew, but he broke some ribs recently and was in pain.  I will see him briefly tomorrow to pick up a helmet and Vanessa's master key.
Posted by Bill Leuthold at 7:42 PM