After paying for the cost to support me and Vanessa on the 2016 Scooter Cannonball Run, and reinstating my member-in-good-standing, Ken let me know that there was another Oyster Tour in the works.  This one would not necessarily include oysters, but I was interested anyway.

It would include staying two nights at the Stephen Foster State Park near White Springs, Florida.  From there Ken suggested we ride 90 miles up to Douglas, Georgia to check on the progress of the XP 82 airplane undergoing restoration (mostly reconstruction) in a hangar at the Douglas airport.  We had seen it last year and were curious.

I worked at my usual job most of the day, leaving my office at around 3:30, went home and packed, and was off just after 4:00.  Because the sun was setting, I chose the fast route.  Interstate Highway 10.  I arrived at 5:15 and found Ken, Jim and Gary in the cabin.  We hung out for a few minutes, lamenting lack of preparations, mostly beer for me, before heading out to dinner at a "New Seafood Restaurant" in Lake City.

The "New Seafood Restaurant" turned out to be a Cedar River Seafood restaurant, part of a chain that has been in the North Florida area for forty years.  Luckily it was good.  And I was thoughtful enough to get something with oysters in it, oyster stew, that was quite tasty.

After dinner we stopped at Publix for provisions, mostly beer, coffee and snacks.

When we got back into the car, heading back to the park, Gary asked the driver, Jim, if we could stop at a convenience store to get some CocaCola.  We all thought that Publix probably had that and it would have been more "convenient" to have gotten it there.

I got the top bunk as usual and had a good night's sleep.

I got up early to finish a book I had been reading.  Lassoing the Sun by Mark Woods.  Mark is a columnist with the Florida Times Union who had taken off a year to write about the state of the National Parks.  But during the year his mother was diagnosed with cancer and quickly passed away from the disease.  The combination of parks and death made for a fine read.  Highly recommended.  I am going to see if Mark might be interested in writing the book about the experience of Rocket and Me in the 2014 Scooter Cannonball Run.  That book will probably be called, believe it or not, Rocket and Me, the adventures of a man and his scooter.

We then ate some of the cheese danish I had purchased at the convenient Publix along with strong coffee that Ken and I prefer.  It turned out to be decaf, but I never noticed.

We picked up Jim and headed north to see the airplane, stopping for fuel within a mile of the park entrance.  Ken struck up a friendship, as he often does, with one of the station attendants.  She was all smiles as we took their photo together.  Then we got another mile or so when Gary decided he needed coffee.  So Ken found a fine coffee shop in Jasper, where we all casually drank down some nice joe while discussing the local crime scene with a young police officer, who happened to drop in while we were there.

We finally were able to get in some miles and headed north with a mission.  Only two more stops.  One when Ken spotted a memorial to Martin Luther King, and the other when the coffee caught up with me so we stopped for a quick pee into a drainage ditch.

Upon arriving in Douglas, we were hungry and visited our now usual restaurant.  It is the one with the crashed plane in the parking lot.  Cute.

Then we traveled to the airport where we rode on the taxiways to the hangar where the XP 82 was last year.  It wasn't there but we did get to see several other restored planes inside.  Then we rode towards the airport office building to see where they were hiding the restoration project when we couldn't help but notice a shiny airplane inside an open hangar door.  We found it!

Ken knows everybody, and his, and our, friendly interest seems to make everyone want to show us the work on the plane.  There were four people working on sheet metal when we arrived.  They pretty much stopped everything for a half hour to show us the progress.  It is impressive.  The plane is nearing completion with the first flight coming as soon as April.

We rode back to the cabin in the park on a different route, 441 this time, and got back in time to have a beer before leaving in Jim's Subaru for Lake City's finest Italian restaurant.  Of course, after two weeks in Italy this fall, this one fell a little short of that experience, but the food did the trick and we were fulfilled.

I didn't sleep well and woke up with a visit from my old friend Lucy Bowel.  Took care of that and felt well enough to have lunch with Ken and Gary at Fat Boys BBQ in White Springs before heading home.

That ride wan enhanced when Ken decided to ride some of the way with me.  He had just bought a nearly new Vespa GTS 300 and wanted to check the top speed.  We got onto I-10 and quickly gained speed.  I was in the lead and found that he was mostly able to keep up, but when I wanted to, I could pull away.  That shouldn't happen because I was on Razzo, a 2005 Vespa GT with 198 cc, where he has 278cc.  He also has fuel injection, so something was up.  I think we can get the speed up with a few minor adjustments.

It was a very nice way to spend a few days.  I am looking forward to the next one when David Masse will be joining us for a ride to Apalachicola and Cedar Key. 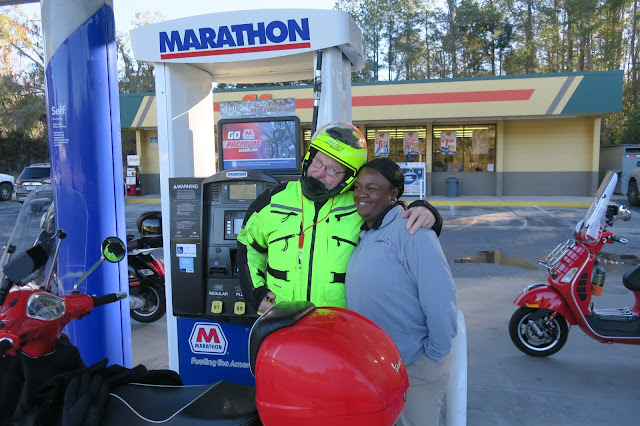 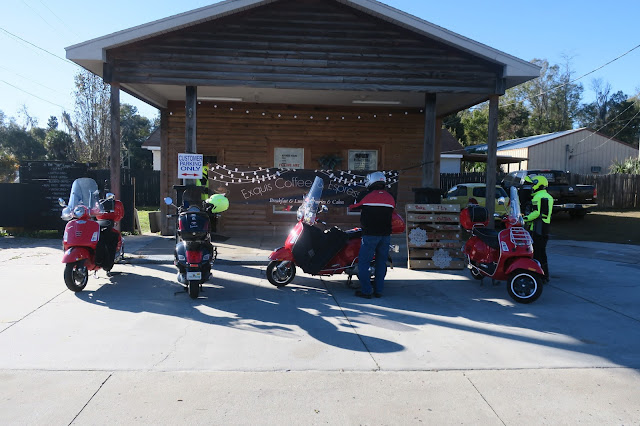 The "Gucci Coffee Shop" in Jasper. 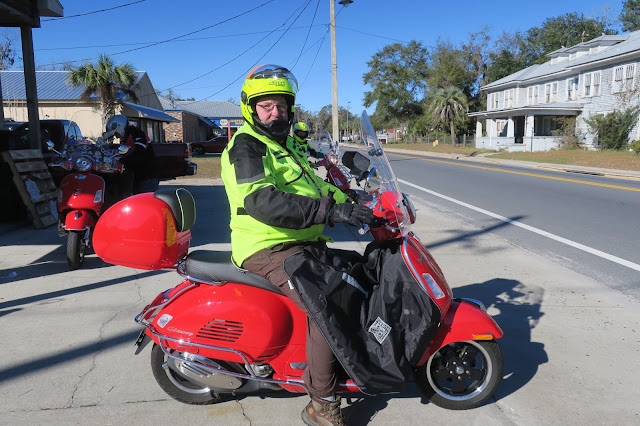 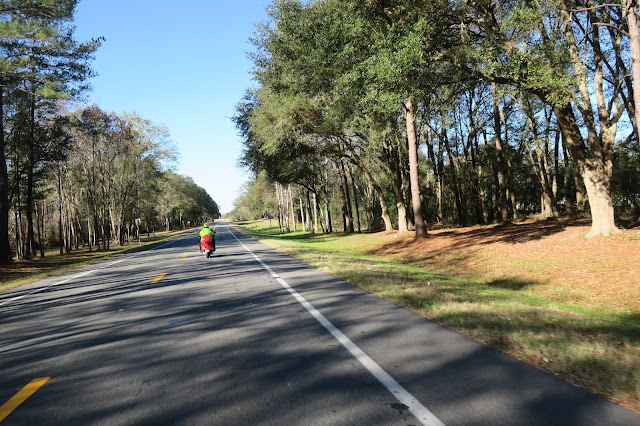 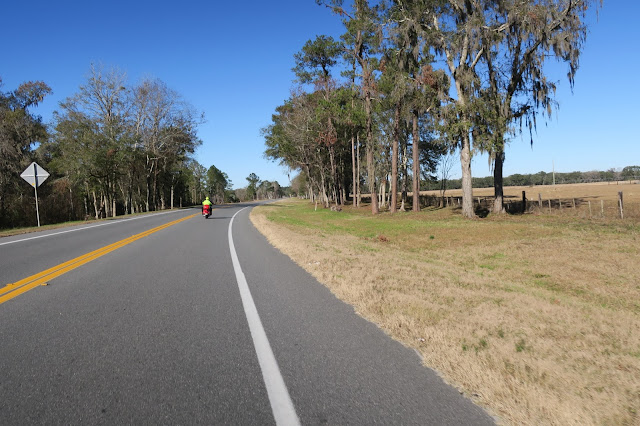 A rare curve in the road in North Florida. 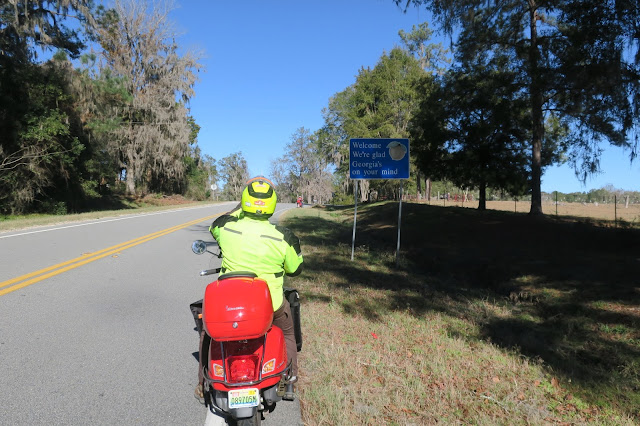 Ken stopped to memorialize our crossing into Georgia. 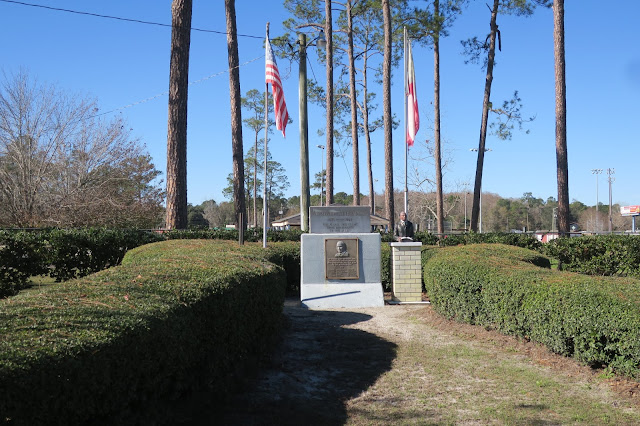 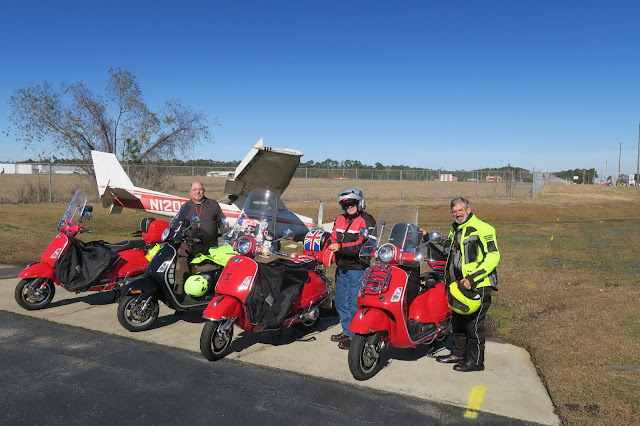 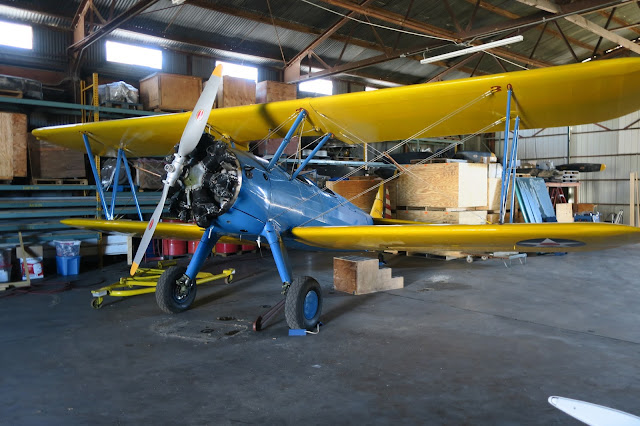 While looking for the XP 82, we found several other restorations, including this Stearman. 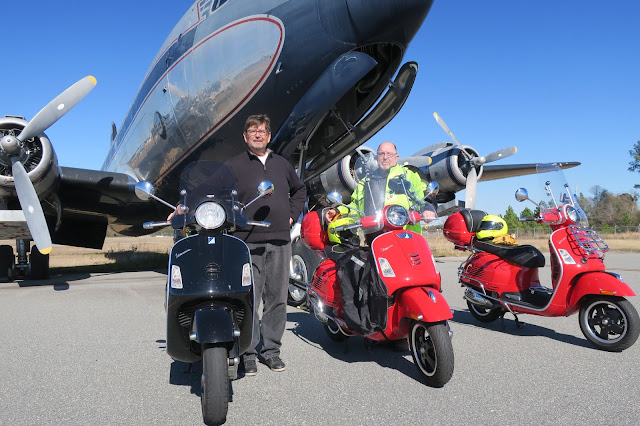 Me and Ken and our scooters (Jim's too, but he took the photo) 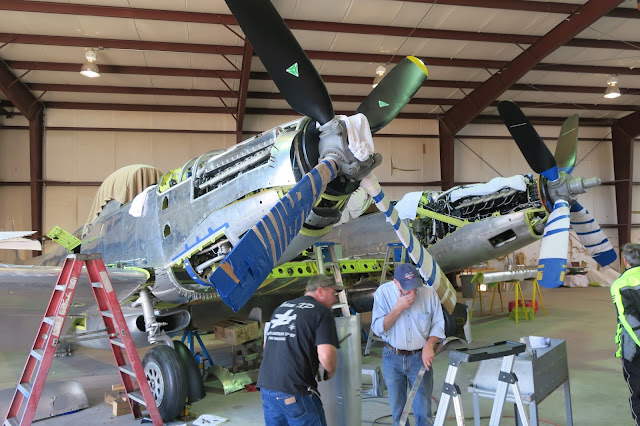 Guys working on the plane 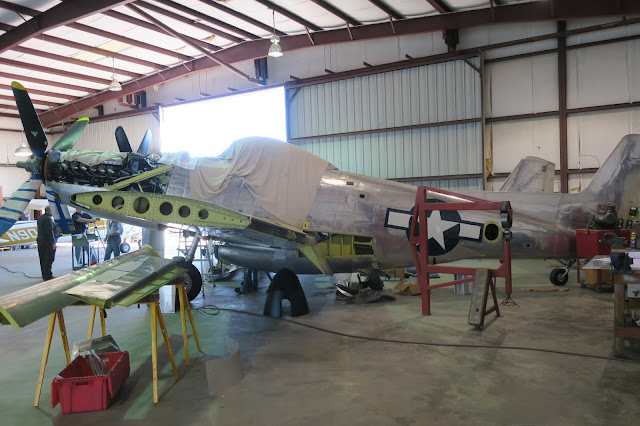 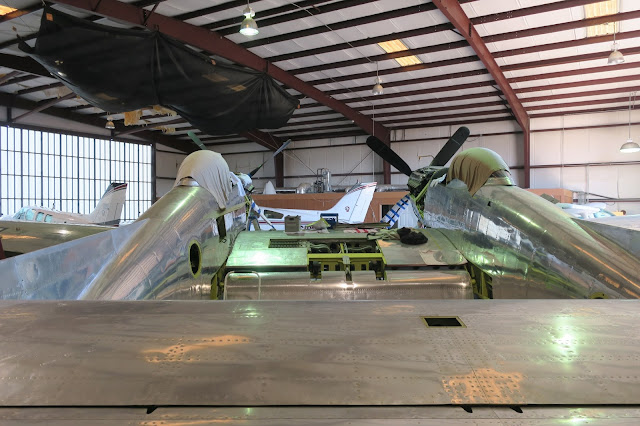 A shot to show the two fuselages. 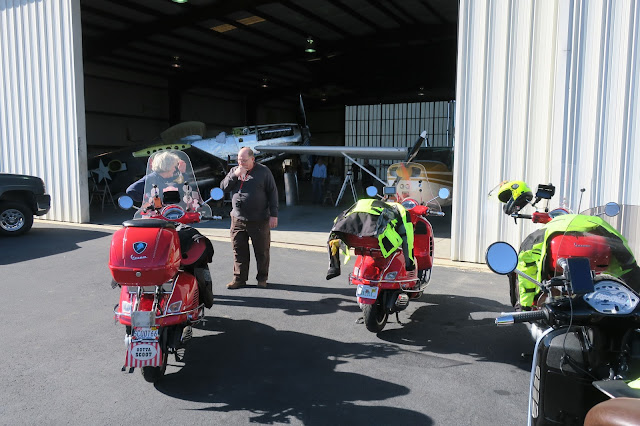 The plane peeking out of the Hangar, with the wild bunch of scooters outside. 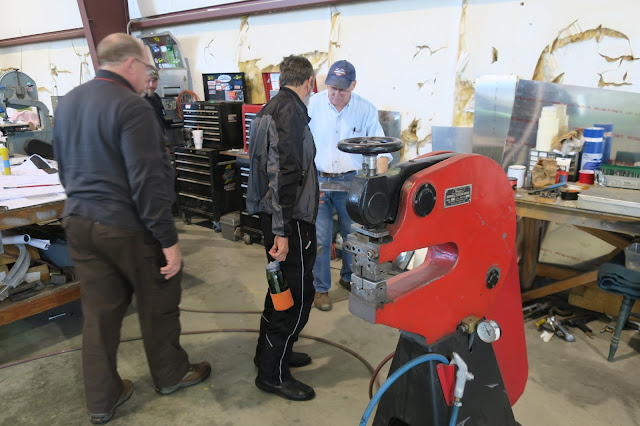 The guys there are so nice.  They even showed us some of the metalworking techniques. 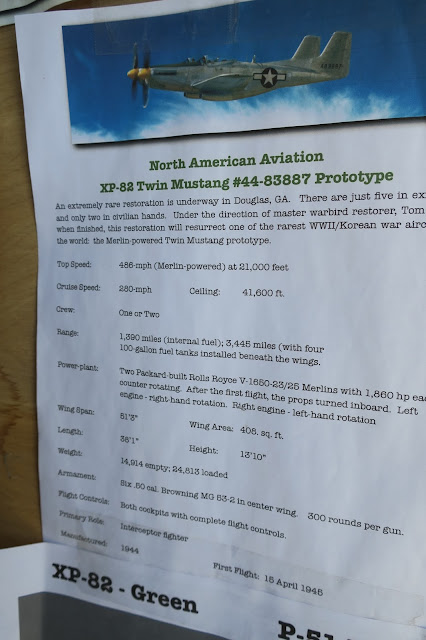 Details of the restoration of the XP 82 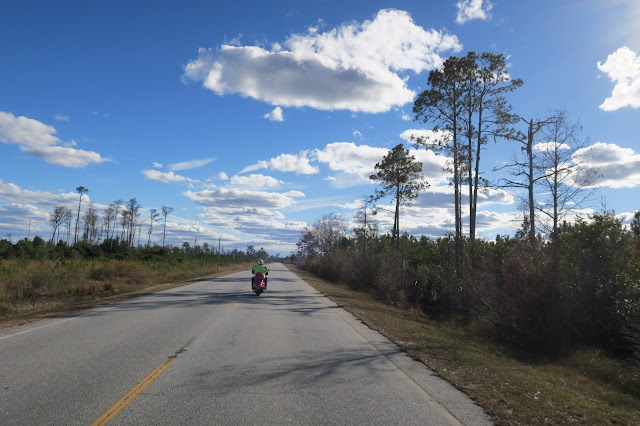 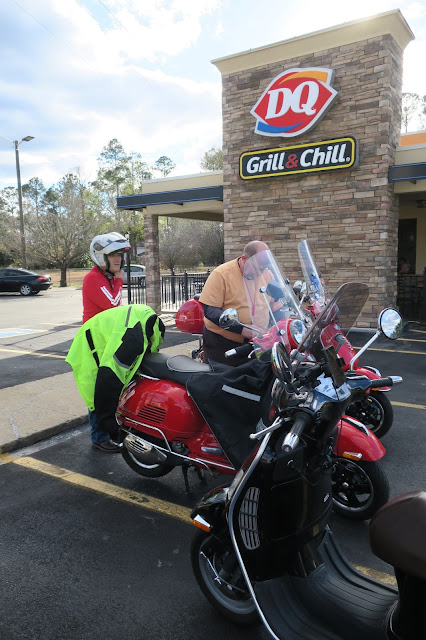 Gary needed a drink, so we stopped at a Dairy Queen along the way back to the park.
I was going to get a shake but they posted calorie counts.  Decided to abstain. 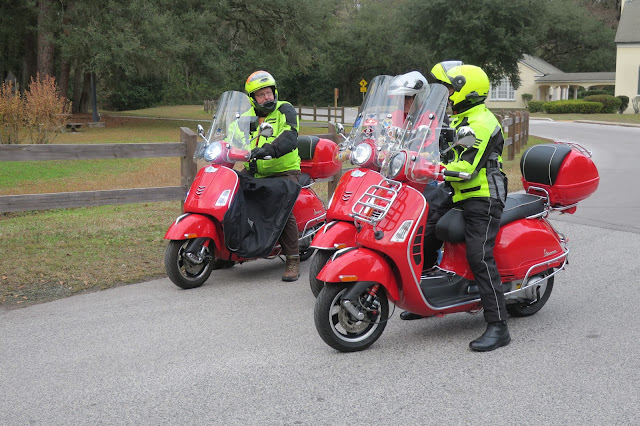 The three red scooters as we dropped Jim off at the park. 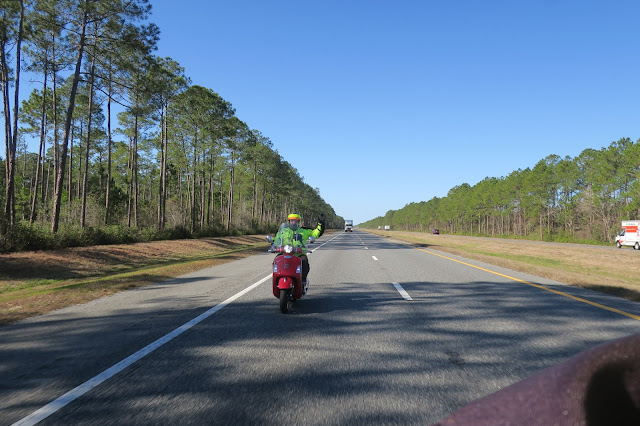