Ken and Galen dropped me off around noon at Mercy Regional Medical Center in Durango.  It is a modern hospital that took me straight in from the Emergency Room.  No waiting is always good.

I was assigned a room and a kind, beautiful nurse.  She made it bearable.

The doctor was a youngish fellow who knew his stuff.  It turns out he is a mountain biker with a wife and son who suffer from Celiac disease.  Because they have a very limited diet, he follows suit and has eliminated those foods from his diet as well.  Good guy.  He gave me some suggestions for dining in Durango.  I took his advice and ate at two of his suggestions.

When I told him about my Factor V and blood thinner, the first thing he did was order an INR blood test.  It showed my levels, always between 2 and 3 when tested at home, to be 5.1.

He also thought that the swelling and bruising may be from a cracked bone so he ordered an X-Ray.  As in St. George, it was negative for any bone breakage.

To get the INR down he ordered two units of frozen plasma.  It takes time for the plasma to thaw, so I ended up there until after 8:00 that evening.

I called Uber for the long ride into town.  Apparently the hospital used to be in town but was moved to a new development a few years ago.  The driver took me to the Best Western downtown so I could see the town on foot. 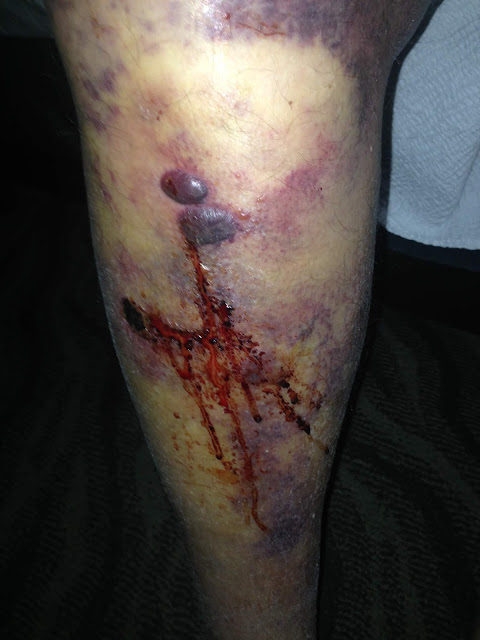 My leg in Durango.
The blood was weeping from the wound, the blood blister and weeping through the skin.
What a mess.

I couldn't get to sleep as there was great stinging pain coming from the skin around my right calf when I lifted it into the bed.  Elevation made it worse.  I would get up when it became unbearable, then walk around the room.  That made the pain go away so I would lay back down.  Within five or six minutes the pain returned and I repeated the walk around.

Then gave in and sat in the only chair in the room, got three pillows that I put in my lap.  I laid my head on the pillows and sleep finally came.

I woke up at around 6:00.  I was able to climb into bed and sleep a few more hours in the bed.

Rest is what I needed more than anything so I hung around the hotel room until after noon.  I could walk so I went outside and limped around the town looking for a place for lunch.  The doctor had recommended East by Southwest, and Asian fusion restaurant.  I needed a salad and ordered a crispy salmon skin salad that was very tasty.  Sitting at the bar I had a pleasant conversation with one of the sushi chefs.  He had had an accident a few months ago while snowboarding, so we had a common interest. 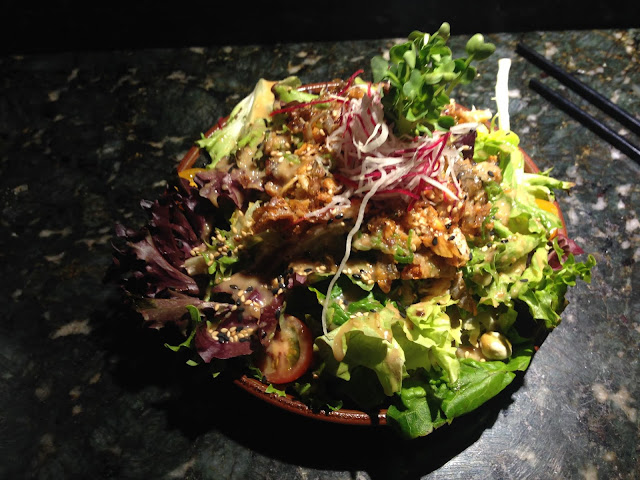 Then the doctor had requested that I get my blood tested during the day.  I found a clinic that would do the work and hailed an Uber.  The car arrived and off we went.  The ride was supposed to be only a couple of miles, so when we had driven twice that I asked the driver if he knew where he was going.  He was recently divorced and from Florida.  He relied on his phone to get anywhere.  He realized that he was taking the long way around, reached into his pocket and offered me a few dollars for his mistake.  I refused.  He was a very nice guy learning the town and I could easily let him off on his mistake.  He dropped me off to the address on our phones, but the place had moved a year ago.  It was another mile to the actual clinic, and I wasn't about to walk, so I called him and he returned, then drove me to the new address without charging, then waited for me to get the blood test and drove me back to the hotel.  I paid him cash for this trip.  It is great when people are so willing to help others.

David arrived mid afternoon and we walked around, then found a restaurant with a porch, where we sat and talked while drinking a couple of beers each.  Very pleasant to be able to relax a little with my brother.

For dinner, the doctor had recommended the Ore House, so we headed there.  It was only a couple of blocks and the walk was good.  It was early but the small dining room was full.  We chose to sit at the bar rather than wait for a table.  The bar was handled by two servers who proved to be very good at their craft.  They were personable, knowledgeable and friendly.

David doesn't eat dinner, but I do.  I ordered the prime ribeye off the menu, along with a spinach salad.  As we were talking with others at the bar, one asked if I had ordered the steak "charred".  I said no and asked Mark, one of the bartenders, if I could have it that way.  He raced to the kitchen and got it done.

The steak was probably the best ever for me.  Tasty, crusty, juicy, fatty, tender, everything that makes a good steak.

We retired early in preparation for me leaving early to fly home.  I was able to sleep like a normal person.

David wanted to see the airport so he joined me in the Uber.  It was a Lincoln crossover so I had plenty of room for my stiff leg.

We arrived and arranged for the driver to hang out to take David back to town.

I was early, wanting to make sure I didn't get held up in security and could relax while waiting.  The security line had zero people when I arrived.  I also had pre-check so it was a breeze.

The flights were good.  On both I asked if I could have a seat with extra legroom and was offered an exit row on the flight to Dallas.  On the flight to Jacksonville I asked the flight attendant if I could move and she said she wasn't supposed to allow that but did anyway.  It made the time in the air  much better. 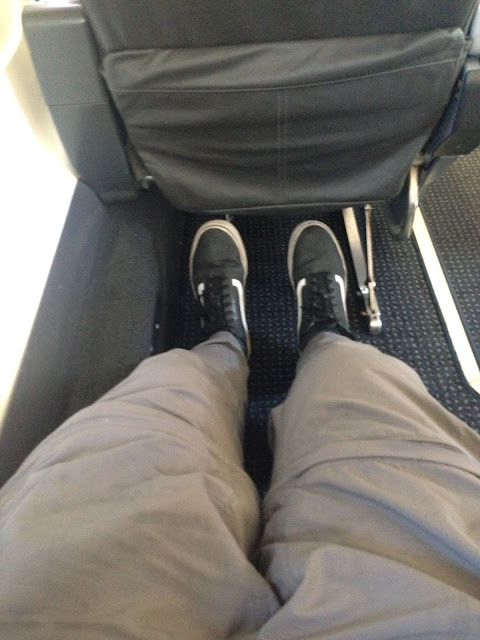 But the problem I had with the trip home was in Dallas.  When I got off the plane in the concourse in Terminal B, I checked the screens that said my flight to Jacksonville was departing from gate C27.  I walked to the airport train station and took the train to Terminal C, then walked the long distance to C27.  There was nobody at the counter and no indication that it was the right gate for me.  I sat there a while, then checked my iPad to see if it was the right gate.  The iPad said I was supposed to be at A25.  So I walked back to the train for the ride to Terminal A, got off and walked a long way to A25 where as soon as I sat down, a voice came over the loud speaker system saying that the flight leaving this gate was going to Savannah and the Jacksonville flight was leaving from A16.  Another long walk on a gimpy leg got me there and we left without incident.

I certainly was wishing that I was still riding, especially knowing that the dirt roads ended after Day 4.  Those last six days were my kind of riding.  I would have loved being part of the traveling show all the way to Virginia Beach.