The Scooter Cannonball Run has been an important part of my life since I signed on in 2014.

In that one, I ran surprisingly well until the transmission failed and I had no spare or enough mechanical skills to repair it properly.  I ended up ninth, but should not have been classified because I missed the last five checkpoints and did not finish.  But the experience was magical.

2016 had me better prepared and ready to roll.  I took Vanessa and we ran with few problems the entire way.  I ended up third in the placings and first in raw time.  It was much fun for me to ride with friends and do well.

The 2018 Run had my attention from the time the route was provided.  This year would be different, more like some earlier runs where significant dirt roads and technical riding was required.  They also added bonus points from photos of places that kept the riders on the assigned path.

It was also to be 200 miles further than 2016, while being covered in one less day.  It had me a little concerned, especially the first four days that were filled with difficult sections.

We began in Morro Bay in the morning of May 26, right at the bottom of Morro Rock.  There were approximately 40 riders there, ready for a challenging day.

I started around mid pack and took a short cut over a pedestrian bridge, suggested to me by my friend Walt.  It cut a few minutes off the route and put me at an intersection with Doug (Old as Dirt), a very skilled rider on a scooter that should be faster than my Vanessa.  I was able to keep up with him on the straights but his technical skills had him pulling away on the twisty bits.  But the road was beautiful and the ride was fun.

At the first major intersection I turned and accelerated when the engine stopped.  It felt like the same problem Vanessa had in 2016.  Her spark plug came apart.  I opened the engine area and found the spark plug cap loose over the plug.  To make it worse this time, the spark plug tip and rod were also in the cap.  Hoping I could get away with replacing this a few times on this day, I stuck it back in and she fired up and we continued.

It was fine until, after passing Check Point One.  I blew by like I always do.  Others were hanging out taking photos.  Several were leaving as I passed and they followed me.  One was Dave, on a smaller, 150cc Vespa.  I was surprised that he could keep up.  We came to a traffic light that suddenly turned red as I approached.  Vanessa threw the spark plug cap again so I had to wave them by as I replaced the cap.

She did this a few more times, at closer intervals, so I decided that I better replace the spark plug, something I reluctantly do on a hot scooter as it will burn hands and can strip the threads out of the spark plug hole in the engine head.

I got started and found that I had two 3/8" ratchet drives, not one 3/8" and a 1/4" that I needed for the spark plug.  Several riders stopped to offer assistance but Tom Drake (tdrake) had a 1/4" drive and stayed to assist.  I got the old one out and new one in and she started.  Off we went to try to catch up.

Only to be held up for 20 minutes by a crew cutting trees along the way.

I rode much of the Sherman Pass road with Tom.  I led him for a while, then signaled for him to pass as I didn't want to hold him up.  He ran at his pace which I could match so we made a good riding pair.

The Sherman Pass was very tight and technical.  The pass was at over 9000 feet so we climbed, then dropped down towards Death Valley.  On the way down, Binh, on a Honda Elite 110 passed us like we were standing still.  He is a rider.

At the bottom, we turned onto a highway.  Tom had fallen behind taking photos but caught up as I was refueling.  Once on the highway, I was able to handily pull away even though we were both on Vespa GTs.  These machines are all different.

The finish was at the Stovepipe Wells Village Hotel.

I bought Tom's dinner for helping me on the road.  Nice guy.  Then dined with my team of Ken, Walt and Scott.  I had the burger that was quite good. 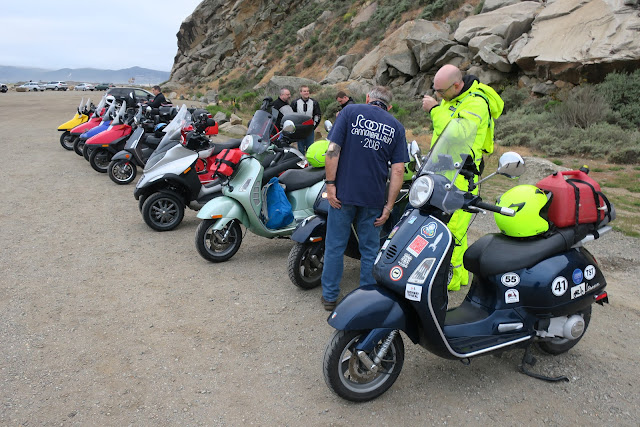 Vanessa ready to head out at the start. 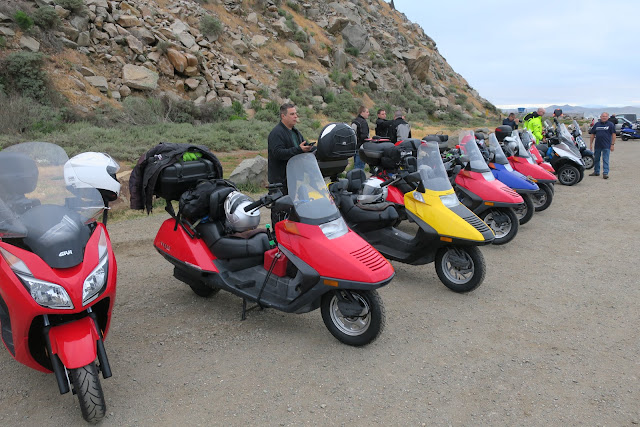 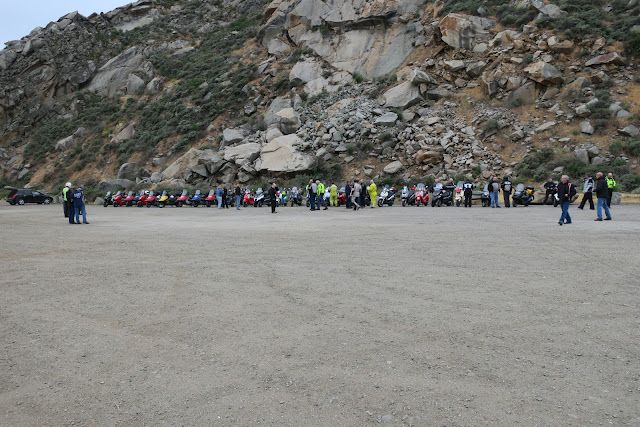 Many scooters at Morro Rock 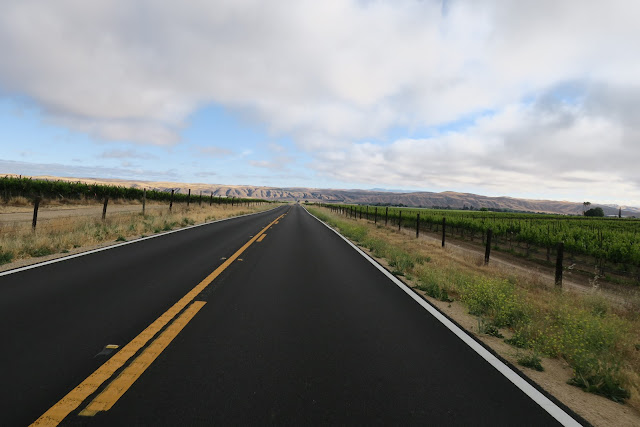 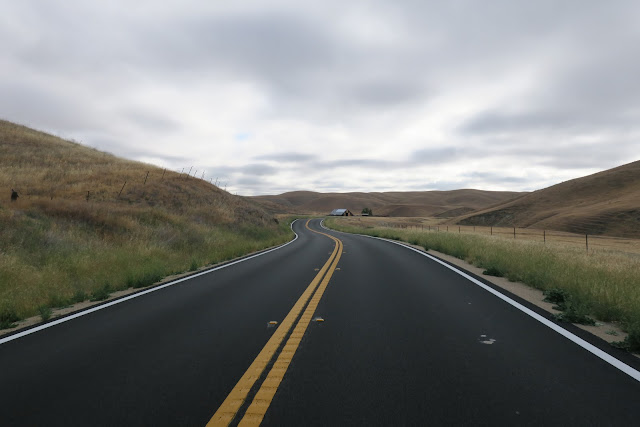 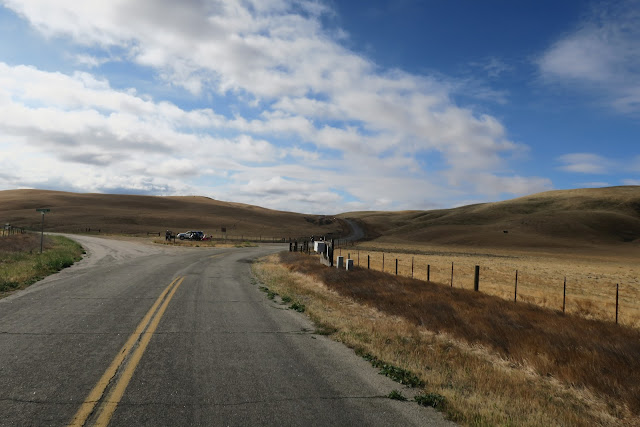 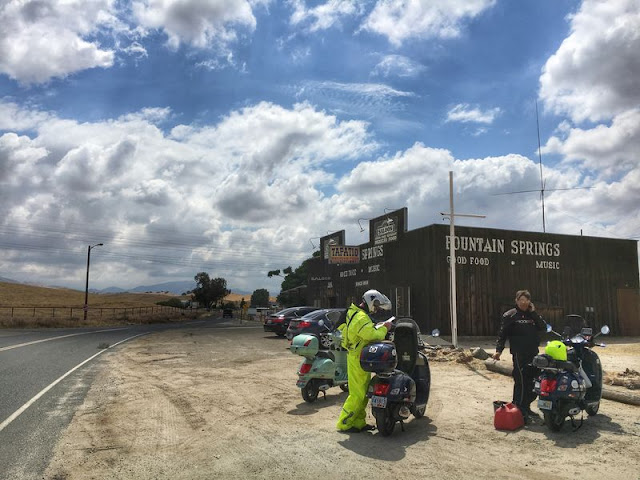 Changing the spark plug.  Many stopped to offer assistance. Tom had the 1/4" ratchet I needed.  Photo by Tom Drake. 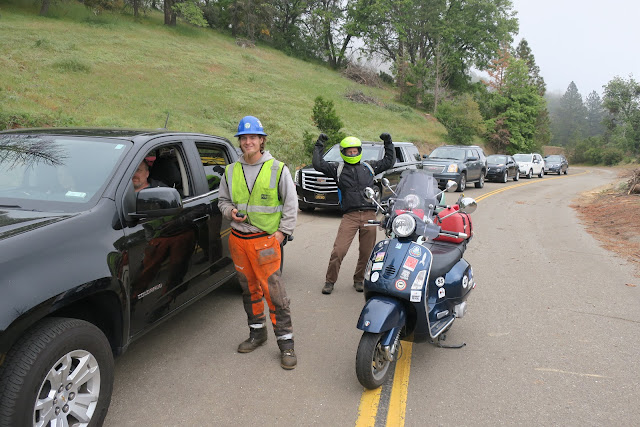 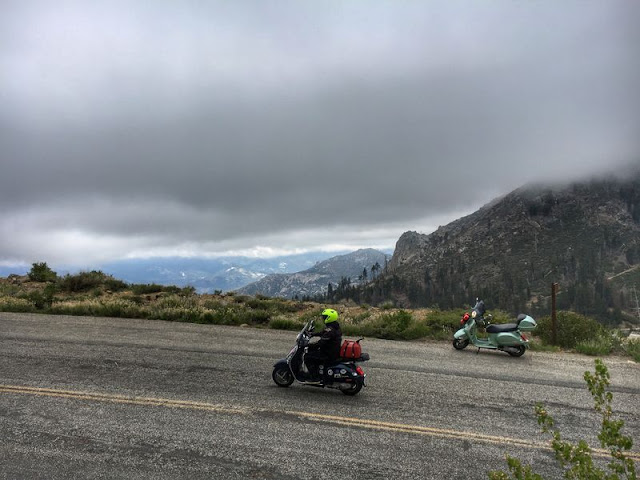 Me riding the Sherman Pass.  Photo by Tom Drake. 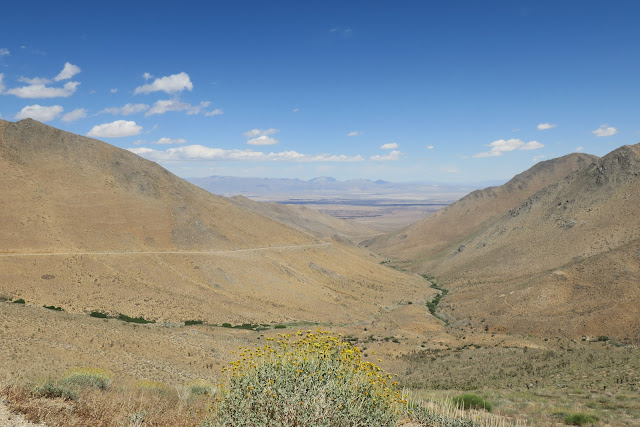 Still up high, but about to ride down a cool road to the highway leading to Death Valley. 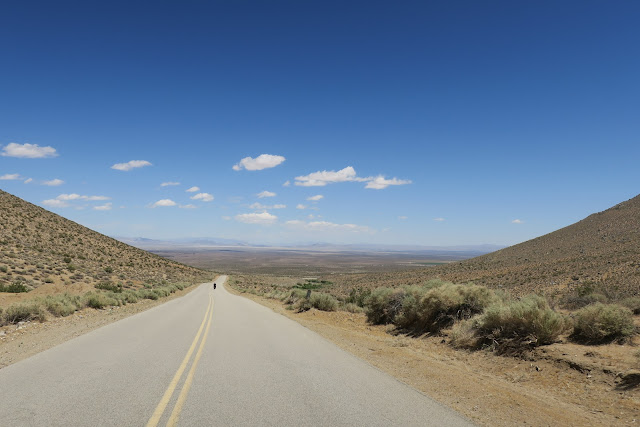 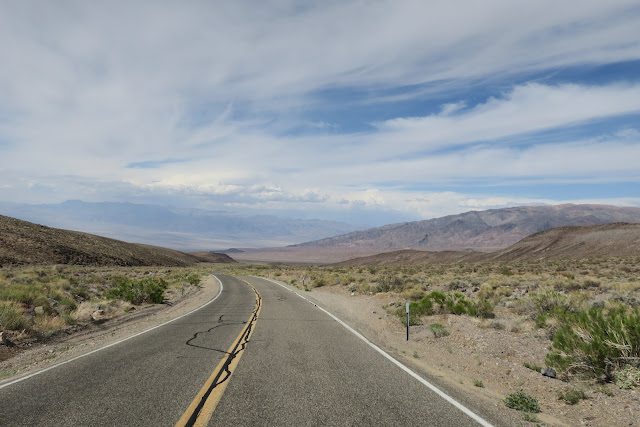 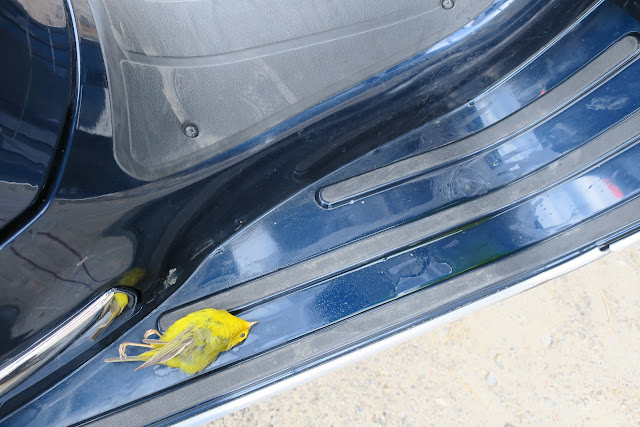 Heading into Death Valley, I was hit on the helmet by a little yellow bird,
later found on the footboard of Vanessa.  Also in there was leaking coolant.


The next morning was Death Valley to St. George, Utah.

I got up and found Vanessa covered in dust from an overnight dust storm.  I had washed her in Morro Bay so this was a little annoying.  I cleaned her up a little, at least the windscreen and instrument panel.

The ride out was spectacular.  Death Valley is a huge place with mountains surrounding the area.  We rode down to the bottom, then along the bottom of the mountains for miles.  What could have been a straight road was nicely curved and mostly smooth.  I had decided after dealing with all the gravel and broken asphalt in the corners through Sherman Pass, that I would ease up on the competitive nature this year and try to enjoy the ride by riding my normal way, a little fast but careful.

I crossed checkpoint one, then the Bonus Photo windmill at a the Tecopa Brewing Company.

I had been concerned by a dirt road just into Nevada since seeing it on the route maps.  It was such a small dirt road that neither Garmin showed it as passable.  It showed up on Google and Tyre, but not Garmin.  I was mostly concerned about getting lost while riding on this stretch.

I turned onto the road, traveled a mile of so and stopped to fill the tank with the 5 gallon spare I was carrying.  The road was narrow and rough with hills, rocks and soft sand to make it challenging.  But it was fair and shouldn't have been a big deal.  After filling the tank, I headed to the next checkpoint slowly.  There were several areas that were difficult but were easily passed.  I finally came to a relatively smooth section and accelerated to maybe 25 mph when I crossed a slight hill and found a large patch soft sand.  I slowed and got into it when Vanessa went down.

I hit my helmet and shoulder on the ground.  I could feel a hit on my right shin but didn't think much about it.  I got Vanessa up and let her sit a minute, then she started on the second try.  Good girl.

She was dented and scratched.  The left mirror was twisted but reseated easily.  The Garmin attached to the stalk appeared to not be working.  The handlebars and front wheel were misaligned by around 15 degrees.  But we soldiered on.  We came across Charlie (twelvetoes) as he was working on his scooter.  He had already fallen three times on the road.  He helped me get the steering aligned, making the ride so much better.

I had checked the maps and found that I could hit pavement to the checkpoint if I turned off on Tuscaloosa Road 11 miles into the dirt road.  I did this and rode a mile or two before finding the beloved pavement.  From there I headed to the check point but decided, since I had already blown the segment, that I would stop at a grocery store in the small village to clean up and get something to eat and drink.

But I wasn't hungry.  I looked at the leg and could see it swelling.  It started quickly and wouldn't stop, so I asked the nice lady at the counter if she had some ice that I could put in a bag to slow the swelling.  She offered some and I began the icing.  I ended up buying bandages, tape, drinks and supplies while there so she was good.

My intent was to continue riding, but the swelling had me reconsider.  I felt that icing in the support truck would be better for the swelling than riding in the heat of the day.  I called Ken who came and loaded Vanessa on the trailer.  Little did I know that my riding in the 2018 Scooter Cannonball Run was over. 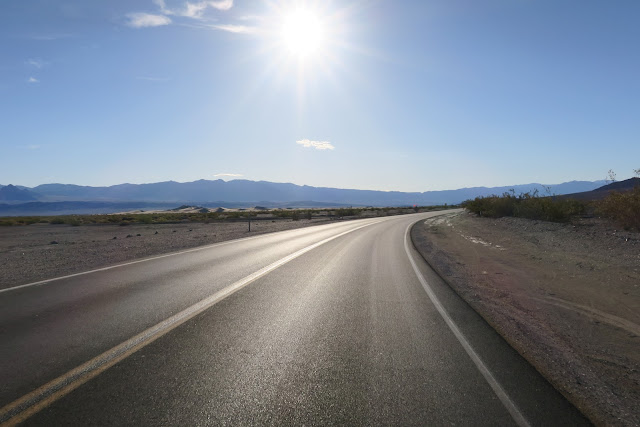 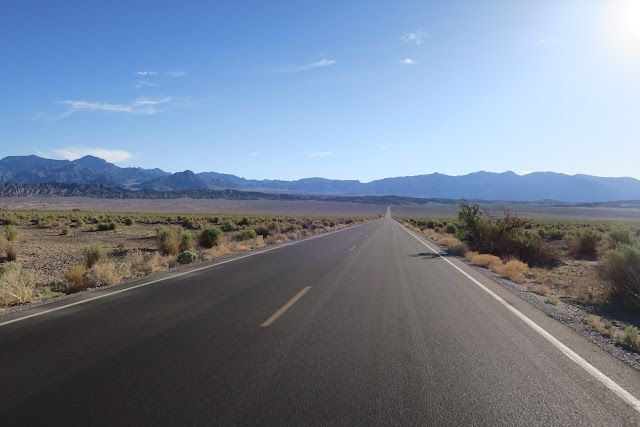 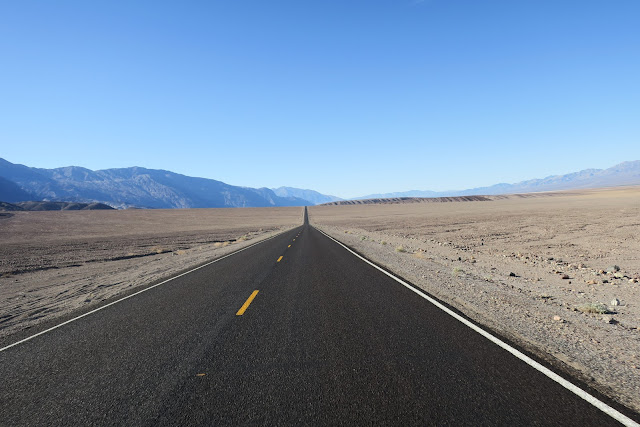 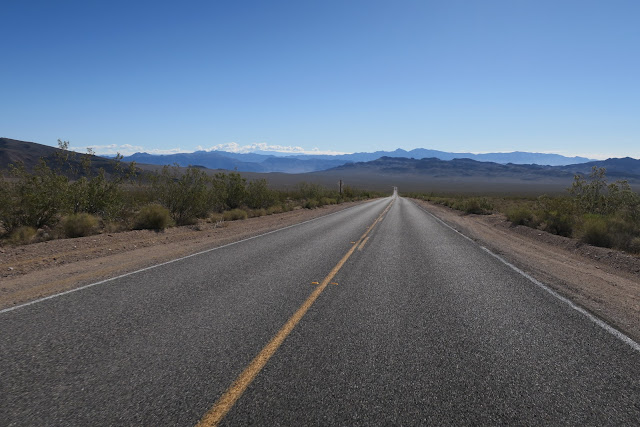 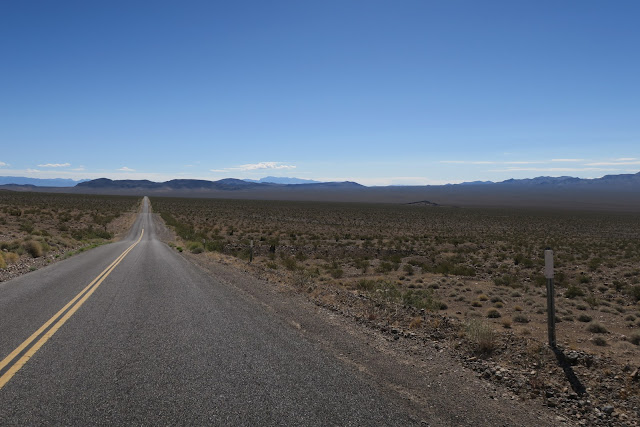 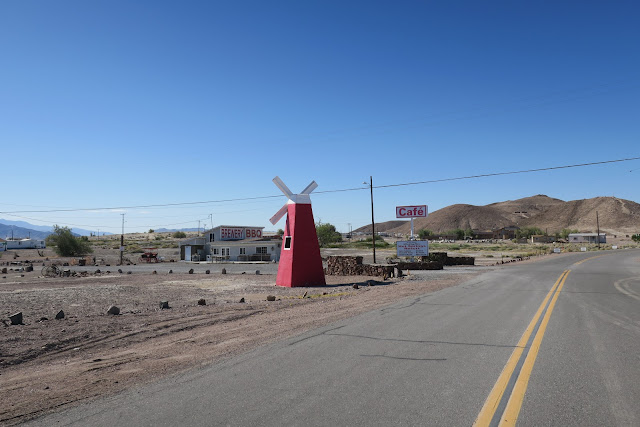 Bonus photo at a brewery 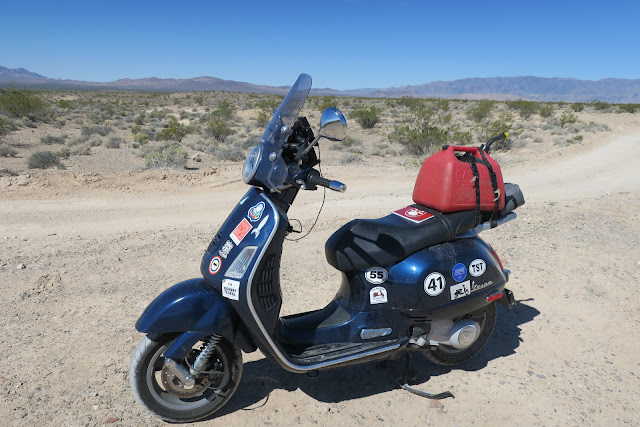 Stop on the dirt road to refuel, just a few miles before the incident. 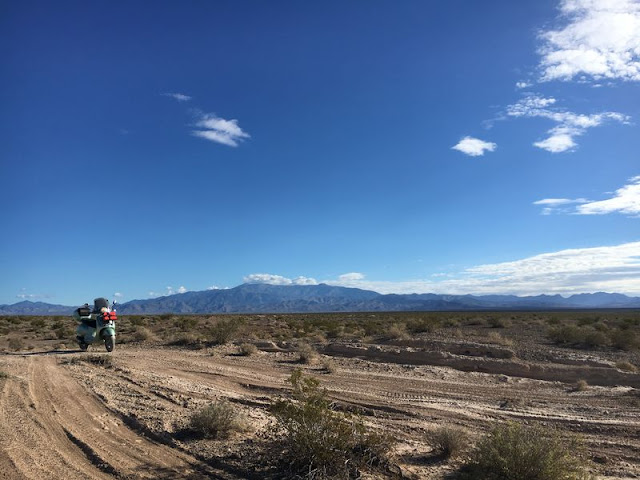 Photo by Tom Drake showing his scooter on the dirt road. 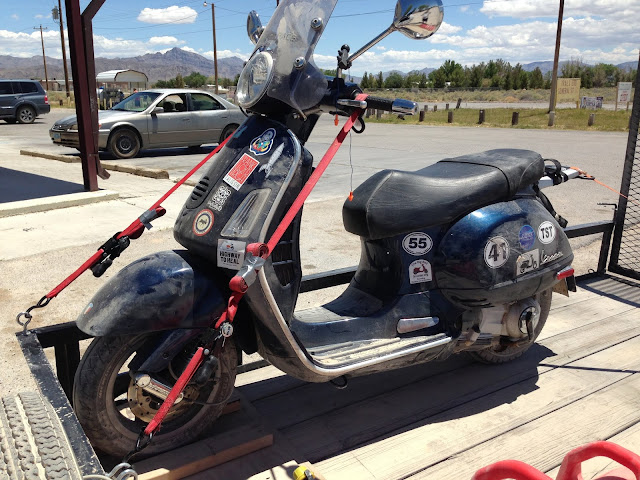 Vanessa loaded on the trailer.  Cannonball done, it turns out. 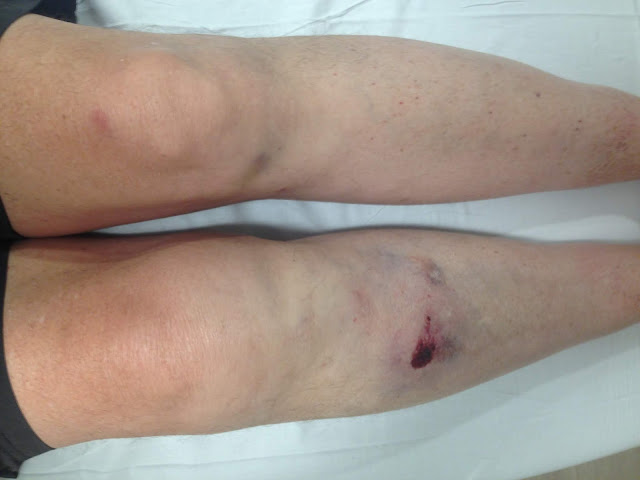 My leg that night at the ER in St. George.  Not bad but painful to walk.