Yesterday, I decided to go to the Jax Solo autocross at the FIRM in Keystone Heights.

I had not driven in one of these in over a year as I had conflicts or disinterest in all of the runs over that time.

But this one had no pressing opposition and it looked like fun.

I got up early and headed out.  I stopped at a McDonalds for my usual race day Egg McMuffin meal.  The voice on the ordering intercom was pleasant and accurate, a refreshing change from the usual McDonalds restaurant.  When I pulled up to pay, the nice young lady and I exchanged pleasantries and I told her that she was doing a very good job.

After heading out from there on the 50 mile journey, I realized thaat it was going to be a hot day, and I hadn't packed any drinks or food. So I stopped at a gas station/ convenience store on 100 approaching the FIRM.  There, I ran into Sean Cavins doing the same.  Then I got my drinks and snacks and took them to the cashier.  I asked her if they had any small coolers to sell and she pointed me to them.  I loaded my drinks into the little cooler and asked about ice.  They only had 10 pound bags, many times as big as I needed for the little cooler.  She said it would be fine to fill it with ice from the drink machine.  Again, a nice encounter with the youth of today.

I arrived at the FIRM to meet up with the many friends I have made over the years.  That part was a lot of fun as I got to catch up.

Run groups were set with my class running first, working third.  I took my four runs and was slow compared to what I had been running before the layoff.  But it was fun.

Our session ended and we had the second run time to relax and sit around.  I rode to a convenience store with my friend, Tim Friedl in his new Miata.  It was a fine machine.  When we got back I set up my chair in the shade and watched some runs.  Because the first group took so long, I thought I would time how long between starts.  Because the course was set up with a loop near the start, and cars were sharing a part of the track just 15 or so seconds into the runs, they were letting that section clear before starting cars.  That led to an average of 40 to 45 seconds between starts instead of the usual 25 or so.  With 98 drivers, that 20 second increase in four runs added a full two hours to the event.  And it was very hot.

When the third run started, it was easily 92 degrees and sunny.  My job assignment was to manage the grid, making sure cars were at the start without delay.  This put me standing on hot asphat for over two hours.  Because I had forgotten to bring my sunglasses, the brightness was an issue too as my old eyes got burned.  I asked one of the drivers if he had sunscreen for my burning legs and was offered that to help.

By the end, I was exhausted.  I saw Tim and he told me that he had to leave his work post early as he was almost passing out and his new knee replacement was hurting.  It was 5:00.  After arriving at 8:00, that was 9 hours.

I could have spent that time riding a scooter from here to Cedar Key, having lunch on the water, and riding home, enjoying every minute.  Instead, I had four fun runs and 8 hours of a grueling mess.  It will be a while before I return.

For the return, I will look for a good location, low turnout and cool weather.  I love the driving and don't mind being there into the early afternoon.  But this one was so hot and long that it was dangerous for the older guys. 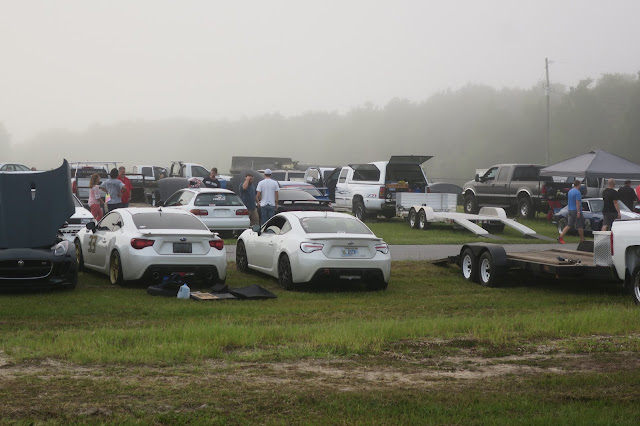 Early morning and the cars were ready to race. 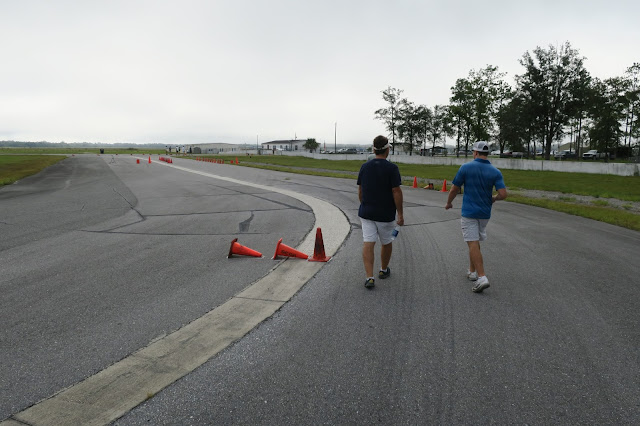 Walking the course with Drew and Sean 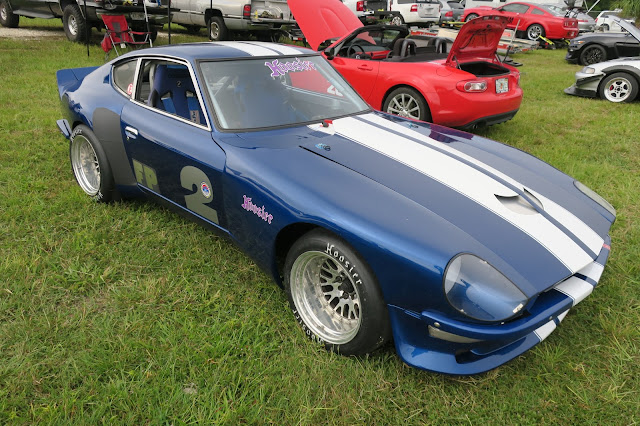 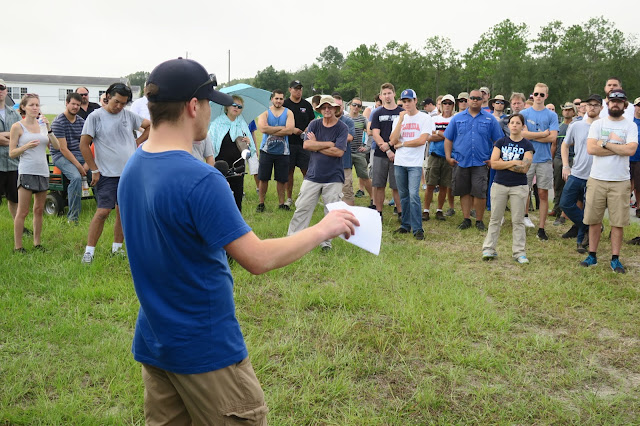 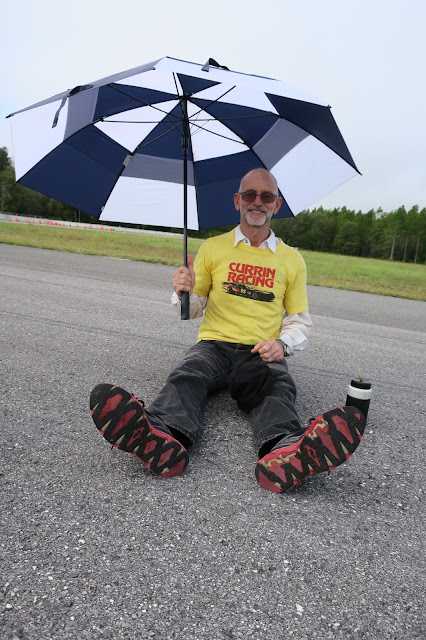 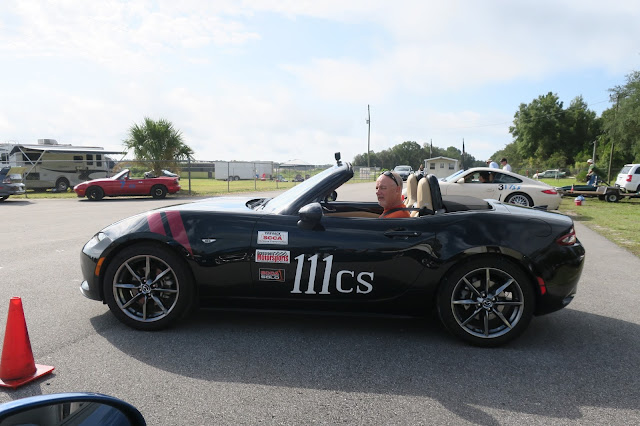 Tim and his new Miata 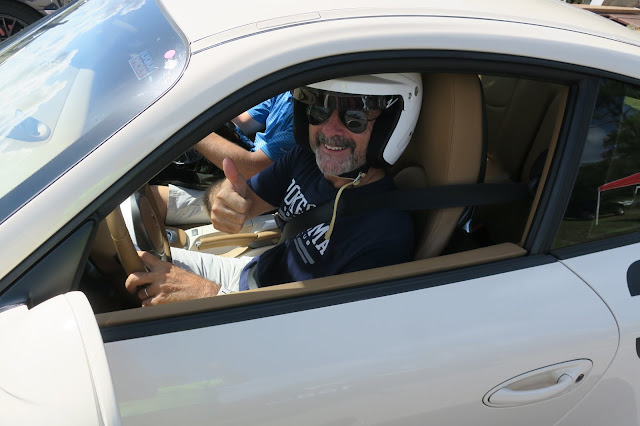 Drew in his Porsche 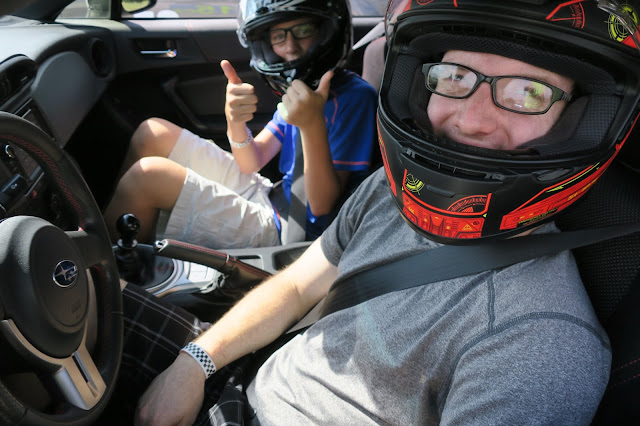 And Adam Neylans ready to kick butt in his BRZ.  Adam is a lot like Sam.  I am looking forward to some motorcycle rides with him in the future.

Posted by Bill Leuthold at 9:24 AM