After gathering with all of the riders in Pontedera, the entire group headed out to Elba to begin our adventure.

It started with a visit to the Piaggio Museum in Pontedera, where we checked out the displays of vintage Vespas.  Then the ride began.

It was nearly 100 miles for the day with a run to the ferry in Piombino.

Al and Doug, the leader a assistant, use a group riding technique that they got from Jim, a usual participant who opted out this year.  The technique uses a "Marker" at every turn in the route.  The marker is the second in line.  The leader points to a position in the turn for the marker to stop and direct the other riders to the direction of the pack. The marker waits for the last rider, where they rejoin in the next to last position.  Then gradually move up to the number two and mark again.  It is a very efficient system that allows the pack to keep moving even when broken up by traffic or lights. Everyone arrives at the destination, maybe 15 minutes from first to last.

We rode through some terrific Tuscan scenery before a big lunch along the way.  Then made the ferry for the one hour passage to Portoferraio.  We arrived safely and everyone enjoyed some rest before dinner.  Sarah and I ate at the hotel with Ken, Vicki, Walt and Hellen.

The morning saw us gather again for breakfast at the hotel, then Ken, Walt, Sarah and I headed out to see Elba.  It is a beautiful island with mountains and rocky coastlines.  There wasn't a straight road for more than a half a kilometer on the entire place.  I like that.  Ken took us up some very narrow, twisty roads, one where the pavement stopped to become dirt only.  Fortunately we turned back there, as riding a big Tmax with Sarah on the back limited our mobility.

We stopped a lot to enjoy the views and had lunch at a beachfront restaurant.  The place caters to German tourists.  The menu was in Italian and German.

We rode some more and ended up at Napoleon's villa, where he was exiled for a year in 1814.  It was an interesting house with a huge lower gathering area and a tiny house on top.

Then Sarah and I rode into Portoferraio to see the historic town.  We walked around the port and had a drink.

We ended the day with dinner with Mark at the Tennis Club.  I had crab pasta that was tasty, but the crabs were very difficult to remove from the shell.  I ultimately gave up. 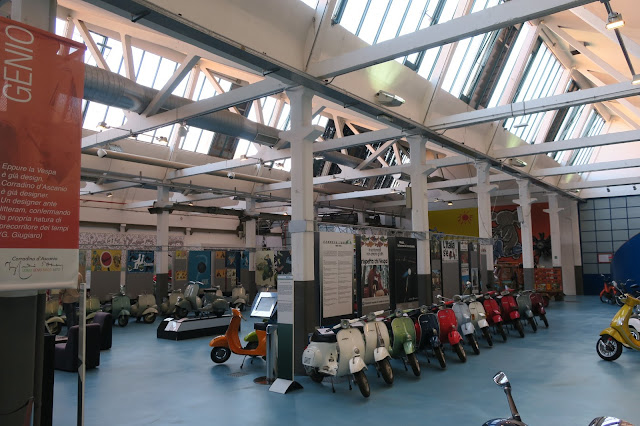 The Piaggio Museum in Pontedera 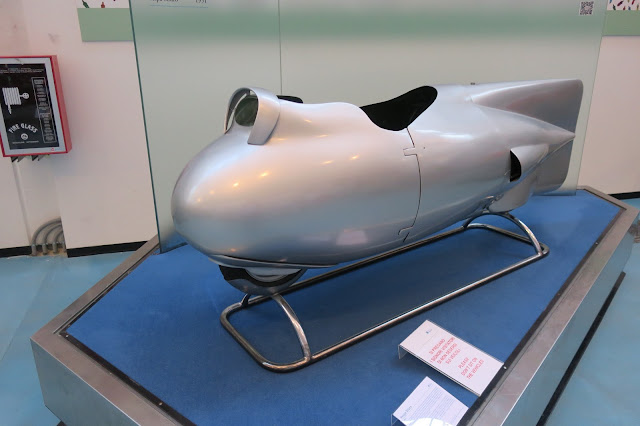 The one I would love to own.  Talk about a rocket. 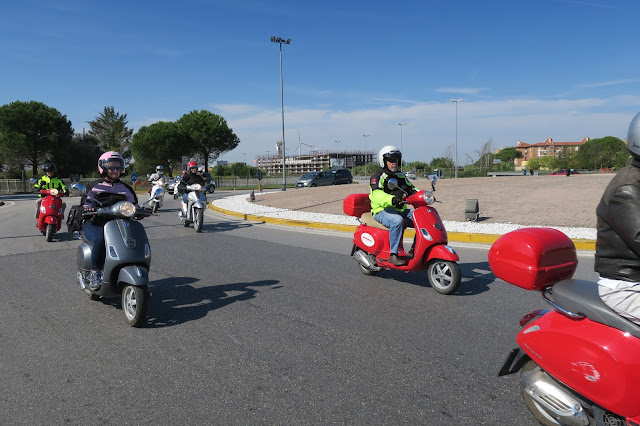 A photo of the riders passing while we were the marker. 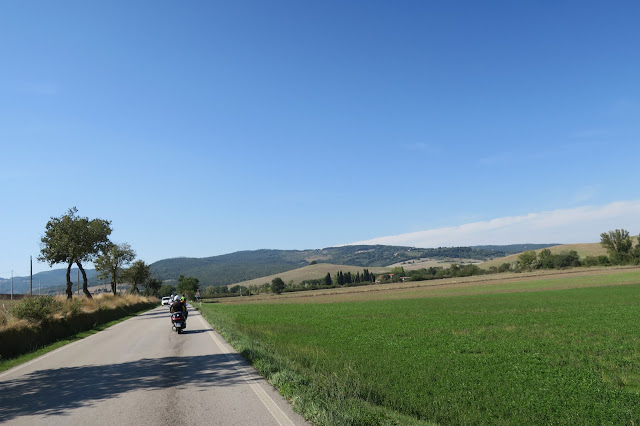 Riding through Tuscany is not bad at all. 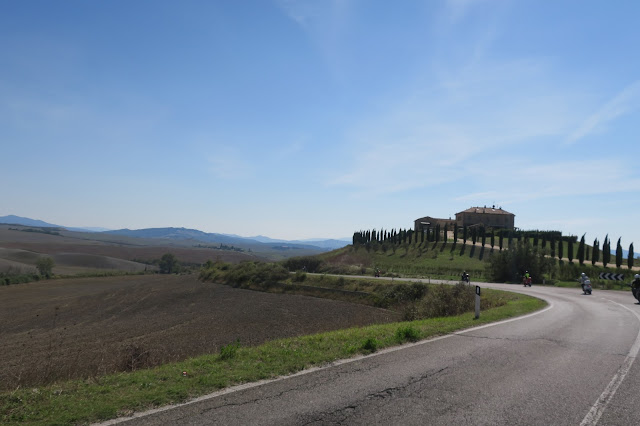 A view from the ride. 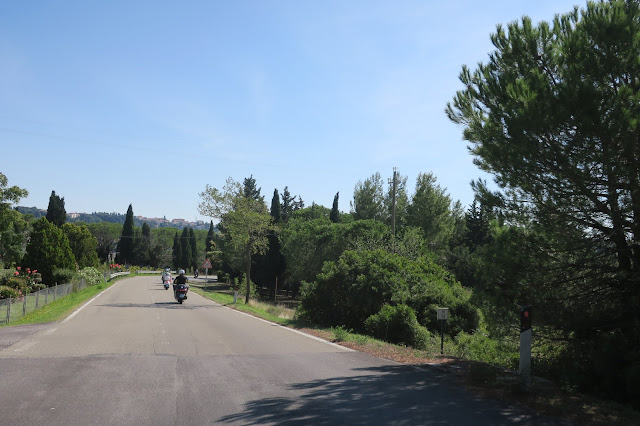 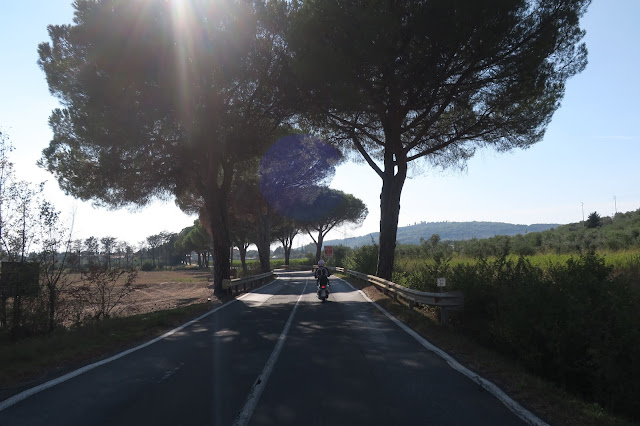 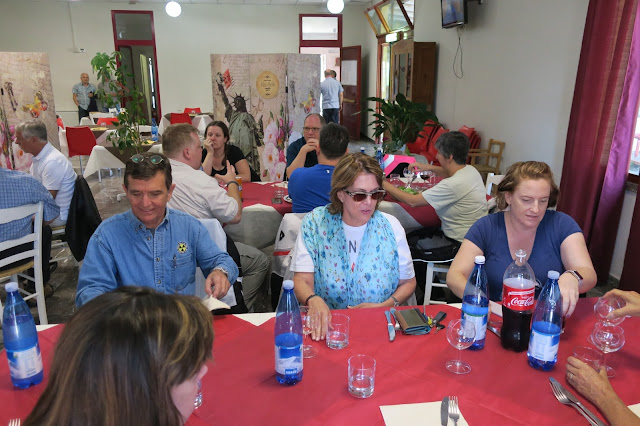 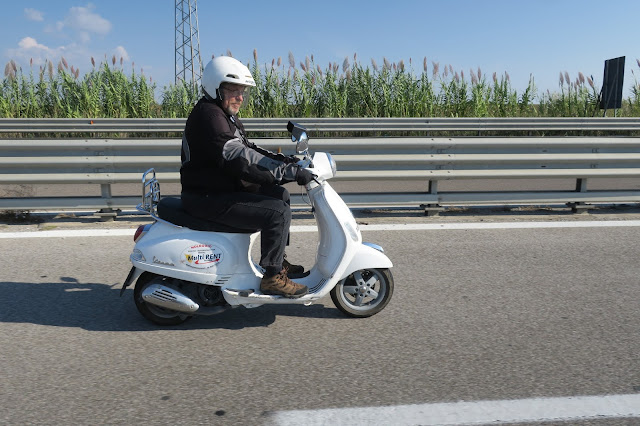 Lostboater (Ken) on his little LX 125 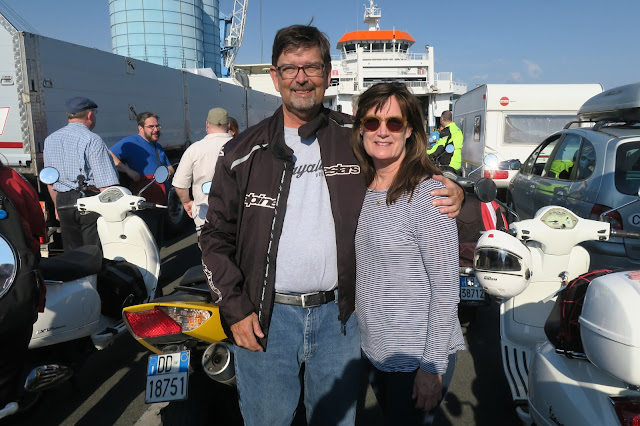 We made it to the ferry with minutes to spare. 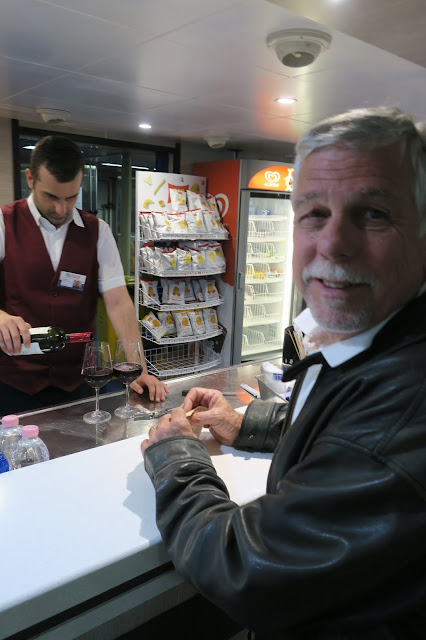 Being on the ferry is always a good excuse to have a drink.  Walt here. 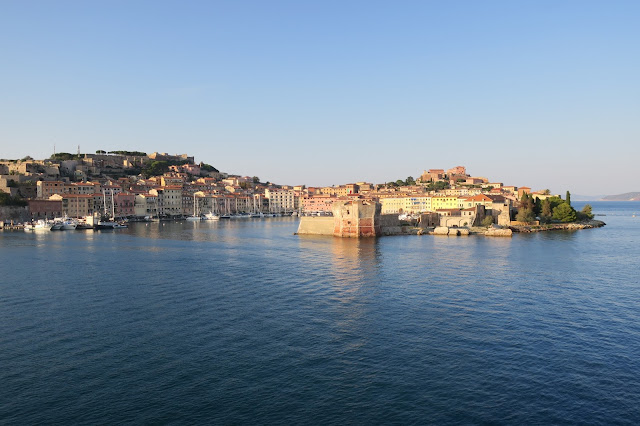 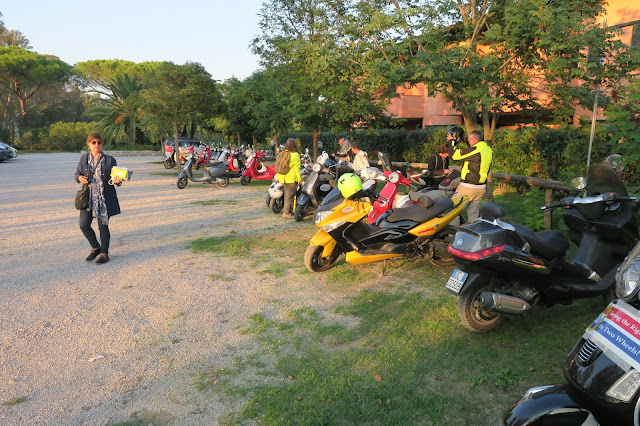 Scooters gathered at the hotel. 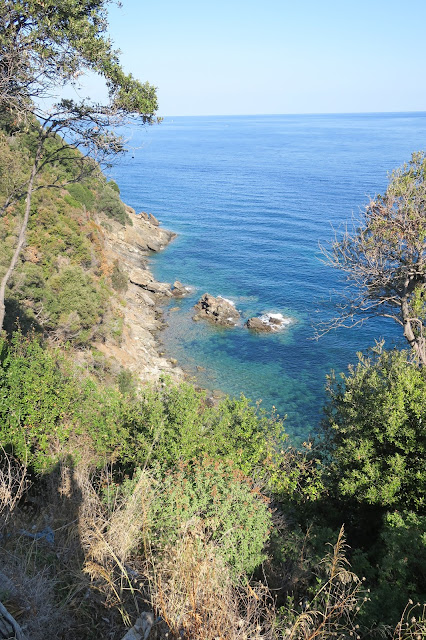 A view of the crystal clear water surrounding Elba. 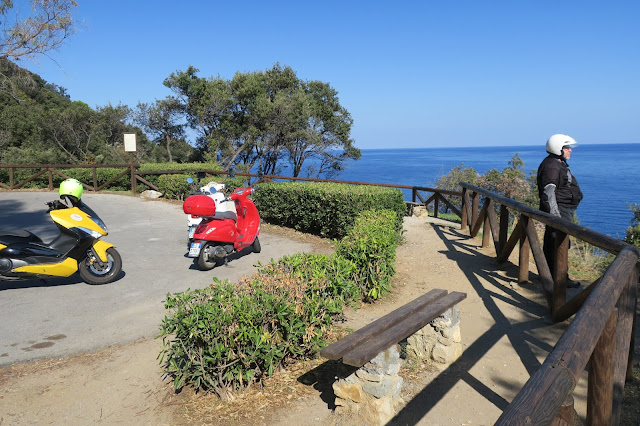 One of our many stops to admire the views. 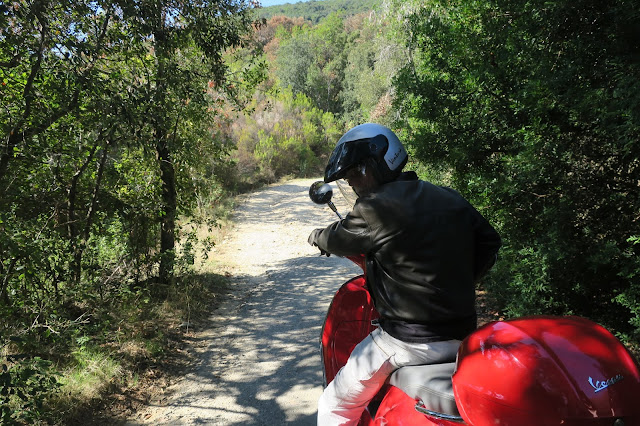 Walt where the pavement stopped.  We smartly turned back. 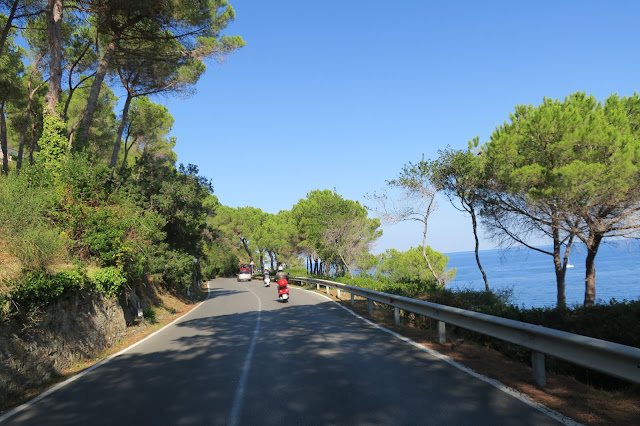 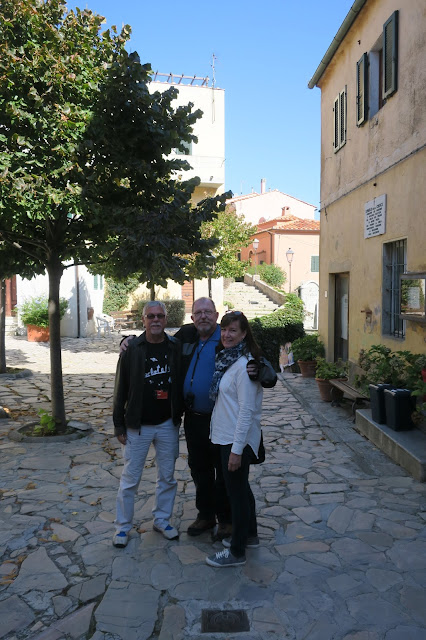 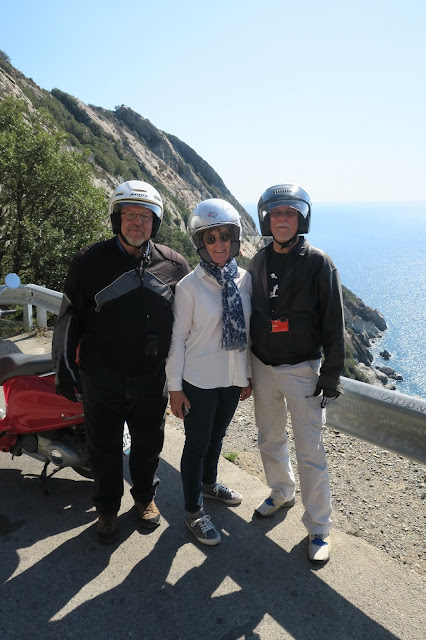 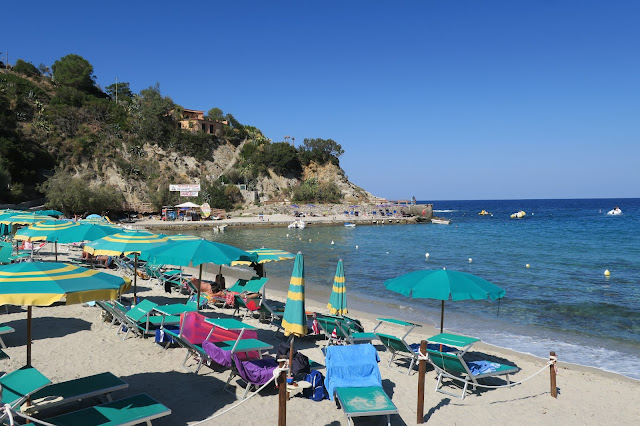 The view of the beach at our lunch restaurant. 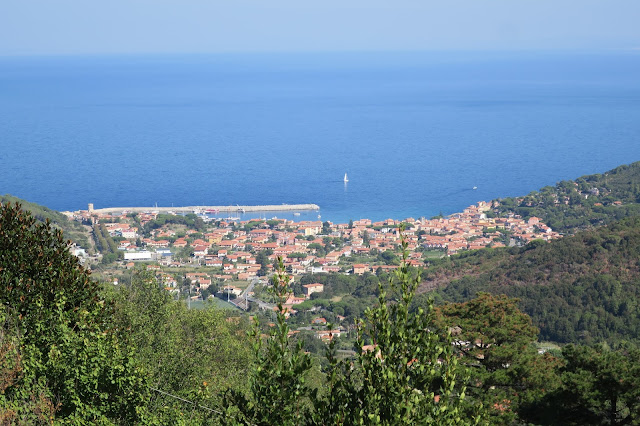 A view from one of the high spots. 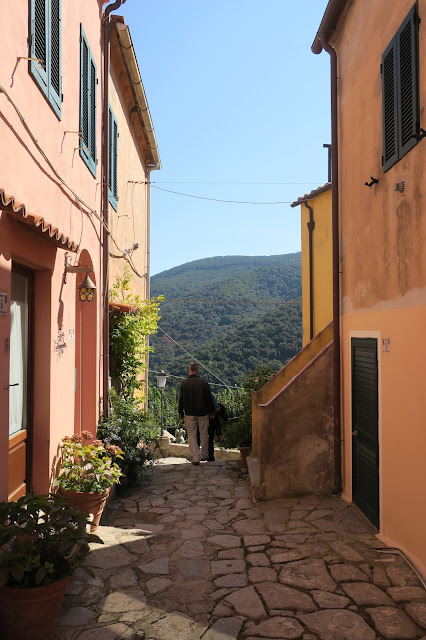 And in one of the towns. 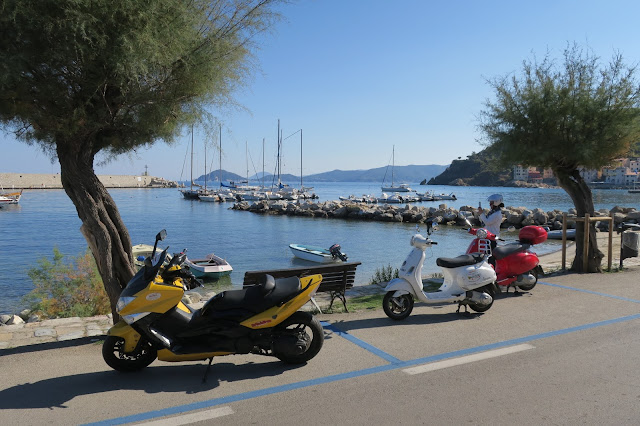 Our three scooters.  Sarah and I were on the sporty Tmax. 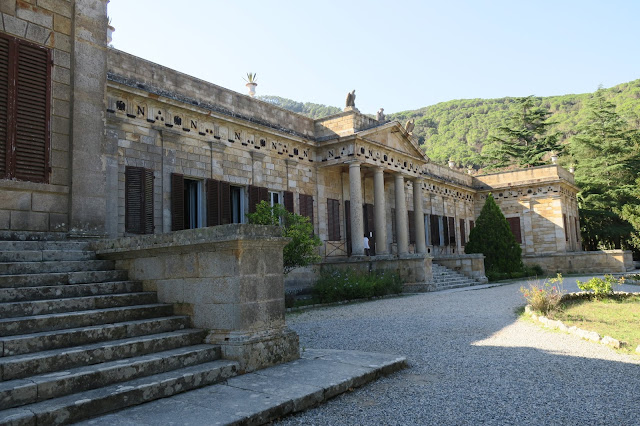 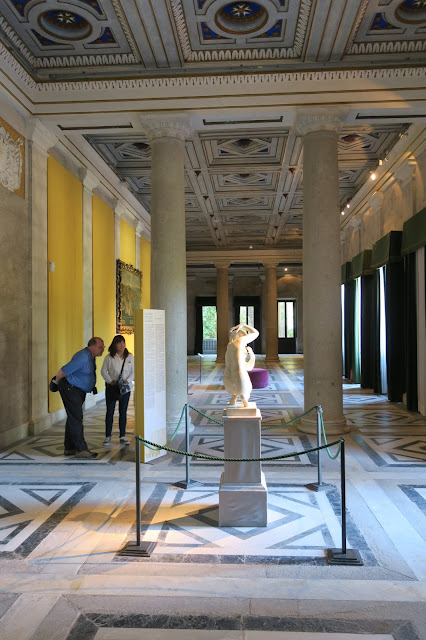 Inside the grand gathering space. 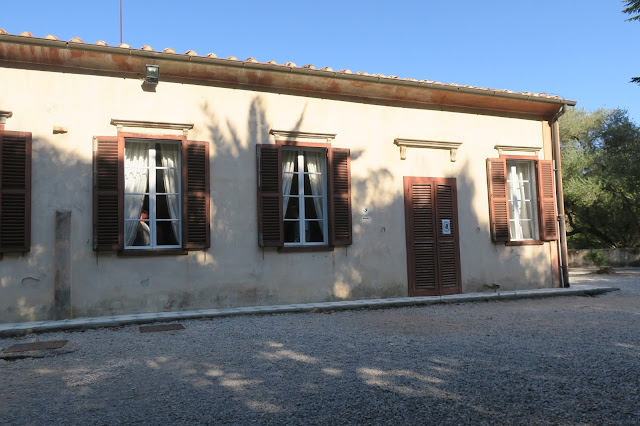 The little house on top. 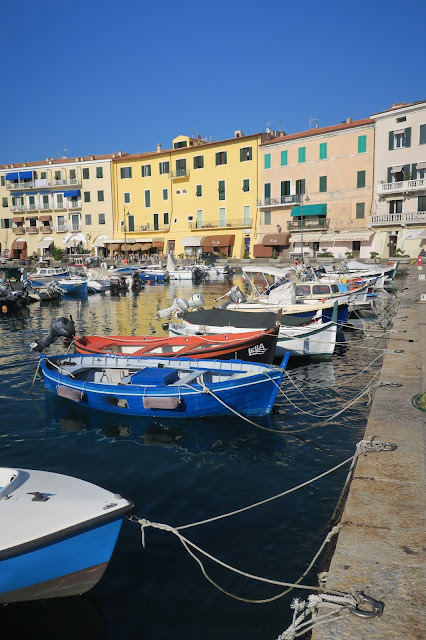 The marina at Portoferraio