Ken let me know a month ago that he wanted to take another canoe trip, this time on the Peace River near Arcadia, Florida.

We have been on two similar outings in the last two years, Fisheating Creek, near Lake Okeechobee in 2016, then the Santa Fe River near Hi Springs, Florida last year.  Both were such fun that we were all excited about doing it again.

I worked until 9:00 on Wednesday, then headed south to find much traffic on US-17 through Orange Park and Green Cove Springs.  Traffic cleared as I got past the packed 16 turn and was clear to Palatka, where I picked up 19 through the Ocala National Forest.  This led through Umatilla, Eustis and Tavares.  In Groveland I picked up 33 that had north bound traffic backed up for miles.  Luckily I was going south.

I finally got onto the boring 27 into Avon Park to the Jacaranda Hotel, Ken's favorite and one of mine too.

There we met up with Jim and had dinner at 18 East, a restaurant across the street from the hotel.  18 East is a pleasant place, good food and service, the owner always comes around to say hello to Ken.  But this time they had inserted music.  The two man band was not good and, to make up for it, they were loud.  We dined and attempted conversation, enjoying the good food while wondering what the owner was thinking with the band.

Thursday we were up early and had breakfast at a small restaurant on the next block, then Jim and I followed Ken on a two lane ride to the Canoe Outpost to meet up with Celeste, Dave and Larry. After paying for the canoes and getting prepared, we loaded onto an old school bus for the ride to the park where we pushed off after the staff put the canoes into the river.

I had a kayak on the last two paddles, and after a few minutes I could see that I preferred those light, one-man boats to the long, cumbersome canoes.  My canoeing partner was Celeste, a skilled canoeist who helped keep us away from the shallow spots.

We faced a big headwind between turns on some of the straight parts of the river.  These made paddling a bit more difficult than usual, but going downstream made up for it.

The main activity for paddling the Peace River is to collect shark's teeth.  I don't know how they got there, there certainly aren't any sharks on the river anymore, but people were finding lots of them.  One young girl let us know that she had collected more than fifty.

It was all great until we decided to stop for a break.  The chosen beach was rather steep with the water a few feet deep just ten feet from the shore.  Because we didn't have enough shoreline to come in parallel with the beach. we tried straight in.  Celeste got out easily but when they pulled me up, the canoe tilted and my awkward, clumsy body went straight into the river.  With my Canon G9X camera.  It was a very cool camera for the two and a half years I had it.  It is now a short circuited mess, never to work again.

But that is life and we paddled further to the Outpost where we got on the scooters and went to lunch at the Oak Street Deli in Arcadia.  That was followed with ice cream from a shop across the street.  Arcadia is a bustling town compared to Avon Park, but it still struggles a bit.  The downtown hotel there was damaged by Hurricane Irma.  The ice cream shop was for sale, along with many of the other buildings, including a cool pink and white Victorian block.

I was chosen to lead the 46 mile ride back to Avon Park.  We all prefer two lane roads so I had Garmin help me pick one.  It had us riding 10 miles north on 17, then turning off onto Fish Branch Road.  As the road became more remote as we rode east, it suddenly became a dirt road filled with lots of turns.  I offered to turn back, but everyone was OK with pushing forward.  It was only maybe three or four miles of dirt, but I and the others enjoyed something different.  We got back onto the paved roads and were riding along when Ken blew past me.  Of course my racing instincts kicked in and I took off in pursuit.  We ran nearly wide open until we came to the first place where the other two would get lost, so we waited.  Ken gave me a hard time, called me a bad leader, leaving Jim and Celeste.  But I said that they wouldn't get lost because we didn't pass any places where they would have to make a decision.  They soon pulled up and off we went.

Back at the hotel, I was sitting by myself on the front entry to the Jacaranda when a Vespa 300GTS Super Sport pulled up.  I spoke with the rider, a nice fellow named Brian for a while.  Then Jim came down and I went to take a shower.  When I came down Brian was still there with Jim and Ken.  We went over to 18 East for a drink.  The band this time was jazz, with two guys playing instruments with no singing.  Much better.  Then we gathered Celeste for a Mexican dinner at the nearest Taqueria.  It included tacos, tamales and a shared quart of beer.

The ride home was quick as a storm was approaching.  I beat the rain and made it home at 11:30 after a four and a half hour ride.

All said, except for breaking my favorite camera, it was a very nice adventure. 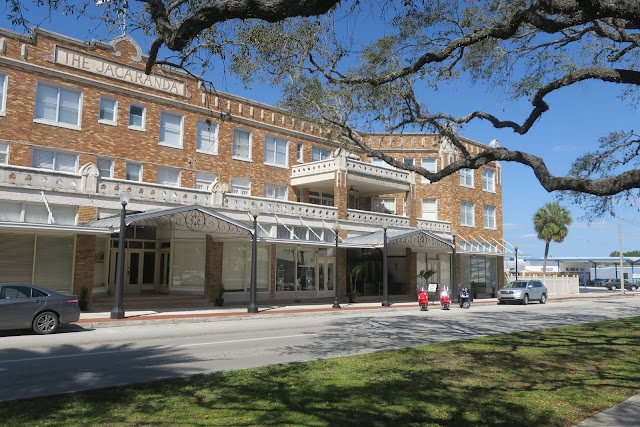 One of our favorite hotels, the Jacaranda in Avon Park. 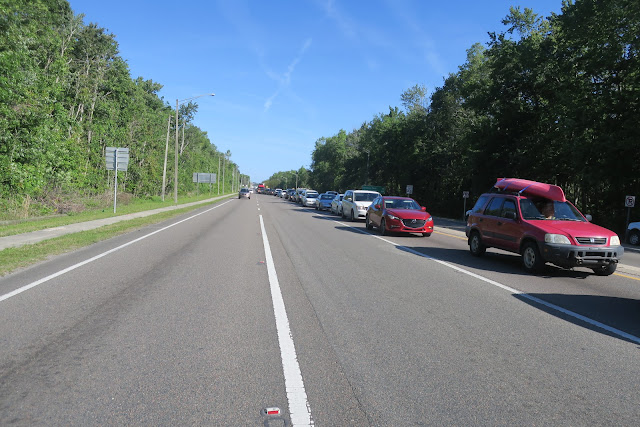 Traffic turning from 17 onto 16, south of Green Cove Springs 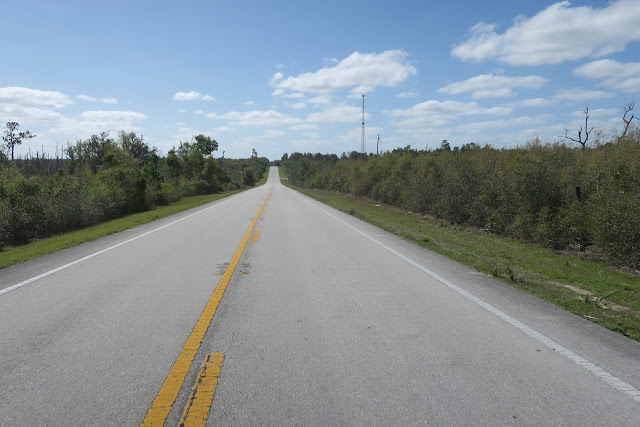 15 through the Ocala National Forest 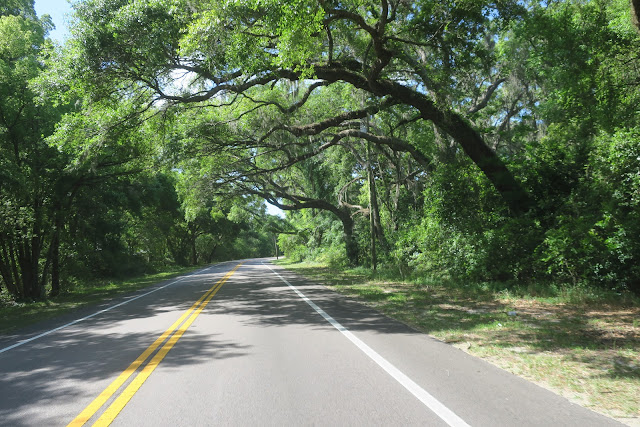 North of Altoona on 19 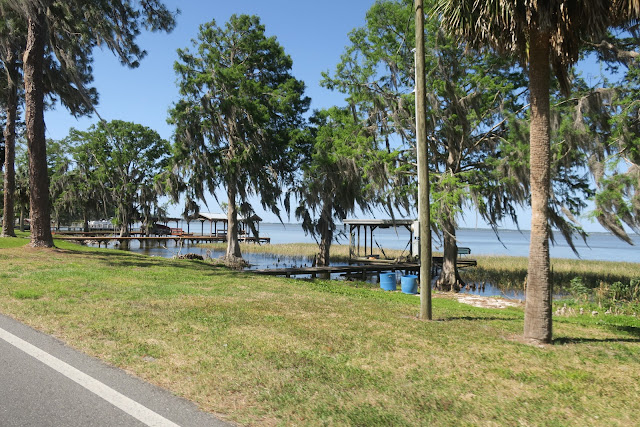 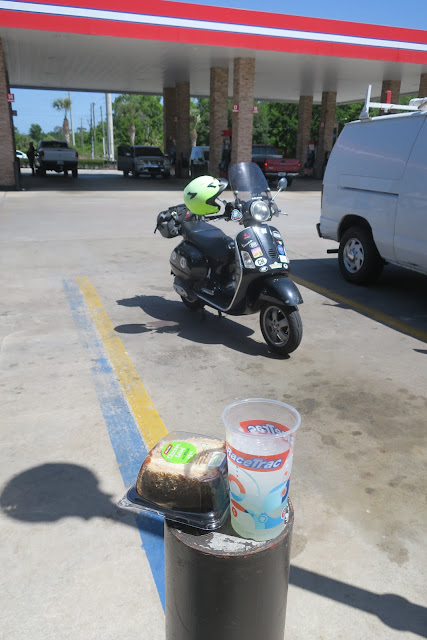 Gas and lunch at a Race Trac in Groveland 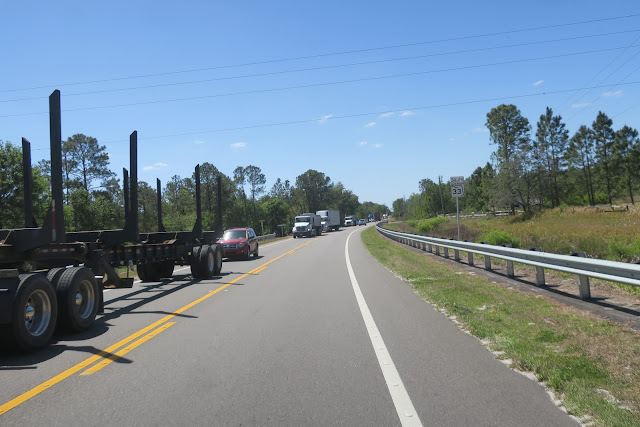 Northbound traffic on 33.  Luckily I was heading south. 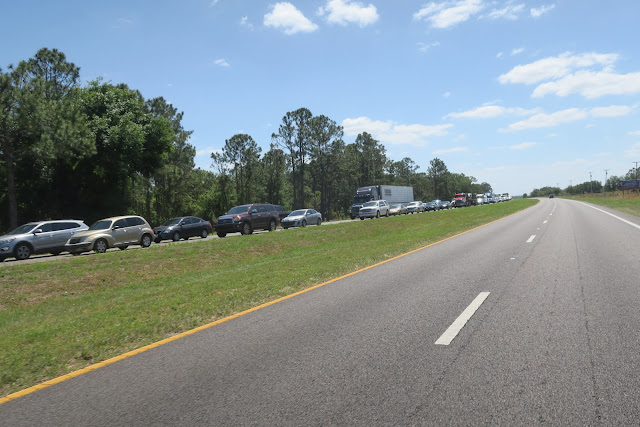 Traffic backed up on 27 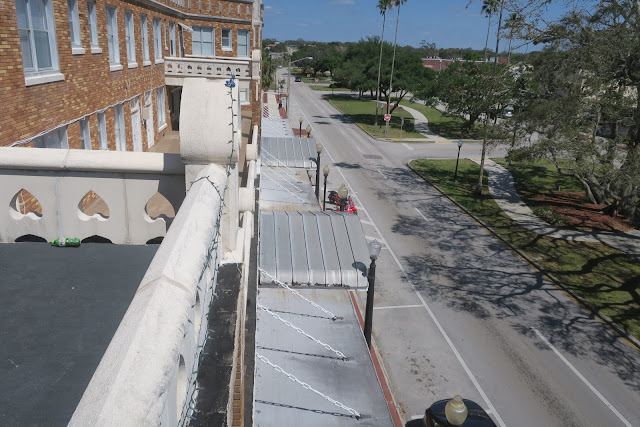 At the Jacaranda, looking at Avon Park from the balcony. 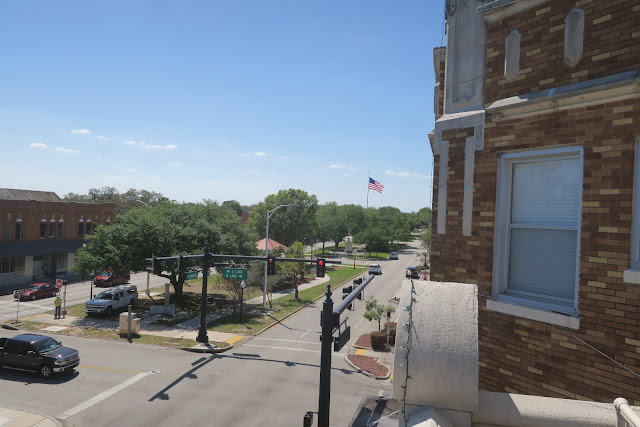 Facing west.  Deadest town anywhere, but we like it. 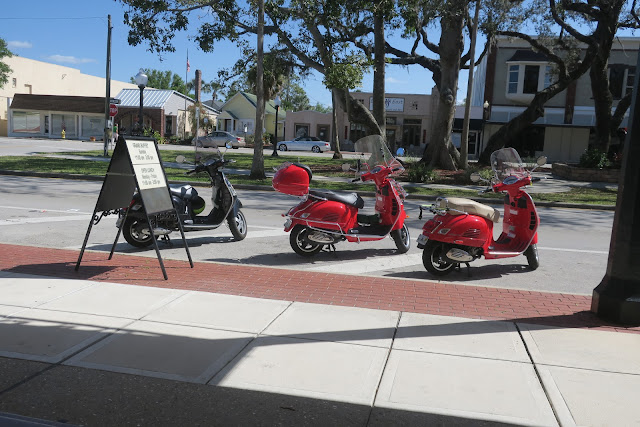 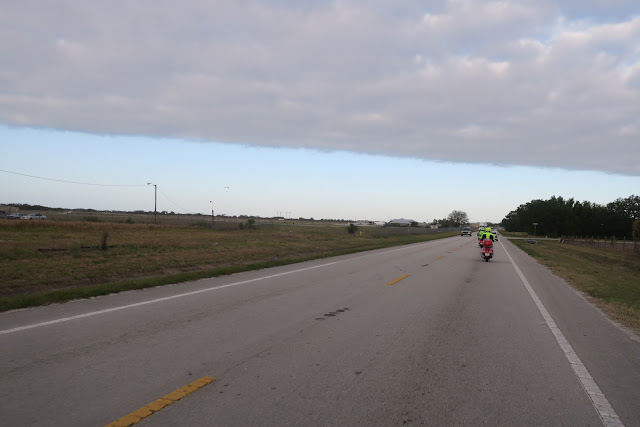 Heading west from Avon Park.  I liked the clouds and to the left is
someone flying a powered parachute 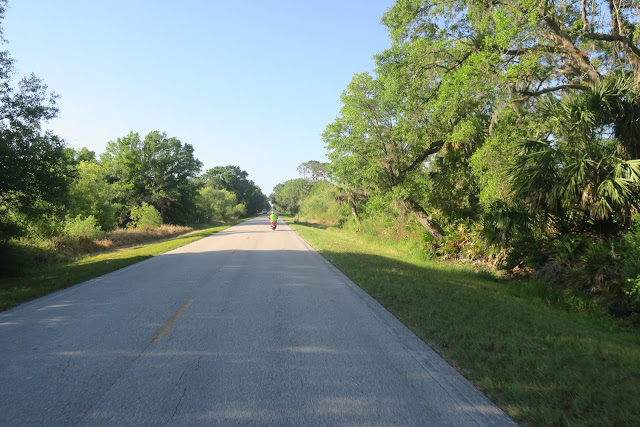 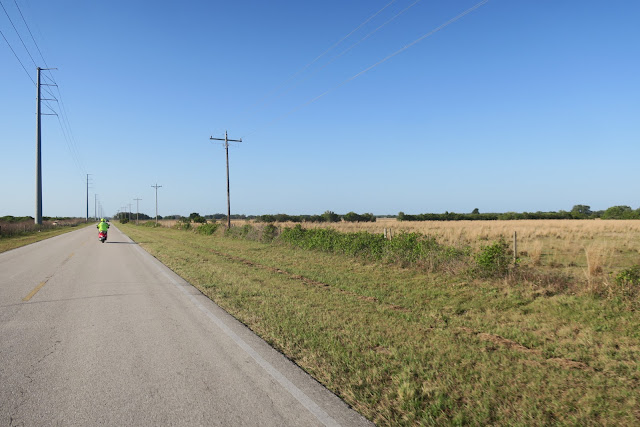 The Peace River from the Canoe Outpost 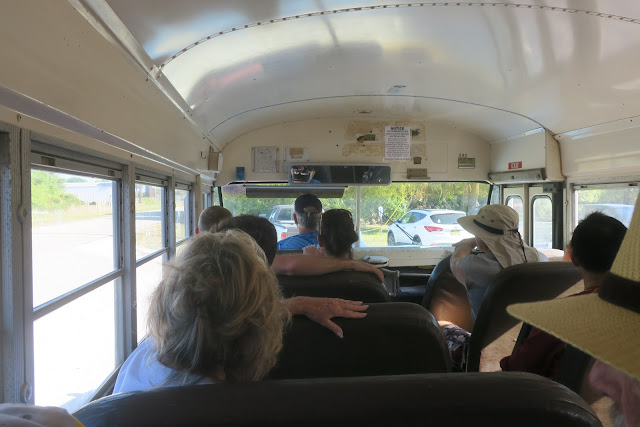 On the bus heading to the start. 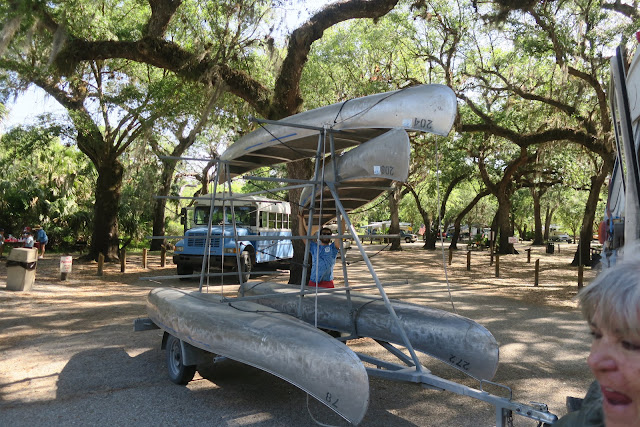 Canoes being off loaded, by the staff. 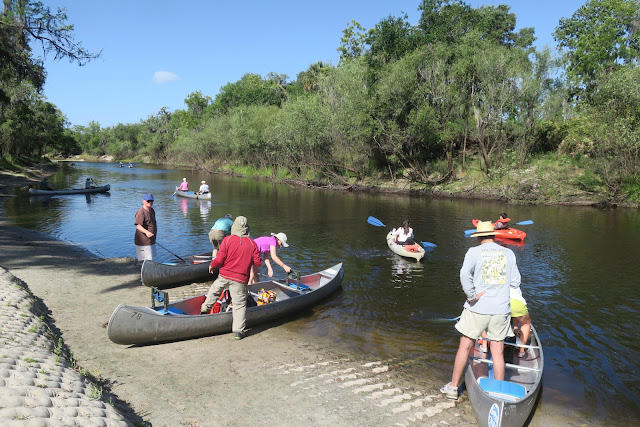 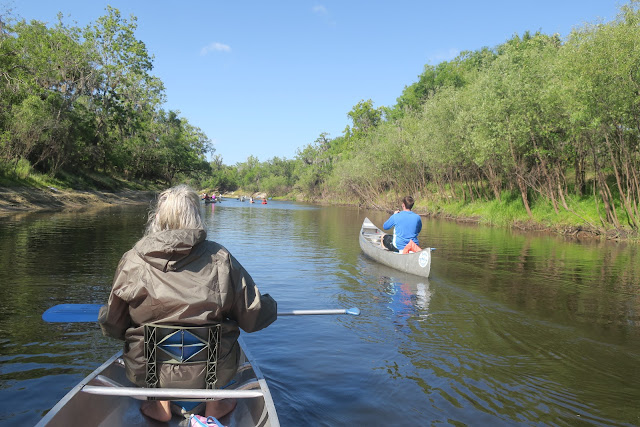 Celeste leading the way. She is a skilled canoeist. 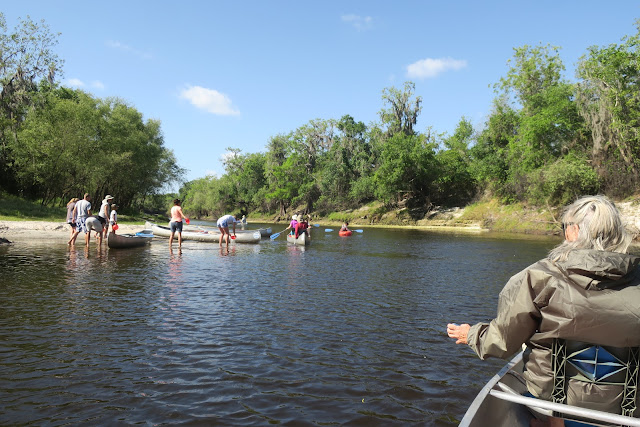 A group searching for shark's teeth. 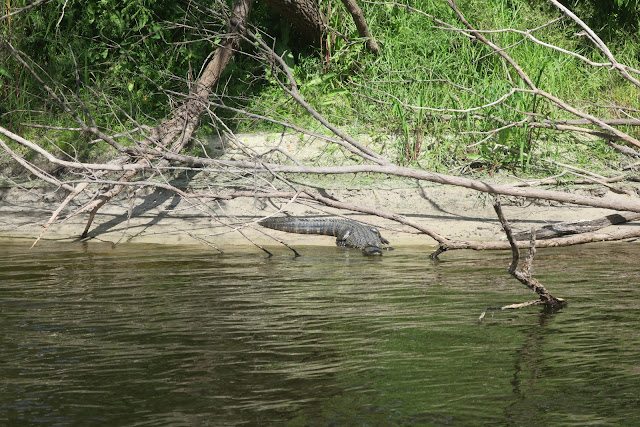 One of the five or so alligators along the way. 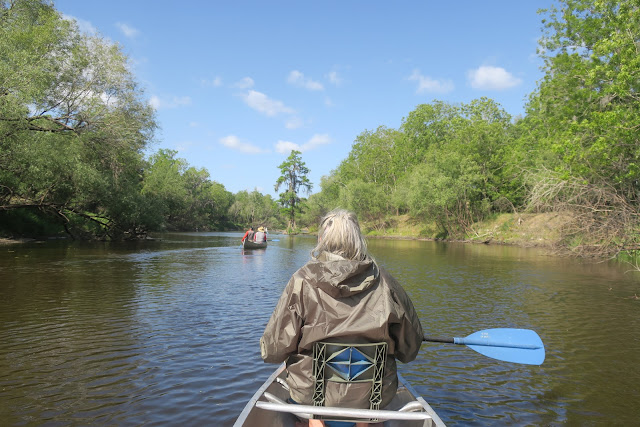 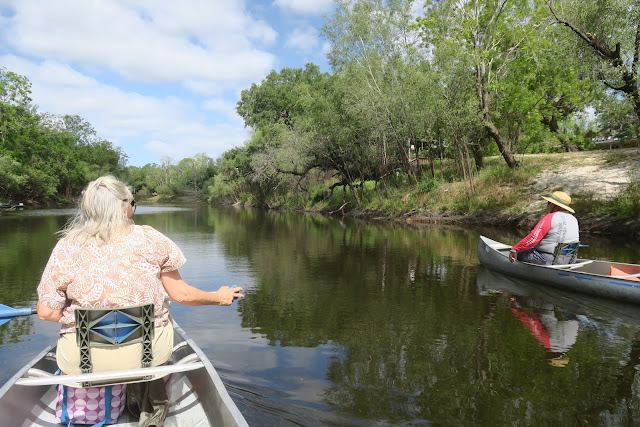 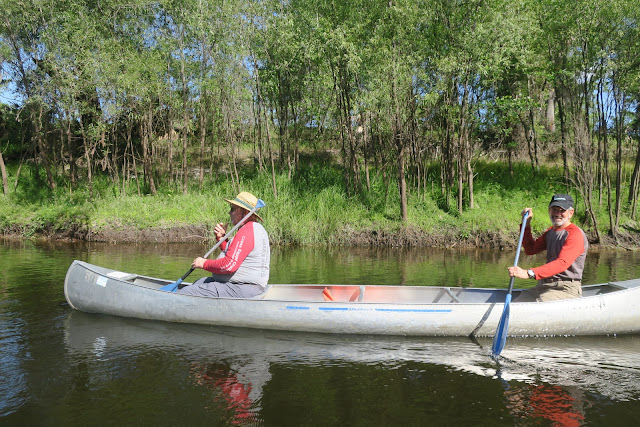 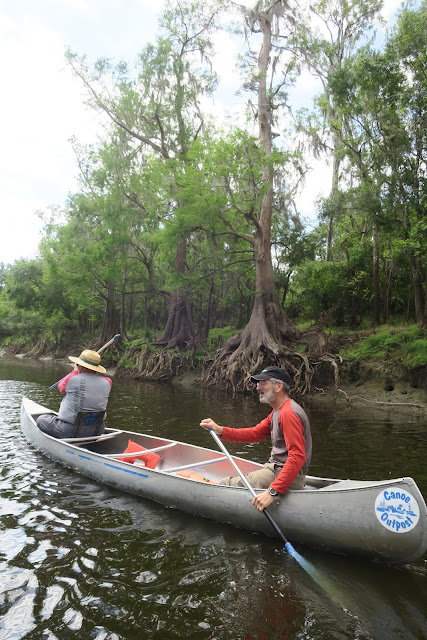 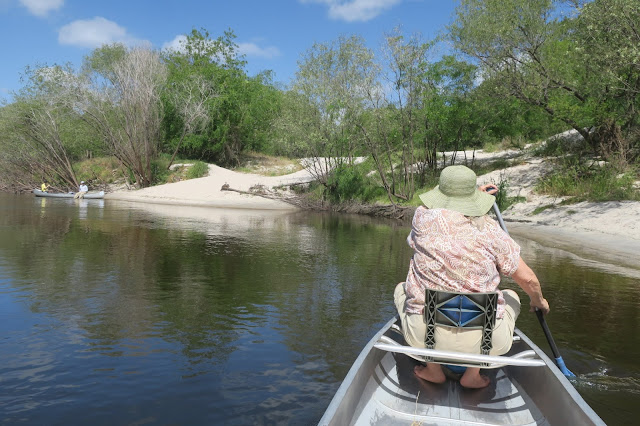 Sand beach along the way. 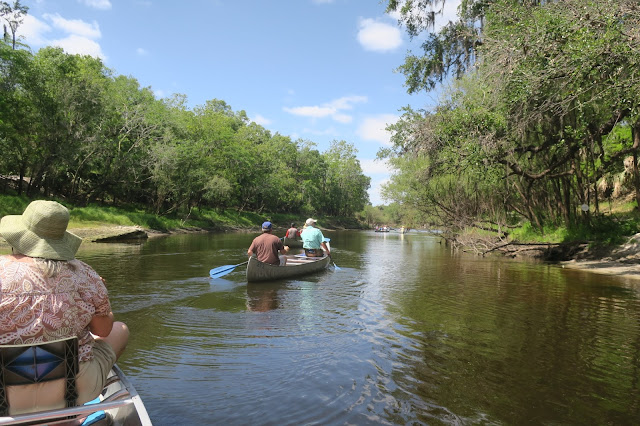 The Canon G9X's last photo.  It was a great camera, but I got
thousands of great photos.  Time for a new one 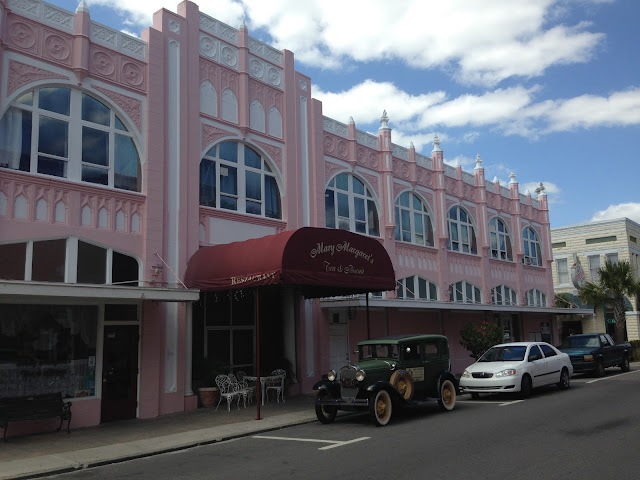 The Victorian block in Arcadia, taken with my phone. 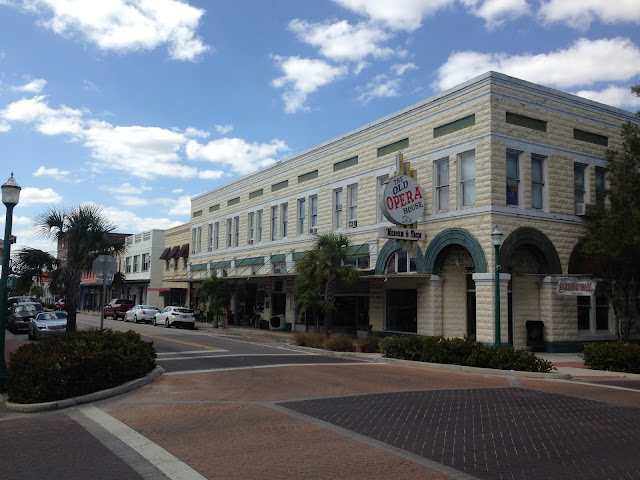 And the Arcadia Opera House.
Posted by Bill Leuthold at 5:13 PM