That is the 7 Bridges Scooter Club Rule Number Three.

At least my implementation of club rules.

The first two rules I established many years ago.

Those two are related to group rides.

They are Keep Up and Don't Complain.

They get broken all the time.

But the new rule, Don't Fall Off, has come into play only a very few times.

I did it once on a group ride in Alabama.

It happened this time to my good friend and fellow 7 Bridges Scooter Club member (actually the leader of the group, even though we have no officers.)

But last week he was headed to the weekly Tuesday club ride to dinner.  It was cold and he was under dressed.  About a mile into the ride he decided to turn around and head home for a bigger coat.

He chose the turn around location poorly as it had some sand that caused a wheel to slide out from under him.

He got up and figured a way for his old, broken body to stand the scooter upright .  He managed and it cranked easily.

Russ rode it home with a pain in his right hand.

A quick visit to a local care center showed a break and an appointment with an orthopedic surgeon.  Their more accurate cat scan showed a dislocation.

Surgery is planned for this week and Russ is not able to ride for months.

Don't fall off.  It ruins everything. 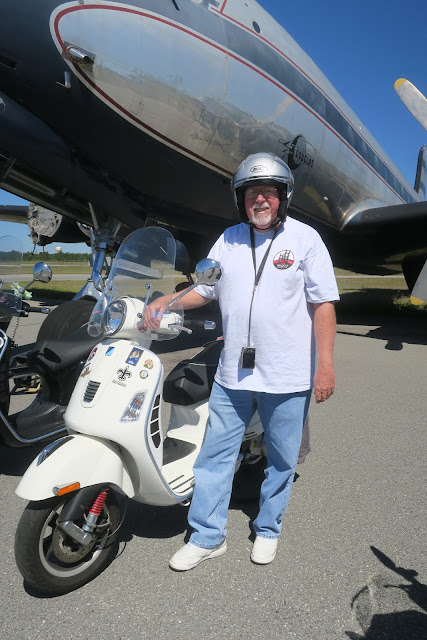 Russ in better days, in Douglas Georgia to look at airplanes.

Posted by Bill Leuthold at 6:07 PM